"In March 2013, an alarming rate of surface uplift for the past seven years and concentrated swarms of shallow earthquakes prompted the Observatorio Volcanológico de los Andes del Sur (OVDAS) to declare a yellow alert, signaling a potential eruption within months or years." (Singer et al., 2014)

Lagua del Maule - a supervolcano ?
The Laguna del Maule Volcanic Field, Chile, is a large, potentially hazardous caldera volcano, similar to other large calderas such as Long Valley, Yellowstone (both USA) or the Campi Flegrei (Italy), often referred to as "supervolcanoes" (mainly by sensationalist media, however).
Like the latter, Laguna del Maule has experienced giant volcanic eruptions ("super-volcano eruptions") in the past - approx. 1.5 and 1 million years ago - where hundreds or even thousands of cubic kilometer of magma were erupted.

When will the next super-volcano eruption occur?
No super-volcano eruption has occurred on the planet since the Oruanui Tuff eruption 26,500 years ago in New Zealand, but it is evident that sooner or later the earth will experience one again.
No doubt, an eruption of this scale, like any other rare catastrophic event (e.g. large meteorite impacts) would represent a continental or even global threat. Fortunately, the recurrance intervals of these events are so large that the likelihood of one occurring in any foreseeable future is very slim.
Nevertheless, they are obviously worth being studied in as much detail as possible. The so-called super-volcano eruptions are little understood, a reason more to dedicate research on them, and even more so when a candidate shows more than normal unrest, which is the case at Lagua del Maule.

Growing magma chamber beneath the lake - a unique possibility for science

The recent science paper in the journal GSA Today (s. a.) presents evidence that a large body of fluid, likely magma, is present at a depth of 5 km beneath the caldera and that this volume has been slowly increasing during the past years. How much of and whether this magma could erupt is not known.
The scientists'results do not allow to predict any eruption at a given time, but indicate that the volcano is likely to erupt again at some point, although it is impossible to predict if this is years or centuries from now.
The main conclusion of the presented paper is that the current episode of unrest gives science a "unique opportunity to investigate ... a large rhyolitic system while magma migration, reservoir growth, and crustal deformation are actively under way". (GSA)

The new paper presents and summarizes the results from a large international team of scientists who conducted recent (field) work at the volcano, in different geological and monitoring disciplines:

The Laguna's volcanic past

Laguna del Maule is an active volcano although it has not erupted for probably more than 2000 years. It sits on top of one of the most seismically and volcanically active subduction zones on the earth.
A large 23.5 × 16.5 km diameter lake-filled caldera was formed during catastrophic eruptions 1.5 and 1 million years ago.
In its more recent past, during the past 25,000 years (post-glacial time), the volcano has had an impressive sequence of at least 36 medium to large silicic eruptions, Singer and his colleages found when studying the preserved deposits: These eruptions were both explosive (producing ash and pumice layers that can be found in the Andes) and effusive (formation of lava domes and flows) and they originated from 24 vents located around the lake.
Combined, the eruptions of Laguna del Maule during the past 25,000 years produced approx. 13 cubic km of rhyolite, the author's calculations show.
The eruptions were clustered in two cycles of heightened activity. The latest volcanic activity occurred as recently as 2,000 years ago or even later. 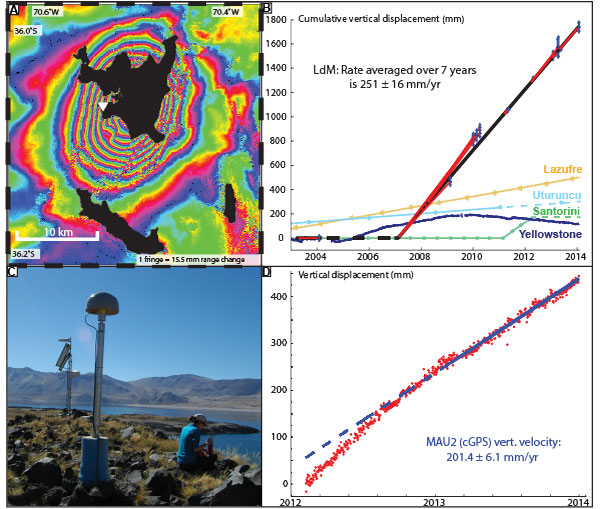 InSAR radar interferogram 14 Apr 2013 to 25 Jan 2014. One fringe denotes 15.5 mm of range change between satellite and ground. (Copyright: Singer et al., 2014)
The Laguna del Maule volcanic field is currently inflating at an exceptionally high rate of up to more than 25 cm per year. This period of rapid uplift began in 2004 and was detected using interferometric radar data as well as GPS.
The measured deformation could be explained by magma intruding into the volcano's magma chamber at approx. 5 km depth at a current rate of 0.03 cubic kilometers per year.

Highest ever recorded uplift rate (?)
"The rate of deformation at Laguna del Maule has been among the highest ever measured at a volcano that is not actively erupting", the authors write.
It has been known since Roman times (and is still far from understood) that large, active calderas can undergo periods of significant up- and downlift of the ground. An example is the Campi Flegrei caldera which in parts rose more than 2 meters in just 3 years between 1982-85!

How much are 0.03 cubic kilometers per year?
The current model of 0.03 cu km magma influx at Laguna del Maule is about 2 times that Santorini experienced during the crisis in 2011-12 (when a magma intrusion occurred in the caldera, but was not followed by an eruption), the authors add as comparison.
To add more: 0.03 cu kilometers are 30 million cubic meters. It is about a tenth of the volume of magma that Mt. St. Helens erupted in 1980. During the (ongoing) eruption in Iceland, Bardarbunga has been erupting about the same volume of lava EACH day! For a supervolcano scenario coming up soon (as most press articles seem to suggest), roughly  10 years of this magma influx seems tiny, not taking into account that only a small (typically around 10%) of magma intruded at depth is potentially able to erupt to the surface.
In comparison, the long-term average derived from a total of estimated 13 cu km of magma output over 25,000 years would be 0,5 million cu meters a year. 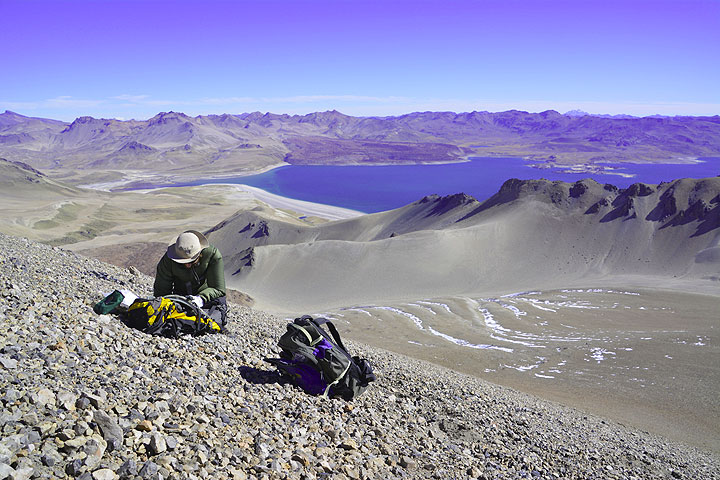 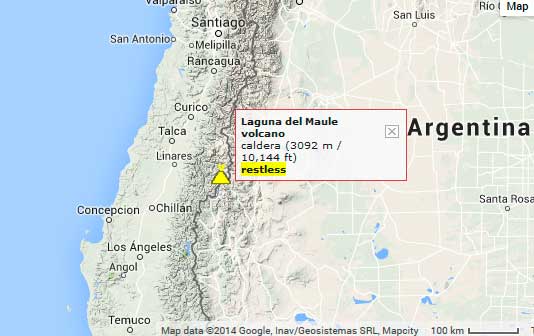 Other parameters fit into the picture

Other parameters the scientists measured gave results that fit into the emerging picture that currently, a shallow reservoir of magma is filling up at approx. 5 km depth beneath the lake.
One includes studies on the electrical resistivity of crustal rocks, which is sensitive to temperature, fluid content, and the degree of hydrothermal alteration. A zone of low resistivity was found under the western half of Laguna del Maule at a depth of ~5 km below the surface. This feature likely represents a magma body and an associated hydrothermal system.
Measurements of the gravimetric field also show similar results that match the hypothesis of a developing magma chamber.

Last, but not least, seismic monitoring is an essential tool to judge the actual state of a volcanic system. While nothing alarming is occurring right now, the characteristics of the seismic activity beneath the lake are clearly volcanic and show that the Laguna del Maule is an active volcanic system.
Most earthquakes recorded near Laguna del Maule are shallower than 5 km and occur beneath the youngest volcanic centers (Nieblas and Barrancas rhyolite vents), along the margins of the uplifting region.

Earthquake swarm on 11–12 January 2013
During 11-12 January 2013, a swarm of 240 shallow earthquakes in an area 9 km SW of the lake was detected. It could well have been the result of a magmatic intrusion, the authors think.

Hypothesized magmatic system feeding the crystal-poor rhyolitic eruptions encircling Laguna del Maule (adapted from Hildreth, 2004). Section is SW-NE along bent line in Figure 1B. Observations support inferences shown here, including: (1) rapid uplift, (2) shallow earthquakes, (3) active intrusion of mafic magma at 5 km depth, and (4) normal faulting and geodetic data that record extension. (copyright: Singer et al., 2014)
The findings of the studies led to suggest the following model: a magma chamber at approx. 5 km depth consists of crystal-poor (eruptible), rhyolitic magma that segregated from an extensive crystal-rich (non-eruptible) mush zone that had become established beneath much of the basin by ca. 20 ka. This magma chamber fed the eruptions during the past 20,000 years.
It is unclear how the currently inferred influx of hotter magma from deeper sources interacts with the shallow magma chamber described above.

Singer et al. estimate that on average the volcano has had one eruption every 1000 years. At the moment, it is showing signs of unrest and undergoing an active phase of magma supply, at the (very modest) rate of 0.03 km3 / year. Does this mean an eruption is imminent? No, but it might be slowly building up towards one.

The findings suggest that Laguna del Maule's magma chamber seems to have a flat, disk-shaped form under the caldera, which could help explain why most eruptions formed at its margins. Its volume is estimated to be at least 100 cubic km, but likely several times more.
While this volume is in the super-volcano range, one should remember, though, that it comprises both melt and mush and that only a typically small fraction of it has the potential to erupt.

When will be the next eruption?
The scientists do not make any prediction for the volcano's future, but nothing would be surprising if another eruption of small to moderate or even large size occurred at some point in the medium to long-term future (years to centuries).
Show more
Try our free app!

Private geology tour on Santorini
We offer you private geology tours to get to know the extraordinary geology and natural history of the island, but also aspects of the deep connection with its cultural history and archaeology.
Support us
If you find the website useful and would like to support us and help keep it alive and improve it, please consider making a small donation. Thank you!
Volcano Database