A small group from VolcanoDiscovery, local mountain guides and partners stayed near and on Lengai volcano during 17-21 January. During this period, Lengai continued to erupt ash during phases lasting several hours alternating with periods of quiet when only a weak plume of very fine gray ash and gas was issuing out of the new ash cone.

In the afternoon and early evening, the volcano appeared quiet.

After sunset, strong ash eruptions started with ash plumes reaching about 500-1000m above the volcano. Strong lightning in the ash cloud occurred. After around 21h30, one of our group, Canadian park ranger Randle Robertson, observed a bright red-orange "blow-torch" rising from the summit crater to an estimated height of 500m above the crater. The bright candle was steady in appearance and lasted for at least 5 minutes (it had started before Randle left his tent). No ash plume above the candle developed while it was active. Its color and intensity increased bottom to near its top from dull red to bright orange, and no falling material could be seen. From the description it seems unlikely it was a lava fountain, although this would be the easiest explanation. Oberservations from the summit ridge on the following days revealed no obvious fresh spatter deposits that would be expected from a lava fountain, nor was there any lateral overspil of lava during the night. We therefore think it was a very intense - and very unusual - fountain of glowing or combusting gas. When the fountain died, a strong dark ash cloud started to flow out of the crater, with lightings in it, but not developing great height.

18 January: climb to the summit, moderate ash eruptions in the evening / night 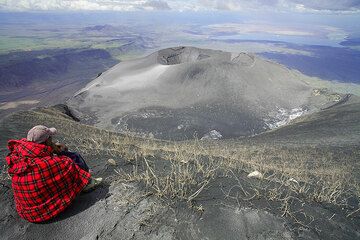 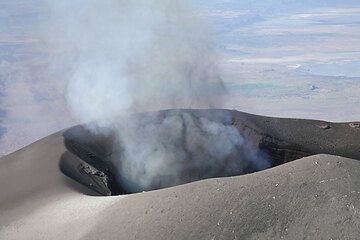 Just before the onset of an eruptive phase, note the presence of blue gas (probably SO2) 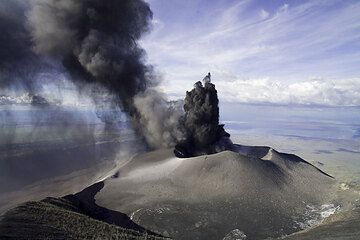 Ash eruptions on the evening of Jan 19
The volcano was more or less quiet during most of the day or its activity could not be observed, since we spent much of the afternoon climbing the volcano from the south side, the old northern route being judged too dangerous. The S crater was reached after a strenous climb of less than 3 for some and 6 hours for others. We buid a basic camp on the extreme SE corner of the S crater rim,- as far as possible from the active crater and closest to a possible escape route formed by the upper, less steep part of a prominent ridge along which we had climbed. No larger or fresh impacts are seen in this area, but the S crater is now a barren moonscape covered with recent ash with no living vegetation seen anywhere near.

The first to arrive on the top still managed to see weak ash explosions from the ash cone in the N crater. Fog prevented further observations later and during all night. In the middle of the night, loud detonations and hissing sounds were heard.

After the fog cleared at around 1pm, we found much of the SE part of the active crater, the dividing ridge between the N and S craters as well as the NE half of the inactive S crater covered with very recent impact blocks. The volcano is quiet most of the day, and emits only a very weak plume of fine ash and some vapour.

At around 4pm, weak explosions set in, increasing in intensity until the ash plumes reach about 500m above the crater at around 5:30. Blocks are ejected to up to 300-400 m above the crater, but fortunately, all explosions are near vertical jets from two vents in the W and central portion of the crater. Activity decreases after sunset. No incandescence can be observed during the night, until fog prevents further observations after around 8pm, lasting until the afternoon of the next day.

However, activity during the night was probably intense again, since we were woken up again by very loud explosion sounds, detonations probably coming from lightnings in the eruption clouds, and the hissing sound of gas and ash jets. Not detecting any sounds of near impacts and the prevailing thick fog alternating with rain showers let us decide to stay at the spot rather than risking an emergency escape.

We decended along the same route, while the summit remained in clouds all day. Occasionally, billowing black ash coulds made their way through the white clouds to indicate that the volcano continued its ash eruptions. After around 3pm, no such signs of activity could be seen any more. During the evening and night, the could cover gradually decreased, eventually giving free sight again, but Lengai remained completely quiet, except for short phases of very weak ash emissions from time to time.

During the night, morning and until until we lost Lengai out of sight at around 4pm leaving the area, no further activity was seen.
First visit to our site? If you havn't done it yet, download the Volcanoes & Earthquakes app to get one of the fastest volcano news online:
Android | IOS
Try our free app!

Vanuatu Volcano Tours
One of the most exciting volcano travel destinations in the world! On our adventurous expeditions, you will get close to active lava lakes on Ambrym Island and the spectacular fireworks of Yasur volcano on Tanna Island.
Popo Special

Popocatépetl Volcano Special
The activity of Mexico's most active and largest volcano has been picking up gradually during the past months. If you like to join a small group of volcano enthusiasts, join us, stay 5 nights near the volcano and move around for extended day- and night-time observation.
Short tours

1-3 day excursions
If you're interested in volcanoes, there are a number of excursions you should not miss if you're in the area: hike to the craters of Stromboli volcano, climb Etna volcano, get to know the unique volcanic history of Santorini - some examples of shorter (1-3 days) tours and excursions we offer.
Etna

Etna volcano photos
Etna - Europe's largest and most active volcano is a universe in itself. Browse through our collection spanning almost 20 years of eruptions and more.
Earthquake Catalog

Quakes by country or region
Look up earthquakes in your country, region or state!
Get the ad-free version!
Why is there advertising on this site?