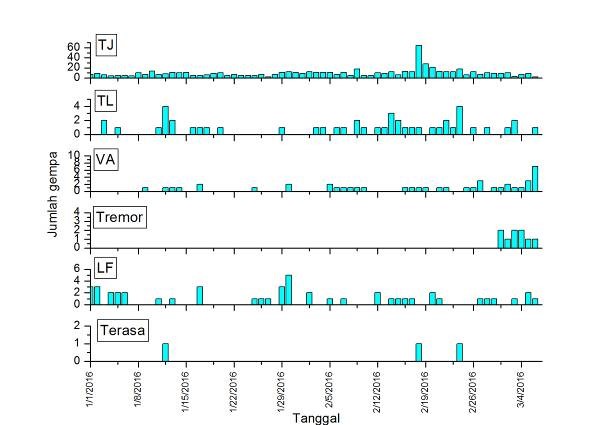 Seismic activity of Kie Besi volcano (Makian) over the past weeks (VSI)
The alert level of Makian Island's Kie Besi volcano was raised from 1 (normal) to 2 ("waspada" = watch) yesterday, as an increase in seismic activity has been detected recently under the volcano.
The stratovolcano, which forms a small island south of Ternate (and is in the center line of tomorrow's Solar Eclipse, where one of our groups is currently stationed...), is one of the regions most active (and dangerous) volcanoes with a number of strong explosive eruptions in historic times, last in 1988.
Already on 2 June 2009, a similar increase in internal activity had triggered a raise in alert level, but unrest declined soon after again and the volcano was placed back to normal again on 16 July, as no further changes in activity had been detected.

The current, most recent phase of unrest began apparently last year. A series of deep earthquakes could be felt in the region in November. Since January, the observatory noted an increase in the number and size of shallow volcanic earthquakes. Weakly felt quakes occurred on 12 January, as well as on 18 and 24 February. Long-period quakes and volcanic tremor (regular vibrations), both related to internal fluid movements also started to occur since the end of past February.
The volcano's seismic activity further increased during the past week and now volcanic tremor has been a weak, but constant signal since 7 March which is why the volcano's alert level was now raised.
So far, no signs of changes in the volcano's visible (surface) activity have been noted, in particular concerning the relatively weak fumarolic activity in the summit crater. However, volcanologists interpret the increased seismic activity and its characteristics as likely created by a magma intrusion from depth, and that fluids, possibly magma, have been moving closer to the surface, causing an increase in internal pressure, and, hence the risk of sudden explosions.
For now, no evacuations are recommended, but the local population is advised to stay alert of possible tremors that can be felt. It is apparently not expected that an eruption might occur in the near future, but increased vigilance is in place as things can change quickly at active volcanoes. Past eruptions of Makian have often produced pyroclastic flows and significant ballistic ejections that pose great risk to nearby areas, especially within a radius of 2 km.
For the time being, the local population on Makian island around G. Kie Besi volcano and visitors / tourists are advised not to climb the crater and remain outside a radius of 1.5 km from gunung Kie Besi's summit crater.
---
Links / Sources:

PVMBG reported that seismicity at Makian increased at the beginning of January and was characterized by deep volcanic earthquakes, low-frequency events, and tremor. Tremor amplitude increased at the beginning of March. Gas emissions did not change; weak solfatara emissions continued to rise from the crater floor. ... Read all
Wed, 15 Jul 2009, 06:00

CVGHM reported that on 16 July the Alert Level for Makian was lowered from 2 to 1 (on a scale of 1-4) because no visual changes or increased seismicity were noted. Residents and tourists were not permitted to climb Makian. ... Read all
Show more
Wed, 27 May 2009, 06:00

CVGHM reported that during 28 May-2 June seismicity from Makian increased, particularly the occurrence of tremor. Little, if any, increases in emissions were seen. The Alert level was raised to 2 (on a scale of 1-4). ... Read all
Wed, 22 Aug 2001, 06:00

VSI stated that last week's report of volcanic activity at Makian on 16 August was false. An observer mistook the glow from a bush fire as volcanic activity. ... Read all
Wed, 15 Aug 2001, 06:00

Island of Venus
Milos Island in Greece is one of the most beautiful and photogenic islands of the Mediterranean. Its boasts breathtaking scenery of colorful volcanic rocks, some of the finest beaches of the country, a rich archeological heritage, great hospitality and delicious local cuisine. Come join us to explore this magical island on a 6-days geological tour!
Italy
7-21 Oct 2022

Merapi volcano photos
One of the most active and most dangerous volcanoes of Indonesia: Merapi meaning "the one who makes fire", is a feared but also venerated holy mountain looming over the city of Yogyakarta, capital of Central Java.
Armenia

Photos from Armenia
Armenia is a very photogenic country with a large variety of landscapes showing some very spectacular geology, century-old monasteries and castles, and much more.
Ijen flames