Updated: Jul 6, 2022 12:16 GMT - Refresh
NASA scientists studying volcanic rocks from Mars came to the conclusion that the red planet´s volcano, Mount Olympus, is not dead or dormant but in fact an active volcano whose last eruption might have been as recent as a few years to decades ago.

Mt Olympus - the largest volcano of the Solar System 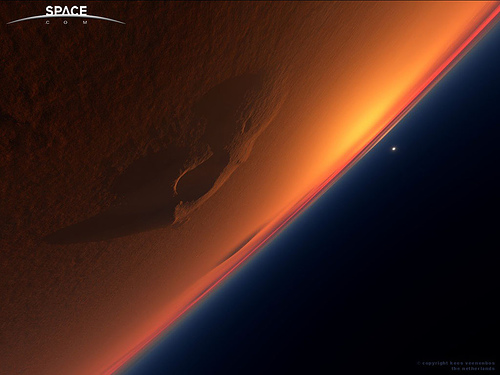 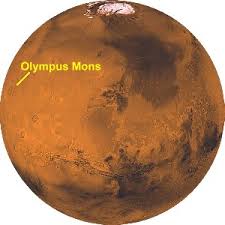 Location of Mt. Olympus on Mars 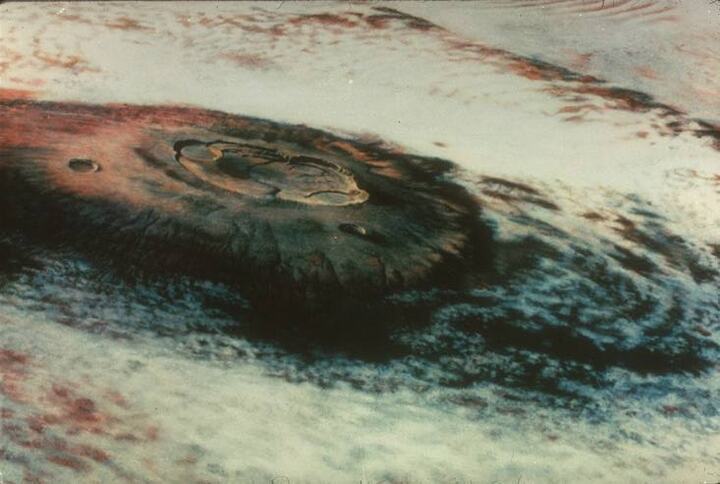 First photo of Mt. Olympus by the Mariner 9 spacecraft in 1971 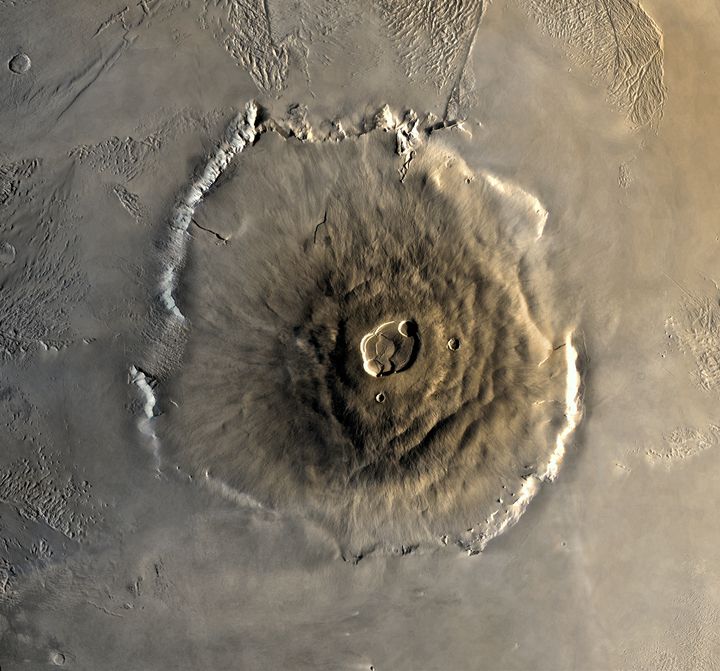 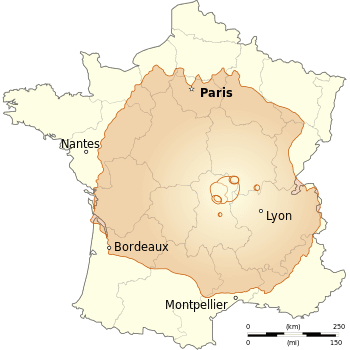 Comparison of Mt. Olympus'outline with France
Mount Olympus (or Olympus Mons, the official name in Latin) on planet Mars is the largest known volcano in the Solar System.
This giant shield volcano is almost entirely constructed of basalt lava flows. It has a height of nearly 25 km (16 mi) above Mars'surface and a diameter of 600 km, making it about as large as Arizona. It would just fit into the boundaries of France. In fact, it is so large that it could be already seen as a distinct feature on telescopes in the 19th century.
But it wasn't until 1971 that NASA's Mariner 9 spacecraft arrived in orbit around Mars that the nature of Mount Olympus not only as an exceptional mountain but also as a volcano was confirmed.
One important question however remained to be answered: Is Mount Olympus still active?

This question proved to be quite difficult to answer. Despite careful observations by earth- and space-based telescopes, no eruptive activity has ever been recorded on Mt Olympus - something that most earth scientists would love to witness and which would easily resolve the question.
However, a number of indirect clues as to whether or not Mt Olympus is active were gathered in recent years. Crater counts from high-resolution images taken by the Mars Express orbiter in 2004 indicated that lava flows on the northwestern flank of Olympus Mons range in age from 115 to only 2 million years or less - very young in geologic terms. This was a first clue that suggested that the volcano could still be active.

The final answer to the question however came from a lucky combination of two independent discoveries - as often is the case with important scientific findings. 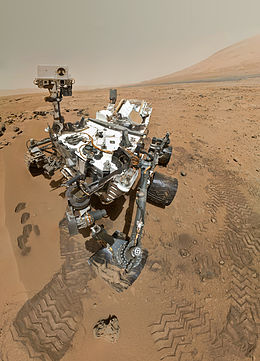 Curiosity rover in Gale Crater, on Mars, collecting a dusty lava bomb sample. Outer slopes of Mt Olympus volcano in background (October 31, 2012, NASA image)
The first clue came from NASA´s recent mission to Mars. NASA launched the car-sized Curiosity rover on November 26, 2011, aboard the MSL spacecraft and landed it on Mars on August 6, 2012. The Mars Exploration Program's main goal was to determine whether Mars could ever have supported life, but also to study its climate and geology.
For the first time, rock samples could be directly analysed ON Mars and their composition was compared to a range of rocks found on earth. This lead to the discovery that the chemical composition of certain meteorites found in Antarctica is nearly identical to Martian rocks - leaving no doubt that some of the meteorites on Earth originate from Mars.
More information on the composition and mineralogy of Martian rocks is published in the latest edition of the international geoscientific journal Elements. 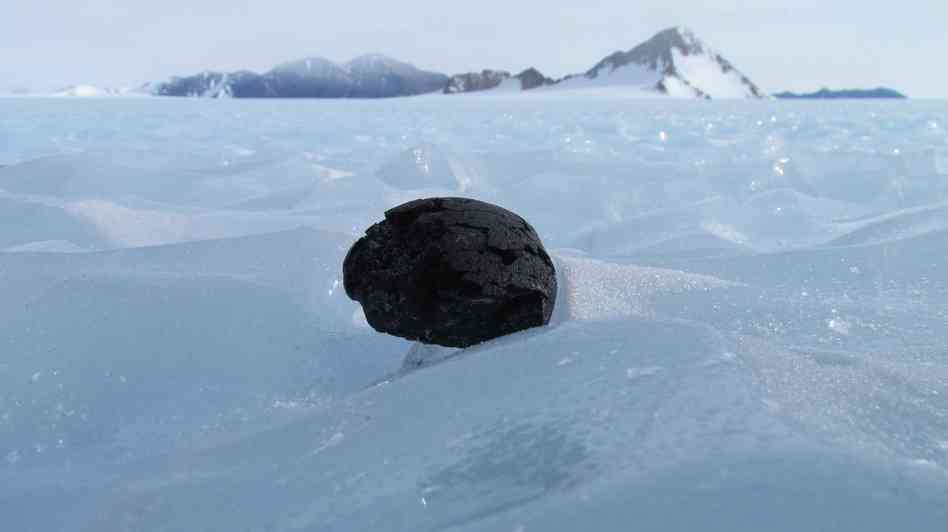 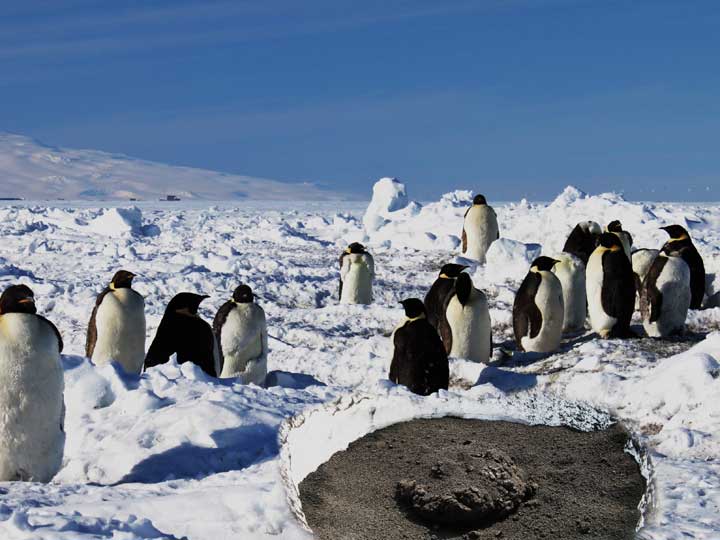 Basalt meteorite (sample nr BET-M7-0104) discovered in a remote part of the East Antarctic Ice Sheet (ANSMET)
The second clue came from an unexpected finding in Antarctica. Every year, scientists participating in the ANSMET (The Antarctic Search for Meteorites) project based in Antarctica's McMurdo station roam around the vast ice fields to collect meteorites.
Thanks to the absence of vegetation and permanently frozen, white icy or snowy surface, the dark meteorites stick out.
The project, a joint effort by NASA, the National Science Foundation (NSF) and the Smithsonian Institution, has so far gathered more than 16,000 meteorites from Antarctica. The recent discovery that many of them are from Mars provides an opportunity to study the volcanic rocks of Mars without having to actually go there.

It was however a group of biologists, tracking down different penguin families, who stumbled across the most spectacular meteorite find of all.
They observed a number of penguins assembled in an unusual location in the middle of an ice field in vast East Antarctica. The birds seemed to have been attracted by a relatively large, seemingly fresh, impact site with intact meteorite. Amongst the ANSMET scientists brought in to study this exceptional meteorite was an Italian geologist who noticed a strong similarity to Etna's frequent volcanic bombs - often rounded pieces of solidified lava ejected during strong eruptions from fire fountains. Chemical analysis of this rock confirmed that it is indeed a basalt bomb, the type of lava commonly erupted by active volcanoes such as Etna, and moreover that it had the same chemistry as the Martian rocks.
Could this really be a lava bomb from Mars?

Messenger from a recent volcanic eruption on Mars 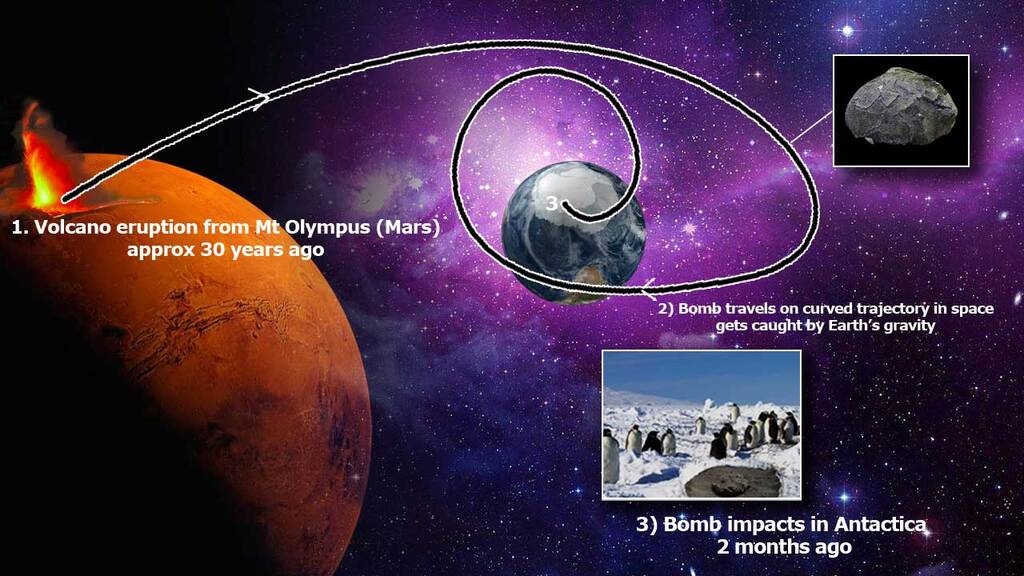 Sketch of the trajectory of a volcanic bomb from Mt Olympus volcano on Mars until impact on Earth as meteorite (image: OPEC / NASA / VolcanoDiscovery)
Where did this lava bomb come from?
Or rather, which volcano did it come from? While Etna's eruptions can be impressively violent and huge, the possibility that this specimen came all the way from Sicily could quickly be ruled out - although volcanic bombs can easily travel many kilometers from their source, earth's dense atmosphere and strong gravitation make sure they fall back near their source.
Even the volcano closest to the site, Mt Erebus, is still located hundreds of kilometers away and can therefore be ruled out. The only possibility left is that the penguins had gathered around a volcanic bomb from outer space. But which volcano?

Evidence of an eruption in space: why size matters
The chemical composition already strongly suggests the Red Planet was the origin. The last piece of solving the puzzle came from numerical modeling of possible trajectories of volcanic bombs during explosive eruptions on outer planets. These take into account the initial ejection speed during an eruption, related to the size of the eruption, the gravity of the planet and the drag induced by its atmosphere.
After running hundreds of numerical simulations for various volcanoes in the Solar System, the supercomputers at NASA's Jet Propulsion Laboratory (JPL) in Pasadena, California, could narrow candidates down to only one suitable candidate: Mt. Olympus volcano.
The key to understanding lies in the volcano's unbelievable size: Being the biggest volcano in the Solar System it also produces the largest eruptions - ones that can eject bombs at greatest speed.
The other key factors are the low gravity of Mars, even a bit lower at the summit of the volcano, and the lack of atmospheric drag that otherwise would slow down the projectiles: at more than 16 km altitude, the Martian atmosphere is so thin that its effect on ejecta is negligible. Bombs ejected under the right angle and at sufficient speed (approx. 2 miles per second) can reach planetary space. Then, it is only a matter of chance and time that some find their way to Earth whose strong gravity finally catches them as meteorites.

When did the eruption occur?
Mars is on average approx. 140 million miles (225 million km) from Earth. At an average speed of 2 miles/s, a volcanic bomb that made its escape would have to travel at least about 800 days, or little more than 2 years. However, this only applies if the bomb travels along a direct trajectory, something very unlikely to occur. Most often, the trajectory before collision with Earth would involve several round-trips on elliptic paths, which would increase the time of travel by a factor of up to 20. In other words, the bomb could have traveled through space for decades after the eruption on Mount Olympus. Although we don't know the precise date, geologists can now be sure that the last eruption of Mt. Olympus occurred at some time in the 20th century, and that the volcano is certainly alive!

Architect's conception of the new MOVO (Mount Olympus Volcano Observatory)
This major scientific discovery led to the proposal to establish a volcano observatory at the crater rim of Mount Olympus, including seismometers, spectrometers, gas sampling devices, webcams and other instruments.
Giving the remoteness of Mars, the volcano's great altitude and potential hazards involved, the idea is that the observatory is unmanned, at least in the beginning. Even so, it is likely to become a very costly mission. NASA has evalutated the funding needed to be around $7.5 billion, including $2.6 billlion for spacecraft development, science investigations and additional amounts for launch and operations.
Since the threat of potential Martian bomb impacts on Earth are not confined to uninhabited areas, UNO has suggested a global crowd-source funding model to collect the necessary money to build the new observatory, which could be finished by 2025, a spokesman said.
Whether this ambitous project remains an engineering dream or not will have to be seen. We will follow progress on this on our MOVO news page.
In any case, geoscience has already profited from the discovery by means of the addition of a new term in the volcanological dictionary: Martian bomb.
Try our free app!

Check if seismic activity worldwide or in a specific area has increased or decreased!
Volcanic Quakes

Earthquakes near Volcanoes
Our world-wide map continuously detects shallow earthquakes near volcanoes. These could be early signs of unrest and often precede eruptions.
Volcano Videos

Watch videos from our volcano trips
Get the ad-free version!
Why is there advertising on this site?
Sources: VolcanoDiscovery / VolcanoAdventures and other sources as noted.
Use of material: Most text and images on our websites are owned by us. Re-use is generally not permitted without authorization. Contact us for licensing rights.
Volcanoes & Earthquakes