Chronicle of the Colima eruption in 2005:

Colima entered a particularly active phase during March 2005, with an increasing tendency to produce more and more powerful explosions. Whether this trend will turn or further escalate is not known at the time of writing (June 10, 2005). A brief summary of major events during that (ongoing) phase is given here.

Chart published by the Colima Volcano Observatory, comparing the magnitude of major explosions during the last months and years in relation to the explosion on 29 July 1999.

Other facts and aspects

Damage:
On several occasions, ash coated cars and streets in nearby villages as well as the the state capital, Colima. Authorities recommended residents wear masks and sunglasses or goggles to avoid respiratory and eye irritations.


Evacuations:
Despite some non-forced evacuation orders by the authorities taken out in a few sourrounding villages, many families have insisted on staying, concerned their few possessions might be stolen or that they might be forbidden to return. About 300,000 people live within 25 miles of the volcano. Authorities have established an off-limits zone 7.5 km around the crater, and an alert zone is in effect for 10.5 km. 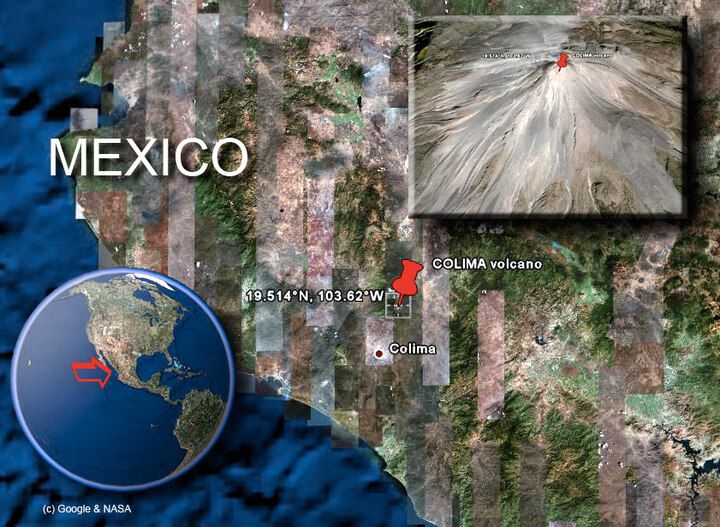 List and map of all volcanoes in Africa. Most volcanoes are located in the Great Rift Valley, but there are more.
Volcano Specials

Volcano Special Tours
We organize tours to particularly active volcanoes and during ongoing eruptions for extended observation time from various viewpoints. These trips, exclusively for very small groups, are often announced only at short notice and require fast travel and flexibility. Each trip is accompanied by a volcanologist from our team. Examples include: Kilauea (Hawai'i), Colima (Mexico), Krakatau and many others.
Bárdarbunga

Etna trekking tour
A tour entirely dedicated to Etna, the most active volcano in Europe. Spend 6 full days on Etna and get good chances to see eruptive activity.
Get the ad-free version!
Why is there advertising on this site?
Support us - Help us upgrade our services!
We truly love working to bring you the latest volcano and earthquake data from around the world. Maintaining our website and our free apps does require, however, considerable time and resources.
We need financing to increase hard- and software capacity as well as support our editor team. We're aiming to achieve uninterrupted service wherever an earthquake or volcano eruption unfolds, and your donations can make it happen! Every donation will be highly appreciated. If you find the information useful and would like to support our team in integrating further features, write great content, and in upgrading our soft- and hardware, please make a donation (PayPal or Online credit card payment).