Nevado del Ruiz volcano in central Colombia, 130 km WNW of Bogota, is a broad, glacier covered volcano. A relatively small eruption in 1985 caused a devastating mud flow that killed almost 25,000 people in the town of Armero, marking one of the worst volcanic disasters in history. Sadly, this tragedy could have been easily avoided if clear warnings by volcanologists had been taken seriously.

Nevado del Ruiz covers more 200 sq km and it is composed by 3 major andesitic and dacitic edificed of lavas and tuffs. The present-day cone is composed by lava domes built within the summit caldera of the older Ruiz volcano. Its summit contains the 1-km-wide and 240-m-deep Arenas crater.
The prominent La Olleta flank cone on the SW flank was probably built in historic time. Nevado del Ruiz has repeatedly produced large mud flows (lahars), triggered by melting of the summit glacier during eruptions. Deposits of these mud flows are found on its broad flanks and these events have been known since the 16th century.

1985 Armero mud flow disaster
Nevado del Ruiz erupted on 13 November 1985. Although the eruption was small, it caused a large mud flow which swept through the town of Armero almost 40 km away from the summit where more than 23,000 people were killed.
The event caused a heated debate because government officials chose to ignore volcanologists'warnings of the imminent danger of the advancing lahar. The eruption itself had been preceded by increased fumarolic, phreatic and seismic activity for a year.
The tragedy was South America's worst and globally the 4th worst volcanic known disaster.
The event was even more tragic, because it the same events had already occurred at least 2 times during earlier eruptions. ...more
Latest satellite images 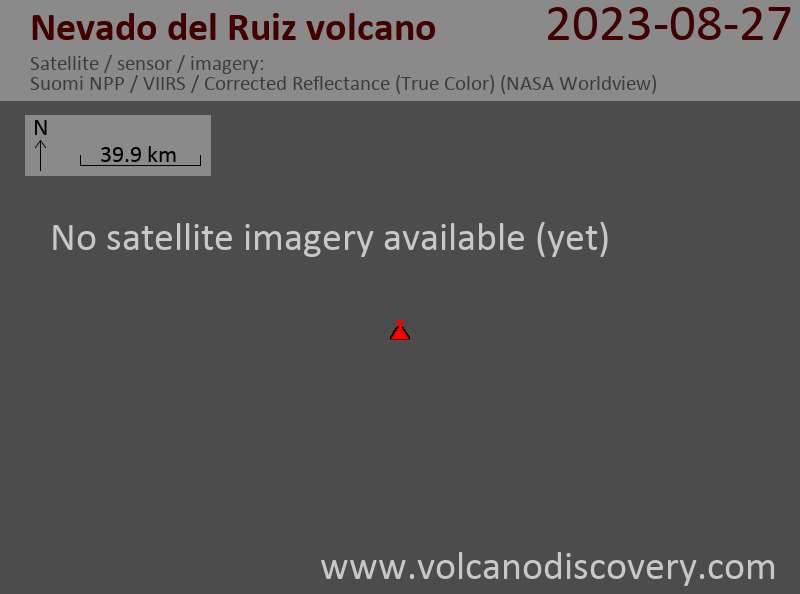 See also: Sentinel hub | Landsat 8 | NASA FIRMS
First visit to our site? If you havn't done it yet, download the Volcanoes & Earthquakes app to get one of the fastest volcano news online:
Android | IOS
Latest news
Mon, 5 Dec 2022, 20:15

Volcanoes & Spices
This 17-days adventurous expedition is one of our most exciting volcano tours! Visit Halmahera, North Sulawesi and the Sangihe Islands with some of Indonesia's most active volcanoes, including Dukono, Ibu, Lokon, Soputan and Karangetang.
Volcanic features

Seismic crisis in SW Iceland
In mid Feb 2021, a strong seismic crisis started on the Reykjanes peninsula, caused by a magmatic intrusion that could lead up to a new volcanic eruption. Follow the latest developments!
Get the ad-free version!
Why is there advertising on this site?