What caused the end of the dinosaur era?

There are several theories regarding the mass extinction at the end of the Cretaceous that ended the era of dinosaurs. Most accepted is the idea that the large meteorite impact which occurred around the same time was a key trigger for the mass extinction.
Shortly before this impact, however, our planet also underwent a phase of unusually large volcanic eruptions. These are believed to have released huge amounts of volcanic gases and ash into the air,- something which is very likely to have had a severe negative effect on the dinosaurs'health.

During routine fieldwork on a remote island volcano back in January 2013, volcanologist Ingrid Smet (Ghent University, Belgium) and Dr. Tom Pfeiffer (VolcanoDiscovery, www) came across a rare discovery: fossil dinosaur footprints in recently exposed volcanic ash layers.
Stromboli volcano had a peak of activity during early January and suffered a major landslide on 12 January. The slide had carved into older layers on the steep slope of the volcano, exposing much older volcanic layers.
In order to investigate the new crater configuration, Smet and Pfeiffer hiked up the volcano and found the dinosaur footprints by coincidence in a fresh outcrop near their route uphill, at approx. 600 m elevation, just above the upper level of vegetation which until then had conserved the footprints.

Did some dinosaurs survive the global catastrophy?

The problem that immediately arose was: These ash layers from Stromboli volcano are believed to be significantly younger than 65 million years. In other words, at least some species of dinosaurs might have survived well beyond the currently believed date of their extinction.

How did these dinosaurs survive so long?

Scientists now speculate that a small dinosaur population got isolated on this volcanic island long before the mass extinction event. Similar to the Galapagos finches on which Darwin based his famous evolution theory, the subsequent generations of 'volcano dinos'increasingly adapted to the challenging volcanic environment of their habitat.
So when catastrophic and worldwide volcanic eruptions wiped out most dinosaurs and other large animals on the main continental land masses, the 'volcano genes'of dinosaurs which lived for many generations on Stromboli made them immune to the poisonous volcanic gasses and ash.
It is however unclear how much longer this small and isolated dinosaur population inhabited the island, as dating of the two fossil footprints has so far been impossible.


Which type of dinosaur?

Under the harsh conditions present on any volcano in eruption, work at the site was difficult and dangerous for the scientists. During several weeks of intense work, Smet and Pfeiffer looked for more, but were unable to find any other traces (bones, more prints and so on) than the original two footprints. However, preliminary palaeontological analysis indicate that the individual that had left its (perhaps last) prints was different from and larger than any of the currently known types of dinos, but likely related to a subspecies of Diplodocus hallorum, a giant plant-eater with exceptionally strong built skeleton (perhaps able to withstand even moderately large volcanic bomb impacts).

Renowned palaeontologists from the Universities of Rome and Catania, as well as OPEC were immediately informed about this unexpected and unique discovery, but it was only after 14 months of thorough research to establish the authenticity of the footprints that this discovery was made public.
The upcoming current cover issue of the internationally high-standing scientific journal 'Natures'(Nappi, S.C.H., et al., 2014, "Volcano dinos survive mass extinction for millions of years". Natures Special Issue, Vol.4711, pp. 1-205) reveals all details of this discovery and discusses the possibility that similar fossils could be present on other remote volcanic islands. 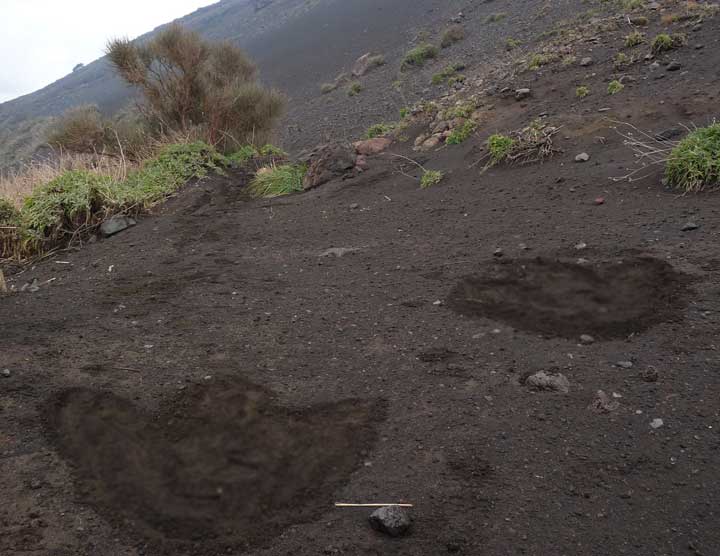 One of the first pictures of the two fossil dinosaur footprints (photo protected by copyright). 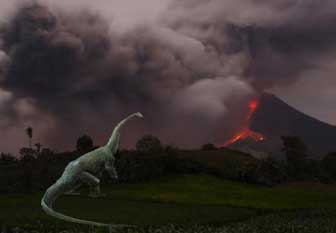 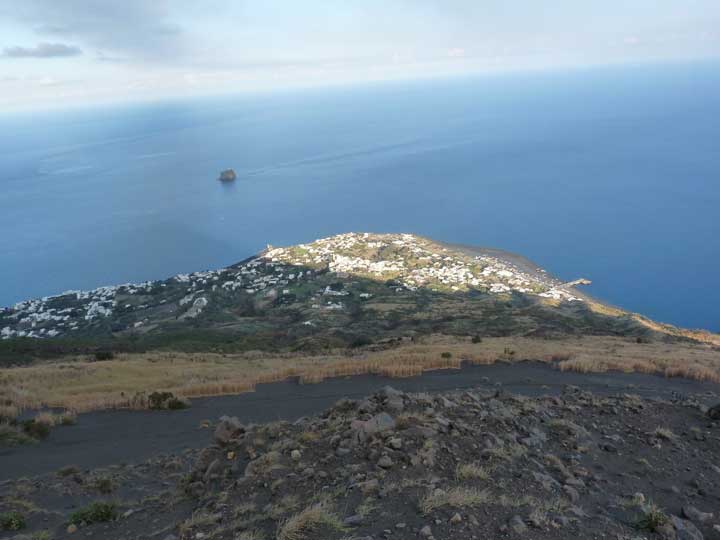 View from the fossil dinosaur footprint location downwards the volcano towards the main village of Stromboli. The presence of the fossil footprints confirms that Stromboli was already a 600m tall volcanic island millions of years ago. 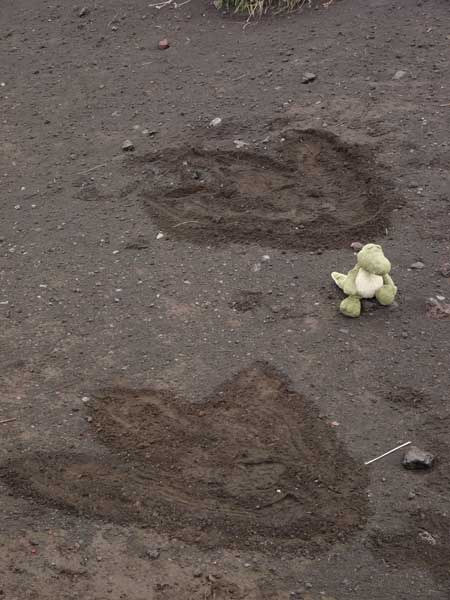 Close-up of the fossil footprints with crocodile Dr. rer. nat. S.C.H. Nappi for scale, after careful cleaning out and further revealing of the two unique fossil imprints.
Try our free app!

Nyiragongo volcano photos
Nyiragongo (DR Congo) has the world's largest and most active lava lake. Enjoy our pictures taken during several expeditions over the past years.
Volcano Map

Map of currently active volcanoes
See which volcanoes are erupting at the moment! Probably more than you think...
Volcano Calendar 2016