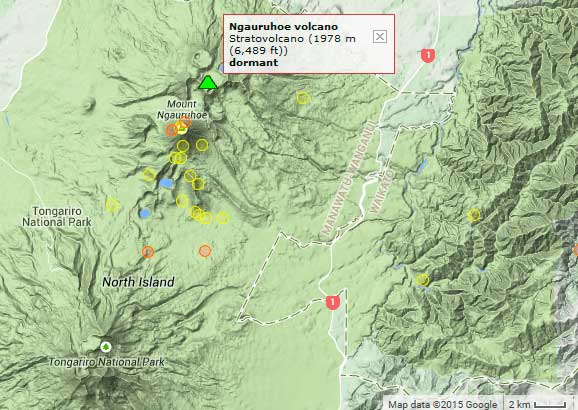 Earthquakes (yellow and red circles) near Ngauruhoe during the past 14 days
New Zealand's GNS Science reports an increase in earthquakes under the volcano, interpreted as weak signs of volcanic unrest. The Volcanic Alert Level was raised to level 1 (minor volcanic unrest), but no eruption is expected in the near future.
from the original report:
"During the last two to three weeks there has been an increase in the number and magnitude of earthquakes being recorded by the GeoNet seismographs around Mount Ngauruhoe. Initial analysis indicates these earthquakes are shallow, occurring at depths of less than about 5 km.

The last significant eruption at Ngauruhoe was in 1975. Earthquakes are not unusual near Ngauruhoe, but it is some time since we last recorded significant numbers or events above magnitude 1. Similar numbers, but smaller events occurred in December 2014. Other swarms of earthquakes near Ngauruhoe occurred in 1983, 1991, 1994, 1995 and again between 2006 and 2010, but otherwise Ngauruhoe usually has little earthquake activity.

The Volcanic Alert Level was raised to Level 1 in June 2006 and then lowered to Level 0 in December 2008 in response to the earthquake activity at that time. No other parameters we measure at Ngauruhoe (gas, temperature) changed during these times.

VolcanoDiscovery tours
A selection of our most popular trips, which we have been offering and improving over many years now: Stromboli & Etna, Santorini, Java, Ethiopia, Nyiragongo and more. Have a look!
Ibu

Ibu volcano photos
Ibu in Halmahera is one of the most active, but rarely visited volcanoes in Indonesia. A spectacular lava dome is growing inside the volcano's breached crater, with frequent explosions.
Colima

Colima volcano photos
This beautiful stratovolcano in western Mexico is one of the most active volcanoes on the American continents. It is known for its often spectacular explosions and sometimes glowing avalanches.
Geology dictionary

Glossary of geologic terms
A growing list of often illustrated explanations and definitions of geological terms and keywords, with focus on volcanology and seismology.
Kelut eruption 13 Feb 14