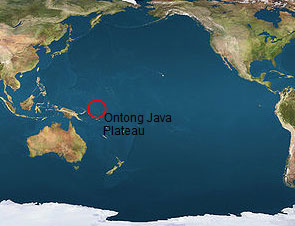 Location of the Ontong Java Plateau 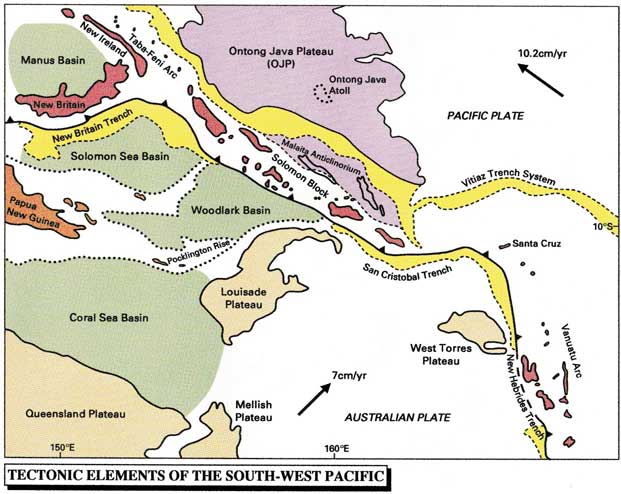 Tectonic setting of the Ontong Java Plateau (from Pettersen et al, 1999)
The Ontong Java Plateau is a huge oceanic lava plateau in the Pacific Ocean north of the Solomon Islands. It covers approx. 2 million, about the same area as Alaska, and consists of up to 30 km layers of basalt lava.
The plateau was produced 125–120 million years ago by a flood-basalt eruption of a large mantle plume. It represents one of the largest lava eruptions on earth during the past 300 million years.
The eruption produced about 100 million cubic kilometers of basalt (i.e. 100 MILLION times more magma than Mt St. Helens in 1980) and covered about 1% of the earth's surface, creating the largest oceanic plateau. Tectonic movements split the original plateau into present-day's Onto Java Plateau, the Manihiki Plateau east of Samoa and the Hikurangi Plateau east of New Zealand's North Island.
The mantle plume that produced the Ontong Java Plateau is called the Louisville hotspot. A secondary phase of lava eruptions occurred 20-40 million years later (100-80 million years ago).
Most of the plateau was formed under water and is submerged, but tectonic collision with the Solomon Island Block has caused parts of the Ontong Java Plateau to be uplifted above sea level. This includes the islands of Makira, Malaita and the northern half of Santa Isabel, as well as the smaller islands of Ramos and Ulawa. Several large volcanic seamounts arise from the plateau, including the one capped by Ontong Java Atoll (which gave the name to the lava plateau).

Kuril Islands expedition
The Kuril islands form one of the most active volcanic chains in the world, but are very difficult to access. From time to time, we organize expeditions to some of these remote and still unspoiled islands. Adventure guaranteed!
Fumaroles

Krakatau volcano photos
Hundreds of photos from active Krakatau volcano in the Sunda Strait, Indonesia. Most of them taken during our various expeditions to this fascinating volcano.
Short tours

1-3 day excursions
If you're interested in volcanoes, there are a number of excursions you should not miss if you're in the area: hike to the craters of Stromboli volcano, climb Etna volcano, get to know the unique volcanic history of Santorini - some examples of shorter (1-3 days) tours and excursions we offer.
Bárdarbunga

Bárdarbunga eruption 2014
Photos from the Holuhraun fissure eruption: large lava fountains and lava flows from close!
Get the ad-free version!
Why is there advertising on this site?
Support us - Help us upgrade our services!
We truly love working to bring you the latest volcano and earthquake data from around the world. Maintaining our website and our free apps does require, however, considerable time and resources.
We need financing to increase hard- and software capacity as well as support our editor team. We're aiming to achieve uninterrupted service wherever an earthquake or volcano eruption unfolds, and your donations can make it happen! Every donation will be highly appreciated. If you find the information useful and would like to support our team in integrating further features, write great content, and in upgrading our soft- and hardware, please make a donation (PayPal or Online credit card payment).