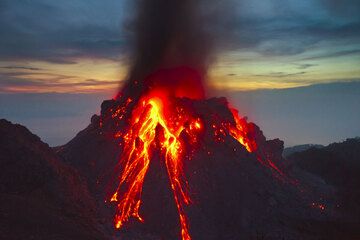 Glowing avalanches and ash venting at dusk of 1 Dec. Part of the older 1982 Rokatenda lava dome to the left in the image (Photo: Tom Pfeiffer) 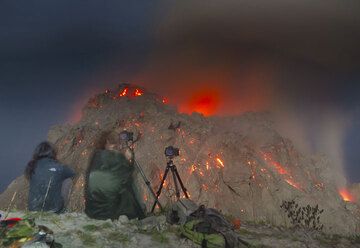 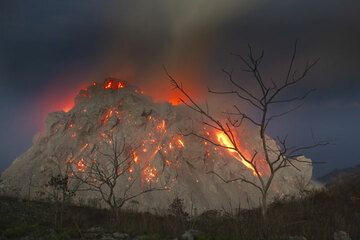 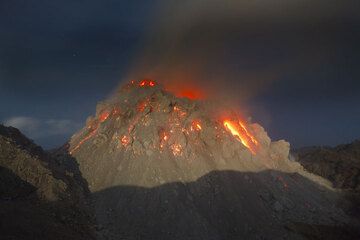 Volcano Trekking
A physically active tour to visit and climb some of Indonesia's most active and famous volcanoes: Papandayan and Galunggung in West Java, Merapi in Central Java, Kelud, Semeru, Bromo, the Tengger caldera, and Ijen in East Java.
Volcano Stats

Statistics on active volcanoes
Find out which volcanoes erupted in a given year or month!
Santorini
17-24 Sep 2022

Pearl of the Aegean
Santorini is one of the most beautiful islands in the world, famous for its breathtaking sea-filled caldera and picturesque villages. Discover its fascinating natural and cultural history on a relaxed walking study tour with us.
Molucca
3-19 May 2020

Volcanoes & Spices
This 17-days adventurous expedition is one of our most exciting volcano tours! Visit Halmahera, North Sulawesi and the Sangihe Islands with some of Indonesia's most active volcanoes, including Dukono, Ibu, Lokon, Soputan and Karangetang.
Get the ad-free version!
Why is there advertising on this site?
Support us - Help us upgrade our services!
We truly love working to bring you the latest volcano and earthquake data from around the world. Maintaining our website and our free apps does require, however, considerable time and resources.
We need financing to increase hard- and software capacity as well as support our editor team. We're aiming to achieve uninterrupted service wherever an earthquake or volcano eruption unfolds, and your donations can make it happen! Every donation will be highly appreciated. If you find the information useful and would like to support our team in integrating further features, write great content, and in upgrading our soft- and hardware, please make a donation (PayPal or Online credit card payment).