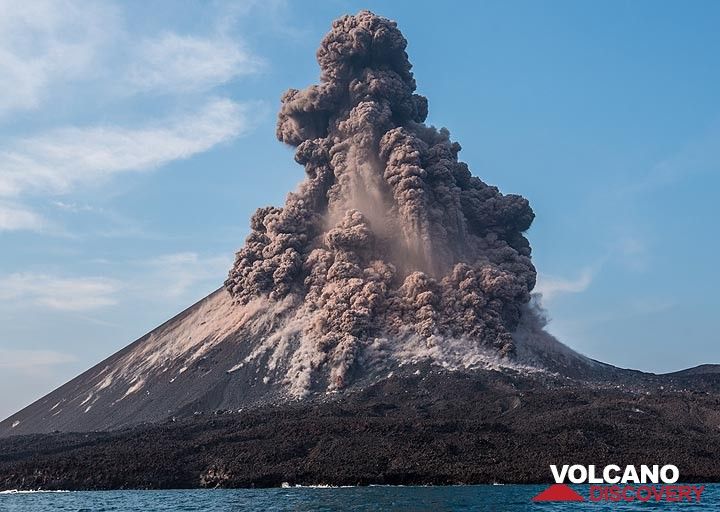 Volcanoes of Italy - the Grand Tour
A luxury tour in Italy with a volcanologist to discover the famous volcanoes of Italy: Mt Vesuvius that destoyed the Roman towns of Pompeii and Herculaneum, smoking Vulcano and Lipari, famous for its obsidian and pumice deposits, erupting Etna and Stromboli... Last but not least, very nice accommodation and delicious food wait for you!
Volcanoes in Africa

List and map of all volcanoes in Africa. Most volcanoes are located in the Great Rift Valley, but there are more.
Santorini 1600 BC

Photos from Kilauea volcano: lava flowing into the sea
Vanuatu

Vanuatu Volcano Tours
One of the most exciting volcano travel destinations in the world! On our adventurous expeditions, you will get close to active lava lakes on Ambrym Island and the spectacular fireworks of Yasur volcano on Tanna Island.
Get the ad-free version!
Why is there advertising on this site?
Copyrights: VolcanoDiscovery and other sources as noted.
Use of material: Most texts and images, in particular photographs, on this website are protected by copyright. Further reproduction and use of without authorization is usually not consented. If you are not sure or need licensing rights for photographs, for example for publications and commercial use, please contact us.
Home | Travel | Destinations | Volcanoes | Photos | Earthquakes | About | Glossary | News | Contact | Privacy - change consent | Imprint | EN | DE | EL | ES | FR | IT | RU
Follow us: