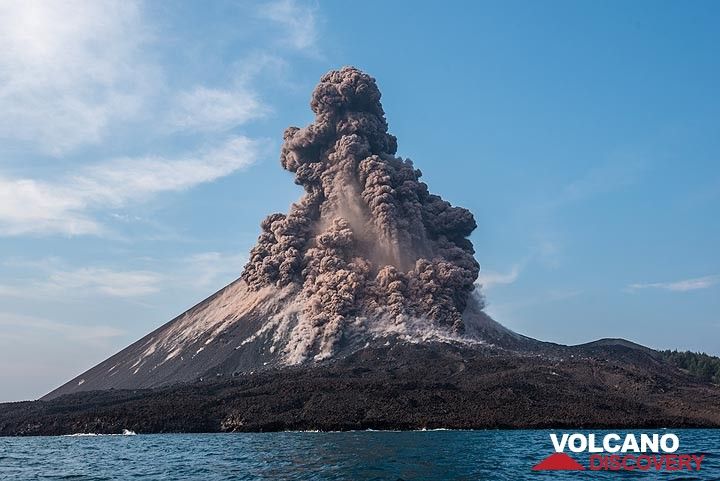 « Previous · Next »
On 17 Oct, explosions were particularly violent at Anak Krakatau. We show a series of images of a spectacular explosion captured from close range by boat. 2 months later, the cone of Anak Krakatau collapsed into the sea on the evening of 22 Dec 2018, triggering a catastrophic tsunami. The following sequence of pictures was taken within few seconds from each other each. (Photo: Tom Pfeiffer)
Thumbnails↑ · ↑↑Gallery Index
Copyright: Tom Pfeiffer / www.volcano-photo.com
Contact: Email
File: krakatau_k18620.jpg | Hits | + 42 similar images

Infos + news about volcanic activity in Iceland
Hekla, Katla, Krafla, Askja, Eyafjallajökull, Heimaey, Surtsey are famous names of active volcanoes, but there are many more in Iceland.
Lava flows

Ebeko volcano photos
Ebeko on Paramushir Island in the northern Kuriles, Russia, is one of the most active volcanoes in the world. It has been in near-constant eruption for years.
Get the ad-free version!
Why is there advertising on this site?
Copyrights: VolcanoDiscovery and other sources as noted.
Use of material: Most texts and images, in particular photographs, on this website are protected by copyright. Further reproduction and use of without authorization is usually not consented. If you are not sure or need licensing rights for photographs, for example for publications and commercial use, please contact us.
Home | Travel | Destinations | Volcanoes | Photos | Earthquakes | About | Glossary | News | Contact | Privacy - change consent | Imprint | EN | DE | EL | ES | FR | IT | RU
Follow us: