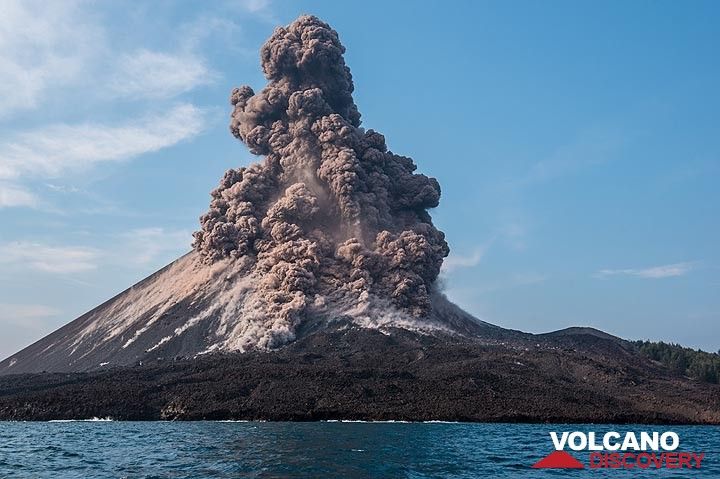 « Previous · Next »
At this point, we start to realize that our position is not safe at all... (Photo: Tom Pfeiffer)
Thumbnails↑ · ↑↑Gallery Index
Copyright: Tom Pfeiffer / www.volcano-photo.com
Contact: Email
File: krakatau_k18621.jpg | Hits | + 42 similar images

How to watch volcanoes? Which volcano to choose? Some guidelines.
Guatemala

Fuego volcano photos
One of Central America's most active volcanoes, Fuego in Guatemala is in near-permanent explosive eruption with intermittent phases of increasing activity that generate lava fountains, lava flows and pyroclastic flows.
Get the ad-free version!
Why is there advertising on this site?
Copyrights: VolcanoDiscovery and other sources as noted.
Use of material: Most texts and images, in particular photographs, on this website are protected by copyright. Further reproduction and use of without authorization is usually not consented. If you are not sure or need licensing rights for photographs, for example for publications and commercial use, please contact us.
Home | Travel | Destinations | Volcanoes | Photos | Earthquakes | About | Glossary | News | Contact | Privacy - change consent | Imprint | EN | DE | EL | ES | FR | IT | RU
Follow us: