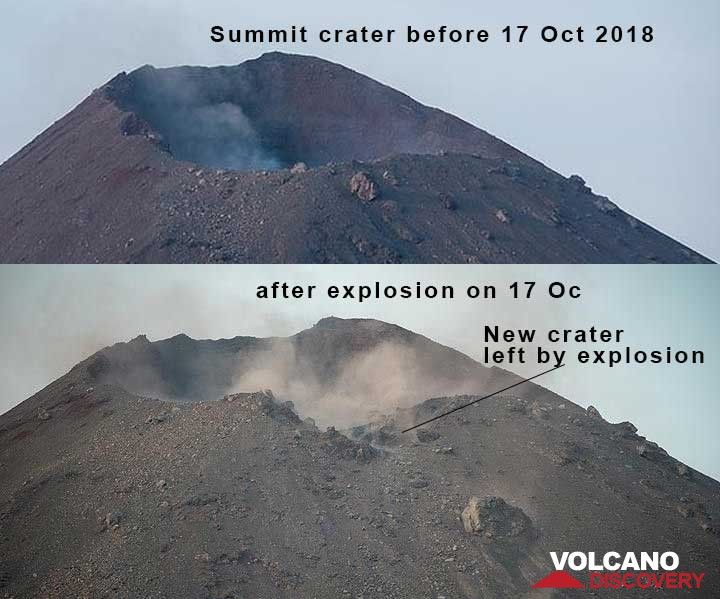 « Previous ·
Comparison of the summit crater before the explosion and after - it has occurred from a point high on the upper flank, where the Sep lava flow had been active, and excavated a new pit there. (c)
Thumbnails↑ · ↑↑Gallery Index
Email File: krakatau_k18486-comparison.jpg | Hits

Krakatoa explodes
In the afternoon of 17 Oct, a particularly violent explosion occurred at Anak Krakatau, blasting away a portion of the southern crater rim. A similar event might have been the final trigger for the catastrophic landslide that let the cone collapse and cause a devastating tsunami on 22 Dec 2018.
Vote for pictures

Image pool
View user-submitted images and vote for the Photo of the Month!
Kamchatka volcanoes

Kamchatka volcano tour Sep 2017 - tour diary
Impressions from our tour to Kamchatka's volcanoes: remote Karymsky, Gorely, Mutnovsky, Uzon and Valley of Geysers, Klyuchevskoy volcano and more.
Support us
If you find the website useful and would like to support us and help keep it alive and improve it, please consider making a small donation. Thank you!
Vanuatu 20 Sep - 5 Oct 2020

Volcanoes & Cultures
The contrast between unspoiled rain-forest, coconut palm beaches, primitive culture and moon-like landscapes surrounding lava-spitting volcanoes could not be bigger: join us on an expedition to the two most active volcanoes of Vanuatu: Ambrym and Yasur.
Get the ad-free version!
Why is there advertising on this site?
Copyrights: VolcanoDiscovery and other sources as noted.
Use of material: Most texts and images, in particular photographs, on this website are protected by copyright. Further reproduction and use of without authorization is usually not consented. If you are not sure or need licensing rights for photographs, for example for publications and commercial use, please contact us.
Home | Travel | Destinations | Volcanoes | Photos | Earthquakes | About | Glossary | News | Contact | Privacy - change consent | Imprint | EN | DE | EL | ES | FR | IT | RU
Follow us: