Chronology of the 1991 eruption of Pinatubo volcano, Philippines

16 July 1990
A magnitude 7.8 earthquake hits 100 km northeast of Mt Pinatubo.
3 August 1990: Pinatubo awakes after >400 years
Loud rumbling noises are heard around Pinatubo. A landslide occurs near the summit and steam vents appear on the ground.
August 1990
5 earthquakes occur near Pinatubo.
15 March 1991
More rumbling noises and earth tremors are felt.
2 April 1991
(Phreatic) Steam and ash explosions occur exploded from a 1.5 km long fissure high on the northern slope of Pinatubo. Sulphur smell is detected and ash fall occurs 10 km away.
3 April 1991: seismic swarm
A swarm of 200 small earthquakes are measured under the volcano.
23 April 1991
USGS scientists arrive with modern monitoring equipment.
26th April 1991
Monitoring station set up at Clark Air Base 25 km to the east of the volcano.
13 May 1991
An earthquake swarm with 30-180 earthquakes per day occurs. Measured sulphur dioxide levels rise, indicating fresh magma rising under the surface. The Alert level 2 is issued.
23 May 1991
USGS publishes the first hazard map, indicating the areas most likely to be affected by pyroclastic flows and heavy ash fall.
28 May 1991
Sulphur dioxide emissing increase drastically by a factor of 10 compareas to 2 weeks earlier.
1 June 1991
More shallow earthquakes are registered only 5 km below the summit of Pinatubo.
5 June 1991
SO2 emissions drop sharply, probably because as the vents became temporarily blocked. Seismic activity remains high. A bulge of the volcano is detected by the recently installed deformation monitoring network. The inflation of the volcano suggests magma continues to rise.
7 June 1991
Seismic activity rises dramatically. 1500 earthquakes are measured a day under the volcano, and a (probably phreataic) ash eruption sends a plume to 8 km altitude, suggesting magma is very close to the surface now.
The highest alert level 4 is issued, meaning that a significant eruption might happen any time now. A zone of 20 km radios is declared danger zone.
Shortly after the explosion, a new lava dome is observed 1 km NW of the main crater: new lava is now at the surface, but the viscous lava effectively blocks the gas-rich magma beneath it.
9 June 1991
Sulphur dioxide starts to escape again. The dome becomes unstable and creates the first hot pyroclastic flows, accompanied by larger ash eruptions.
Evacuations are in full swing to move people out of the 20 km danger zone.
10 June 1991
Evacuations of the 14,400 people at the US Clark Air Base start.
12 June 1991
Ash eruptions reach 20 km above the volcano (this day is Philippine Independence Day).
13 June 1991
Ash eruptions increase even more, creating a plume reaching 25 km elevation after a short pause of 28 hours with no explosions. Seismicity remains extremely high.
14 June 1991
A violent explosion occurs at 1:09 pm. The eruption column rises to 21 km in 15 minutes. Hot pyroclastic flows sweet through the valleys around Pinatubo.
15 June 1991, 3:39-10h34pm: the paroxysmal eruption
While typhoon Yunya passes 100 km NE of Pinatubo, causing heavy rainfall and lahars racing down valley of the volcano at 30 km/h, the largest explosion starts in the early afternoon at 3:39 pm. It lasts 9 hrs, and erupts about 5 cubic km of magma (corresponding to 90% of the total erupted during the whole 1991 eruption). The plinian eruption column reaches an incredible 35 km height, and spreads out in the stratosphere.
Evacuations continue to move out people from a 40 km radius.
At 4:30 pm the collapse of the mountain starts, and the summit of Pinatubo begins to sink. The eruption lasts 9 hrs and ends around 10h34 pm.

Despite its enormous size and the population density around the volcano, the probably biggest volcanic disaster in history was avoided thanks to volcano monitoring and sensible reaction of the authorities.

Effects of the eruption :
- 740 fatalities and an estimated 450 million USD in damage to property, 8,000 houses destroyed and 75,000 damaged.
- 2 million people were directly affected, mostly by widespread ashfall and damaged crops
- A 2.5 km wide caldera was formed at the site of the former summit.
The mountain decreased 260 m in height.
- Ash and SO2 aerosols (forming H2SO4 droplets) from the plinian eruption plume are ejected into the stratosphere where it circled and spread around the globe for 12 months.
- As a result, global temperatures sank by 0.5 degree C in 1992 because of the sunlight absorbing effect of the aerosols in the stratosphere.
- The area around Pinatubo was completely reshaped. Surrounding land and valley including whole forests were buried under a 50-200 m deep layer of  ash and pumice.
- In June-Dec 1991 alone, more than 200 large mudflows remobilized ash and raced down the valleys, causing more damage to houses, farmland, roads and bridges.


First visit to our site? If you havn't done it yet, download the Volcanoes & Earthquakes app to get one of the fastest volcano news online:
Android | IOS 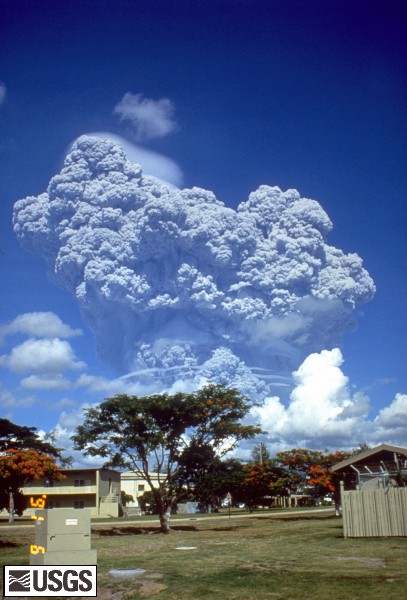 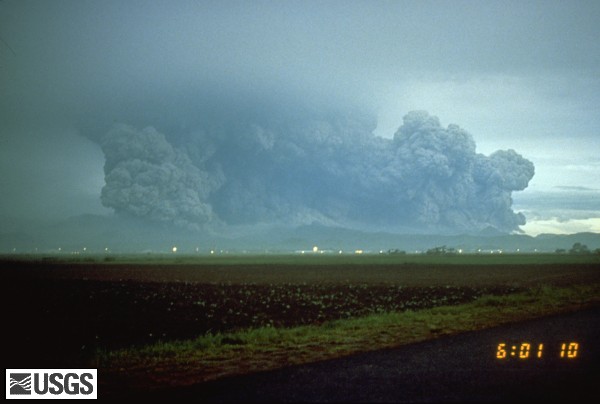 View to west from Clark Air Base of Pinatubo's lateral blast cloud of eruption of 5:55 am. U.S. Geological Survey Photograph taken on June 15, 1991, by Richard P. Hoblitt. 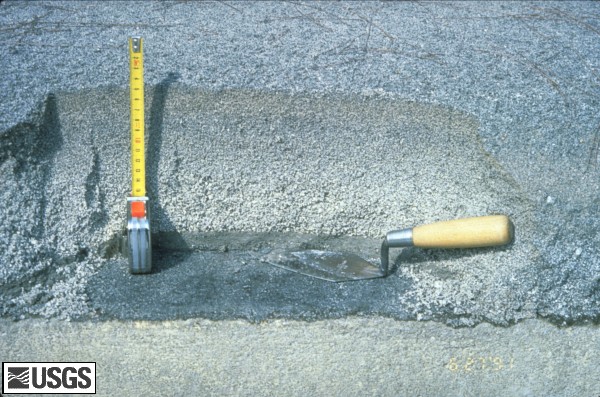 Tephra (ash) fall deposits of mid-June in schoolyard in Linasin (San Marcelino), Zambales, about 30 kilometers southwest of Pinatubo. The base l2 centimeters of brownish-gray ash fell between June 12th and early June 15th, 1991. It is overlain by 14 centimeters of thick pumice-fall deposit on the afternoon of June 15th. Such tephra loads, along with typhoon rain and wind and earthquakes, damaged many structures. U.S. Geological Survey Photograph taken on June 26, 1991, by Willie Scott. 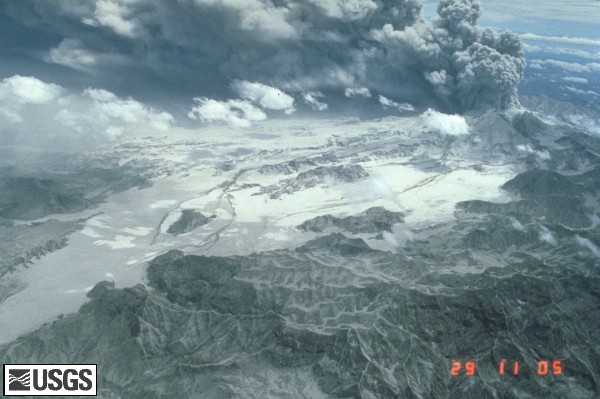 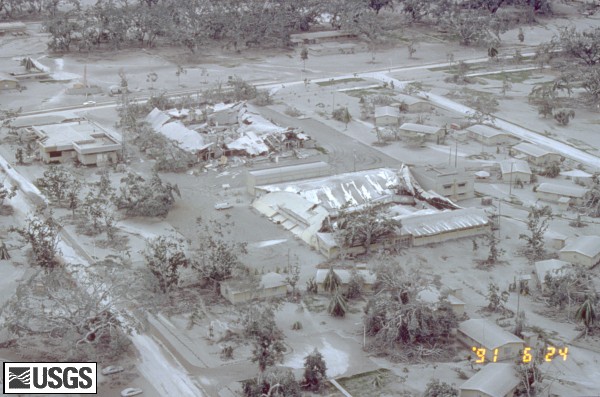 Excellent information for anyone wishing to visit and enjoy active volcanoes safely. Detailed guidelines to 42 different volcanoes around the world.
Accretionary lapilli

Small spherical balls of volcanic ash that form from a wet nucleus falling through a volcanic ash cloud.
Shiveluch 16-24 Mar

Map of currently active volcanoes
See which volcanoes are erupting at the moment! Probably more than you think...
Ebeko

Ebeko volcano photos
Ebeko on Paramushir Island in the northern Kuriles, Russia, is one of the most active volcanoes in the world. It has been in near-constant eruption for years.
Get the ad-free version!
Why is there advertising on this site?
Support us - Help us upgrade our services!
We truly love working to bring you the latest volcano and earthquake data from around the world. Maintaining our website and our free apps does require, however, considerable time and resources.
We need financing to increase hard- and software capacity as well as support our editor team. We're aiming to achieve uninterrupted service wherever an earthquake or volcano eruption unfolds, and your donations can make it happen! Every donation will be highly appreciated. If you find the information useful and would like to support our team in integrating further features, write great content, and in upgrading our soft- and hardware, please make a donation (PayPal or Online credit card payment).