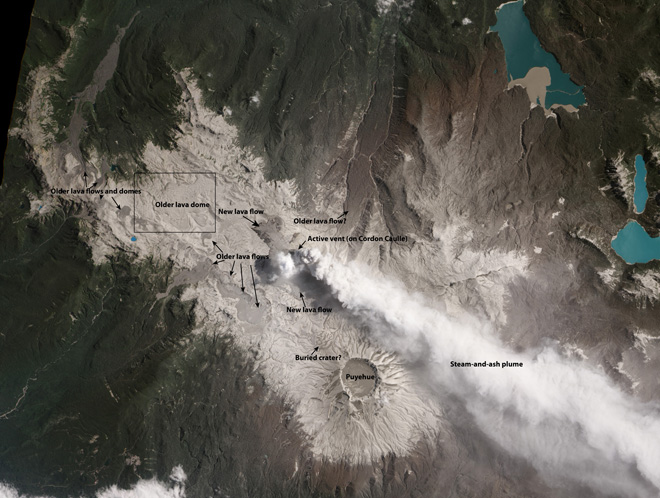 The Puyehue-Cordón Caulle volcanic complex (PCCVC) is a large NW-SE-trending late-Pleistocene to Holocene basaltic-to-rhyolitic transverse volcanic chain SE of Lago Ranco.
The 1799-m-high Pleistocene Cordillera Nevada caldera lies at the NW end, separated from Puyehue stratovolcano at the SE end by the Cordón Caulle fissure complex. The Pleistocene Mencheca volcano with Holocene flank cones lies NE of Puyehue.
The basaltic-to-rhyolitic Puyehue volcano is the most geochemically diverse of the PCCVC. The flat-topped, 2236-m-high Puyehue volcano was constructed above a 5-km-wide caldera and is capped by a 2.4-km-wide summit caldera of Holocene age.
Lava flows and domes of mostly rhyolitic composition are found on the eastern flank of Puyehue. Historical eruptions originally attributed to Puyehue, including major eruptions in 1921-22 and 1960, are now known to be from the Cordón Caulle rift zone.
---
Source: USGS / GVP


1960 eruption following the great Chile earthquake
Puyehue-Cordón Caulle Volcano started erupting on 24 May 1960. It is possible, that the eruption was triggered by the great earthquake in Chile (magnitude 9.5; the largest measured earthquake in history) on 22 May 1960. The eruption started with a powerful explosive (subplinian) phase, which formed an ash column 8 km high.

See also: Sentinel hub | Landsat 8 | NASA FIRMS
First visit to our site? If you havn't done it yet, download the Volcanoes & Earthquakes app to get one of the fastest volcano news online:
Android | IOS
Latest news
Tue, 24 Jan 2023, 05:00

Based on analyses of satellite images, the Buenos Aires VAAC reported that on 24 February a diffuse plume possibly containing ash from the Cordón Caulle rift zone, part of the Puyehue-Cordón Caulle volcanic complex, was lifted from the surface by the wind. ... Read all
Try our free app!

Krakatau volcano photos
Hundreds of photos from active Krakatau volcano in the Sunda Strait, Indonesia. Most of them taken during our various expeditions to this fascinating volcano.
Largest volcano

Pearl of the Aegean
Santorini is one of the most beautiful islands in the world, famous for its breathtaking sea-filled caldera and picturesque villages. Discover its fascinating natural and cultural history on a relaxed walking study tour with us.
YouTube

Volcano Videos on YouTube
Our YouTube channel: volcanic activity world-wide shown through videos taken during our volcano tours and expeditions complimented by some time-lapse videos from webcams.
Greece

Photos from Greece
We have traveled all over Greece, in particular on its active volcanic areas such as Santorini, Nisyros, Milos, Methana.
Get the ad-free version!
Why is there advertising on this site?