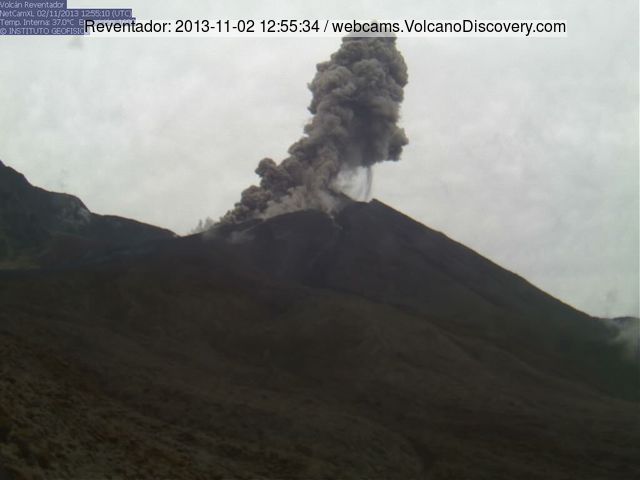 Explosion and small pyroclastic flow from Reventador on 2 Nov 2013
The activity consisting of sporadic small to moderate explosions continues but has decreased after 2 November. On that day, a small pyroclastic flow descended on the west flank of the active cone, reaching a length of 300-400 m. Explosions produced plumes of up to about 2 km height and light ash fall occurred in San Rafael village located 8 km east of the volcano. Read all
Reventador volcano (Ecuador) activity update
Sun, 3 Nov 2013, 10:40 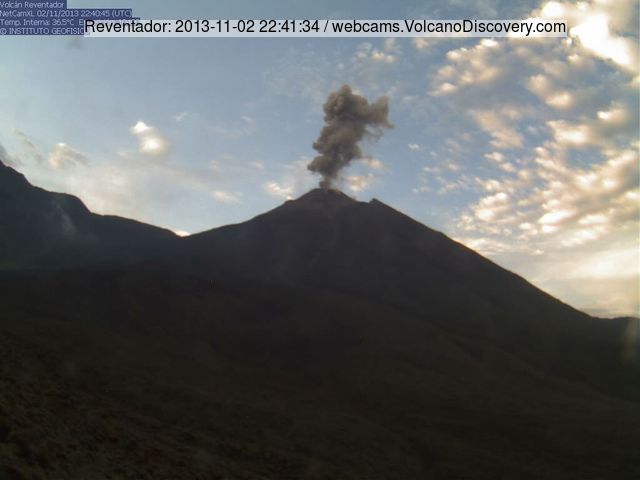 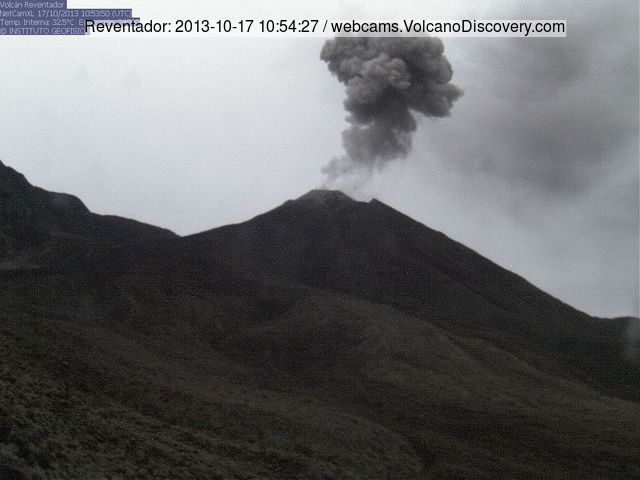 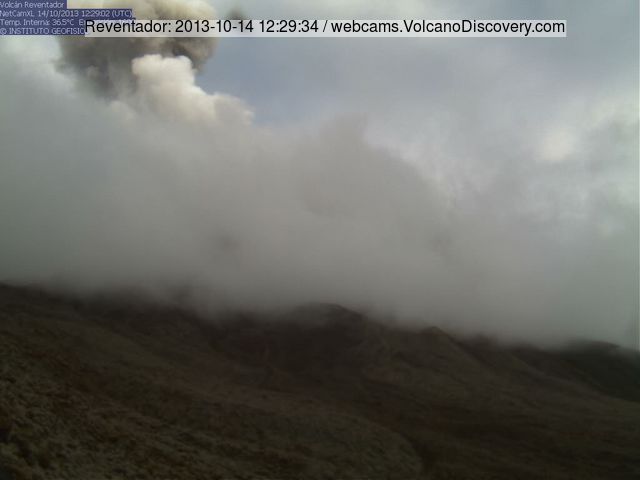 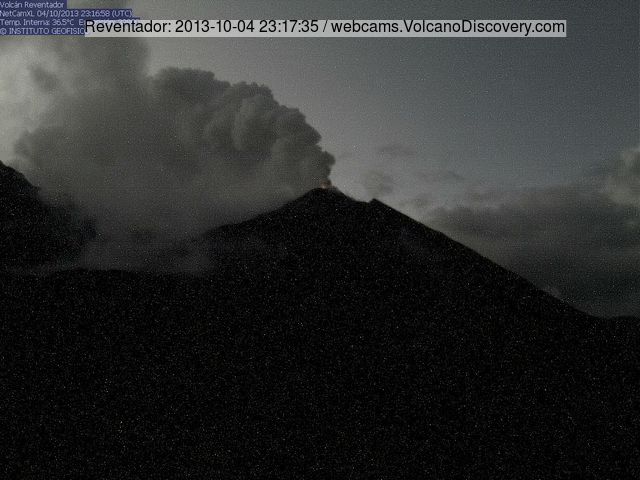 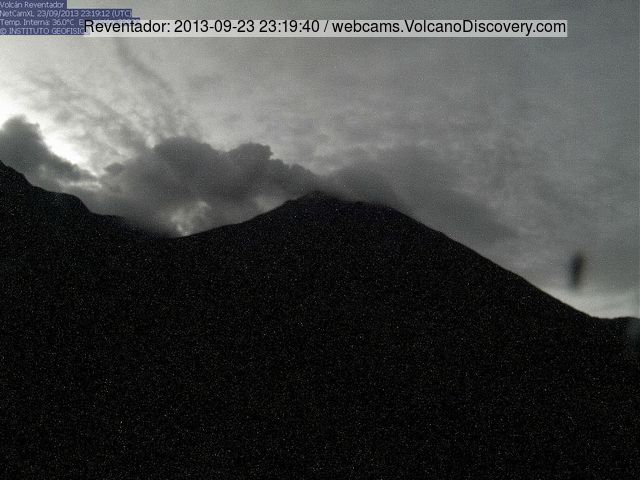 Steam emission (with ash?) from Reventador yesterday
Activity (as far as could be observed) has been a bit calmer with less frequent explosions during the past days, but essentially remains unchanged. Seismic activity is at moderate to high levels and a thermal hot spot is visible at the summit.
to top
Reventador volcano (Ecuador): frequent small explosions
Thu, 19 Sep 2013, 02:52 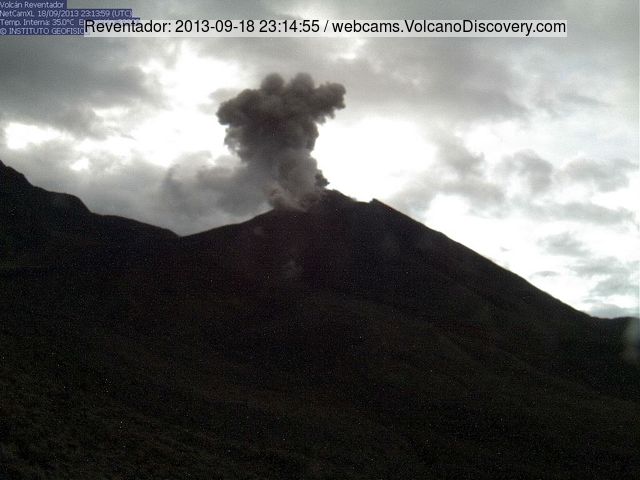 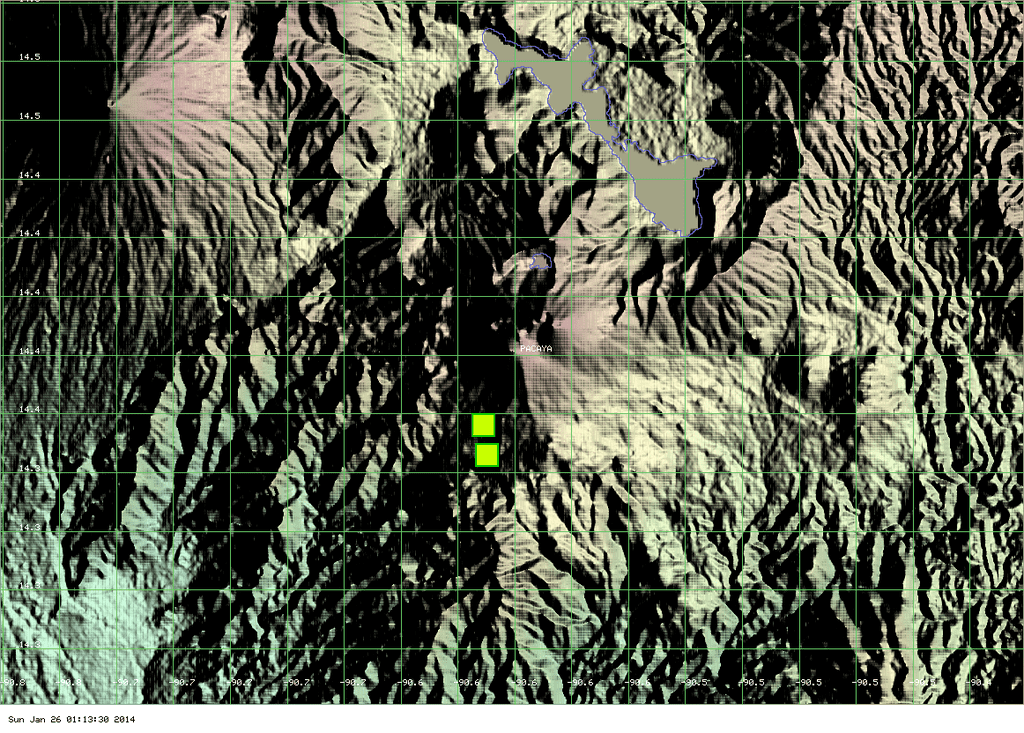 MODIS hot spot data (past 7 days) for Reventador volcano (ModVolc, Univ. Hawaii)
An explosion was heard last evening (but could not be observed due to cloud cover). Activity, both internal (seismic) and external, remain generally at moderate to high levels, but has been lower today. Read all
Show more
Reventador volcano (Ecuador) activity update
Sat, 14 Sep 2013, 09:50 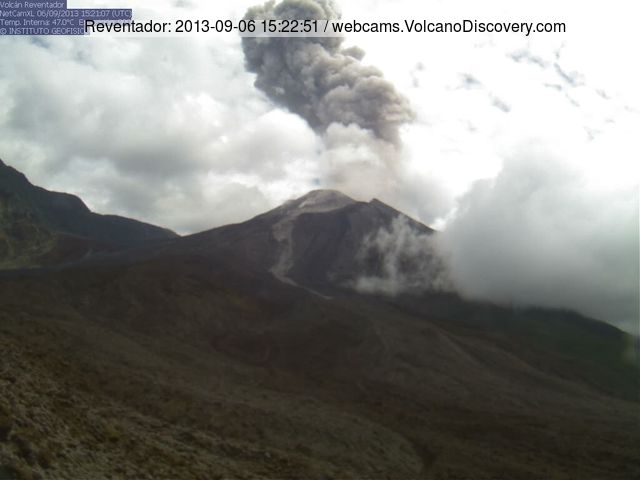 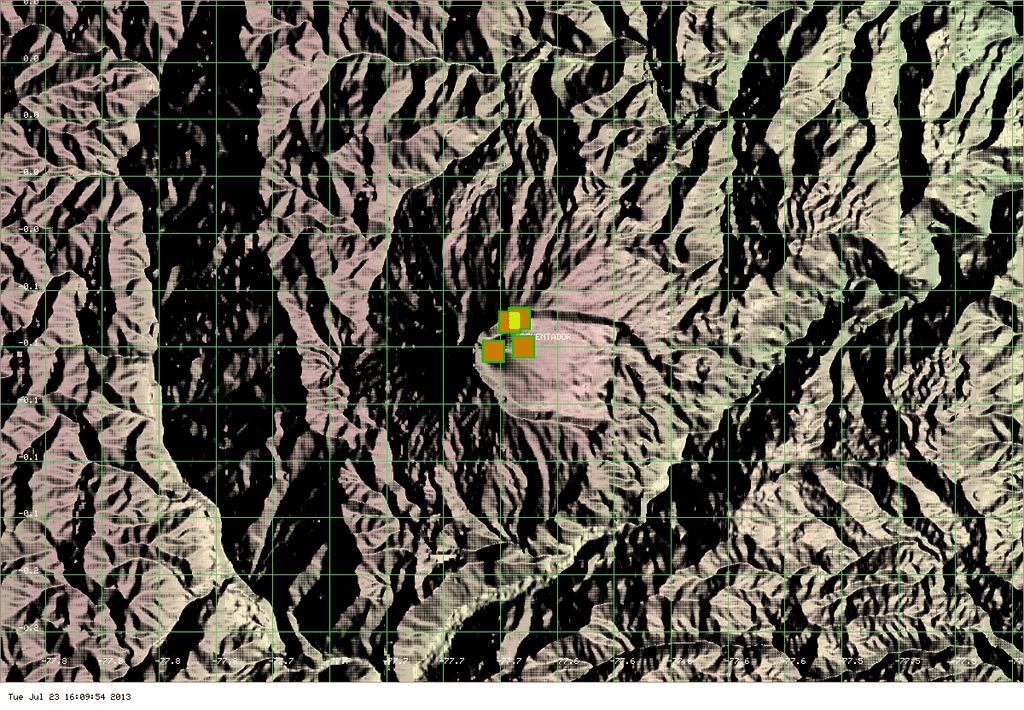 MODIS hot spots on Reventador volcano (MODVOLC, Univ. Hawai'i)
Small to moderate explosions and (probably) the effusion of a lava flow on the NE side of the cone continue. Seismic activity is high. 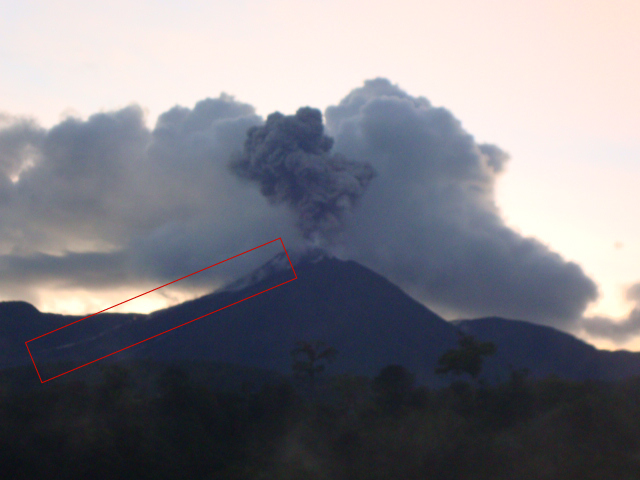 Explosion from Reventador on 19 July. The red rectangle marks the lava flow (IGPEN)
Effusive and explosive activity at the surface as well as seismicity have continued to increase. A lava flow is traveling from the summit crater on the southern side towards the SE flank and there are numerous small explosions which create ash plumes of up to about 1 km height. Read all
to top
Volcanoes Today, 17 July: Reventador
Wed, 17 Jul 2013, 11:28
The IG reported that in the last few days, increased seismic activity indicative of increased eruptions has been noticed at the volcano. Seismic data also indicated the presence of a lava flow travelling down the SW slope of Reventador's intracaldera cone.
Reventador volcano (Ecuador) activity update
Sun, 7 Jul 2013, 15:36 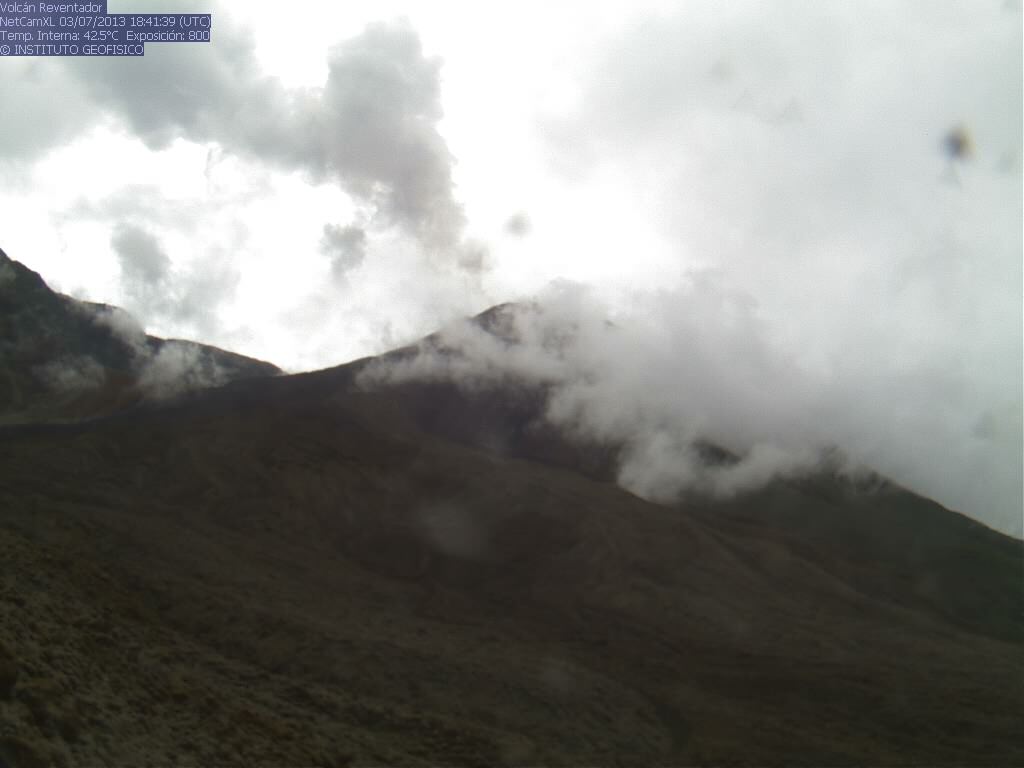 Current webcam view of Reventador (IGPEN)
An increase in seismic activity has occurred today. A steam plume can be seen rising above the volcano and a hot spot at the summit continues to be visible on MODIS satellite data, suggesting continuing lava extrusion. 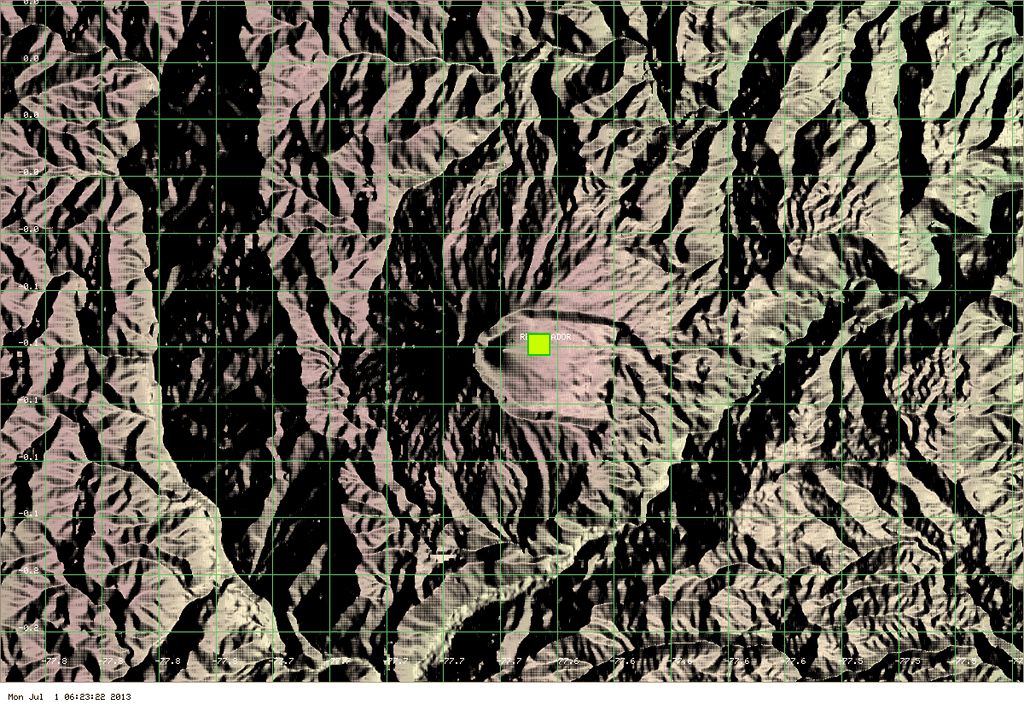 MODIS hot spot data (past 2 days) for Reventador volcano (ModVolc, Univ. Hawaii)
IGPEN characterizes the activity as moderate with seismic activity mainly related to internal fluid movements as well weak pulses of tremor and explosion signals. The volcano is hidden in clouds most of the time, but a thermal anomaly has become visible at the summit again on recent MODIS satellite data, possibly related to a recent small effusion of lava there.
Reventador volcano (Ecuador) activity update: steam and ash emissions
Fri, 28 Jun 2013, 14:51 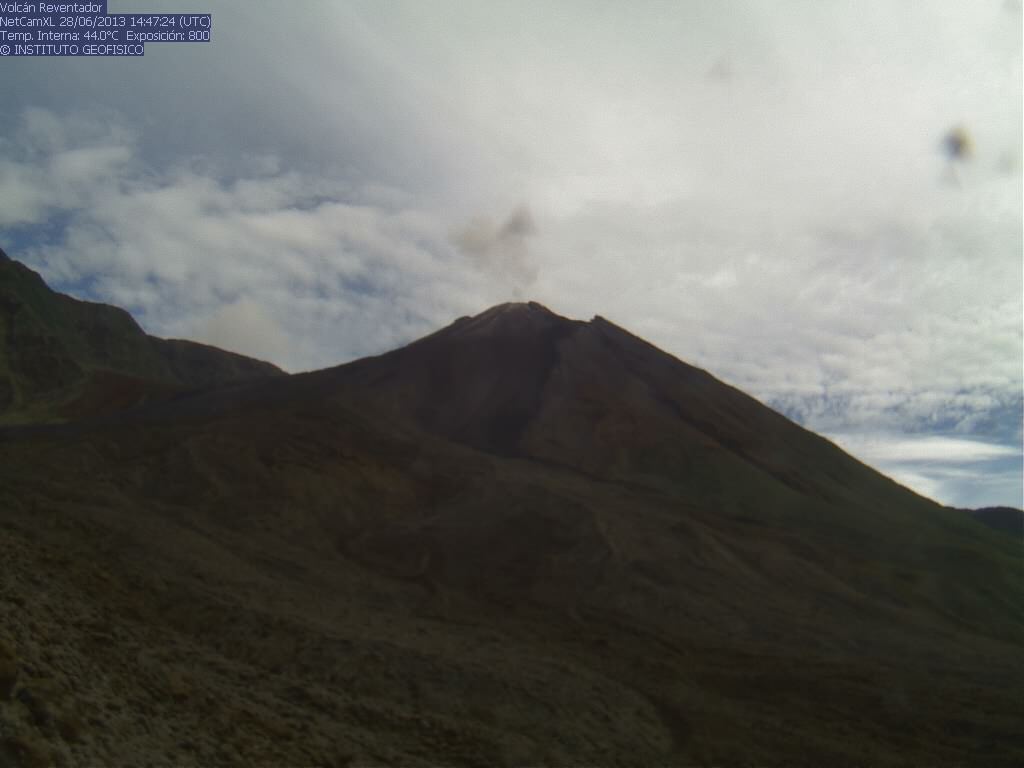 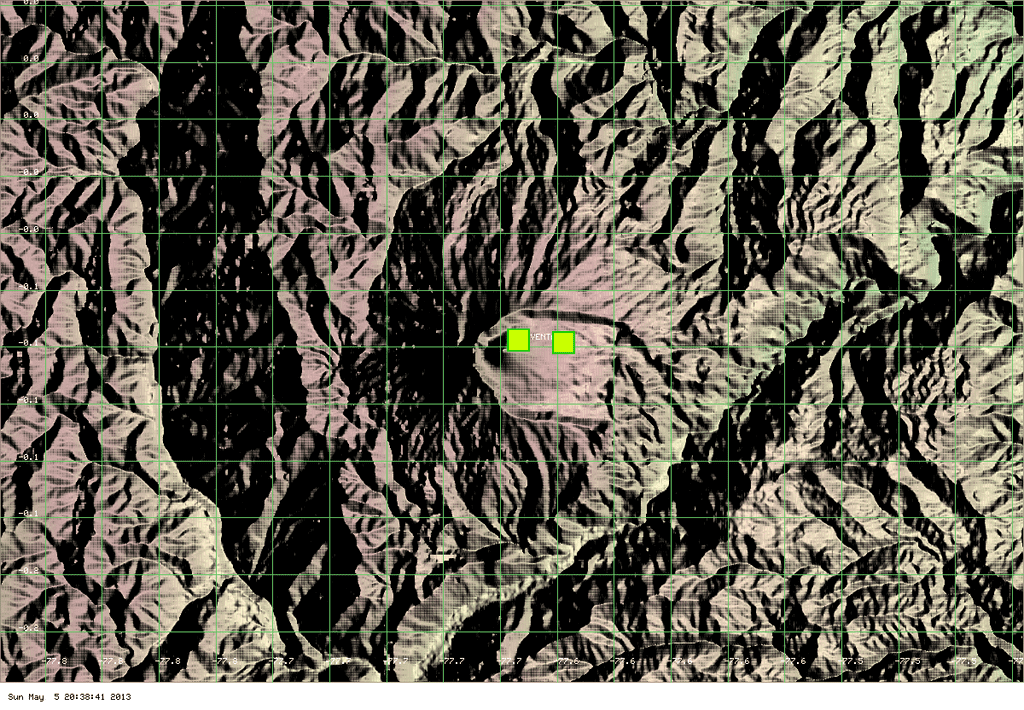 MODIS hot spot data (past 2 days) for Reventador volcano (ModVolc, Univ. Hawaii)
Activity has remained moderate with occasional explosions and possibly the emplacement of a hot avalanche or lava flow on the eastern flank, where a new hot spot on the latest MODIS satellite data can be seen, in addition to the summit where a lava dome is active.
Reventador volcano (Ecuador) activity update
Thu, 2 May 2013, 12:24
Last night, emissions of steam and some ash produced a column rising bout 1 km above the crater.
to top
Reventador volcano (Ecuador) activity update
Wed, 1 May 2013, 09:12
Activity remains moderate with frequent small explosions detected on seismic signals and strong degassing producing a plume that was observed yesterday rising 800 m.
First visit to our site? If you havn't done it yet, download the Volcanoes & Earthquakes app to get one of the fastest volcano news online:
Android | IOS

Kuril Islands expedition
The Kuril islands form one of the most active volcanic chains in the world, but are very difficult to access. From time to time, we organize expeditions to some of these remote and still unspoiled islands. Adventure guaranteed!
Strongest quakes

Volcanoes in the Solar System
The Earth is not the only place with volcanic activity. Active volcanism also occurs at at least 3 other bodies in our Solar System.
Hawai'i

Volcano Tours on Hawai'i
The Hawaiian Islands are not only home to the most active volcanoes in the world, Kilauea and Mauna Loa on the Big Island, but also boast a unique natural environment. Born by volcanic activity of a very active hot spot in the middle of the Pacific Plate, they are a showcase of natural history.
AllQuakes

Find an earthquake
Look up quakes anywhere in the world, near your city or region!
Get the ad-free version!
Why is there advertising on this site?
Support us - Help us upgrade our services!
We truly love working to bring you the latest volcano and earthquake data from around the world. Maintaining our website and our free apps does require, however, considerable time and resources.
We need financing to increase hard- and software capacity as well as support our editor team. We're aiming to achieve uninterrupted service wherever an earthquake or volcano eruption unfolds, and your donations can make it happen! Every donation will be highly appreciated. If you find the information useful and would like to support our team in integrating further features, write great content, and in upgrading our soft- and hardware, please make a donation (PayPal or Online credit card payment).