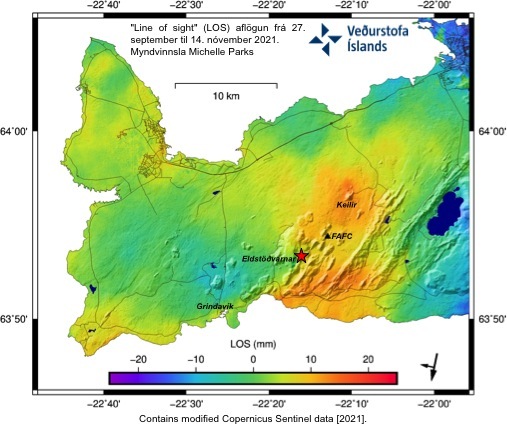 Yellow-to-red colors depict a new inflation on the Reykjanes peninsula (image: IMO)
The effusive eruption at the volcano has already ended or has remained mostly calm since 18 September as lava flows have stopped.
During the eruption, instruments continued to detect a deflation over the eruption site as magma used to leave from the deep chamber and pushed its way up to the surface.
However, GNSS and InSAR instruments observed a new inflation on the Reykjanes peninsula since the end of September. This is likely reflecting a renewed magma intrusion and migration under the surface, supported also by continued deformation of the surface.
A swarm of small earthquakes occurred in late September, located in the south of Keilir area, that may be related to a new batch of magma rising inside the volcano's conduits, although no new ground deformation has been detected during this time period.
The current inflation may not be associated with a new impending eruption.
This may take years or decades what will happens next at Reykjanes peninsula.
Source: Icelandic Meteorological Office volcano activity update 19 November 2021 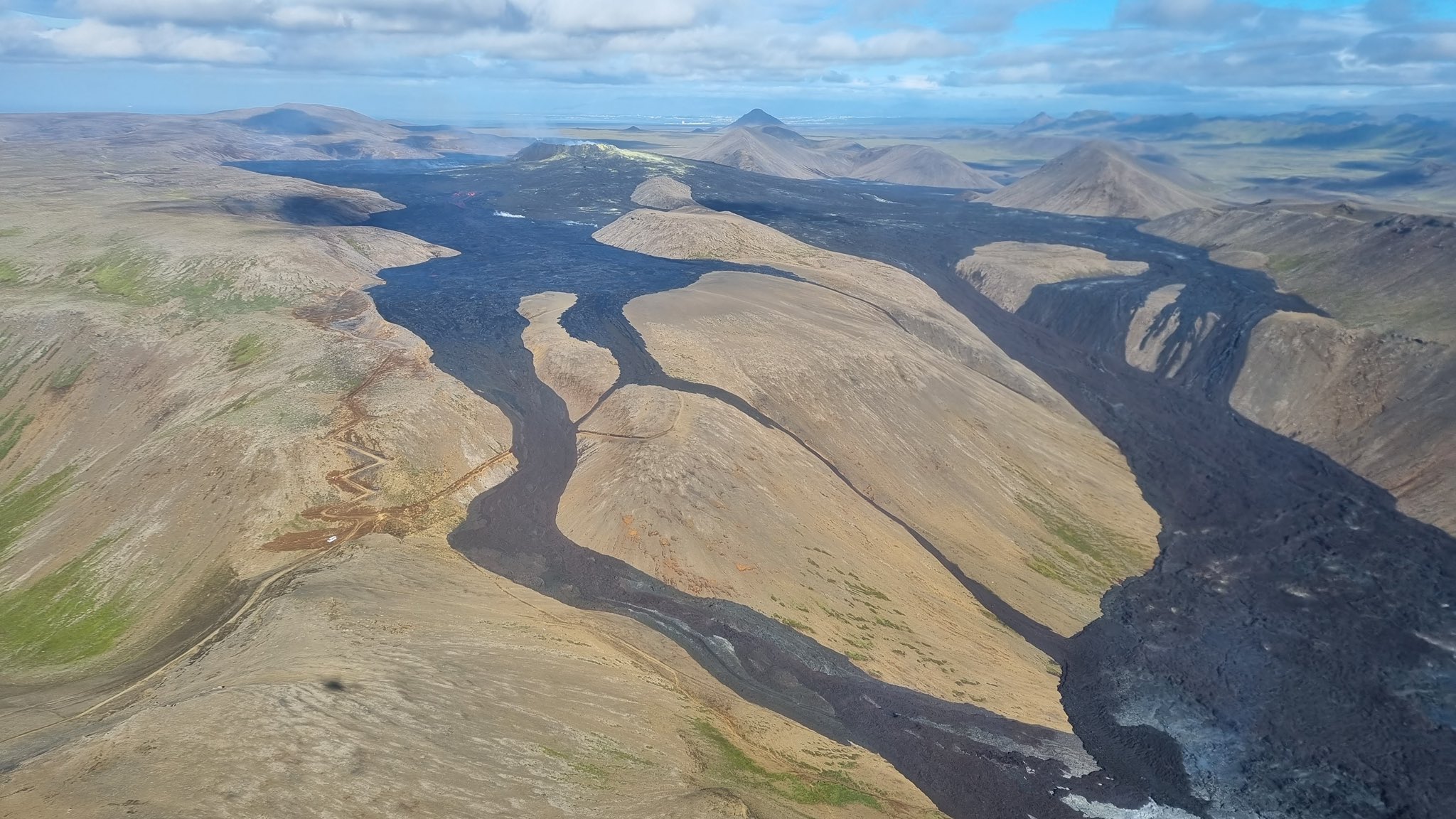 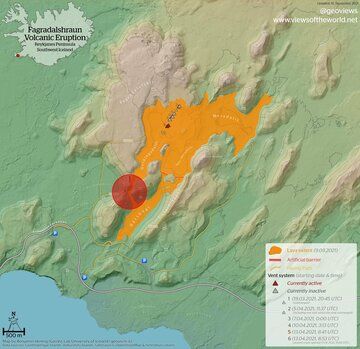 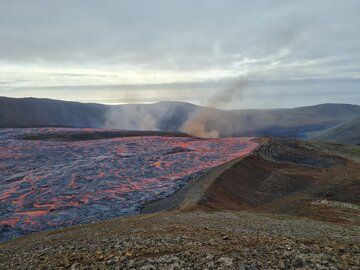 Lava flows just before the overtook the artificial dam (image: @EIlyinskaya/twitter)
After the resumption of the effusive eruption at the current site one week ago, the activity shows signs of increasing.
It proves a formation of new lava flows in the upper part of the Nátthagi valley that have continued to fill up the valley.
The effusion of lava continues at elevated discharge rate. This is most likely reflecting at higher pace of the lava that overtook the artificial dam, crossed the hiking trail and leading towards the southern ring road.
Nátthagi valley by now is largely filled with lava flows. 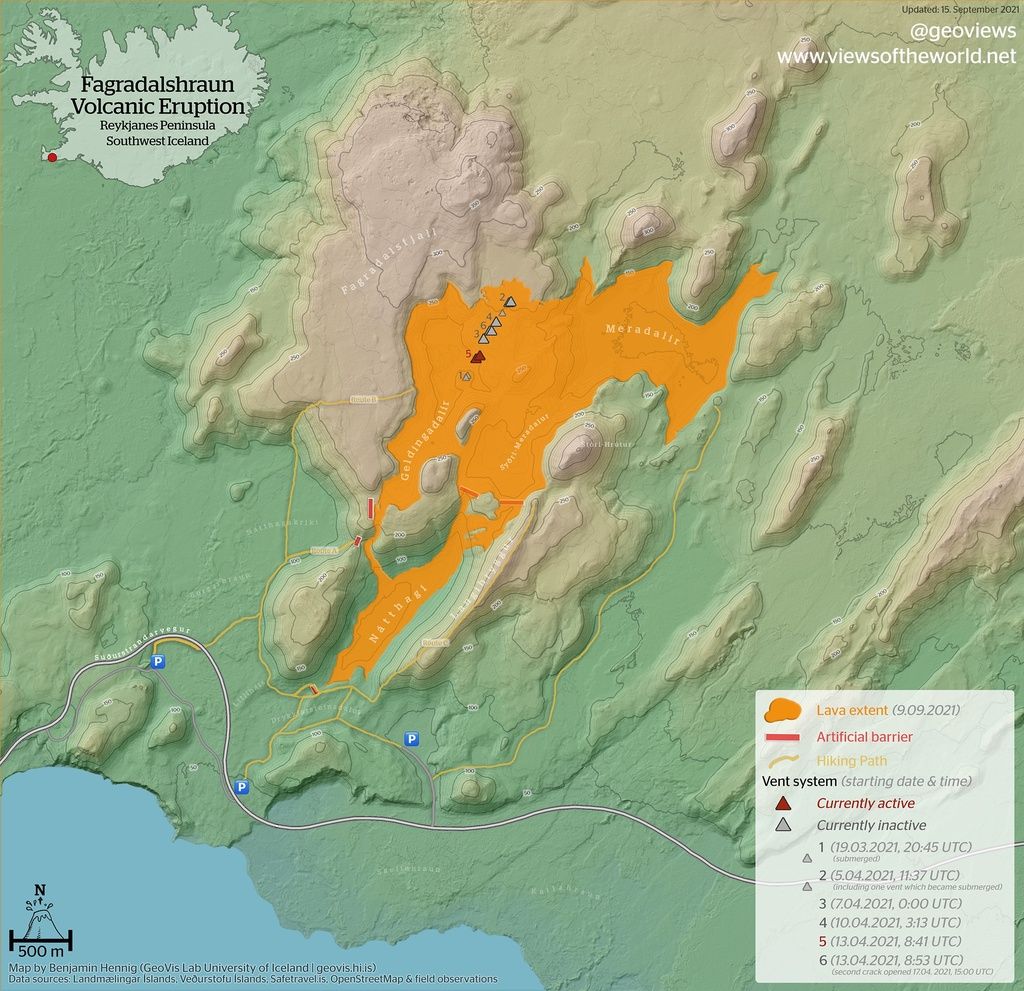 Fagradalsfjall volcano (Reykjanes peninsula, Iceland): activity is back after 7 days of calm and illuminates sky over Grindavik 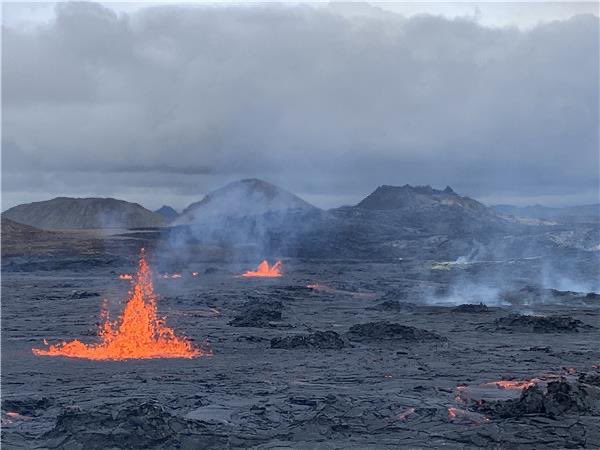 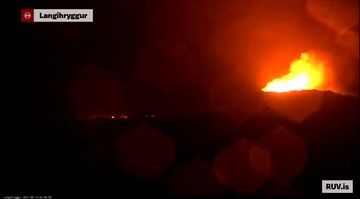 Glowing steam at the current eruption site from live webcam accompanies the activity at the time of this update (image: Youtube/RÚV) 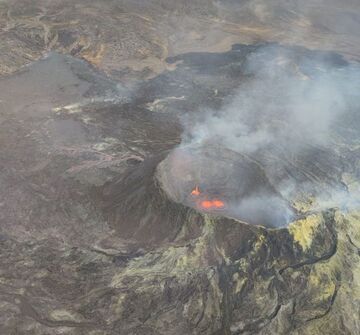 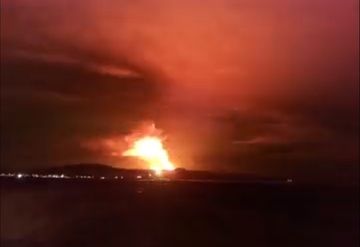 Glowing steam illuminates the sky over Grindavik (image: @Vedurstofan/twitter)
After the longest break of 7 days of apparent calm in the effusive activity, it picked up again on 11 September as a new lava flow returned to the western flank of the main crater and continues to descend into the Geldingadalir valley.
Small lava fountains are being observed in the field of lava in the Geldingadalir valley and continue to erupt.
The activity quickly intensified accompanied by a strongly rising signal of volcanic tremor indicating rapid magma flux towards the surface. 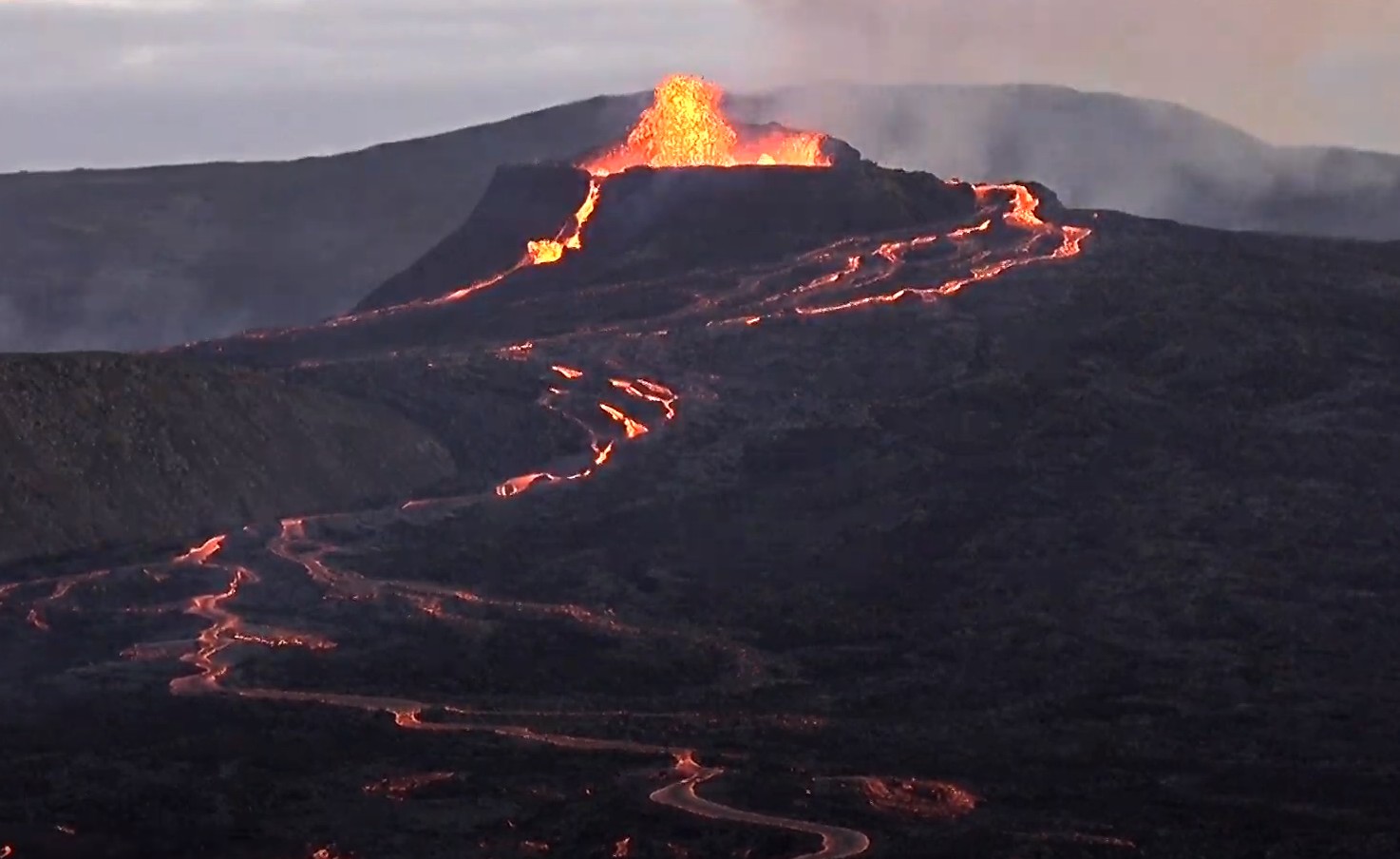 Lava fountain and two lava flows this morning at Fagradalsfjall in Iceland (image: RUV webcam)
The eruption continues in a very similar way as during the past days, with alternating pulses of lava erupting from the vent and quiet phases, at a rhythm of 12-16 hours approximately between the lava pulses.
During the active phases, the crater fills with lava and "boils" over, often forming fountains, and forms multiple lava flows on the surface.
This morning, a new lava flow made its way towards the south and then turned east, while a smaller lava flow emitted a bit further to the west continued southwards towards Natthagi valley (s. image).
The size of the cone is constantly growing although its diameter at the top has decreased. As a consequence of the smaller volume of the bowl-shaped crater, the lava fountains are rising taller.
First visit to our site? If you havn't done it yet, download the Volcanoes & Earthquakes app to get one of the fastest volcano news online:
Android | IOS 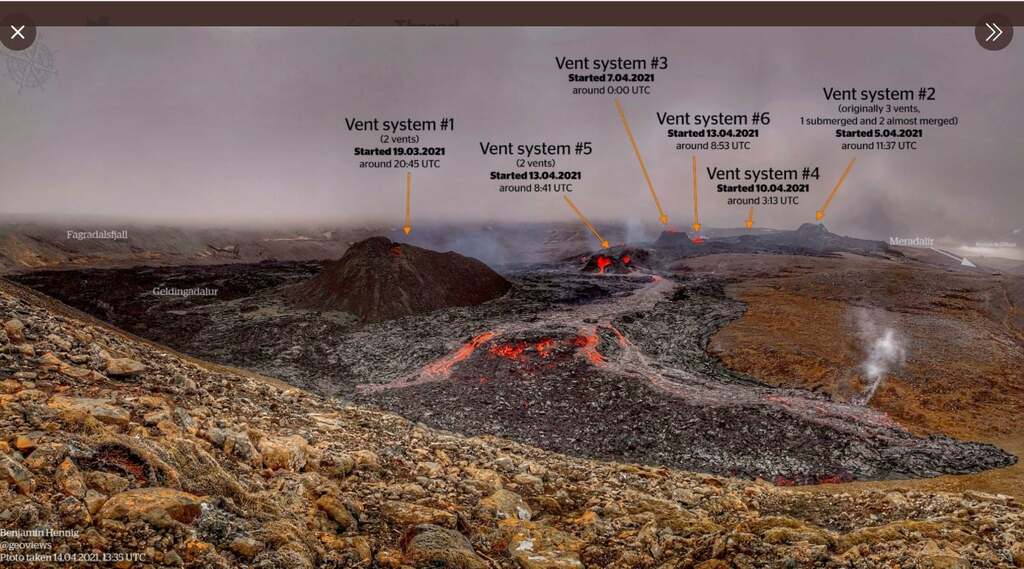 Overview of the active vents during the eruption so far (as of 3 May 2021)
A strong seismic crisis has been occurring on the Reykjanes peninsula near Fagradalsfjall mountain since mid Feb 2021, involving several magnitude 5+ and thousands of smaller ones. Volcanic tremor has appeared recently as well, indicating that magma movements underneath are likely accompanying and/or causing the seismic swarm. A new eruption in the area started on 19 March 2021 evening.
Webcams: Watch the eruption on the RUV webcam
New: Several live streams of mbl.is 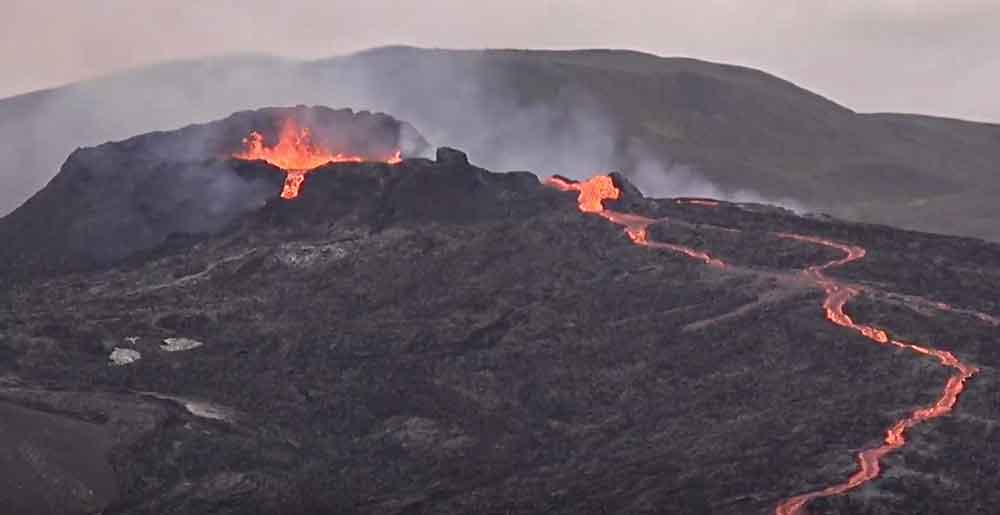 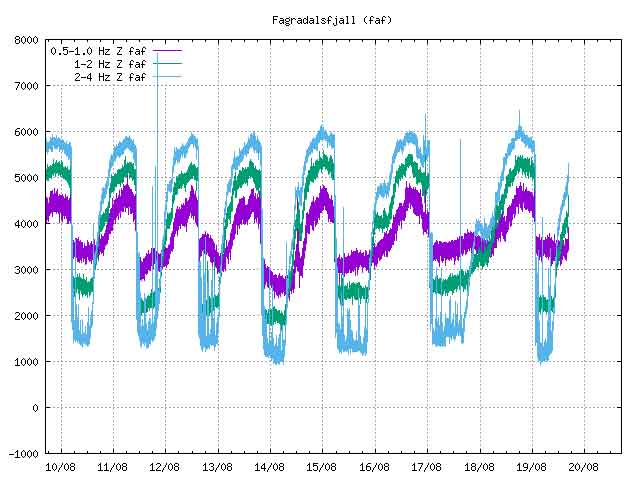 Oscillating tremor reflecting the regular magma surges (image: IMO)
The eruption continues with no signs of ending, even though it has been going through rhythmically alternating phases of very low to very high levels. Roughly every 24 hours, it changes from one to the other extreme.
When it is high, the crater is filled with a lava lake that overflows on its rims and produces spectacular flows, as can be seen in the recent video below or in the view of the webcam right now (attached); when it is low, there is usually no visible activity at the surface.
Video:

Volcanologist Þorvaldur Þórðarson explained that these lava pulses are likely caused by large gas bubbles rising through the magma in the underground feeding system, pushing the magma out of the vent onto the surface.
Since these lava surges come at very regular intervals, these large gas bubbles must rise in very orderly pattern. Nature likes such regular processes and creates order,- think of the rhythmic behavior of geysers, for example.
The gas bubbles that are responsible for the peaks of activity at Fagradalsfjall are of course orders of magnitude larger than most similar phenomena. Likely, they originate at the top of the magma source in the upper mantle at 15-17 km depth, and once large enough to overcome a critical threshold of some sorts, they start rising and pushing the magma column upwards, resulting in the surface activity seen a short time after.
Older updates
Show more
Try our free app!

Cotopaxi Eruption 2015 - updates
News and updates about the new eruption at Cotopaxi volcano, Ecuador, that started on 14 August 2015
Largest volcano

Do you know which is the biggest volcano in the world?
Nyiragongo

Nyiragongo volcano photos
Nyiragongo (DR Congo) has the world's largest and most active lava lake. Enjoy our pictures taken during several expeditions over the past years.
Volcano Calendar 2020

Volcano Calendar 2020
We're proud to present our 2020 volcano calendar: 13 different and attractive images of volcanoes, volcanic landscapes and phenomena taken during volcano tours over the past two years.
Krakatau to Bali

Tour photos May 2016
A selection of photos taken during our Java photo tour by Uwe Ehlers.
Get the ad-free version!
Why is there advertising on this site?
Support us - Help us upgrade our services!
We truly love working to bring you the latest volcano and earthquake data from around the world. Maintaining our website and our free apps does require, however, considerable time and resources.
We need financing to increase hard- and software capacity as well as support our editor team. We're aiming to achieve uninterrupted service wherever an earthquake or volcano eruption unfolds, and your donations can make it happen! Every donation will be highly appreciated. If you find the information useful and would like to support our team in integrating further features, write great content, and in upgrading our soft- and hardware, please make a donation (PayPal or Online credit card payment).