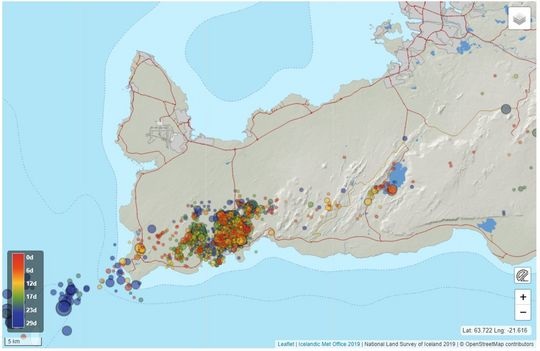 The seismicity around Grindavík last week (image: IMO)
The Icelandic Met Office (IMO) reported that in mid-May deformation data (GPS and InSAR measurements) started to show again signs of inflation, suggesting that a third intrusion since the beginning of this year is occurring west of Thorbjörn. The intrusion began around mid of May but the seismic activity started to increase toward the end of the month (30 May). About 2000 earthquakes have been detected since then and several events are located East of Thorbjörn, few kilometers North of the town of Grindavík. The largest earthquake of this swarm occurred on 13 June with magnitude M 3.5. Read all
Mt. Thorbjorn volcano (Reykjanes peninsula, Iceland): decreased seismic activity; possible re-inflation
Thu, 28 May 2020, 08:57

Earthquakes detected during the last 48 hours at the Reykjanes peninsula (image: IMO)
The Icelandic Met Office (IMO) reported that the seismic activity has decreased on Reykjanes peninsula in recent weeks. During the past week (20-27 May) around 120 earthquakes were located there, fewer than in the previous week when they were just more than 200. The largest earthquake was recorded with magnitude M 2.1. Read all
Show more
Mt. Thorbjorn volcano (Reykjanes peninsula, Iceland): seismicity continues at low levels
Thu, 7 May 2020, 08:50

Earthquakes during the last 48 hours at the Reykjanes peninsula (image: IMO)
The Icelandic Met Office (IMO) recorded an earthquake with magnitude M 2.5 at 16:55 local time occurred N of Grindavík. The earthquake was felt in Grindavík. Considerable seismic activity has been ongoing in the area during the last weeks in connection with deformation in the area. The deformation is measured at a slower rate than in January, but still continuing in magma accumulation at depth. The deformation is occurring in the same location as before. Read all
to top
Mt Thorbjorn volcano (Reykjanes peninsula, Iceland): renewed inflation
Fri, 20 Mar 2020, 06:42
The Icelandic Meteorological Office (IMO) report that the inflation and associated uplift that occurred around Mt Thorbjorn volcano in January-February has started again. The deformation is occurring in the same location as before, but at a slower rate. The uplift started in January but paused temporarily at the end of February. The IMO suggest that since the beginning of March, the uplift is about 20 mm. The deformation is believed to be caused by continued magma accumulation at depth. The head of the National Hazard Monitoring Group at the IMO explains that these events doesn't not guarantee that there will be an eruption any time soon. Read all
Mt. Thorbjorn volcano (Reykjanes peninsula, Iceland) activity update: strong earthquake detected
Fri, 13 Mar 2020, 09:19

Earthquakes during the last hours at the Reykjanes peninsula (image: IMO)
The Icelandic Met Office (IMO) recorded an earthquake with magnitude M 3.2 at 16:17 local time near Kleifarvatn yesterday. Around 30 smaller earthquakes have been measured in there since 1 March. An earthquake of this magnitude (>M3.0) last occurred in August 2019. Earthquakes are common in the area. Read all
to top
Mt. Thorbjorn volcano (Reykjanes peninsula, Iceland) activity update: seismic unrest continues; one earthquake recorded
Mon, 2 Mar 2020, 10:48 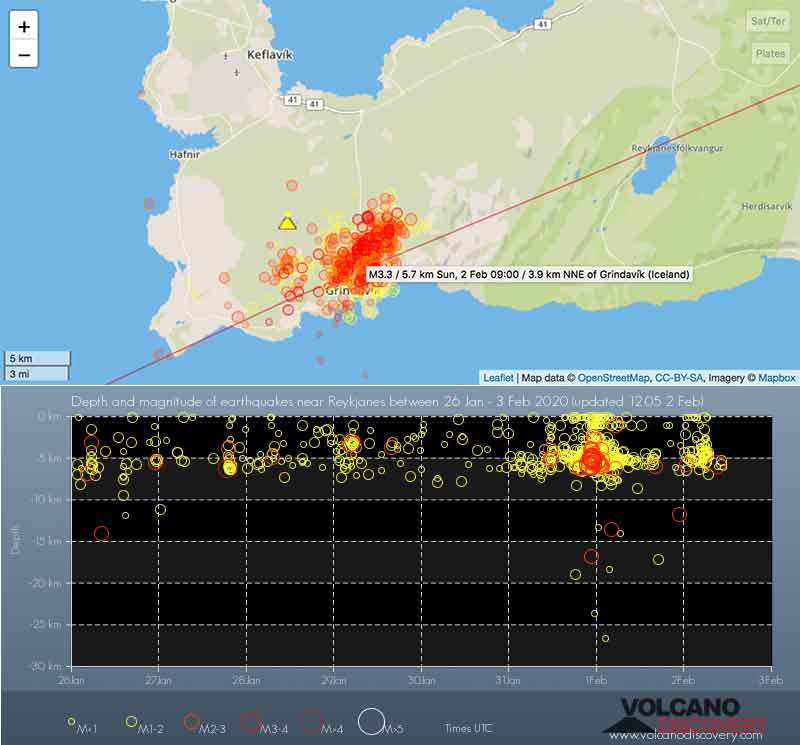 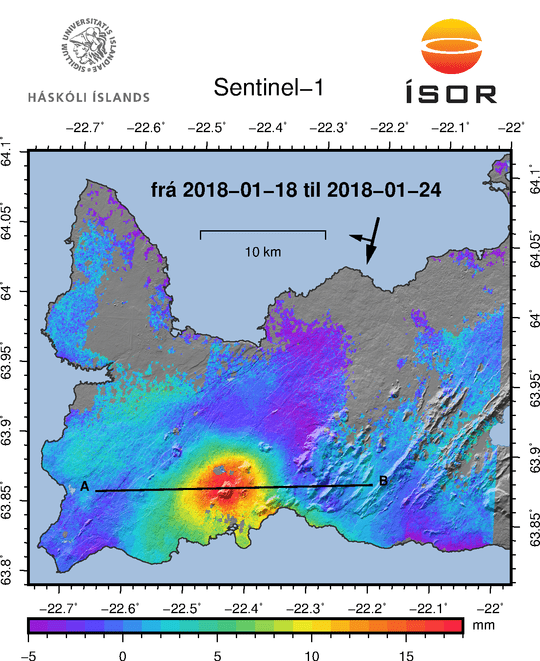 InSAR data showing inflation. Credit: IMO.
IMO reports: An inflation has been detected since January 21st and is centred just west of Mt. Thorbjorn on Reykjanes peninsula. The inflation is unusually rapid, around 3-4 mm per day and has accumulated to 2 cm to date. It has been detected both on continuous GPS stations and in InSAR images. The inflation is most likely a sign of magma accumulation at a depth of just a few km. If magma accumulation is causing the inflation, the accumulation is very small, with the first volume estimate is around 1 million cubic meters. Read all
Reykjanes peninsual (Iceland): shallow magnitude 4.8 earthquake
Sun, 13 Oct 2013, 21:39

Location of this morning's earthquakes on the SW tip of the Reykjanes peninsula of Iceland
A shallow (10 km) magnitude 4.8 earthquake with many pre- and aftershocks (or a seismic swarm) occurred this morning (Sun) at 07:34 UTC at the SW tip of the Reykjanes peninsula, on the SW active rift zone. The swarm of earthquakes included several quakes of magnitude 3 and higher. The strongest earthquake was widely felt in SE Iceland. Read all
Iceland: M4 earthquake and swarms on Reykjanes Peninsula and Kolbeinsey Ridge
Fri, 31 Aug 2012, 07:08 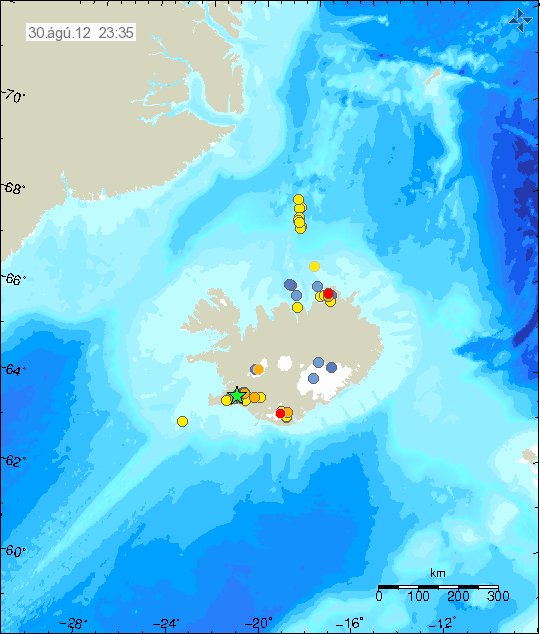 Earthquakes on and around Iceland on 30 Aug - the Kolbeinsey Ridge is the area with the yellow dots to the north (map: Icelandic Met Office)
Yesterday, there was a lot of earthquake activity on Iceland. At noon, a swarm with about 50 quakes partly preceded and followed a magnitude 4.2 quake at 5.8 km depth beneath the Reykjanes peninsula, near the axis of the the SW volcanic rift zone. Most quakes were between magnitudes 1-2 and at around 5 km depth. Read all
to top
Earthquake swarm on Reykjanes Ridge 70 km offshore SW Iceland indicates possible magma intrusion
Wed, 8 Feb 2012, 00:01 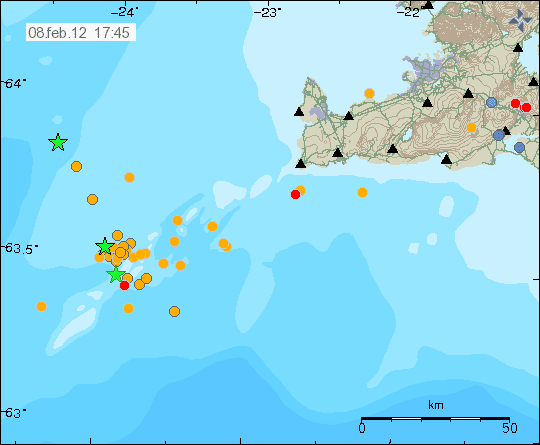 Location of the seismic swarm on 8 Feb 2012 (Icelandic Met Office)
A seismic swarm has occurred on the Reykjanes Ridge 70 km offshore the SW tip of Iceland. About 40 earthquakes with magnitudes mostly between 2 and 3 were recorded. The Reykjanes Ridge is part of the active SW rift zone running through the western part of Iceland. Read all
First visit to our site? If you havn't done it yet, download the Volcanoes & Earthquakes app to get one of the fastest volcano news online:
Android | IOS

Current activity of Bardarbunga volcano, Iceland
An intense seismic crisis started at Bárdarbunga volcano on 16 August 2014 and is continuing at the time of writing (23 Aug). It may or may not lead to a volcanic eruption, possibly under the Vatnajökull ice cap.
Follow updates as news come in!
Earthquake lists

Quakes by country or region
Look up earthquakes in your country, region or state!
Short tours

1-3 day excursions
If you're interested in volcanoes, there are a number of excursions you should not miss if you're in the area: hike to the craters of Stromboli volcano, climb Etna volcano, get to know the unique volcanic history of Santorini - some examples of shorter (1-3 days) tours and excursions we offer.
What is a volcano?