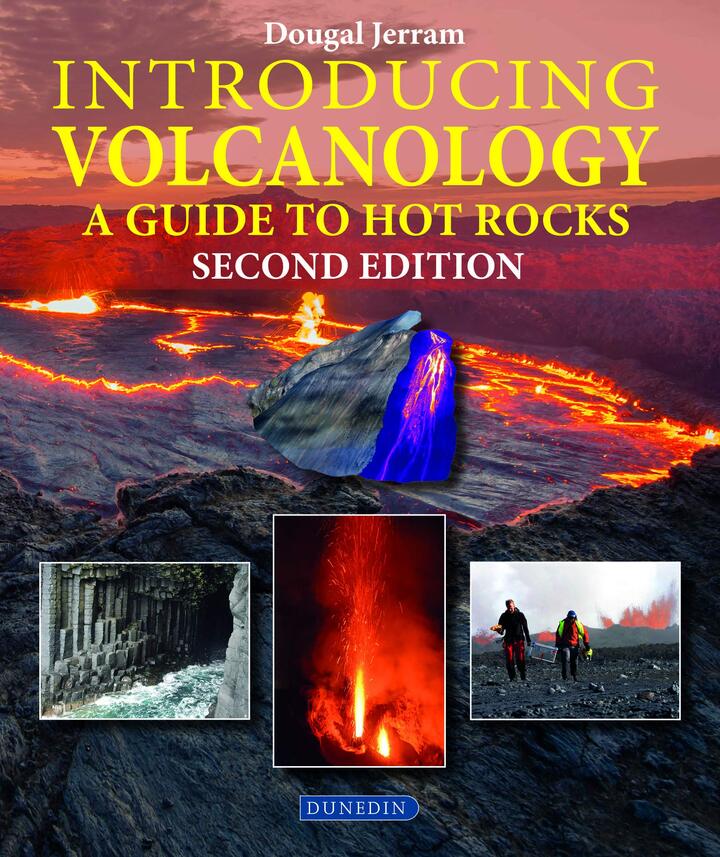 Introducing Volcanology - A Guide to Hot Rocks
"Volcanoes have the power to rock our world", the author starts in the preface of what is now the second edition of one of the most popular general-audience textbooks about volcanoes and volcanology.
Volcanologist Prof. Dougal Jerram (Univ. Oslo) is internationally recognized for his talent in bringing earth science close to a wide audience. The completely renewed edition of the already very successful first edition of "Introducing Volcanology" is nothing but a masterpiece when it comes to the difficult task to translate sometimes rather complex scientific knowledge into a way an interested but non-specialist reader can both understand and enjoy reading, while keeping the information up-to-date, precise and short at the same time.
One of the great aspects of the book is also its format and layout: not too tall, with soft, coffee-resistant coated cover, nearly square, it's in between the size of a classic textbook and pocket format. Its generous wide page layout allows for beautiful and easy-to-grasp wide-format illustrations and a pleasant two-column text flow formatted with an inviting typography. Forget those menacingly closely spaced paragraphs full of tiny text loaded with citations, numbers and technical terms one might be used from older text-books!
It's also not too long - the author manages to cover all essential topics that one should expect from such a book in less than 140 pages, and the book is only about 1 cm thick, doesn't mind bending and heavy use in almost any environment or position... Very well done!

After a short introduction, the author explains the main concepts related to volcanoes following a line of thoughts that seems most suitable: we look at volcanoes from a top down perspective: volcanoes are not only a very visible part of landscape above the surface, but since they are formed by the eruption of molten rock or magma, they must build on a system rooted deep underneath our feet.
It is what is hidden there that is most difficult to understand, but equally fascinating when explained by such a book.

With a subject as varied as volcanology, the question "How do I start" is important. Dougal answers it: if you can, go to see some volcanoes nearby! For many of us, this is actually, how we became first interested in volcanoes. Some "real" live volcanoes are often closer than many might think: think of the ones in Italy - Vesuvius, Stromboli, Etna, or on Iceland, or in the Cascade Rage.
Even if you're not close to an active volcano, you likely will find remnants of older volcanoes, i.e. volcanic rocks, in places not too far from your home. Another way to start diving into the world of volcanoes involves having a closer look at what forms volcanic rocks, the minerals, which can be grouped into just a few of important ones. Understanding the formation of these minerals is a powerful tool to reconstruct the history of many volcanoes and reveal what happened underground before they erupted.

From the composition of the earth to various types of eruptions

Chapters 2-7 cover a classic line of subjects in volcanology: first, we learn how our earth is structured in layers from the core, the mantle and the crust, and why the earth's interior is still hot and how some of its rocks in the uppermost mantle can melt to form magmas.
The next chapter introduces the modern theory of Plate Tectonics, which allows to understand why and where magmas formed in the upper mantle sometimes rise to the surface and create volcanoes. Accompanied by great illustrations, such as for the Hawaiian Hotspot, we learn about the main types of plate boundaries, mantle plumes and physical processes such as decompressional melting, that are vital in understanding how magmas form. Even if most of these concepts are not familiar from everyday life, they are well explained without using mathematical formulae or complex graphics.

A volcano for each taste
To put the subject into a wider modern perspective - we leave Earth and take a look at volcanism outside earth: there's Mars with the giant of Mons Olympus shield volcano, Venus with its many recently discovered young volcanic features, and of course Jupiter's moon Io with its spectacular display of intense, possibly sulfur-driven volcanism. But as fascinating as they might all be, nothing matches the variety and accessibility of Earth's volcanoes: "There's a volcano for almost everyone's appetite", Dougal comments in his engaging and often humorous style.
Chapters 4 takes us to the types and scales of eruptions, as well as the resulting landforms and types of volcanoes. Chapter 5 is dedicated to probably the most known - and by volume by far the most significant - volcanic feature, lava flows and lava lakes. From a detailed description of how lava flows move and sometimes manage to cover vast areas, to how lava tubes form and why some volcanoes produce very sticky lava flows or even domes, columnar lavas found in many parts of the world and wondered at for their beauty and symmetry, and a brief excursion to mud volcanoes, this chapter is quite complete.
Chapter 6 covers the main aspects of explosive volcanism: learn why some eruptions are explosive, when magma explodes and does not flow away from the vent, and how this can result in deadly avalanches of hot ash and gas. It goes quite into detail describing different mechanisms that lead to explosive eruptions, as well as the great variety of deposits that come as result.
It is probably the next chapter 7, that must have been most challenging to write: on just 14 pages full of illustrations, the underground workings of a volcano are explained. What we know (and don't know) about the complex plumbing system that connects deep magma chambers via conduits in the form of dikes and sills eventually with the surface vents. It includes a section on diamond-bearing eruptions (kimberlites) as well as hydrothermal systems on land and on the sea floor.

Chapter 8 focuses on the role of volcanoes as an important contributor to the evolution of life, their potential to impact climate, especially during major events of global scale that have occurred multiple times in the geologic past, but - fortunately - never in modern history. It discusses the role of "Large Igneous Provinces" (flood basalts) in the evolution of Earth, as well as the recently much-heard-of "supervolcanoes" such as Yellowstone that had eruptions of scales beyond everything mankind has witnessed in the past few thousands of years (and hopefully will not need to in the coming).

Our understanding of volcanoes , especially active ones, has been greatly advanced by modern monitoring using a range of geophysical, geochemical and remote-sensing techniques. As more and more data are being collected and science advances, we are getting better and better at understanding the complex interactions and processes that for example lead to an eruption. Chapter 9 explains modern volcano montoring using recent examples such as the 2010 Iceland eruption for deformation, Colima in Mexico for gas and thermal monitoring, or Erta Ale in Ethiopia and Stromboli in Italy for remote imaging surveys.

Volcanoes and Men
This leads to the maybe nicest chapter in the book: a history of the sometimes loving, sometimes tragic relationship between volcanoes and humans. The last, and perhaps largest supervolcano eruption on Toba about 2 million years ago might have contributed to the emergence of man as species. We relive the drama at Pompeii and Herculaneum when Vesuvius erupted in 70 A.D. Jumping into the moder era, the book has great accounts on the 1980 Mt. St. Helens eruption and Iceland in 2010, when it caused air traffic to halt for a week across Europe, the large Holohraun eruption in 2014-15, as well as the 2018 Lower Puna eruption on Hawaii, and the deadly tsumani from the collapse of Anak Krakatau in Dec 2018.
Finally, Dougal discusses the increasing role of volcano tourism, illustrating the associated risks with the accidents in recent years at Ontake (2014, Japan), White Island (2019, New Zealand), and Stromboli (2019, Italy). Mitigating, but not eliminating, risks when visiting volcanoes is something volcano monitoring and increasing understanding of each volcano's individual behavior can provide and should be advanced.
The only complaint about this final chapter is that it lacks putting the number of accidents at volcanoes in perspective. Reading it like it is, it might appear that the average risk when people visit volcanoes is quite high. But it should be noted that the examples listed are actually covering almost all volcano-tourism related fatalities worldwide for at least 2-3 decades, with total numbers of visitors likely being in the range of millions. Statistically, visiting volcanoes still has been at comparably low risk when compared to other activities or risks most of us assume on occasions. Visiting active volcanoes should be based on a personal risk-benefit balanced decision.

Dougal Jerram manages to captivate the reader from the beginning to the end, and takes him or her on a journey through the fascinating world of volcanoes. Accompanied by great and plentiful illustrations, an informative glossary, the language is personal, passionate, easy to follow, scientifically precise. Despite the rather short volume, it still goes quite in depth and detail.
It's particularly nice to see the second edition stuffed with examples from recent years, on volcanoes that are relatively easy to access and thus, relate to.

Dougal Jerram manages to captivate the reader from the beginning to the end, and takes him or her on a journey through the fascinating world of volcanoes. Accompanied by great and plentiful illustrations, an informative glossary, the language is personal, passionate, easy to follow, scientifically precise. Despite the rather short volume, it still goes quite in depth and detail. It's particularly nice to see the second edition stuffed with examples from recent years, on volcanoes that are relatively easy to access and thus, relate to.

Volcano Trip
Guatemala is a country with spectacular volcanic activity, wonderful landscapes, colorful villages and towns, friendly people.
Join a trip organized by an experienced Guatemalan guide and photographer Diego Rizzo together with VolcanoDiscovery to have a chance to watch the active volcanoes (Fuego and Pacaya) from up close! Get an in-depth experience of the powerful and turbulent natural processes at work and take stunning pictures!
Новости о вулканах

Hawai'i and Kilauea volcano photos
Lava flows, lava lakes, eruptions and aerial images from Kilauea on the Big Island of Hawai'i throughout the years.
Bárdarbunga

Bárdarbunga eruption 2014
Photos from the Holuhraun fissure eruption: large lava fountains and lava flows from close!
Why is there advertising on this site?
Sources: VolcanoDiscovery / VolcanoAdventures and other sources as noted.
Use of material: Most text and images on our websites are owned by us. Re-use is generally not permitted without authorization. Contact us for licensing rights.
Volcanoes & Earthquakes