Which is the most dangerous volcano in the world? 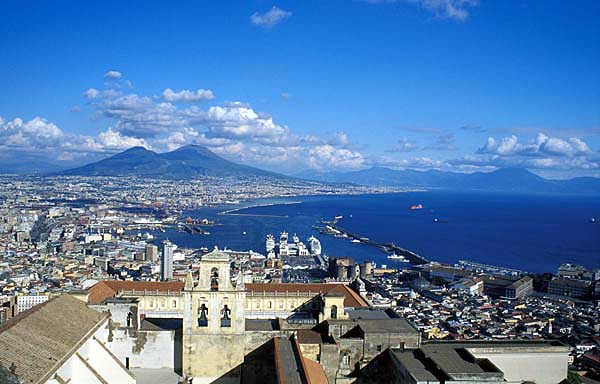 Vesuvius volcano seen from the city of Naples
The quick answer: Vesuvius volcano in the Gulf of Naples, Italy. The reason is that Vesuvius'typical eruptions are very explosive and the slopes of the volcano and immediate area surrounding the volcano are extremely densely populated; even the city of Naples is only about 20 km away from the volcano. In case of a major Plinian eruption, more than 3 million people could be at risk and an incredible value of infrastructure. Vesuvius has been silent since 1944 now, and might remain so for quite a time to come, but it is quite certain that it will wake up again, sooner or later, but on a human timescale (decades to centuries, in contrast to the so-called supervolcanoes). When it does wake up, it tends to start a new eruptive cycle with a large sub-plinian or plinian eruption.
In the past, every time Vesuvius erupted after a long interval, it has been highly destructive and killed thousands of people: a prehistoric eruption about 2000 BC devastating the present-day area of Naples, the famous Roman "Plinian" eruption of 79 destroying Pompeii and Herculaneum, and the even worse (in terms of damage) eruption of 1631 are worst-case examples of the type of eruption to expect when Vesuvius wakes up again. The Italian government has plans to evacuate 600,000 people living in the immediate risk zone on the lower slopes of the volcano, in case a new eruption seems likely, but it is quite doubtful whether such plans are realistic or could be effective. Now, the long answer: it depends... Which volcano is the most dangerous depends on your definition of dangerousness. A good measure is the total volcanic risk posed by the volcano. That in turn is best described as the integrated overall value of the product between the likelihood of an eruption of a given size and the damage caused by it. Supervolcanoes such as Yellowstone, if they were to erupt now as they probably did a million year ago, would threaten life and property globally, but withing reasonable human timescales, the likelihood of this happening is extremely small and mankind will most likely find own ways to harm itself long before we need a supervolcano.
For that reason, Vesuvius ranks high above even supervolcanoes in its "dangerousness". Other dangerous volcanoes include Nyiragongo, which poses a realistic risk to destroy the town of Goma at its southern slopes with fast running lava flows, and Merapi volcano near the city of Yogyakarta. Hundreds of villages and tens of thousands of people live less than 8 km away from the summit lava dome. Even a moderate eruption such as the recent one in Nov 2010 can therefore be a killer, and despite the best efforts of Indonesia's government to evacuate, there were hundreds of fatalities. A really big eruption would cause unthinkable damage and loss of life.
Попробуйте наше бесплатное приложение!

Krakatau volcano photos
Hundreds of photos from active Krakatau volcano in the Sunda Strait, Indonesia. Most of them taken during our various expeditions to this fascinating volcano.
Volcano Calendar 2014

Erta Ale volcano photos
During our numerous expeditions to Erta Ale and Dallol, we have documented the active lava lake and its surroundings and changes over the years.
Milos Geo Tour

Island of Venus
Milos Island in Greece is one of the most beautiful and photogenic islands of the Mediterranean. Its boasts breathtaking scenery of colorful volcanic rocks, some of the finest beaches of the country, a rich archeological heritage, great hospitality and delicious local cuisine. Come join us to explore this magical island on a 6-days geological tour!
Why is there advertising on this site?
Sources: VolcanoDiscovery / VolcanoAdventures and other sources as noted.
Use of material: Most text and images on our websites are owned by us. Re-use is generally not permitted without authorization. Contact us for licensing rights.
Volcanoes & Earthquakes