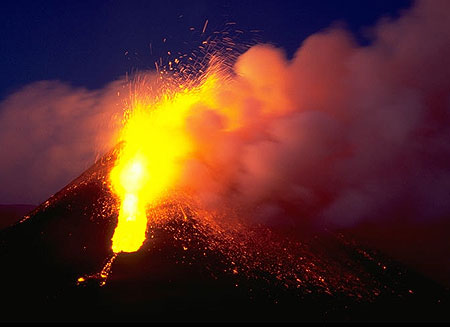 Eruption from Etna volcano
The word "volcano" comes from the Roman God of Fire, Vulcanus. Also the small volcanic island of Vulcano in the Eolian Islands off Sicily, was called after that god. Apparently, this island was highly active in Ancient times and people believed its crater was the chimney of the Vulcanus'forge,  where the hot lava and ash coming out from the crater were the visible evidence of his activity to forge weapons for the other gods.
On Hawai'i, the people attributed volcanic activity to the beautiful, but capricious and at times destructive goddess Pele, who loved fire and hated water.

Today, a volcano is the term for any place on the surface of the earth, where hot molten rock or magma is erupted or has been in the past.

Image pool
View user-submitted images and vote for the Photo of the Month!
Kilauea

Kilauea volcano photos
The most active volcano in the world with a record long lasting eruption since 1983: images of lava flows, lava lakes, explosions, lava meeting the ocean, aerials and more.
Walking Tours

Walking & Study tours
VolcanoDiscovery's signature tours for small groups: Discover volcanoes and volcanic areas from close with an expert in their field! These tours have a broad mix of activities and interests from photography, walking, study travel, nature & culture.
Pilot tours

Exploring the unknown
We sometimes invite you to "test" new itineraries or destinations with us. Such trips are a reduced cost and require a higher degree of flexibility, but often offer a great deal of adventure.
Interactive map

Volcanoes & Earthquakes
Look up active volcanoes and earthquakes worldwide on our web-app, featuring an interactive map you can embed on your website or use as stand-alone tool.
Why is there advertising on this site?
Sources: VolcanoDiscovery / VolcanoAdventures and other sources as noted.
Use of material: Most text and images on our websites are owned by us. Re-use is generally not permitted without authorization. Contact us for licensing rights.
Volcanoes & Earthquakes