(ВУЛКАН 1030 m / 3,379 ft)
Amasing volcano lies off the southern coast of Halmahera Island, Indonesia, on the small island of Bacan (Palau Batjan). Bukit Amasing (Amasing Hill) is the largest and NW most of 3 small andesitic volcanoes, the other two being Cakasuanggi and Dua Saundara. No recent activity is... [БОЛЬШЕ]

(ВУЛКАН 900 m / 2,953 ft)
Bibinoi volcano (Bukit Bibinoi, Bibinoi Hill) on the SE tip of Bacan Island is the largest and SE most of 3 volcanoes on the island, located off the south coast of Halmahera Island, Indonesia. Two other, smaller volcanic centres are Songsu and Lansa.
Binibnoi is separated ... [БОЛЬШЕ] 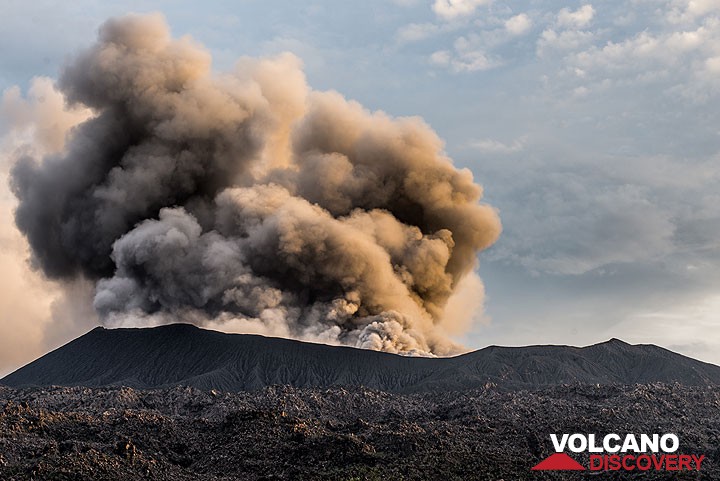 Ash emission from Dukono volcano
Dukono is a remote volcano on the island of Halmahera (Indonesia). There is not much information available due to its remote position, but Dukono is one of the world's most active volcanoes and has been in persistent activity since 1933. [БОЛЬШЕ]

(Стратовулкан 1715 m / 5,627 ft)
Gamalama (Peak of Ternate) is a near-perfect conical stratovolcano that forms the entire island of Ternate off the western coast of Halmahera. It is one of Indonesia's most active volcanoes. [БОЛЬШЕ]

(Стратовулкан 1635 m / 5,364 ft)
The 1635 m high stratovolcano fo Gamkonora is the highest peak on Halmahera.
It has had shifting shifting eruption centers that have produced an elongated series of summit craters along a N-S trending rift. Young-looking lava flows originate near the cones of Gunung Alon a... [БОЛЬШЕ]

(ВУЛКАН 630 m / 2,067 ft)
Hiri is a small 3-km-wide forest covered island immediately north of Ternate Island and the tip of a mostly submerged stratovolcano. It forms the northernmost of a volcanic chain off the western coast of Halmahera. There are no known historic eruptions. [БОЛЬШЕ] 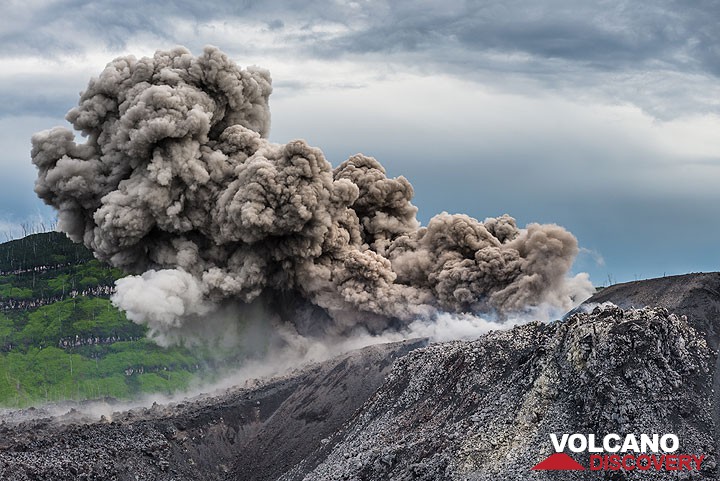 Strombolian explosion from the active vent in Ibu's lava dome (Dec 2014)
Only a few eruptions have been recorded from Ibu in historical time, the first was a small explosive eruption from the summit crater in 1911. An eruption producing a lava dome that eventually covered much of the floor of the inner summit crater began in December 1998. [БОЛЬШЕ]

(ВУЛКАН 1130 m / 3,707 ft)
Jailolo stratovolcano is in the center of a volcanic complex forming a peninsula west of Jailolo Bay on the western coast of Halmahera Island. Jailolo stratovolcano has not erupted in historic times, but there are young lava flows on the eastern flank. [БОЛЬШЕ]

Kiebesi volcano (Makian Island) seen from the NW with the prominent Ngopagita gully (image: Ruska Hadian, 1985, Volcanological Survey of Indonesia)
Makian volcano is one of Inondesia's most destructive volcanoes. It has had infrequent, but violent eruptions that have devastated villages on the island. Its eruption have been recorded since about 1550; the major eruptions in 1646, 1760-61, 1861-62, 1890, and 1988 caused extens... [БОЛЬШЕ]

(ВУЛКАН 1730 m / 5,676 ft)
Tidore volcanic complex forms a conisits of 2 volcanoes, the beautiful and conical Kiematabu peak (1730 m) in the south and the lower, broad volcano of Sabale volcano in north, containing a caldera and two cinder cones. Kiematabu peak is the highest volcano of the North Maluku is... [БОЛЬШЕ]

(ВУЛКАН 422 m / 1,384 ft)
Gunung Tigalalu (Mount Tigalalu) at the northern end of Kayoa Island lies almost exactly on the equator and is the southernmost of the volcanic chain off the W coast of Halmahera. The volcano has not erupted in historic times. [БОЛЬШЕ]

(ВУЛКАН 1035 m / 3,396 ft)
Gunung Tobaru (also known as Gunung Lolodai) is a small and little known andesitic volcano in northern Halmahera WSW of Dukono volcano and NNE of Ibu volcano. It is believed it is still active, although no recent eruptions are known. [БОЛЬШЕ]

(Комплекс вулкана 979 m / 3,212 ft)
Todoko-Ranu Volcano in north-western Halmahera 15 km SW of Gamkonora volcano is a part of a larger volcanic complex, which contains 2 calderas. One of the calderas, Ranu caldera, contains a crater lake. [БОЛЬШЕ]
First visit to our site? If you havn't done it yet, download the Volcanoes & Earthquakes app to get one of the fastest volcano news online:
Android | IOS 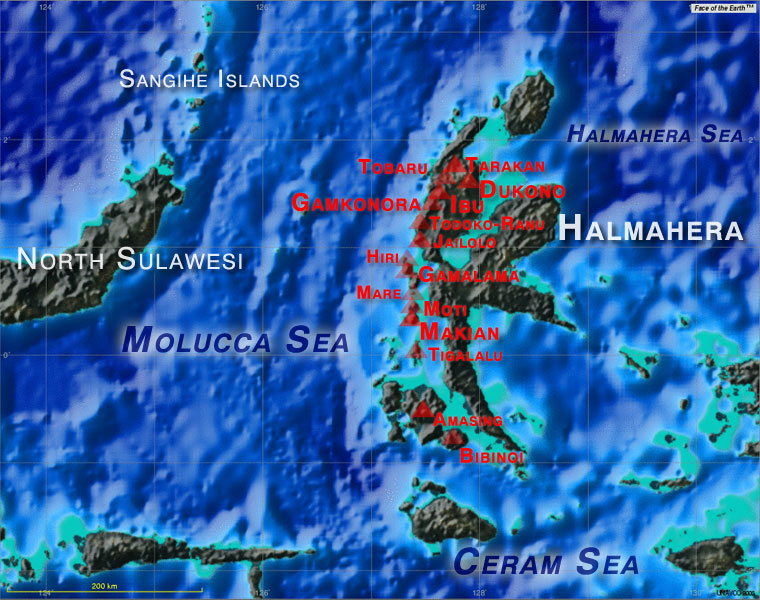 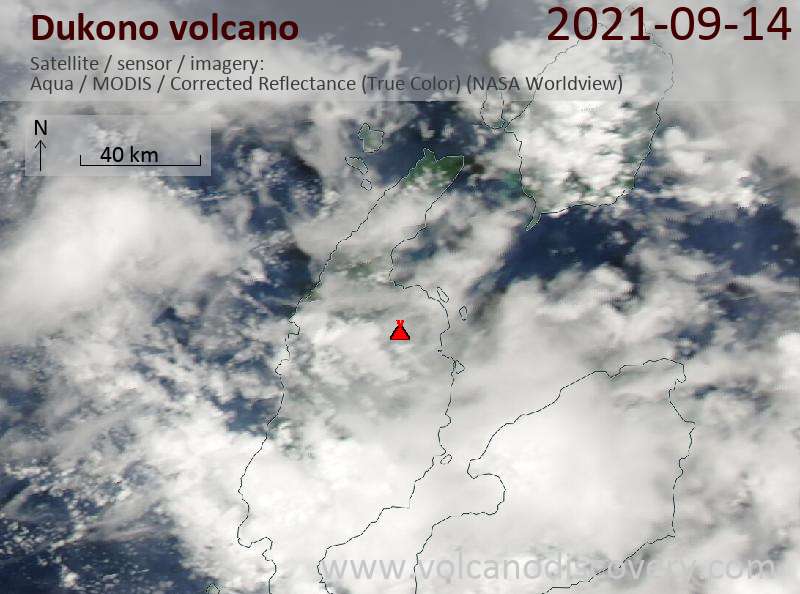 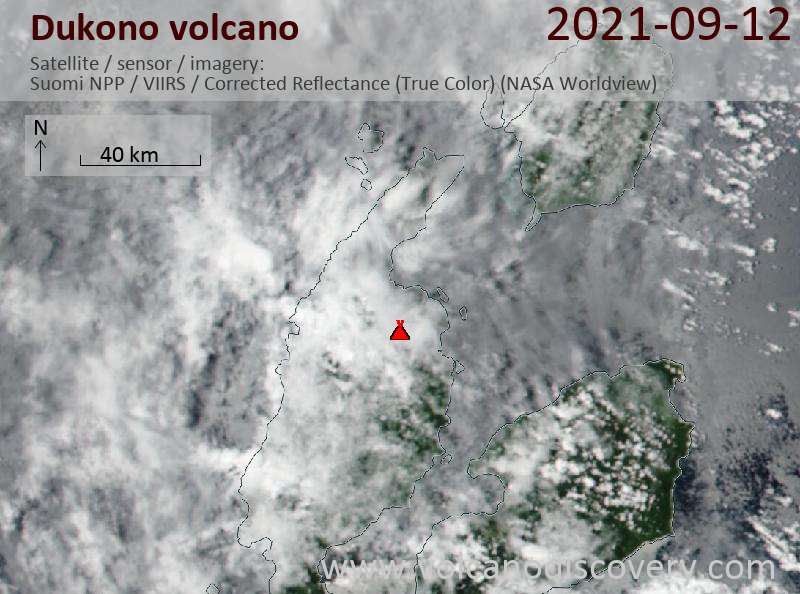 Map of currently active volcanoes
See which volcanoes are erupting at the moment! Probably more than you think...
Milos
27 Sep-2 Oct 2020

Island of Venus
Milos Island in Greece is one of the most beautiful and photogenic islands of the Mediterranean. Its boasts breathtaking scenery of colorful volcanic rocks, some of the finest beaches of the country, a rich archeological heritage, great hospitality and delicious local cuisine. Come join us to explore this magical island on a 6-days geological tour!
Vote for pictures

Image pool
View user-submitted images and vote for the Photo of the Month!
Daily volcano map

Active volcanoes map
Check which volcanoes are currently active (erupting). Our daily updated maps give a quick overview.
Why is there advertising on this site?
Support us - Help us upgrade our services!
We truly love working to bring you the latest volcano and earthquake data from around the world. Maintaining our website and our free apps does require, however, considerable time and resources.
We need financing to increase hard- and software capacity as well as support our editor team. We're aiming to achieve uninterrupted service wherever an earthquake or volcano eruption unfolds, and your donations can make it happen! Every donation will be highly appreciated. If you find the information useful and would like to support our team in integrating further features, write great content, and in upgrading our soft- and hardware, please make a donation (PayPal or Online credit card payment).