(Купол лавы 376 m / 1,234 ft)
Amorong volcano a small lava dome in NW Luzon Island, 80 km NNE of Pinatubo volcano, and belongs to the Eastern Volcanic Chain or Balungao Group, a chain of subduction volcanoes behind the Manila Trench.
It is the only of a group of several lava domes that still has fumarol... [БОЛЬШЕ]

(Стратовулкан 1565 m / 5,134 ft)
Bulusan, one of the most active volcanoes in the Philippines, is Luzon's southernmost volcano. It lies at the SE end of the Bicol volcanic arc occupying the peninsula of the same name that forms the elongated SE tip of Luzon island. [БОЛЬШЕ]

(ВУЛКАН 1133 m / 3,717 ft)
Cagua is an active stratovolcano at the NE tip of northern Luzon Island, Philippines. It has a circular summit crater of 1.5 km diameter, with steep, 60-m-high walls, and is locally known as the "Fire Mountain". The volcano might have erupted in 1907, when strong fumarole activit... [БОЛЬШЕ]

(ВУЛКАН 1196 m / 3,924 ft)
Mount Iriga volcano is a small stratovolcano immediately SW of Lake Buhi in southern Luzon, Philippines.
The volcano is dominantly andesitic in composition, but has several basaltic flank cones. It has a large crater breached to the SE, which formed during a massive flank f... [БОЛЬШЕ]

(ВУЛКАН 1966 m / 6,450 ft)
Isarog volcano is an andesitic stratovolcano of Naga city, in SE Luzon, Philippines. It is part of the Bicol volcanic chain, and could still be active although no historic eruptions are known. The volcano has active fumaroles, steam vents and hot springs. [БОЛЬШЕ]

(ВУЛКАН 1544 m / 5,066 ft)
Mount Labo volcano is located SW of the city of Daet at the northwestern end of the Bicol Volcanic Arc on Luzon Island, Philippines.
It is a forested, andesitic stratovolcano with a basal diameter of 24 km. Labo last erupted about 27,000 years ago, but still shows geotherm... [БОЛЬШЕ]

(Кальдера 743 m / 2,438 ft)
The elliptical, 10 x 20 km wide caldera of Laguna de Bay is located immediately SE of Manila city, Philippines. It is the largest lake on Luzon Island and its surface is only 1 m above sea level.
Jalajala is a fumarole field on the flank of Mount Sembrano on the shore of La... [БОЛЬШЕ]

(ВУЛКАН 1548 m / 5,079 ft)
Malinao volcano (also known as Buhi or Takit) is a forested stratovolcano north of Mayon volcano and 3 km west of Malinao town, in southern Luzon, Philippines.
The volcano contains a large summit crater breached to the east.
Malinao was active from about 500,000 to ... [БОЛЬШЕ]

(ВУЛКАН 1157 m / 3,796 ft)
Malindig volcano (also known as Marlanga), is an andesitic stratovolcano at the southern tip of Marinduque Island, west of the Bondoc Peninsula on Luzon Island, Philippines.
The summit has sharp peaks. No recent eruptions have occurred at the volcano. Hot springs are activ... [БОЛЬШЕ]

(ВУЛКАН 1388 m / 4,554 ft)
The small, but voluminous Mariveles stratovolcano is located at the southern end of the Bataan Peninsula, on the west side of Manila Bay, Luzon Island, Philippines.
Although there are no known eruptions in historic times, it is a still active stratovolcano of andesitic com... [БОЛЬШЕ] 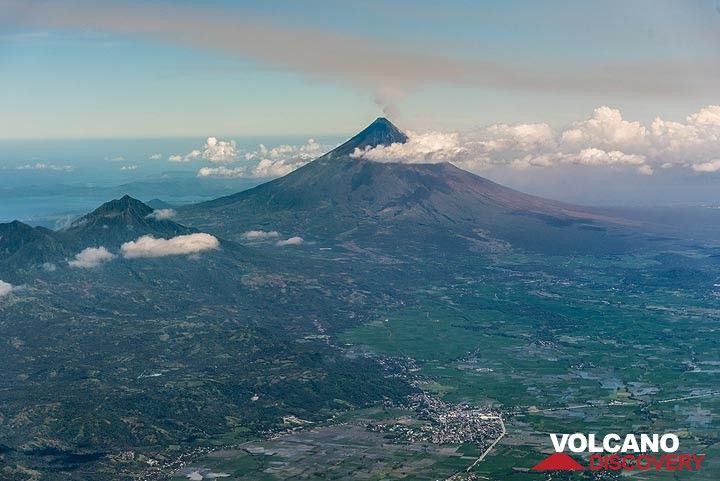 Masaraga volcano (left in the picture) with its taller and active neighbor, the Mayon stratovolcano seen during approach for Legazpi airport.
Masaraga is a stratovolcano with a pointed top located 10 km NW of Mayon volcano on Luzon Island in the Philippines.
The flanks of the andesitic-to-ryholitic volcano are covered by forested thick lava flows, indicating no recent eruptions, but it is thought that it has erup... [БОЛЬШЕ] 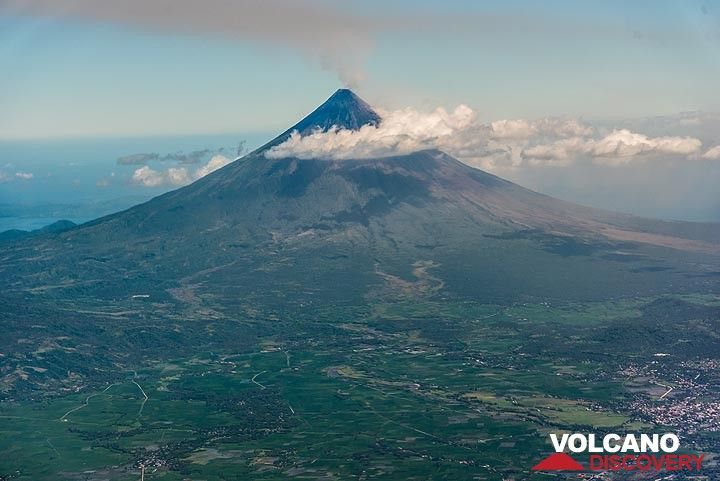 The majestic, perfectly symmetrical Mayon stratovolcano seen from the northwest during its eruption in 2018.
Mayon, the most famous of the active volcanoes of the Philippines, is a perfect stratovolcano rising to 2462 m on Luzon Island. It erupts very frequently. [БОЛЬШЕ]

(ВУЛКАН 1253 m / 4,111 ft)
Natib is a massive andesitic stratovolcano located at the northern end of the Bataan Peninsula, Luzon Island, Philippines.
It is truncated by a 6 x 7 km wide caldera. The age of its last activity is uncertain and the volcano might still be active. 5 thermal areas are presen... [БОЛЬШЕ]

(ВУЛКАН 501 m / 1,644 ft)
Mount Panay is small andesitic stratovolcano on the Calumpang Peninsula west of the Batangas Bay, south of Lake Taal, Luzon Island, Philippines.
Panay may be extinct with its last eruptions being more than 10,000 years ago, but it still has strong solfataric activity. [БОЛЬШЕ]

(ВУЛКАН 1865? m / 6,119 ft)
Mount Patoc is an andesitic stratovolcano in the Cordillera Central of north-central Luzon, Philippines. It has strong fumarolic activity. A small river and a village on the west side are named "Mainit", which means hot. [БОЛЬШЕ]

The June 12, 1991 eruption column from Mount Pinatubo taken from the east side of Clark Air Base. U.S. Geological Survey Photograph taken on June 12, 1991, 08:51 hours, by Dave Harlow.
Pinatubo volcano exploded spectacularly on 15 June 1991. The Pinatubo eruption on 15 June 1991 was the second largest volcanic eruption of the 20th century.
Pinatubo is a complex of lava domes located 100 km NW of Manila city, Luzon Island, Philippines.
Prior to the... [БОЛЬШЕ]

(составные вулкан 1102 m / 3,615 ft)
The volcanic Pocdol Mountains (also known as Bacon-Manito complex) are a group of volcanic cones between Saragon Bay and Albay Gulf in southern Luzon.
Some of the cones are probably only a few thousands of years old. A fumarole field and a geyser are found in the area, sug... [БОЛЬШЕ]

(ВУЛКАН 2260 m / 7,415 ft)
Santo Tomas volcano on Luzon Island, Philippines, is one of the highest stratovolcanoes of the country. It has many volcanic vents and fissures.
A report about an eruption or "displacement" in the region on January 4, 1641, described as an outburst of water accompanied by ... [БОЛЬШЕ] 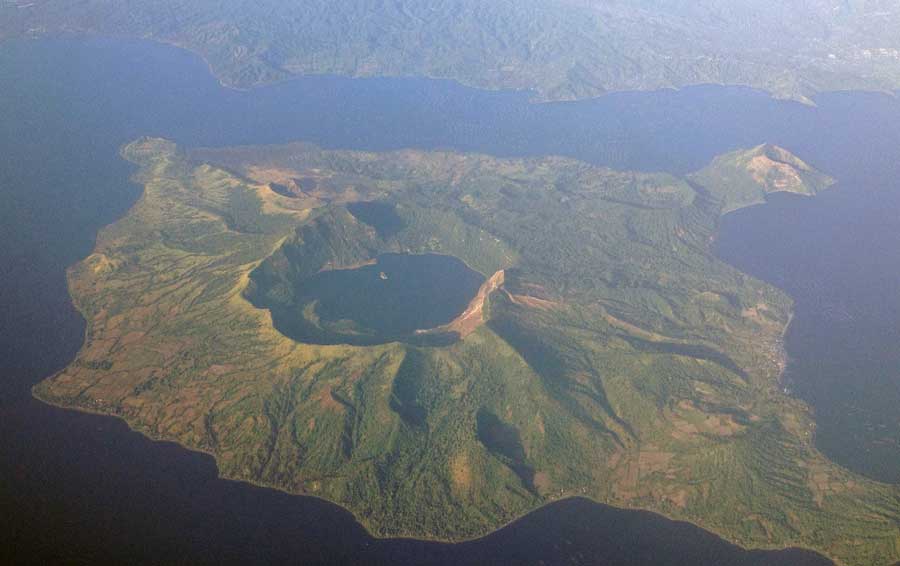 Aerial photo of Taal Volcano on December 22, 2012 (image: Mike Gonzalez, Wikimedia Commons, see text for link)
Taal volcano with its lake-filled 15x20 km wide Talisay (Taal) caldera is a beautiful caldera volcano, but also one of the most active and dangerous volcanoes of the Philippines. Taal has had some of the country's largest and deadliest eruptions: At least 6 eruptions during the r... [БОЛЬШЕ]
First visit to our site? If you havn't done it yet, download the Volcanoes & Earthquakes app to get one of the fastest volcano news online:
Android | IOS 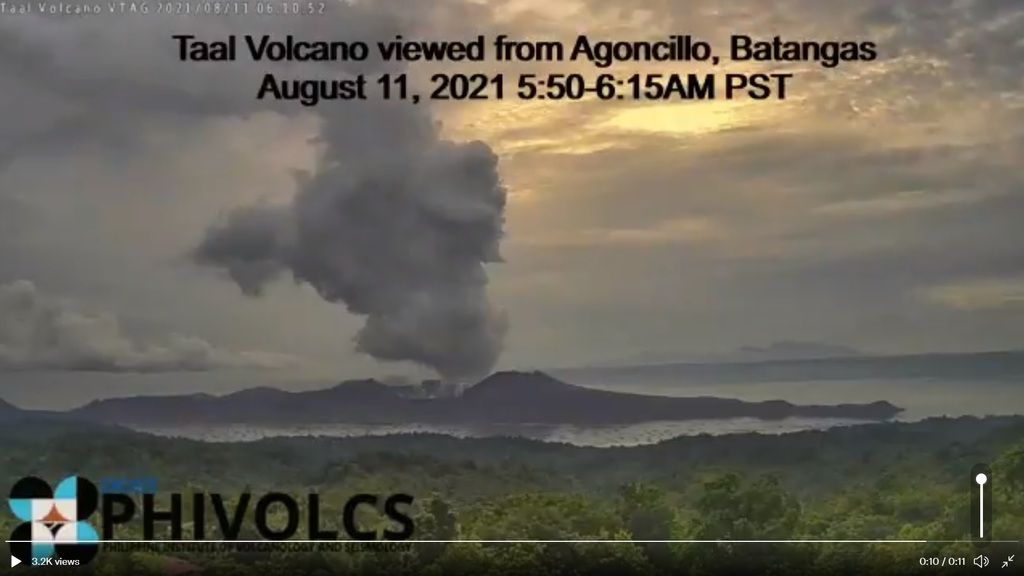 The volcano continues at the phase of intense activity over the past month. ... Read all
Попробуйте наше бесплатное приложение!

Volcano Calendar 2020
We're proud to present our 2020 volcano calendar: 13 different and attractive images of volcanoes, volcanic landscapes and phenomena taken during volcano tours over the past two years.
Our New Book

Volcano Discoveries
"One of the most eye-catching guides to the world's volcanoes ever published.
Support us
If you find the website useful and would like to support us and help keep it alive and improve it, please consider making a small donation. Thank you!
Daily volcano map