On 17 Oct, explosions were particularly violent at Anak Krakatau. We show a series of images of a spectacular explosion captured from close range by boat. 2 months later, the cone of Anak Krakatau collapsed into the sea on the evening of 22 Dec 2018, triggering a catastrophic tsunami (more info).
Continued activity that accumulated more and more weight on the cone, built on top of a steep underwater slope in the SW (left in the images), and shaking by explosions like this might well have been the final trigger for that tragic event.
|| Gallery Index 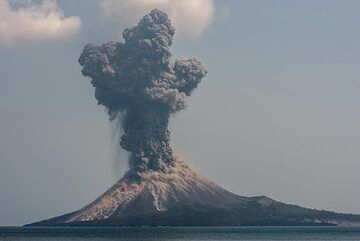 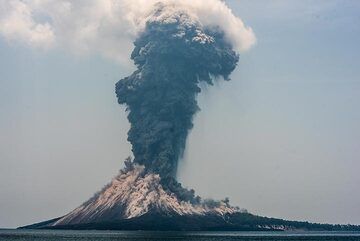 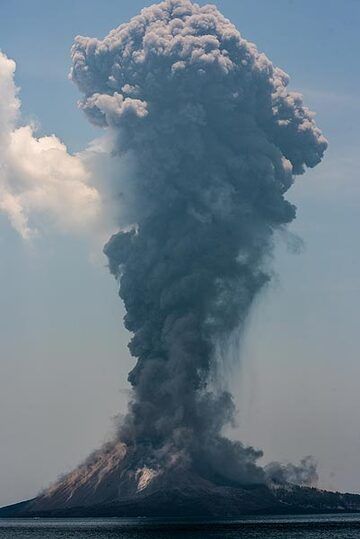 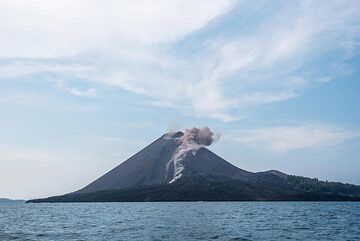 A larger rockfall occurs after a quiet period that had lasted several hours, announcing something wa... [info]
(1657 Просмотров) 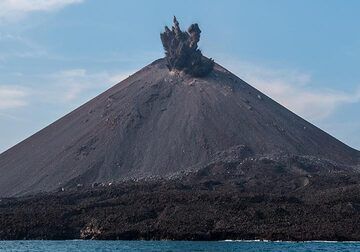 A laterally directed explosion starts from a location immediately beneath the southern rim at 16:12 ... [info]
(1576 Просмотров) 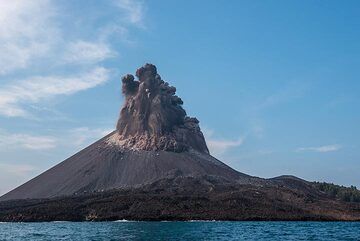 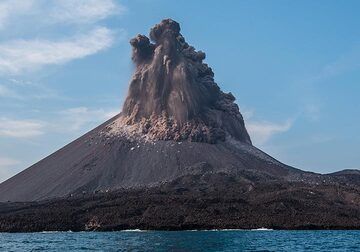 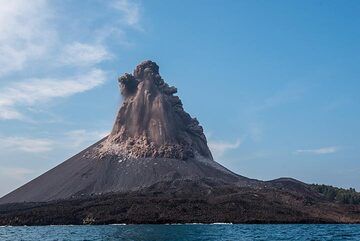 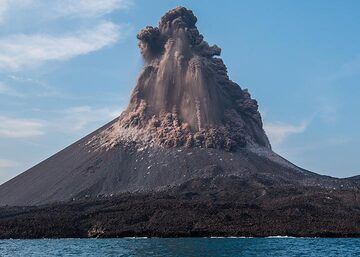 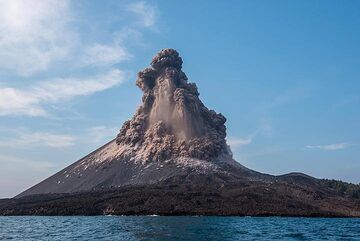 Bombs start to land on the slopes of the cone. (Photo: Tom Pfeiffer) [info]
(1062 Просмотров) 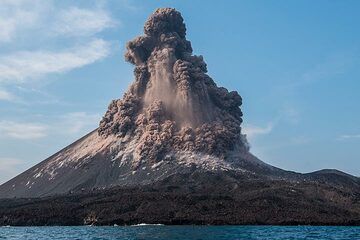 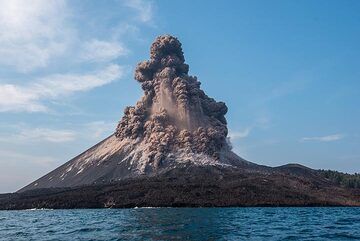 Soon, almost all of the cone's flanks is covered by impacts of falling bombs. (Photo: Tom Pfeiffer) [info]
(1319 Просмотров) 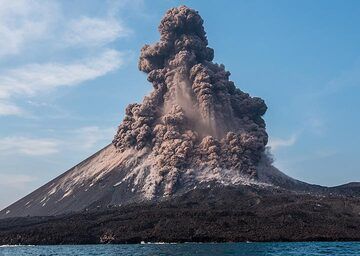 Very large blocks were ejected and roll down the slopes along with fingers of ash. (Photo: Tom Pfeif... [info]
(1639 Просмотров) 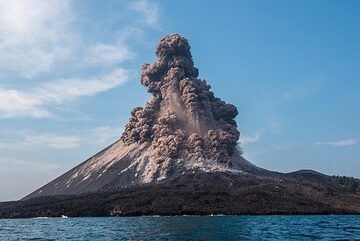 On 17 Oct, explosions were particularly violent at Anak Krakatau. We show a series of images of a sp... [info]
(1910 Просмотров) 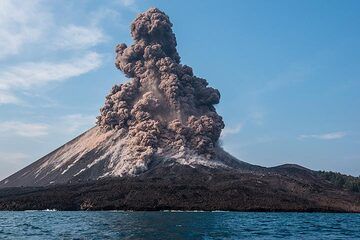 At this point, we start to realize that our position is not safe at all... (Photo: Tom Pfeiffer) [info]
(898 Просмотров) 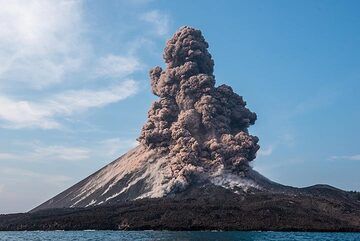 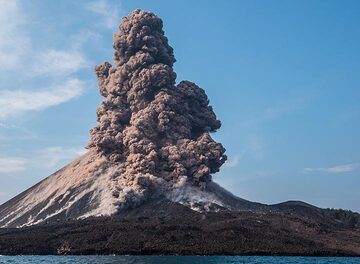 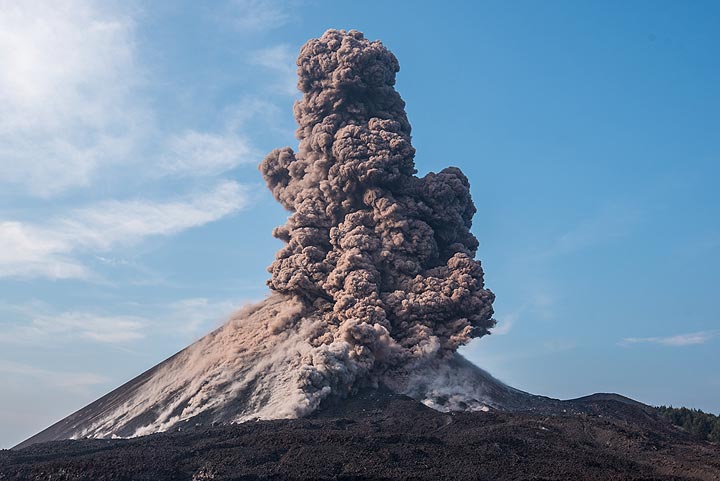 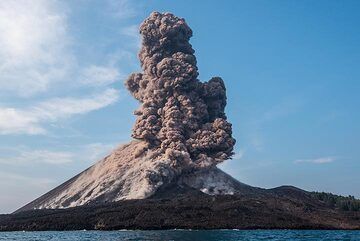 On 22 Dec 2018, continued eruptions of Anak Krakatau had accumulated too much weight on the cone, wh... [info]
(980 Просмотров) 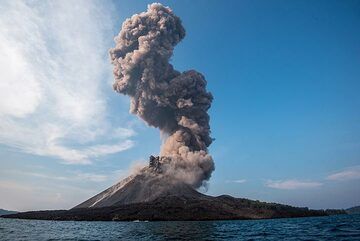 A second, weaker pulse of eruption follows while the ash plume from the explosion still rises furthe... [info]
(896 Просмотров) 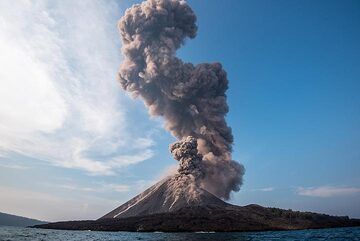 After having gained some distance with the boat, a very wide angle lens is needed to capture the ash... [info]
(913 Просмотров) 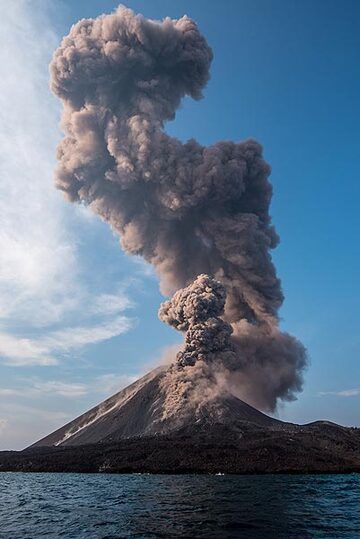 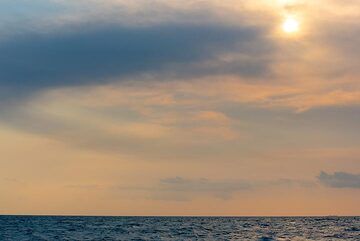 After half an hour, the ash plume from this eruption can still be seen drifting in the western sky. ... [info]
(892 Просмотров) 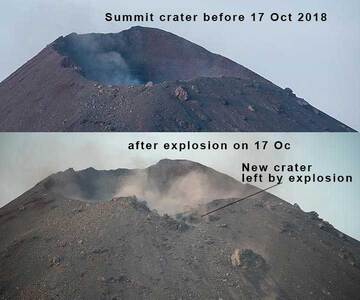 Comparison of the summit crater before the explosion and after - it has occurred from a point high o... [info]
(2141 Просмотров)
|| Gallery Index

Eruption from close
On 17 Oct, explosions were particularly violent at Anak Krakatau. We show a series of images of a spectacular explosion captured from close range by boat.
Видео вулканов

Excellent information for anyone wishing to visit and enjoy active volcanoes safely. Detailed guidelines to 42 different volcanoes around the world.
Fumaroles

Volcano Trip
Guatemala is a country with spectacular volcanic activity, wonderful landscapes, colorful villages and towns, friendly people.
Join a trip organized by an experienced Guatemalan guide and photographer Diego Rizzo together with VolcanoDiscovery to have a chance to watch the active volcanoes (Fuego and Pacaya) from up close! Get an in-depth experience of the powerful and turbulent natural processes at work and take stunning pictures!
Why is there advertising on this site?
Sources: VolcanoDiscovery / VolcanoAdventures and other sources as noted.
Use of material: Most text and images on our websites are owned by us. Re-use is generally not permitted without authorization. Contact us for licensing rights.
Volcanoes & Earthquakes