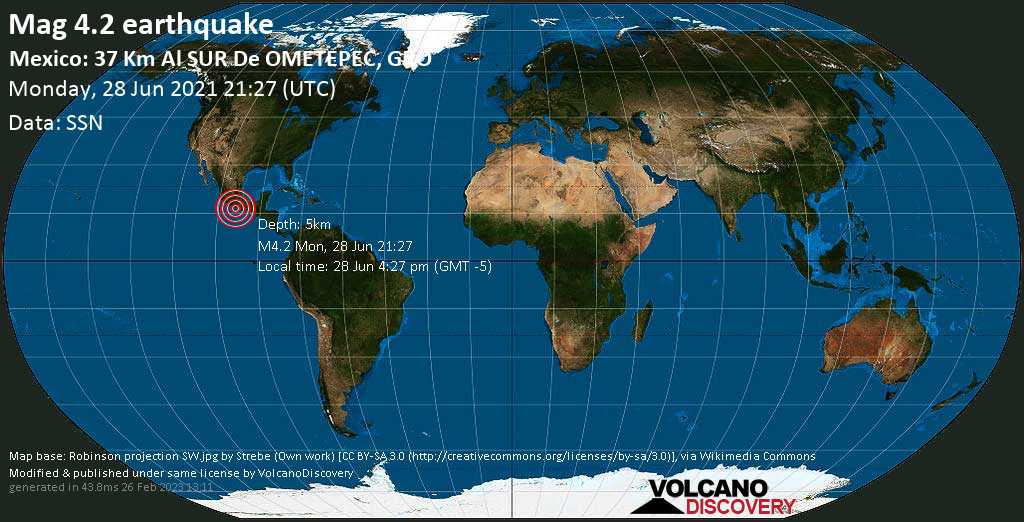 28 Jun 21:49 UTC: Первым сообщить: SSN через 21 минута.
Update Mon, 28 Jun 2021, 21:54
Moderate tremor of magnitude 4.2 just reported 41 km west of Pinotepa Nacional, Mexico
4.2 quake 28 Jun 4:27 pm (GMT -5)
Mexico's National Seismological Service (SSN) reported a magnitude 4.2 quake in Mexico near Pinotepa Nacional, Santiago Pinotepa Nacional, Oaxaca, only 26 minutes ago. The earthquake hit in the afternoon on Monday 28 June 2021 at 4:27 pm local time at a very shallow depth of 5 km. The exact magnitude, epicenter, and depth of the quake might be revised within the next few hours or minutes as seismologists review data and refine their calculations, or as other agencies issue their report.
A second report was later issued by the European-Mediterranean Seismological Centre (EMSC), which listed it as a magnitude 4.2 earthquake as well.
Based on the preliminary seismic data, the quake was probably felt by many people in the area of the epicenter. It should not have caused significant damage, other than objects falling from shelves, broken windows, etc.
In Santiago Tepextla (pop. 1,400) located 1 km from the epicenter, Santo Domingo Armenta (pop. 2,600) 7 km away, and San Nicolas (pop. 3,300) 11 km away, the quake should have been felt as light shaking.
Weak shaking might have been felt in Cuajinicuilapa (pop. 10,300) located 14 km from the epicenter, El Ciruelo (pop. 2,200) 20 km away, San Juan Bautista Lo de Soto (pop. 1,900) 21 km away, Ometepec (pop. 24,100) 38 km away, and Pinotepa Nacional (pop. 29,600) 41 km away.
Download the Volcanoes & Earthquakes app and get one of the fastest seismic alerts online:
Android | iOS