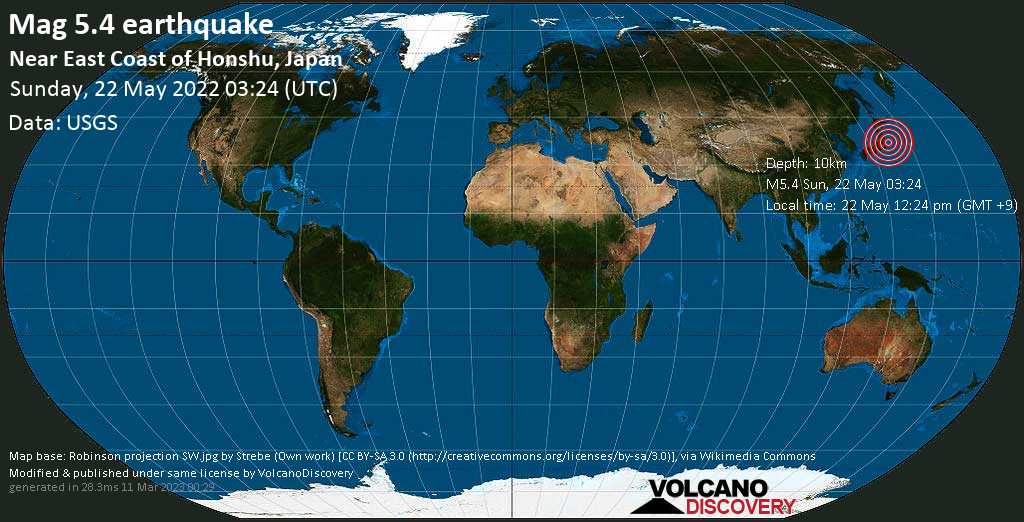 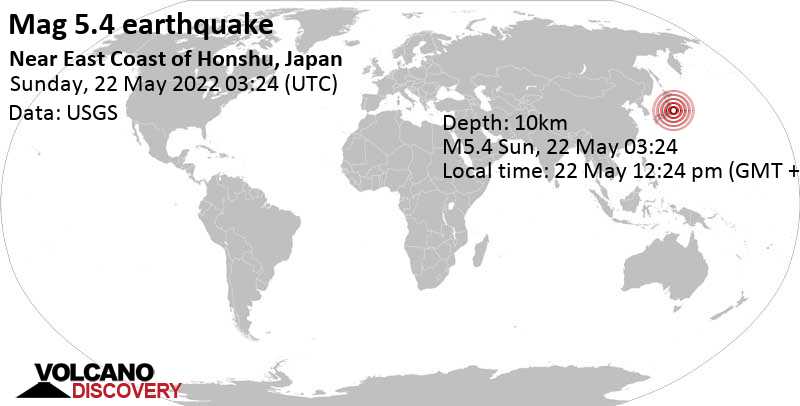 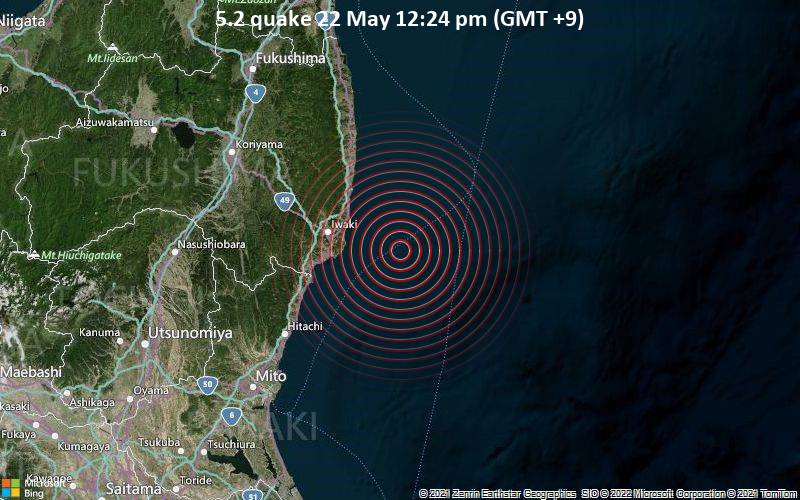 5.2 quake 22 May 12:24 pm (GMT +9)
A magnitude 5.2 earthquake near Iwaki, Iwaki-shi, Fukushima, Japan, was reported only 18 minutes ago by the German Research Centre for Geosciences (GFZ), considered one of the key international agencies that monitor seismic activity worldwide. The earthquake occurred at a shallow depth of 10 km beneath the epicenter around noon on Sunday, May 22nd, 2022, at 12:24 pm local time. The exact magnitude, epicenter, and depth of the quake might be revised within the next few hours or minutes as seismologists review data and refine their calculations, or as other agencies issue their report.
A second report was later issued by the citizen-seismograph network of RaspberryShake, which listed it as a magnitude 5.2 earthquake as well. Other agencies reporting the same quake include France's Réseau National de Surveillance Sismique (RéNaSS) at magnitude 5.6, the European-Mediterranean Seismological Centre (EMSC) at magnitude 5.5, and the European-Mediterranean Seismological Centre (EMSC) at magnitude 5.3.
Generally quakes of this magnitude are recorded by more than one agency and the results can vary, with subsequent reports that come in after the first one often showing more accuracy.
Based on the preliminary seismic data, the quake was probably felt by many people in the area of the epicenter. It should not have caused significant damage, other than objects falling from shelves, broken windows, etc.
In Iwaki (pop. 357,300) located 36 km from the epicenter, the quake should have been felt as light shaking.
Weak shaking might have been felt in Kitaibaraki (pop. 50,800) located 51 km from the epicenter, Takahagi (pop. 33,600) 58 km away, Hitachi (pop. 186,300) 70 km away, Sukagawa (pop. 68,800) 87 km away, Hitachi-Naka (pop. 156,800) 92 km away, Kōriyama (pop. 340,600) 93 km away, and Katsuta (pop. 156,000) 93 km away.
VolcanoDiscovery will automatically update magnitude and depth if these change and follow up if other significant news about the quake become available. If you're in the area, please send us your experience through our reporting mechanism, either online or via our mobile app. This will help us provide more first-hand updates to anyone around the globe who wants to know more about this quake.
Загрузите приложение «Вулканы и землетрясения» и получайте одно из самых быстрых сейсмических оповещений онлайн: Android | iOS
Я почувствовал это землетрясение
Я не почувствовал это землетрясение

[Подробнее]
Based on its magnitude, the fault that was active during the quake ruptured along a surface of approx. 25 km2 (=10 sqare miles) as a first-order estimate. The length of the rupture zone thus was probably around 9 km (5 mi).
Aftershocks typically occur during the days and weeks following the quake at or near the same fault, at distances of up to approx. two times the length of the rupture zone.
The often broadly linear arrangement of aftershock epicenters encompasses the rupture zone of the main shock (check on the map below to verify).