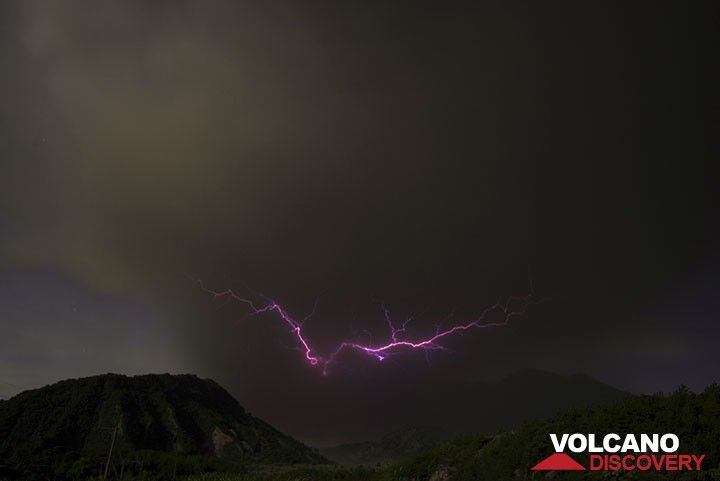 « Previous · Next »
Weak westerly winds drift the plume over the eastern sector, where the otherwise full-moon lit sky darkens completely for about two-three hours. About one hour (!) after the explosion is over, large lightning occurs in the ash plume. Smaller lightning still occurred up to two hours after the explosion. Ash rain forced me to retreat. (Photo: Tom Pfeiffer)
Thumbnails↑ · ↑↑Gallery Index
Copyright: Tom Pfeiffer / www.volcano-photo.com
Contact: Email
File: sakurajima_j00550.jpg | Hits
Try our free app!

Volcano Calendars
We have published several volcano calendars over the years: usually, we use photos taken by us or our participants during our recent volcano tours and expeditions. A perfect gift if you're a fan of volcanoes!
Travel news

Volcano Tours on Hawai'i
The Hawaiian Islands are not only home to the most active volcanoes in the world, Kilauea and Mauna Loa on the Big Island, but also boast a unique natural environment. Born by volcanic activity of a very active hot spot in the middle of the Pacific Plate, they are a showcase of natural history.
Plate Tectonics

Introduction to Plate Tectonics
The Earth's upper, rigid layer is broken into several plates which are in constant motion to one another. Most earthquakes and volcanoes occur as result of these plate boundaries.
Get the ad-free version!
Why is there advertising on this site?
Copyrights: VolcanoDiscovery and other sources as noted.
Use of material: Most texts and images, in particular photographs, on this website are protected by copyright. Further reproduction and use of without authorization is usually not consented. If you are not sure or need licensing rights for photographs, for example for publications and commercial use, please contact us.
Home | Travel | Destinations | Volcanoes | Photos | Earthquakes | About | Glossary | News | Contact | Privacy - change consent | Imprint | EN | DE | EL | ES | FR | IT | RU
Follow us: