The 1917 eruption of San Salvador volcano

The last eruption of San Salvador volcano began on 6 June 1917 following strong and destructive earthquakes lasting for 2 hours. The eruption consisted of an effusive fissure eruption on the NW flank followed by a moderately explosive summit eruption (similar, but smaller in scale, to the Eyafjallajökull eruption in 2010).
The effusive phase produced a large aa lava flow on the NW flank, left a row of cinder cones on the eruptive fissure, and lasted about a week. The second phase started simultaneously with the waning of the waning of the first phase from a fissure vent inside the summit crater. It quickly evaporated a former 400 m wide lake and built the small Boqueroncito cinder cone. 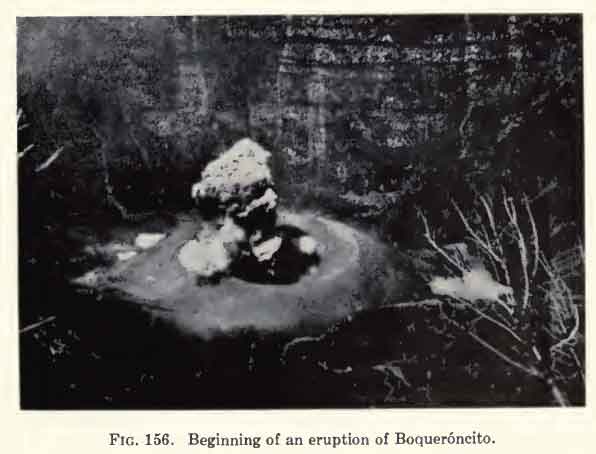 Eruption from Boqueroncito (from Kumar, 1957)

The last historic eruption of San Salvador volcano (Boqueron) began at around 20:00 local time on 6 June 1917 following a series of violent earthquakes 2 hours earlier. The earthquakes caused significant damage in nearby areas including El Salvador town.
A large NW-SE fissure opened on the upper northern flank at altitudes between 1350 and 1400 m and later propagated downslope. The 1917 fissure was parallel to an older radial eruptive fissure located to the west.
A voluminous lava flow started to emerge from there, "ejecting a huge current of lava together with dense clouds of gas and fumes. Little craters remaining on that side of the volcano are called craterlets (boqueroncitos)." The main lava flow, of aa-type lava, quickly advanced and cut the Quezaltepeque-Ciudad Arce railroad line. This flow stopped on 11 June, when it had covered 16 sq km and erupted a volume of about 10 million cu meters.

The eruption continued from vents at the lower part of the eruptive fracture at elevations between 650 and 580 m with violent strombolian activity and lava flows. "Besides pouring out lava in profusion, it manifested the Strombolian type of eruption, exploding frequently with deafening reports like claps of thunder. J. Larde
named it El Tornador ("the Thunderer"). Strong but highly localized earthquakes also accompanied the eruptions of this craterlet."
A second stage of the eruption occurred shortly after and simultaneously from a summit vent: The former crater lake inside Boqueron's crater began to boil on 10 June when a new fissure opened beneath the lake. "At intervals, steam clouds rose at both ends of the lake, during which the lake level was seen to undulate."
By 28 June, the lake had evaporated and a fissure was observed on the crater floor that erupted mud and lava. Intermittent lava fountains quickly built up a new cinder cone, called the Boqueroncito cone, which reached 40 m height in 8 days by 5 July. "One explosion followed another at intervals of 5 or 10 minutes and columns of incandescent lava and gases shot high into the air, almost to the rim of the main crater. Out of this spectacular display there emerged at the center of the old crater a perfectly shaped cone (Boqueroncito) of vesicular lava and ashes with a funnel-shaped crater (about 35 meters deep)".
Eruptions from the Boqueroncito vent continued until November when it waned and the eruption ended. "In spite of the fact that the eruptions from the newly formed volcano continued until November of the same year, including heavy ash eruptions during July, August, and September, the height of the cone remained practically unchanged."
40 years after the eruption, there was only a single fumarole at the northwest wall of the main crater, feebly emitting steam and sulphurous gas.
Source:
Kumar, R. S. (1957) "A restudy of the 1917 eruption of Volcán Boquerón, El Salvador, Central America", Fieldiana - Geology, v. 10 (30), Fieldiana, Geology, v. 10 (30), pp. 363-382

Watch volcanoes live and catch an eruption in action!
Volcanoes in Africa

List and map of all volcanoes in Africa. Most volcanoes are located in the Great Rift Valley, but there are more.
Support us
If you find the website useful and would like to support us and help keep it alive and improve it, please consider making a small donation. Thank you!
Get the ad-free version!
Why is there advertising on this site?