Unclear reports from Athanasius Kircher (1665) and Buondelmonte (1465/66) indicate that either a part of Palea Kameni collapsed and disappeared or a new island between Palea Kameni and Thera was built.

No reports of activity are known from that period. There was either actually no eruption or it has not been recorded.

197 BC eruption: appearance of Palea Kameni

The most recent plinian eruption on Santorini occurred in the late Bronze Age at around 1613 BC and is known as the so-called Minoan eruption. It is one the biggest known volcanic explosions in younger time,- and one of the most studied, but still most mysterious eruptions of all time-. It devastated not only Santorini, but had a deep impact on the whole of the Eastern Mediterranean. Perhaps it even had serious world-wide effects and changed history.
Size of the Minoan eruption
Dating of the Minoan eruption
Still today, one can see its deposits, the characteristic, tens of meters thick layer of white pumice and ash that blankets most of the surface of the island group. The eruption changed the shape of the island itself dramatically: it is now believed that before the eruption, it had the shape of an almost complete ring that enclosed an earlier, shallower caldera.
Large sections of island collapsed into the emptied magma chamber after the eruption, literally disappearing under the sea. The ring-island was breached to the W and NW, and the caldera was significantly widened and deepened.
The Minoan eruption devastated the rich, highly developed economic center, that Santorini was at that time. Since 1969, intense archaeological excavations have brought to light an important Cycladic/Minoan town which had been buried beneath the volcanic ash for almost 4000 years. Although it appears that people had time to evacuate their island in time before the eruption, carrying most of their goods with them, the findings from Akrotiri are impressive: especially, they include well-preserved and magnificent wall paintings, ceramics and other objects. Thanks to the work of numerous archaeologists, a new light was thrown on an important prehistoric period and culture. The spectacular discovery even induced continuing speculations that relate the volcanic destruction of Santorini to the legend of the sunken Atlantis.

First visit to our site? If you havn't done it yet, download the Volcanoes & Earthquakes app to get one of the fastest volcano news online:
Android | IOS
Latest news
Thu, 12 Aug 2021, 06:40
Santorini volcano (Greece): frescoes from the Bronze-Age town at Akrotiri

One of the most remarkable aspects of the Bronze-Age town near Akrotiri on Santorini Island, covered by volcanic ash during the Minoan eruption around 1600 BC and partially excavated since 1956, are a great number of marvelous frescoes that might rank among the most inspiring pieces of art from the 2nd millennium BC, but also provide a unique insight into life and culture at the heyday of the Minoan and Cycladic culture. ... Read all
Tue, 20 Apr 2021, 18:13
Moderate earthquake near undersea volcano beside Santorini, Greece. Should we worry? 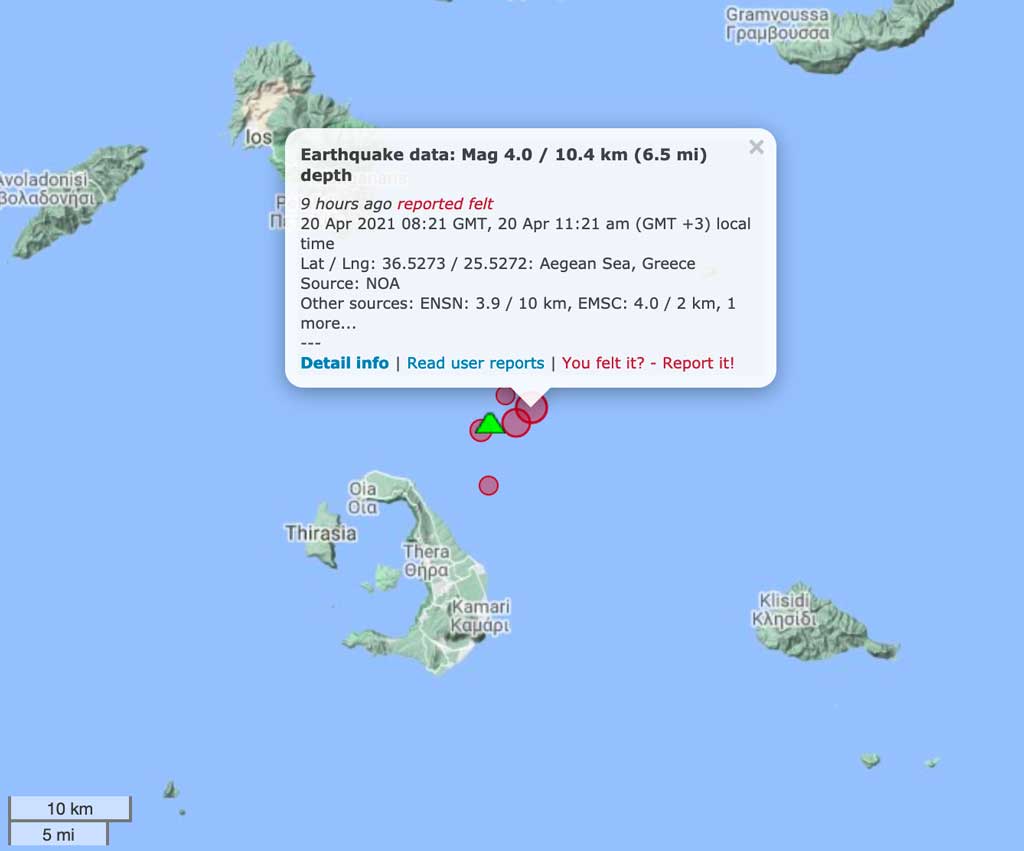 This morning, a magnitude 4.0 earthquake occurred 10 km northeast of Santorini Island. The quake hit at 11.21 am local time. It was felt by many people on Santorini, especially in the northern part of the island in the town of Oia, mostly as weak shaking that lasted a few seconds. ... Read all 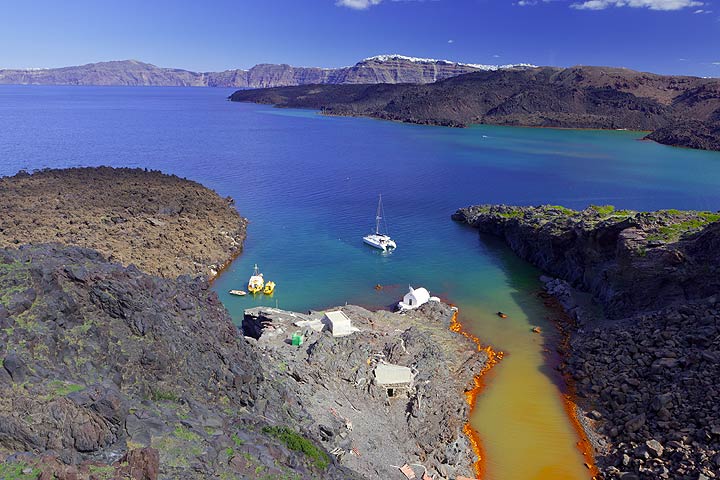 Green Volcanoes
The Azores are famous for their very pleasant climate, breathtaking green and unspoiled landscapes and nature. Guided by a photographer and volcanologist, discover five islands: Sao Miguel, Faial, Terceira, Pico and Flores - each with its distinct character.
Strombolian explosions

Divergent plate boundaries on continents
Learn about the process of breaking up continents along continental rift zones.
Volcano World

Find out about active volcanoes worldwide
Get the ad-free version!
Why is there advertising on this site?
Support us - Help us upgrade our services!
We truly love working to bring you the latest volcano and earthquake data from around the world. Maintaining our website and our free apps does require, however, considerable time and resources.
We need financing to increase hard- and software capacity as well as support our editor team. We're aiming to achieve uninterrupted service wherever an earthquake or volcano eruption unfolds, and your donations can make it happen! Every donation will be highly appreciated. If you find the information useful and would like to support our team in integrating further features, write great content, and in upgrading our soft- and hardware, please make a donation (PayPal or Online credit card payment).