Santorini volcano - when will the next eruption occur? 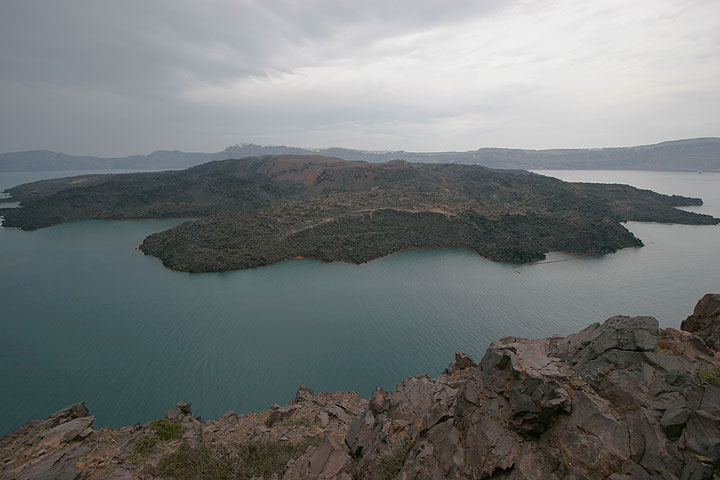 Nea Kameni island, the site of the last eruptions, with its lava flows in the caldera of Santorini volcano, seen on a cloudy day from Palea Kameni
Problably not very soon. At the moment (end of Jan 2012), there are some (still minor) signs that the volcano of Santorini could wake up in a medium future (months to years). Predicting IF and if yes, WHEN exactly there will be a new eruption is impossible - volcanoes are and will always be unpredictable.
It is quite certain, though, that the volcano will erupt in the future again, because it is an active volcano and far from extinct.

Based on the frequency of the past eruptions, a statistical prediction can be attempted: during historic time, Santorini has erupted in 197 BC, 46/47 AD, 726, 1570-1573, 1707-1711, 1866-1870, 1925-1928, 1939-1941, and last in 1950.
Looking at these dates, there have been 9 eruptions over 2000 years, and perhaps a few that are not preserved in geologic or historic records. One arrives at an average eruption interval of about 200 years for this period. On the other hand, the intervals between eruptions are all but regularly spaced: for instance, about 700 years seem to have passed between the eruption in Roman times (46 AD) and the probably very large eruption in 726, of which little is known except that it was said to have blanketed the Aegean Sea with pumice.
Another long interval of about 700 years followed until Mikri Kameni was born in 1570, which was a rather small dome-building eruption.
After 1570, eruptions followed with smaller intervals, notable the series of activity in 1866-70, 1925-28, 1939-41 and 1950. Since then, a significantly larger time interval has passed until now (62 years).
A major limiting factor is the number of data points to make a reliable statistic out of this: only 4 eruptions and 4 time intervals are available if we only look at the last 150 years, and any purely statistical approach on such a few number of samples is nearly useless. If we only had this statistical approach, the long-term prediction would be limited to say that it will erupt in the future, which could be just a day away or thousands of years.
As one of our commentors volcanologist J. Stone from the University of Bristol (who are involved in monitoring Santorini at the moment) kindly pointed out, predicting volcanic eruption is not limited to the WHEN, but also the important questions of HOW and WHERE, which hazards may occur etc. This has been a major task of modern volcanology and in the recent decade, much study has been devoted to this subject, and many more sophisticated approaches are available (e.g. Baxter et al, 2008) which use Bayesian statistics, expert judgement and event trees to model possible eruptions. In this way, volcanologists can communicate the uncertainty, but also provide something useful for planners and decision makers.
Volcanologist may not necessarily be able to predict the "when" with much temporal resolution, but they are able to forecast probabily of eruption scenarios with some success, in other words, how likely eruptions are within a given timeframe. Crucially, science is now able to predict relatively accurately where eruptions and hazards may occur with high spatial resolution.
To make an example for Santorini: over the past several hundreds of thousands of years, there have been at least 12 Plinian eruptions, spaced at intervals of an average 20-30,000 years, some of which were followed by caldera collapse, and interupted phases of effusive and smaller eruptions that built new shields (such as Nea Kameni), and contributed to filling the caldera. It is reasonable to believe that Santorini is now in a shield-building phase on the long term, following the last plinian eruption, the famous Minoan eruption 3600 years ago. Statistically, it is very unlikely that the next eruption will be of such magnitude, if it occurs in a timeframe of years to few centuries from now. It is supported by the argument that the volcano is believed to have long rest periods (thousands of years) preceeding such eruptions.
The worst-type scenario for an intra-caldera eruption that could be imagined with any substantial likelihood could then be the type of the little-known explosive eruption in 726AD, which was possibly sub-plinian. Such an explosion would be severly damagine the island and its infrastructure, threaten people and probably require a large-scale evacuation. Fortunately, this scenario is not the the most likely type of the next eruption at all.
Looking at the past, the most likely scenario to consider is something similar to the recent eruptions since the 18th century, probably a dome-building eruption with weak to moderate intermittent explosive activity from new vents on or very near Nea Kameni in the center of the caldera.
In order to refine this prediction and applie it to a current situation (such as now), we need short-term forecast and monitoring.

Modern monitoring techniques monitor changes in the volcanic system, such as fast and slow ground movements (earthquakes and deformation), temperatures of gasses and other fluids, their chemical composition, to mention the most important parameters. It is known both from observation and theory that such parameters often change in systematic ways before an eruption (but not always), and can therefore be used to predict eruptions on a short-term basis (days to years).
The more intense such changes (e.g. seismic activity in combination with inflation and temperature rise) are, the more likely an eruption.
Surprisingly, Santorini volcano, although one of the most-studied volcanoes, is far from being one of the best-monitored volcanoes when compared to volcanoes that erupt more frequently, such as Etna, Stromboli, Vesuvius etc.

Monitoring usually depends on local presence and is normally the task of the local scientific community of the country involved, also due to the delicate nature of the task to keep the balance between over-alarming, under-estimating risk and neutral informing.
Here in Greece, science (and education in general) is greatly underfunded and underdeveloped, which is ultimately a political decision. A second factor is the general public attitude, (inlcluding the BIG tourist industry on Santorini) to assume that Santorini is a dormant volcano that will NOT erupt and cause problems in any foreseable future.

Now, in early 2012, rumors are starting to take off that "the volcano is ready to blow". There are signs of unrest, no doubt, and there has been a small inflation under the volcano and a rise in temperature in springs and fumaroles, although probably not at alarming levels. Suddenly, people learn that Santorini is an active volcano. The older generation, who has witnessed the last eruptions has mostly passed away and left little knowledge and experience in the local population. It is time to prepare, nothing else.

Outlook for the next eruption

Pyle and Elliot (2006, s. below) studied the characteristics of the past 4 (and well-documented) eruptions of Nea Kameni (1866-70, 1925-28, 1939-41, 1950). The eruptions were mainly effusive, with intermittent weak to moderate explosive activity and produced similar dacitic blocky lava domes and flows. Based on several factors (magma composition, eruption style etc.), they seem to have been fed by the same and still existing magma chamber.
It is a fair assumption that the next eruption, should it occur in a not-too-distant future (few years to decades) from now, will be in the line of these events.
Pyle and Elliot write that "all of the historic intracaldera eruptions for which there are at least adequate records (those since the eighteenth century) have shared a number of important common features: prepre-eruptive uplift of parts of the submarine Kameni edifice, and the eruption of magma from at least 2 eruptive vents. All have also involved the early formation of lava domes, which later act as a focus for vigorous, intermittent explosive activity, as well as acting as the vent from which lavas emerge."
"There is no reason to suspect that a future eruption would not be preceded by the same general phenomena - including general uplift of the edifice, and discoloration of the sea - and so, given the current monitoring of the caldera, it is highly likely that the next eruption will be anticipated some days to weeks in advance."

In their study, they find that the assumption of a constant time-averaged supply from magma from the deep mantle source is in good agreement with observed effusion rates (on the order of 0.5-2.5 m3 per second) during eruptions, the length of each eruption and the time intervals between each of them.
They conclude that "should an eruption occur during 2006, it will last for more than 2.7 years and produce a dome ~115–125 m high".
If that prediction is translated for the year 2012 or 2013, the length of the predicted (expected) next eruption should last almost 3 years.
(The formula used is simly a best-fitting match of the observed length of eruptions as function of the elapsed time interval, and expressed as:
duration (in days) = 7.4 * number of elapsed years since last eruption + 578 days.)

Vanuatu Volcano Tours
One of the most exciting volcano travel destinations in the world! On our adventurous expeditions, you will get close to active lava lakes on Ambrym Island and the spectacular fireworks of Yasur volcano on Tanna Island.
Volcano Photos

See volcano pics from our trips
Krakatau to Bali

Volcano and photo tour to Java, Indonesia
Visit Java's famous volcanoes: Krakatau, Merapi, Bromo, Semeru, Ijen and others, crossing Java from west to east. This study and photography trip for a small exclusive group is one of our classic and best tours.
Nyamuragira

Nyamuragira volcano photos
Africa's version of Mauna Loa, Nyamuragira (or Nyamulagira) is a massive basaltic shield volcano neighboring Nyiragongo. It is one of the most active volcanoes in the world and has voluminous eruptions every few years.
Krakatau