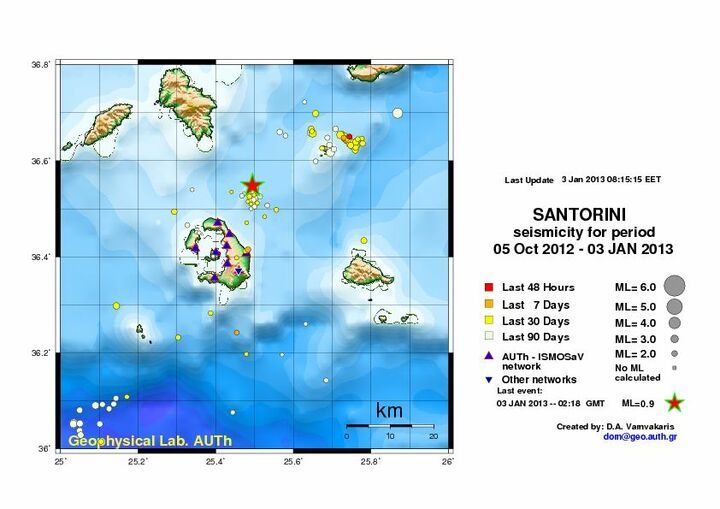 Map of recent earthquakes around Santorini during the past 3 months (Univ. Thessaloniki)
Earthquake activity at and near Santorini has calmed down again after the brief pulse in quakes mostly along the Amorgos Graben to the NE at the end of December. 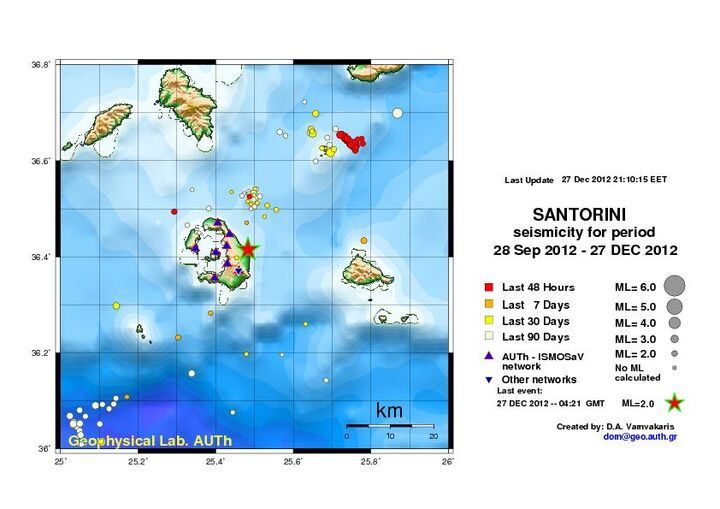 Location of recent quakes (Univ. Thessaloniki)
A probably tectonic-in-origin swarm of earthquakes has started yesterday half way between Kolumbo volcano and Amorgos island NE of Santorini. During 26 Dec, about 11 quakes of magnitudes around 2 at depths between 10-25 km occurred in this area. A few more weak quakes have occurred near Santorini itself.
Update Wed 26 Dec 11:20 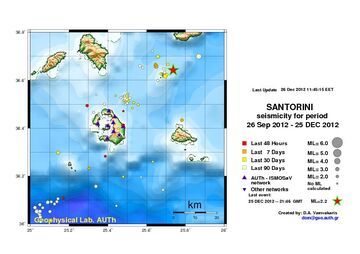 Crrenent seismic signal from Nea Kameni showing a few small local qakes
Some earthquakes in slightly elevated numbers have reappeared at Santorini. For now, this might mean nothing much unusual, but it is a volcano we closely watch for obvious reasons.

A not entirely serious update on volcanic tremor on Nea Kameni 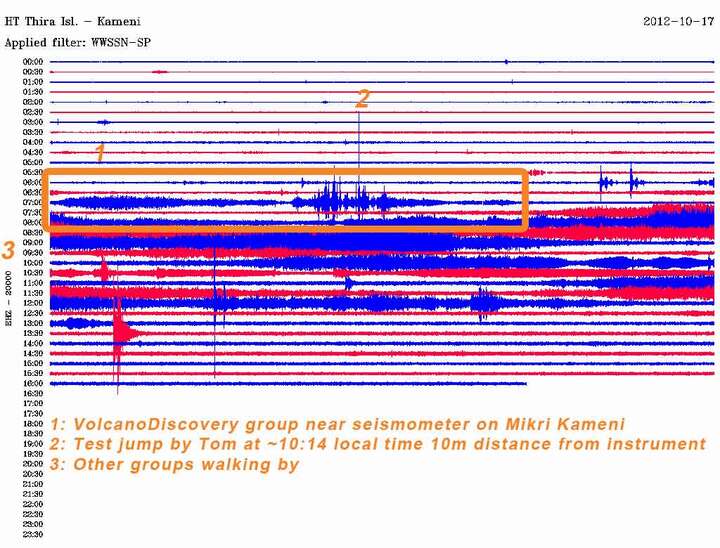 Seismic signals of Nea Kameni station on 17 Oct 2012
When our current group of the Fascination Volcano tour visited Nea Kameni today, we decided to test the seismometer. Here are the results - tremor and volcanic earthquakes triggered by tourists! 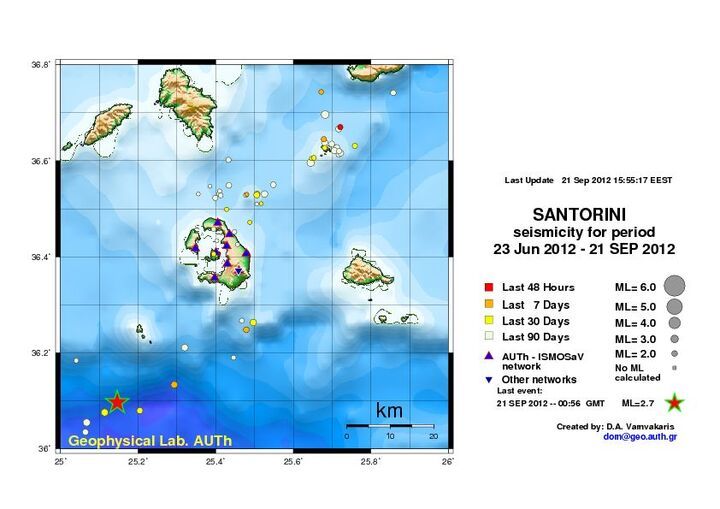 Time and depth of recent quakes
In recent days, many posts have sprung up again speculating about increased seismic activity at Santorini.
We cannot see any such. The live seismic recordings show normal noise, day-time activities and weather signals as well as spikes from quakes throughout the region all the time but most likely has not much to do with the volcano.
No unusual concentration of earthquakes has occurred near the island in the past weeks. 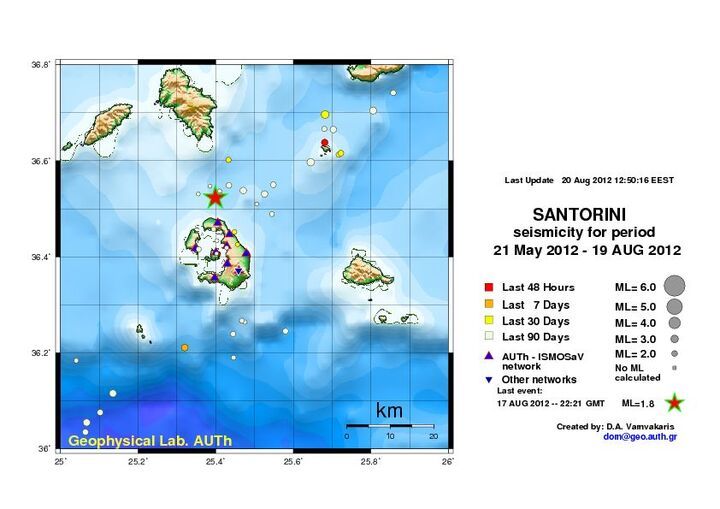 Earthquakes around Santorini during the past 3 months (Univ. Thessaloniki)
Overall, seismic activity has been decreasing a lot on Santorini - compare the recent plot of quakes around Santorini with one from 2011 or early 2012.
What caused the inflation and quakes during 2011-early 2012 has stopped doing so at least for now. Most likely, that was magma rising from depth into shallow reservoirs beneath Nea Kameni (called an intrusion), and has now "settled" and is slowly cooling without making it to the surface, i.e. erupt.

Signal from station HT-THR3 (Nea Kameni, Univ. Thessaloniki)
This is what a (small) magnitude 2.7 earthquake in 25 km distance at 20 km depth looks like on the seismograms of Santorini and gives an idea about how sensitive they are.
You can see the quake at 16:07 in today's earthquake list.

HT3 Nea Kameni station (Univ. Thessaloniki) current
Looking at recent seismic plots, one might get the impression that volcanic tremor is visible, but this cannot be judged without spectral analysis, and could simply be noise due to night-day rythms or malfunctioning of the instruments.
This fits the observation that the apparent increase of seismic activity usually is visible after about 7am local time (see images). This is true for most stations except perhaps the one on Nea Kameni which usually reflects noise induced by visitors on the island during the day, but had some strong signals outside this normal time during the past days. This could very well be malfunctioning, but we cannot know, unfortunately.
At the moment, there is no official statement about whether anything out of the usual is going on under Santorini seismically. No particularly increase number of earthquakes have been published.
Even if there was, one might doubt that authorities would say anything that could sound alarming about the volcano right now, around the peak of the summer, i.e. 15 August... 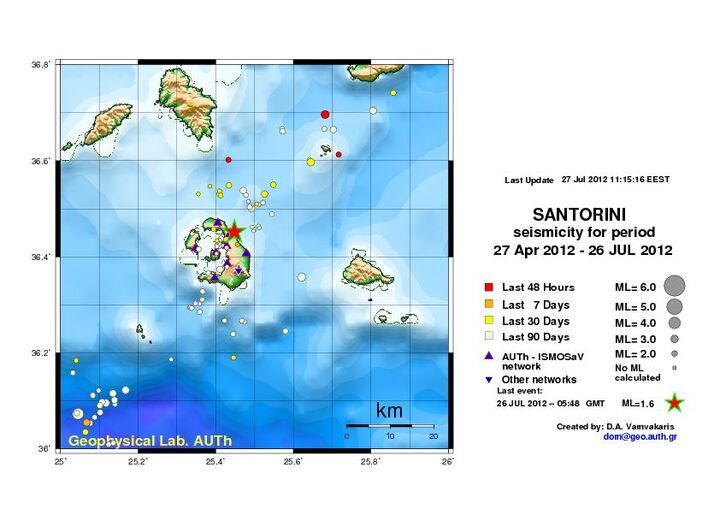 Map of earthquakes around Santorini (
The number of quakes has slightly picked up at Santorini. 4 earthquakes have occurred on 27 July to the NE of Santorini, near the submarine Kolumbo volcano. The quakes are small, but their number is higher than normally (but this probably does not mean much).
Update Fri 22 Jun 11:40
No significant seismic activity has been recorded at Santorini recently. It seems that the probable magmatic intrusion that started deformation and seismic unrest since 2011 is coming to an end.
Update Wed 23 May 19:17
No significant seismic activity has taken place at Santorini over the past days. 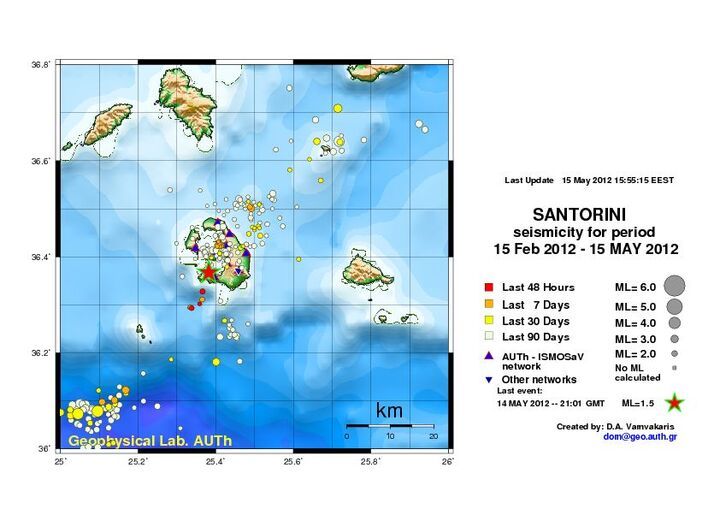 Earthquakes at Santorini 15 Feb - 15 May 2012
Another small swarm of quakes seems to be occurring at Santorini, this time concentrated in the SW area of the island.

Earthquake swarm on the Kolumbus line 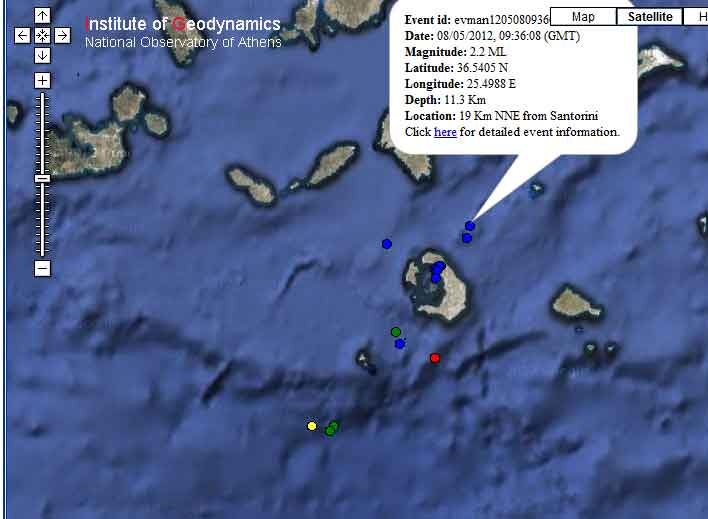 Earthquakes at Santorini 8-9 May 2012 (Natl. Observatory Athens)
Another seismic swarm has been occurring at Santorini volcano in the past days, located on the SW-NE line running through the caldera and the Kolumbos submarine volcano (referred to as the Kolumbos line), and to the SW of the island along the same lineament. The largest quake was a 2.2 magnitude at 11.3 km depth at Kolumbos volcano on 8 May. 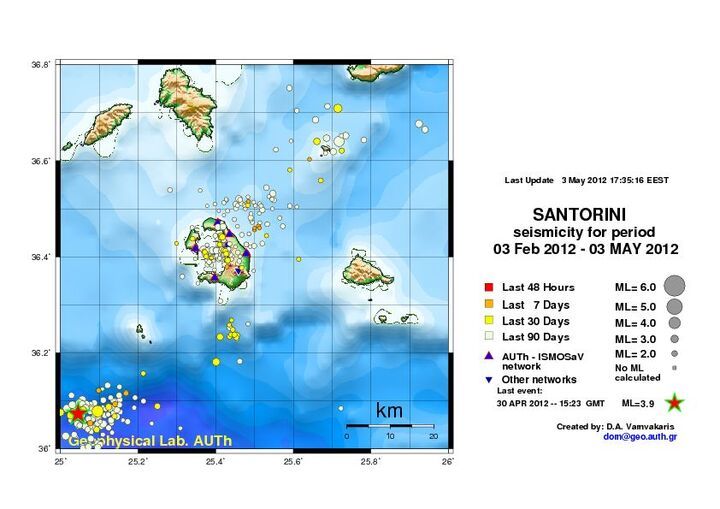 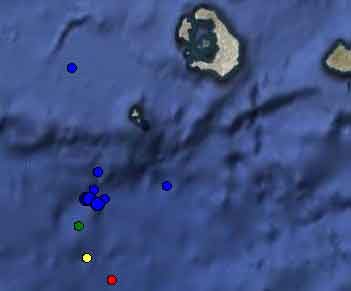 Earthquake swarm between 28 and 30 April southwest of Santorini (Inst. of Geodynamics)
During the past weeks, Santorini has been relatively calm. A few earthquakes occurred mainly SW and NE of the island recently, showing that unrest continues.
Notably another small seismic swarm occurred in the area of the early January swarm at a tectonic fault line located 50 km SW of the island between 28 and 30 April. The quakes were at depths around 5-15 km and included 3 quakes around magnitude 3, the largest quake being a 3.7 magnitude at 10 km depth on 30 April. 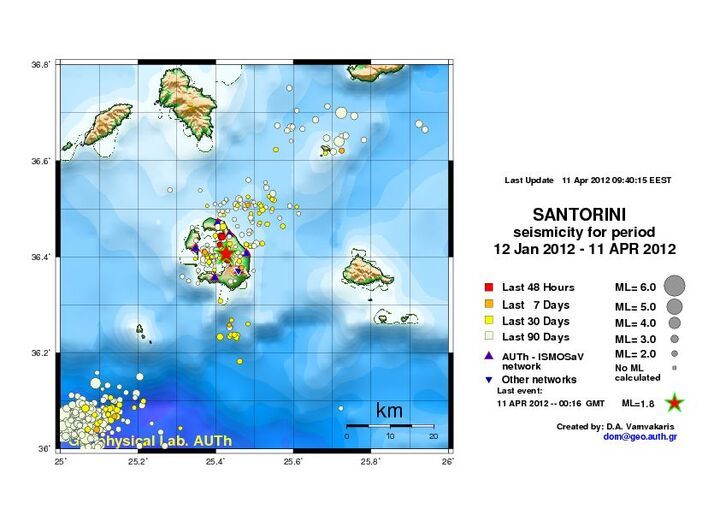 Seismic swarm at Santorini
A small earthquake swarm has been occurring at the western margin of the caldera during the past few days. The swarm consists of about 10 quakes of 1-2 magnitude at 7-8 km depth.
Update Thu 05 Apr 13:18
We have just visited Nea Kameni volcano. There are no visible changes. An infrared thermal camera has been installed to monitor Georgios crater. 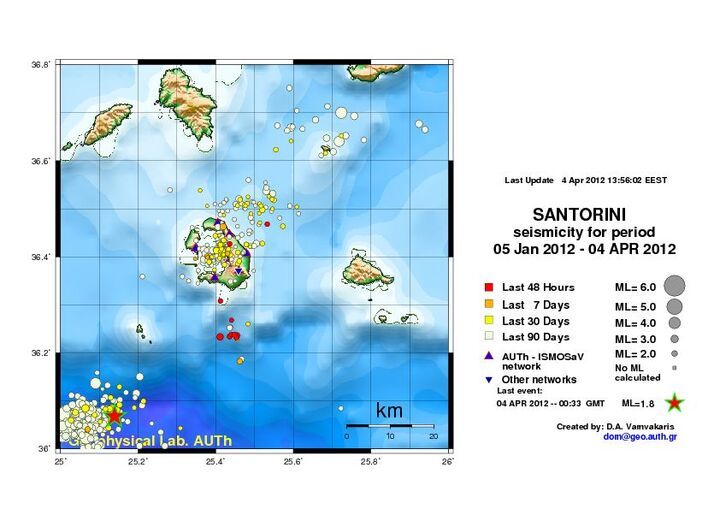 Earthquake activity at and near Santorini between 5 Jan and 4 April 2012
During the past days, a new earthquake swarm has been occurring near Santorini. This time, it is in an unusual location about 15 km south of the island, not on the principal volcano-tectonic SW-NE line crossing the caldera. The swarm consists of about 10 quakes at depths around 12-22 km with the largest event being a 3.0 quake at 22 km depth early yesterday.

Part 2 (Jan-March 2012)
Part 1 (2011)
First visit to our site? If you havn't done it yet, download the Volcanoes & Earthquakes app to get one of the fastest volcano news online:
Android | IOS
During 2011 and the first months of 2012, the number of earthquakes detected at Santorini has been slightly above background levels. The quakes were concentrated in the volcanically and tectonic active SW-NE zone passing through the caldera and the submarine volcano Kolumbus to the NE. An inflation of Nea Kameni has been detected, suggesting that a magmatic intrusion took place. As of June 2012, the volcanic unrest has calmed down, but we will follow the developments closely and post updates on this page.
Read also: Santorini volcano - when will the next eruption occur?
Live seismic data & webcam
Try our free app!

Volcano Special Tours
We organize tours to particularly active volcanoes and during ongoing eruptions for extended observation time from various viewpoints. These trips, exclusively for very small groups, are often announced only at short notice and require fast travel and flexibility. Each trip is accompanied by a volcanologist from our team. Examples include: Kilauea (Hawai'i), Colima (Mexico), Krakatau and many others.
Kamchatka volcanoes