Eruptive history of the Santorini volcano 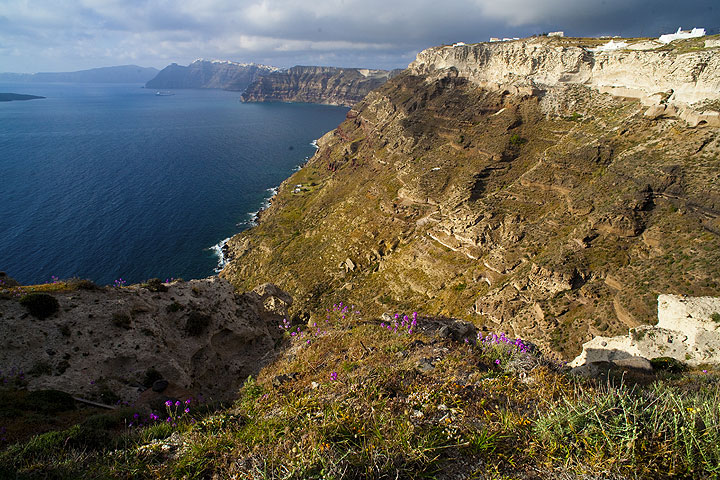 The caldera cliffs of Santorini revealing layer upon layer from different volcanic eruptions that built up most of the island edifice over the past 500,000 years.
The island of Santorini is the result of a complex history of volcanic eruptions over about 2 million years, during which the island has changed its shape and size repeatedly. Before any volcanic activity took place (caused by the subduction of the African plate under the Eurasian one), there was a small island in the area, similar to the other Islands of the Cyclades. This non-volcanic island forms the Profitis Ilias and Mesa Vouno mountains, as well as the shists at Athinios harbour and in the Plaka bay connected to Profitis Ilias mountain through the ridge of Pirgos, the Gavrilos ridge (the "windmill hill" south of Emborio) and the islolated rick of Monolithos.
Volcanism in the area of Santorini started about 2 million years ago when the first eruptions occurred from the sea floor in the area of the Akrotiri Peninsula and probably also at the location of the Christiania Islands 20 km SW of Santorini.
The activity built dacitic lava domes that eventually formed a series of islands, still visible in the hills of the Akrotiri peninsula. In a second stage, a stratovolcano (Peristeria volcano) was formed in the northern part of Santorini, parts of which are still visible in the cliffs and slopes of Mikro Profitis Ilias and Megalo Vouno.
Starting about 400,000 years ago, the focus of volcanic activity shifted to where it has been since then, the center of the present-day caldera. The most characteristic type of activity over the last 400.000 years has been the cyclic construction of shield volcanoes interrupted by large explosive and destructive events like the Minoan eruption about 3600 years ago.
In detail, the volcanic evolution of Santorini can be divided into six main stages (Druitt and others, 1989):

Eruptions of Santorini since the Bronze Age:

Private tours on Etna volcano
Discover Europe's largest active volcano on private, guided 1-day tours. Tours can be customized for different interests and fitness levels.
Get the ad-free version!
Why is there advertising on this site?
Support us - Help us upgrade our services!
We truly love working to bring you the latest volcano and earthquake data from around the world. Maintaining our website and our free apps does require, however, considerable time and resources.
We need financing to increase hard- and software capacity as well as support our editor team. We're aiming to achieve uninterrupted service wherever an earthquake or volcano eruption unfolds, and your donations can make it happen! Every donation will be highly appreciated. If you find the information useful and would like to support our team in integrating further features, write great content, and in upgrading our soft- and hardware, please make a donation (PayPal or Online credit card payment).