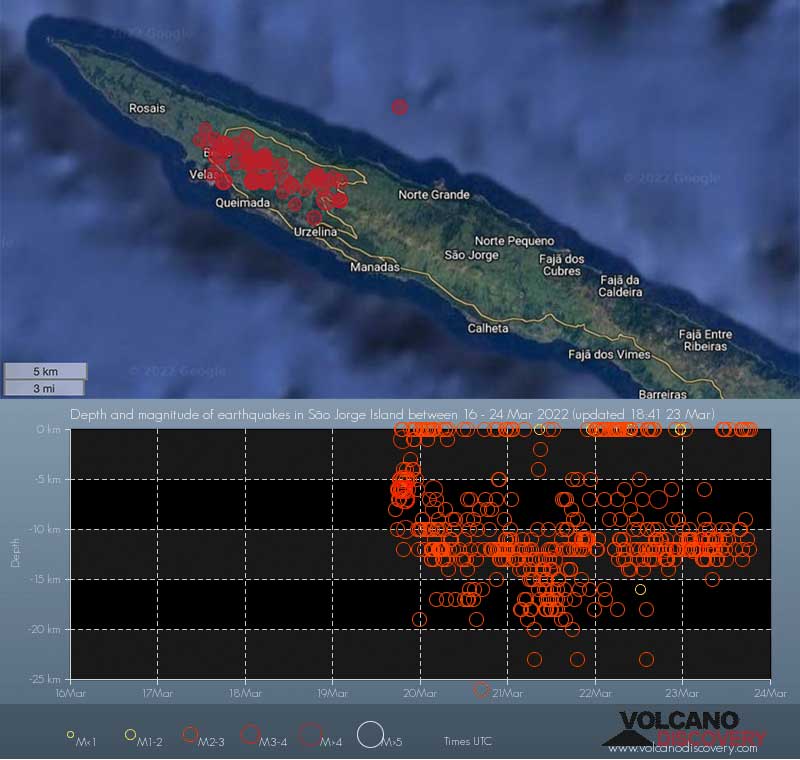 Quakes under Sao Jorge Island in the past 24 hours as well as distribution of depths over time
The seismic swarm under the northern part of the island continues, but at somewhat lower intensity today.
In total, about 100 quakes above magnitude 2.0 occurred in the past 24 hours, the largest a felt quake of magnitude 3.3 at 6.53 a.m. local time this morning. If to include tiny quakes below magnitude 2.0, the number is approx. 10 times higher.
The locations of the quakes under the island remain concentrated in an elongated area underneath the central northern rift zone in a layer between 10-15 km depth. There is no clear trend in strength and occurrence visible, except that quakes seem to become slightly less frequent over the past 12-24 hours.
While there is no official update from the volcano observatory of the Azores as to any other indications of possible volcanic origin, such as ground deformation, degassing activity etc, it can only be guessed at the moment that these earthquakes could reflect magma intruding into an elongated, approx. 15 km long area at around 10-15 km depth underneath the central ridge of the island, which would corresponds to the lower boundary of the oceanic crust with the uppermost mantle.
If indeed magma intrusion is causing the quakes, the quakes observed are the expression of rock fracturing at depth as magma moves into and forms new sheet-like structures known as dikes.
While volcanic eruptions on ocean islands such as the Azores or the Canaries are almost always preceded by such earthquake swarms, most such earthquake swarms are actually not followed by an eruption as magma often remains stalled at depth; over several years, such swarms then might re-occur as the volcanic system gradually becomes more active, until the intruded magma at depth is "ready" to actually breach the surface and produce an eruption.
Whether the current seismic swarm will end with a new volcanic eruption cannot therefore be said; chances that it will NOT are probably much bigger for the moment than that it will, at least at this point. With the absence of other data, all of this however is to some extent speculation.

Latest quakes in or near São Jorge Island, Azores 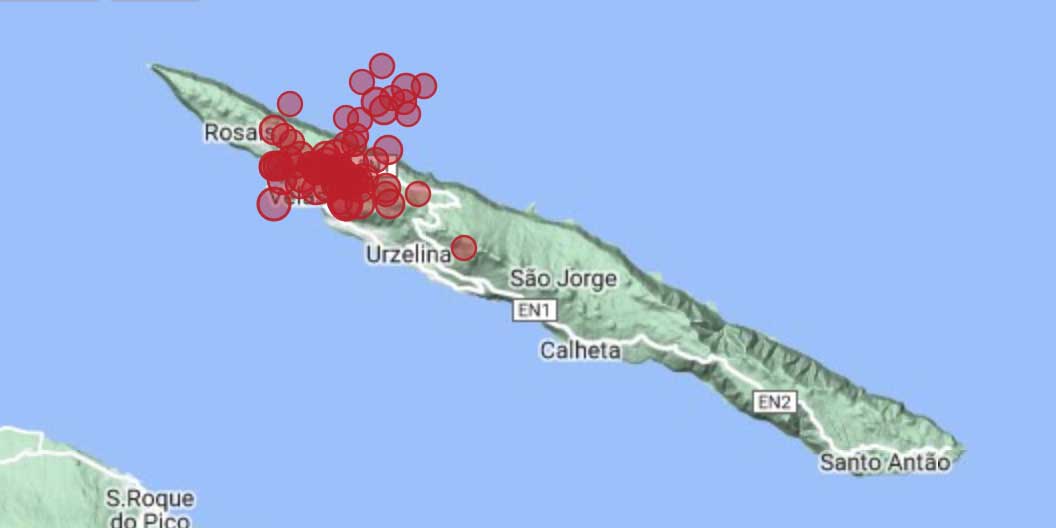 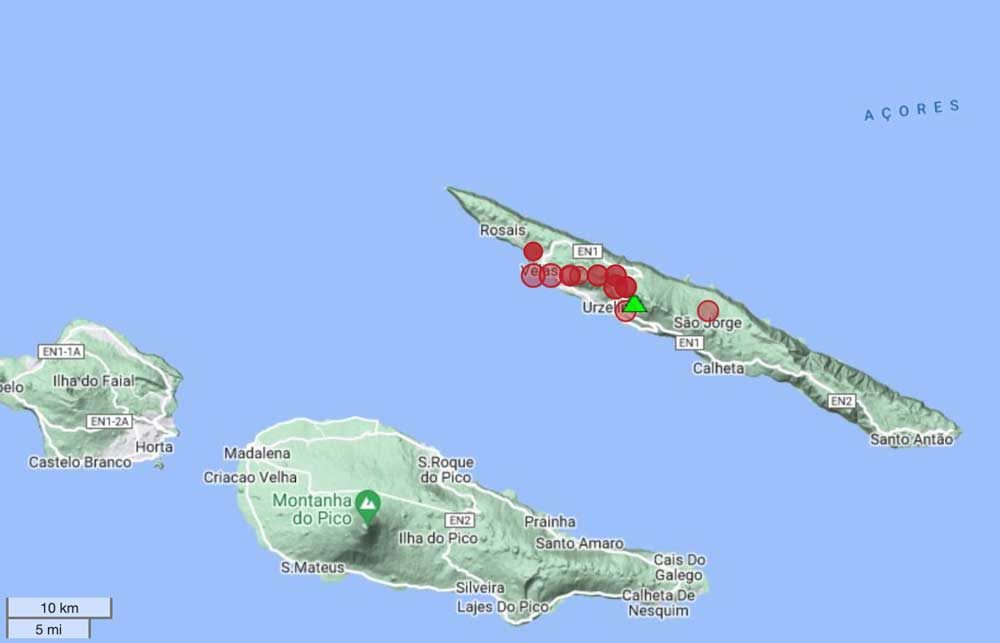 A swarm of earthquakes has started yesterday under the northwestern half of São Jorge Island (Azores), with 19 quakes of magnitudes between 2.0-3.5 and many more smaller ones. ... Read all
First visit to our site? If you havn't done it yet, download the Volcanoes & Earthquakes app to get one of the fastest volcano news online:
Android | IOS
São Jorge volcano
fissure vents 1053 m
Azores Islands, Portugal, 38.66°N / -28.11°W
Current status: restless (2 out of 5)
São Jorge webcams / live data | News | Updates | Earthquakes | Books
São Jorge volcano eruptions:
1580, 1808
Typical eruption style
Effusive
Latest nearby quakes
Latest satellite images
Try our free app!

Igneous or magmatic rocks
The most primitive rock type forms when magma (molten rock) solidifies - either inside the earth (plutonic rocks) or during volcanic eruptions (volcanic rocks). A short overview.
Satellite images

Recent volcano satellite images
Browse quickly through the latest satellite imagery from volcanoes all over the world in order to spot ash clouds and hot spots.
Hawai'i

Volcano Tours on Hawai'i
The Hawaiian Islands are not only home to the most active volcanoes in the world, Kilauea and Mauna Loa on the Big Island, but also boast a unique natural environment. Born by volcanic activity of a very active hot spot in the middle of the Pacific Plate, they are a showcase of natural history.
Molucca
3-19 May 2020

Volcanoes & Spices
This 17-days adventurous expedition is one of our most exciting volcano tours! Visit Halmahera, North Sulawesi and the Sangihe Islands with some of Indonesia's most active volcanoes, including Dukono, Ibu, Lokon, Soputan and Karangetang.
Etna volcano