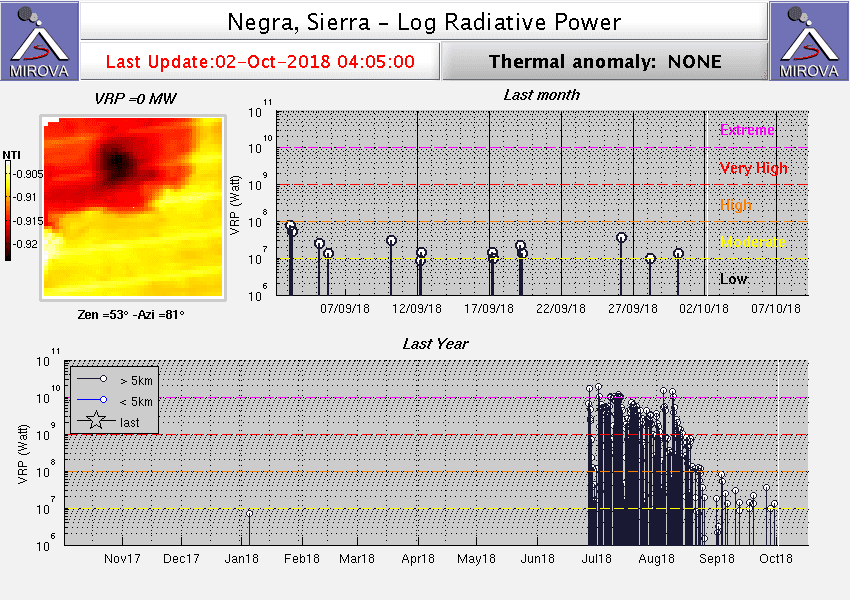 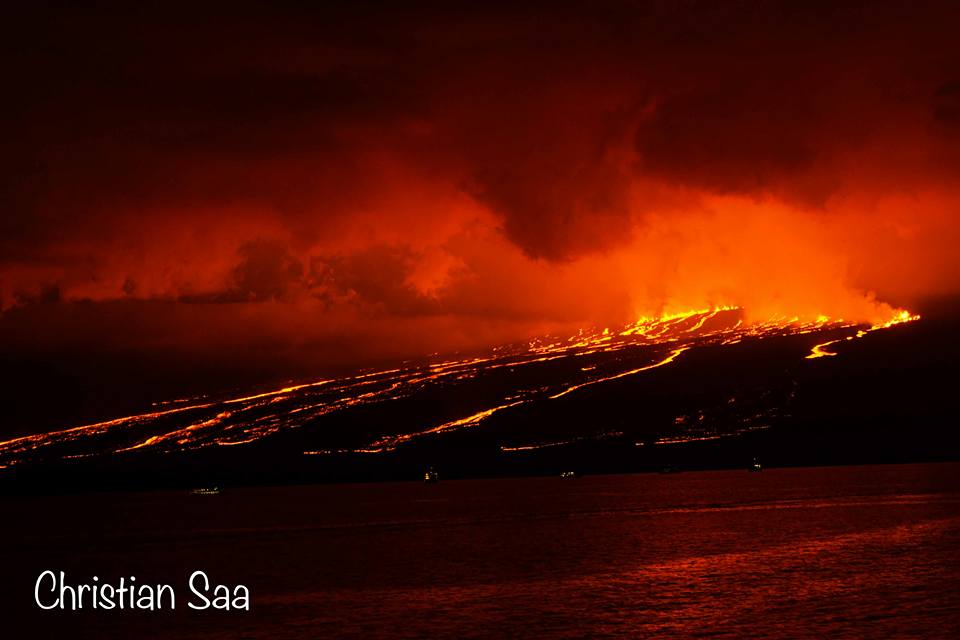 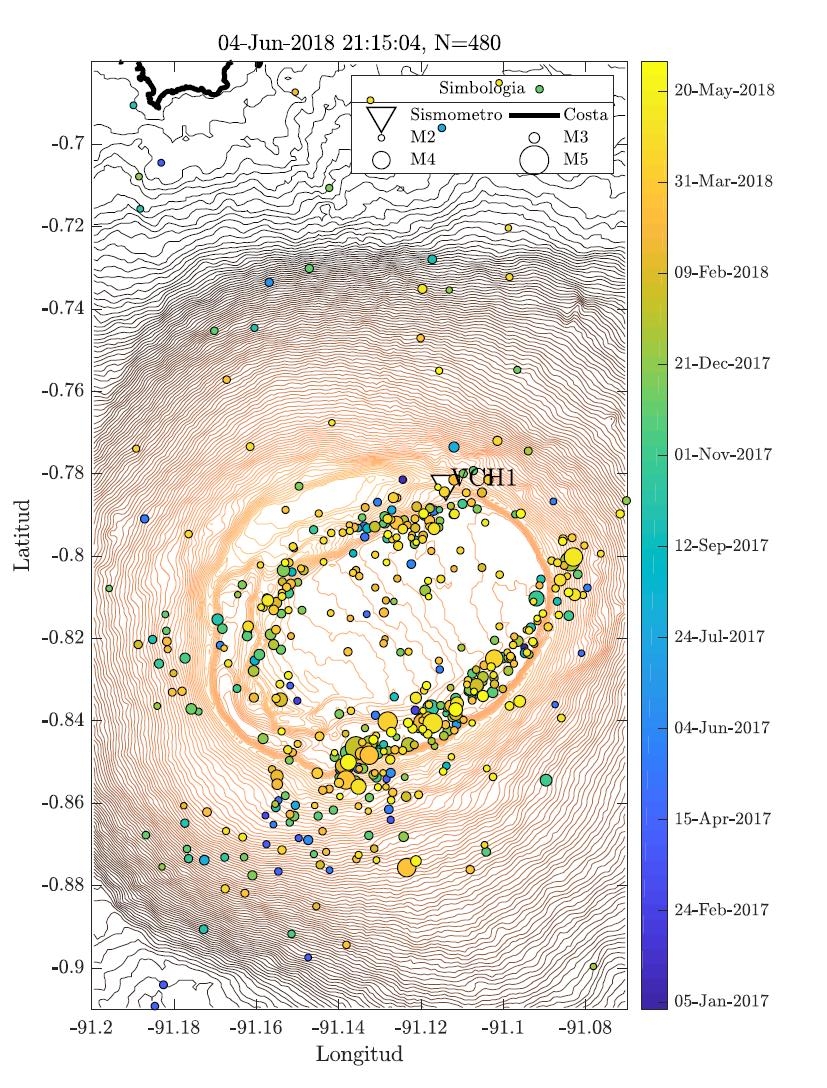 Earthquake locations under Sierra Negra volcano since Jan 2017 (image: IG)
A seismic crisis has started under the volcano recently, suggesting that the volcano could be approaching a new eruption in the near or medium-term future (weeks to months). Read all
to top
Sierra Negra volcano (Isla Isabela, Ecuador) - Smithsonian / USGS Weekly Volcanic Activity Report for 6 June-12 June 2018 (New Activity / Unrest)
Wed, 6 Jun 2018, 06:00
On 8 June IG reported a continuing high level of seismicity at Sierra Negra, characterized by a larger number and magnitude of earthquakes, indicating magma movement. The number of events per day had been significantly increasing since mid-2016. In the previous 10 days there was an average of 42 local events/day; on 25 May there were 104 events, the largest number of earthquakes per day recorded since 2015. Read all
Sierra Negre volcano, Galapagos: end of eruption
Mon, 14 Nov 2005, 14:42

Lava stopped flowing at Sierra Negre volcano on the evening of 30th of Oct. 2005.
However, even 10 days after the end of the eruption, fires caused by the eruption continued, threatening some rare plants on the island. About 500 hectars in the National Park were burning on the W flank of the volcano in an area called Pampas de Velasco. This area is home to the largest population  in the islands of the rare endemic plant Scalesia cordata, which was threatened by the fires. Therefore, the local authorities decided to intervene and take costly measures to extinguish the bushfire.

The eruption of Sierra Negre continues with lava flows confined to the vast caldera; it does not pose risks to populated areas. In the meanwhile, a group of scientists from the Geophysical Institute of Ecuador have visited the site and posted a detailed report about the eruption's first 3 days: it can be downloaded here.

Sierra Negra volcano (Isla Isabela, Ecuador) - Smithsonian / USGS Weekly Volcanic Activity Report for 26 October-1 November 2005 (New Activity / Unrest)
Wed, 26 Oct 2005, 06:00
According to IG, an eruption began at Sierra Negra on the S end of Isabela Island on 22 October at 1730 when an explosion was heard by many people in the town of Villamil, 20 km SE of the volcano. The eruption was preceded by a seismic event on 22 October at 1438, and by earthquakes on 19 October and 2 weeks earlier. The Washington VAAC recorded an ash cloud on satellite imagery at 1745 at a height of ~15.2 km (50,000 ft) a.s.l. moving SW, and a very large hotspot. Read all
to top
Show more
Sierra Negre volcano, Galapagos islands - eruption update
Tue, 25 Oct 2005, 14:12 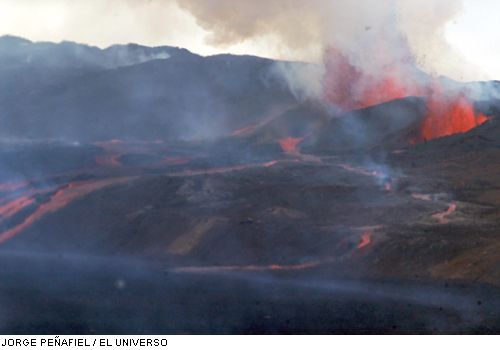 The eruption is continuing from a fissure inside the E part of the caldera of Sierra Negre, with lava fountains up to 200 m tall and large lava flows that have now covered about 20% of the caldera floor. Good eruption viewing possibilities are from a lookout on the caldera rim in the El Cura area. 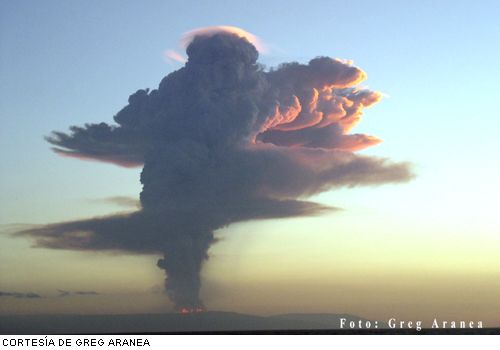 First photographs and more detailed information about the large eruption of Sierra Negre are emerging. As on Monday, 24 October, lava flows from a fissure have travelled 9-10 km away from the fissure. The eruption is accompanied by strong lava fountains. Near the eruption site, the terrain consists mainly of older, unvegetated lava flows. Two flows are travelling towards Elizabeth Bay, while a third one is heading towards Cartago Bay, both uninhabited areas.
The popoluation of Puerto Villamil is not threatened because of its sheltered position at the S of the island.

Read all
Sierra Negra volcano (Isla Isabela, Ecuador) - Smithsonian / USGS Weekly Volcanic Activity Report for 19 October-25 October 2005 (New Activity / Unrest)
Wed, 19 Oct 2005, 06:00
A large eruption began at Sierra Negra on 22 October. According to the Washington VAAC, the eruption began around 1645, sending an ash cloud to ~12.8 km (42,000 ft) a.s.l. that drifted SW. Read all
to top
First visit to our site? If you havn't done it yet, download the Volcanoes & Earthquakes app to get one of the fastest volcano news online:
Android | IOS 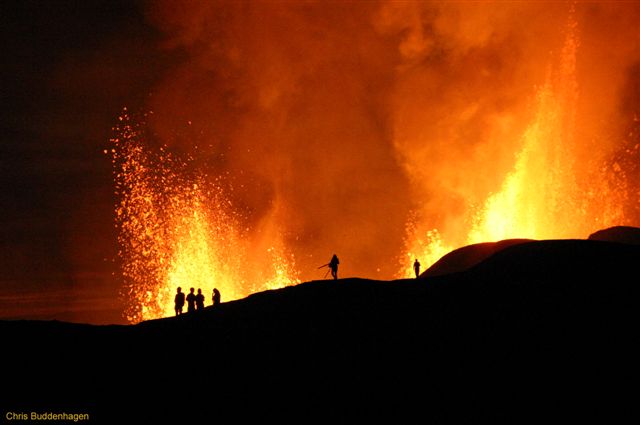 Chris Buddenhagen from the Charles Darwin Research Station, Santa Cruz, Galapagos, sent us this photo from the recent eruption of Sierra Negre volcano, taken on the evening of 27th of Oct. 2005. It shows magnificient lava fountains from the fissure vents.

Igneous or magmatic rocks
The most primitive rock type forms when magma (molten rock) solidifies - either inside the earth (plutonic rocks) or during volcanic eruptions (volcanic rocks). A short overview.
Bromo eruption 2010-11

Photos from Mt Bromo in eruption during 2010-11
The most recent eruption of famous Mt Bromo volcano in East Java, Indonesia.
Guatemala
03-10 April 2022

Volcano Trip
Guatemala is a country with spectacular volcanic activity, wonderful landscapes, colorful villages and towns, friendly people.
Join a trip organized by an experienced Guatemalan guide and photographer Diego Rizzo together with VolcanoDiscovery to have a chance to watch the active volcanoes (Fuego and Pacaya) from up close! Get an in-depth experience of the powerful and turbulent natural processes at work and take stunning pictures!
IOS App

Volcanoes & Earthquakes
Our popular app is now also available for iPhone and iPad! Get the latest volcano news and earthquakes world-wide - it's free!
Latest Quakes

See all earthquakes that happened in the last 24 hours
Get the ad-free version!
Why is there advertising on this site?
Support us - Help us upgrade our services!
We truly love working to bring you the latest volcano and earthquake data from around the world. Maintaining our website and our free apps does require, however, considerable time and resources.
We need financing to increase hard- and software capacity as well as support our editor team. We're aiming to achieve uninterrupted service wherever an earthquake or volcano eruption unfolds, and your donations can make it happen! Every donation will be highly appreciated. If you find the information useful and would like to support our team in integrating further features, write great content, and in upgrading our soft- and hardware, please make a donation (PayPal or Online credit card payment).