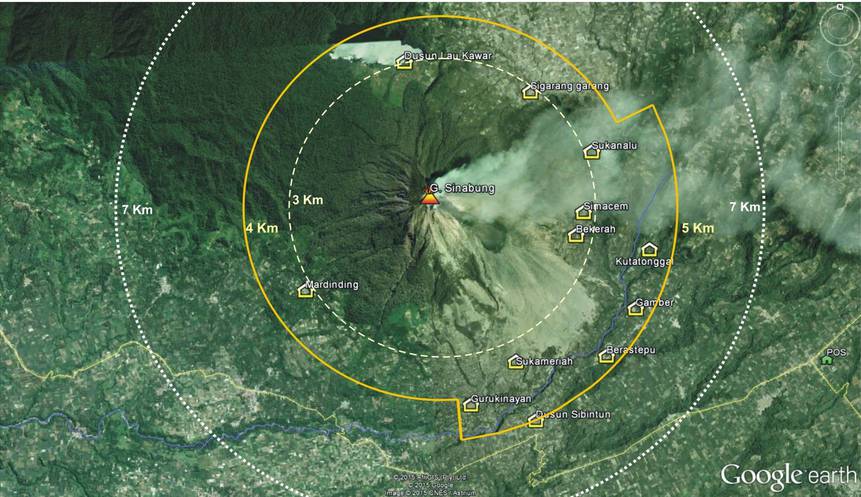 Map of Sinabung with the exclusion zone
According to a news article in the Indonesian press, volcanologists monitoring Sinabung believe that magma supply to the growing lava dome has recently increased.
This will likely result in more and larger pyroclastic flows that can threaten a number of villages that so far have been unharmed. These include Pasarpinter Gurkinayan, Simpang Sibintun, Perjumaan Batukejan, Jembatan Lau Benuken Tigapancur, Pejuman Tigabogor, Pentumbes, Jeraya, and Kutatengah on the SE slope.
The volcano is kepts at the highest alert status ("awas" or 4 out of 4) and an exclusion zone of 7 km is kept in place.
At the same time, only smaller collapse events and a small pyroclastic flow on 7 Aug have occurred during the past week. Most of the previous lava dome and its dangerous lobes clinging onto the steep upper slopes had been destroyed by the collapses in late July and the first days of August.
This apparent calm, however, could make things only worse, as it gives a false sense of safety. Indonesian volcanologist warn that there should be no activities inside the 7 km radius zone (something which is not being observed at all, however).
The evaluation of the situation comes from a drastic increase of certain kinds of earthquakes detected under the volcano, so called low-frequency events that are indicators of internal fluid movements. Their numbers rose from a few events per day to several hundred on Saturday - a clear sign that something had changed inside the volcano, likely a batch of new magma had started to move towards the vent.
---
Links / Sources: 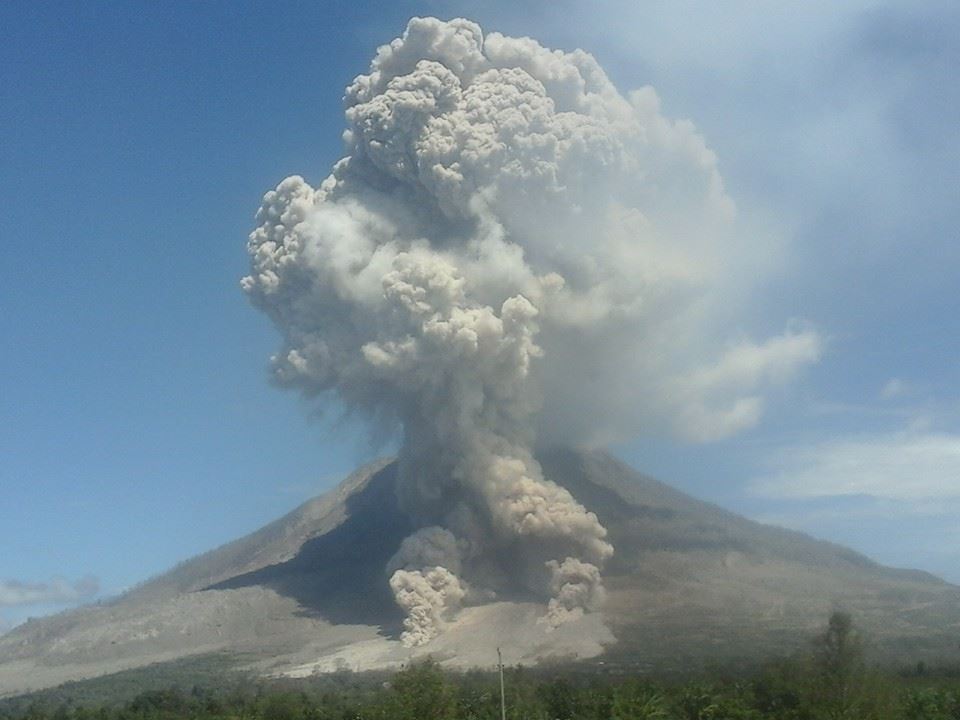 At least two pyroclastic flows occurred today at the volcano, continuing the destruction of the steeply emplaced lava lobes on the upper SE and E side. Read all
Show more
Fri, 31 Jul 2015, 14:37 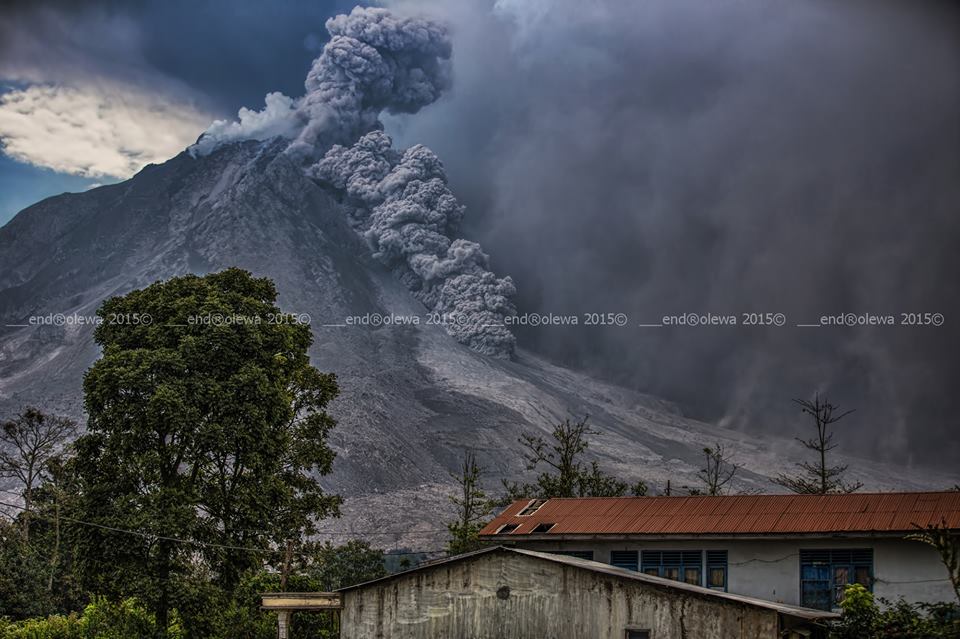 A series of small to medium-sized pyroclastic flows occurred yesterday as a result of the ongoing destruction of the unstable lava lobe present on the upper eastern flank. Read all
Wed, 29 Jul 2015, 06:00

On 4 August BNPB reported that the eruption at Sinabung continued at a very high level. Lava was incandescent as far as 1.5 km SE and E down the flanks, and multiple avalanches were detected. Pyroclastic flows traveled at most 3 km ESE and SE, and ash plumes rose 2 km. ... Read all
Show more
Tue, 28 Jul 2015, 10:07 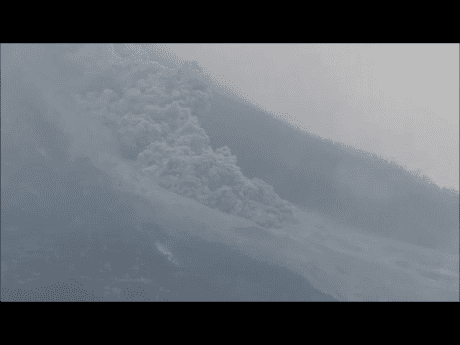 A series of pyroclastic flows yesterday noon (see previous post) and this morning destroyed a part of the eastern lava lobe. ... Read all
Mon, 27 Jul 2015, 08:35 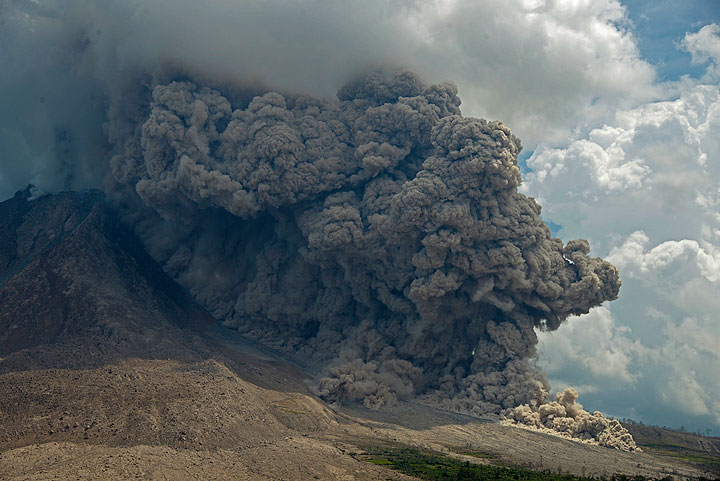 Activity has remained essentially unchanged. Effusion of viscous lava continues at slow pace to feed the lava dome with two active lobes on the SE and E upper flanks. At 12:22 local time today, a small part of the eastern lobe collapsed into a medium-sized pyroclastic flow that traveled approx. 2.5 km towards the outskirts of the (already evacuated and destroyed) villages of Bekerah and Simacem. ... Read all
Show more
Sun, 26 Jul 2015, 15:41 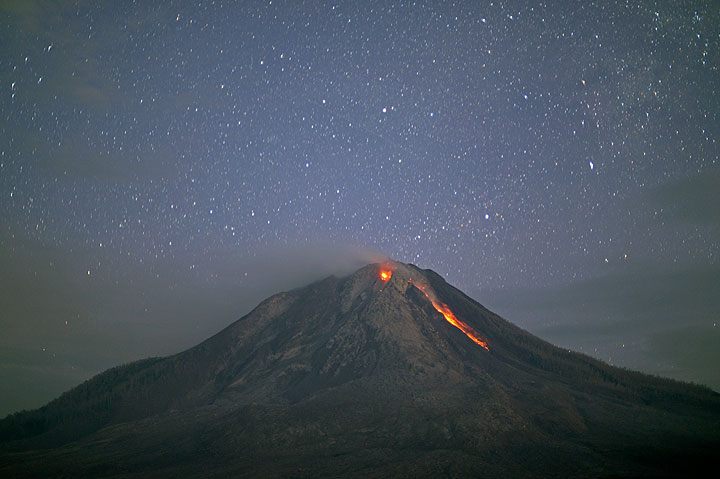 During the past 2,3 days, the volcano has been relatively calm and not produced pyroclastic flows, only small rockfalls from two lava lobes, a smaller and a much larger one, overspilling to the SE and ENE, respectively Read all
Fri, 24 Jul 2015, 11:07 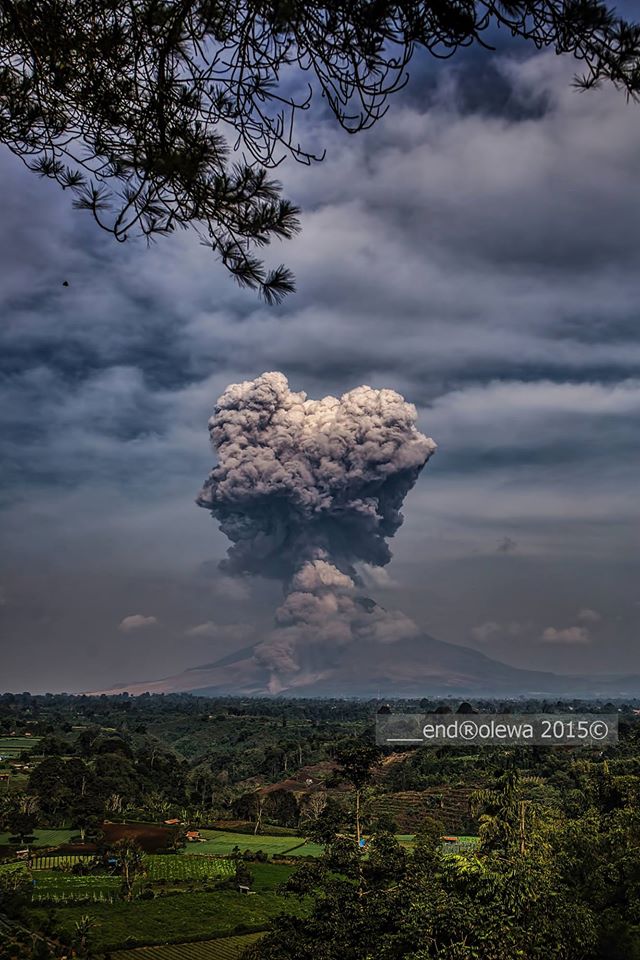 The volcano continues to slowly effuse viscous lava which feeds the lava dome on its summit. This activity results in numerous avalanches and pyroclastic flows. ... Read all
Wed, 22 Jul 2015, 06:00

Volcanoes in the Solar System
The Earth is not the only place with volcanic activity. Active volcanism also occurs at at least 3 other bodies in our Solar System.
Milos Geo Tour

Island of Venus
Milos Island in Greece is one of the most beautiful and photogenic islands of the Mediterranean. Its boasts breathtaking scenery of colorful volcanic rocks, some of the finest beaches of the country, a rich archeological heritage, great hospitality and delicious local cuisine. Come join us to explore this magical island on a 6-days geological tour!
Kuril Islands

Photos from the Kuril Islands
Some rarely visited volcanoes, unspoiled nature, lots of WWII remnants - browse through several galleries from our tours to the Kuril Islands.
Volcano Database

Ambrym volcano photos
Ambrym (Vanuatu) is one of the most active volcanoes in the world. Its vast caldera has an amazing moonscape and several active vents that contain boiling lava lakes, most famous Marum and Benbow.
Get the ad-free version!
Why is there advertising on this site?