Current SOSO seismogram from station (INGEOMINAS)
There were a total of 36 seismic events associated with fracturing of rock, of which 29 were characterized by low energy level. The remaining, higher energy level, were located mainly in an area between 1 and 2 km north of the volcano, at depths between 1 and 6 km and with local magnitudes around 0.1 degrees on the Richter scale. Read all
Sotará volcano (Colombia) activity update: weak shallow earthquakes
Wed, 19 Sep 2012, 10:05

Seismic signal this morning (SOSO station, INGEOMINAS)
Small earthquakes at shallow depth, 25 in total during the past 7 days, continued to occur at 1-6 km depth in an area 1-2 km N of the summit.
Sotará volcano (Colombia) activity update
Thu, 13 Sep 2012, 10:05

Current seismogram from Sotará (SOSO station, INGEOMINAS)
Seismic unrest continues at Sotará. In the week between 5-11 Sep there were in total 82 events, INGEOMINAS reports. This includes about 50 small quakes of magnitudes between 0.1-1.6 at shallow depths of 1-6 km in an area 1-2 km north of the summit.
to top
Show more
Sotará volcano (Colombia) activity update: seismic unrest
Tue, 11 Sep 2012, 10:05

Current seismic signal (SOSO station) from Sotará (INGEOMINAS)
A total of 71 volcanic quakes were recorded over the past week. Most were very week, but 6 had magnitudes between 0.1 and 1.3 and were located 1-2 km N of the summit at depths between 2-3 km. A possible inflation of the NE sector of the volcano is being detected on tilt meters.
Sotará volcano (Colombia) activity update: increases seismic activity, shallow earthquakes
Wed, 22 Aug 2012, 10:05

Current seismogram from Sotará (SOSO station, INGEOMINAS)
Seismicity has been on the increase at the volcano. Over the past 7 days, INGEOMINAS registered 151 volcano-tectonic quakes, out of which 15 were of significant size (magnitudes 0-1) and located at shallow depth between 2 and 6 km in an area 0.1-5 km NE from the the summit. Visual observations show no signs of surface activity.
to top
Sotara volcano (Colombia) - Smithsonian / USGS Weekly Volcanic Activity Report for 15 August-21 August 2012 (New Activity / Unrest)
Wed, 15 Aug 2012, 06:00
According to INGEOMINAS, the Observatorio Vulcanológico and Sismológico de Popayán reported that during 8-14 August seismic activity at Sotará increased. The seismic network recorded 110 magnitude 0.2-1.6 events mainly located in an area 0.1-5 km NE of the peak, at depths of 2-6 km. Inflation was detected in the NE area, coincident with the zone of increased seismicity. Read all
Sotará volcano (Colombia) activity update: elevated seismic activity
Tue, 14 Aug 2012, 10:05 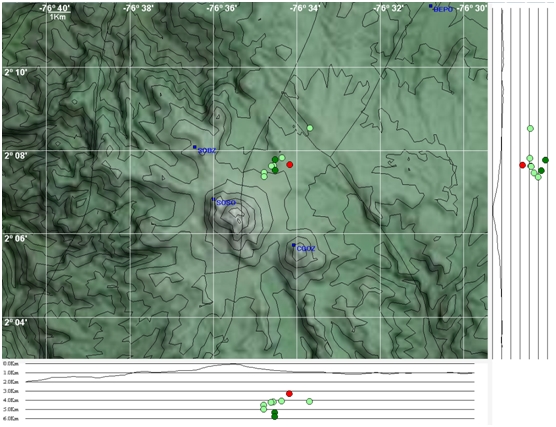 Seismic recording from Sotara (29 July) (INGEOMINAS)
Volcanic unrest has been detected recently at Sotara volcano. An increased number of small volcanic earthquakes is visible on seismic recordings.
to top

Photos from Mt Bromo in eruption during 2010-11
The most recent eruption of famous Mt Bromo volcano in East Java, Indonesia.
Seismographs

Fascination Volcano
Discover with us the fascinating natural history of Santorini volcano in Greece on this walking and study tour.
Volcano Webcams

Volcano Photography group on facebook
Join our group on facebook if you are a fan of volcano photography (and videos), meet others, show your work!
Get the ad-free version!
Why is there advertising on this site?
Support us - Help us upgrade our services!
We truly love working to bring you the latest volcano and earthquake data from around the world. Maintaining our website and our free apps does require, however, considerable time and resources.
We need financing to increase hard- and software capacity as well as support our editor team. We're aiming to achieve uninterrupted service wherever an earthquake or volcano eruption unfolds, and your donations can make it happen! Every donation will be highly appreciated. If you find the information useful and would like to support our team in integrating further features, write great content, and in upgrading our soft- and hardware, please make a donation (PayPal or Online credit card payment).