There are numerous detailed reports and analysis about this famous eruption. Interested readers are referred to start at the website of the USGS Cascades Volcano Observatory, and the GVP monthly reports covering the events of this eruption.
Only a brief summary of the most significant events is given here, based largely on information available from these sources.
20 March, 1980Moderate earthquakes herald new activity and rising magma after a repose of at least 100 years.

25 March
The mountain is closed to climbers.

27 March
The first eruption takes place. A loud noise is heard more than 15 km from the summit. The initial steam-and-ash explosions are phreatic in origin caused by overheated water trapped beneath the summit explodes. Ash reaches 3 km height above the summit and a new crater is formed.

31 March
Ash from the continuing explosions is blown to the west to more populated areas. Ashfall began about noon in the Kelso-Longview area (population 75,000), about 65 km W, leaving a thin layer of light-colored, abrasive material.
3 earthquakes of M 4.5-4.7 were recorded only 1 km beneath the summit.

1 April
Ash from a large explosion reaches Spokane, 500 km to the E.

3 April
State of Emergency is declared.

12 April
A comparison by the 1952 topographic map of Mt. St. Helens with airphotos taken 7 and 12 April 1980 indicate substantial uplift on the upper N flank. The volcano's northern flank begins to form the famous bulge which will collapse a month later.
USGS in cooperation with the University of Washington, the United States Forest Service (USFS), and others, increase the monitoring efforts.

22 April - 7 May
Bulging of the upper north flank continues.

7 May
Large earthquakes are measured. Ash and steam explosions resume after a quiet interval of 2 weeks.

12 May
An unually large earthquake causes a 1 km long avalanche on the north slope.

12-17 May
Several tens of earthquakes per day of M 3 or greater are recorded each day. Since the USGS began daily measurements of the N flank bulge on 25 April, the north flank bulge moved 1.5-2 m/day to the NNW. By 18 May, it had reached about 50 m total displacement.

17 May
30 car loads of residents are allowed briefly to enter the restricted zone in order to gather possessions.

18 May 1980
The large eruption began at 8:32 am following an M5 earthquake. The earthquake caused the collapse of the bulge and the entire northern flank of the volcano was dissected by a rupture. Ca. 3 cubic km of the mountain slid down in a massive avalanche reaching maximum speeds of 70 to 150 miles per hour (ca. 100-200 km / hr). The massive avalanche raced downslope, displaced the water of Spirit Lake, and struck a ridge about 8 km to the N. Most of the avalanche material then turned W and flowed down the N fork of the Toutle River (the outlet of Spirit Lake). The avalanche reached as far as 30 km distance.
The avalanche lowered the pressure on the volcano and resulted in a giant explosion, which was directed to the north in a giant lateral blast, heard 350 km away: traveling at speeds of more than 300 km/hr, a mixture of hot gas and rock fragments was expelled and rapidly overtook the landslide traveling underneath.
As if that was not enough devastation: immediately after the blast, 30 seconds later, magma exploded from the summit crater and produced a Plinian eruption column of pumice and ash which rose to a height of 23 km in 15 minutes. The ash reached the town of Spokane 430 km away in 3½ hours. From noon until 5:30 pm pyroclastic flows swept down the northern slopes of the volcano at speeds of up to 300 km/hr and reached 8 km distance. Mudflows raged down the side of the volcan and were caused by melting of the snow on the mountain. 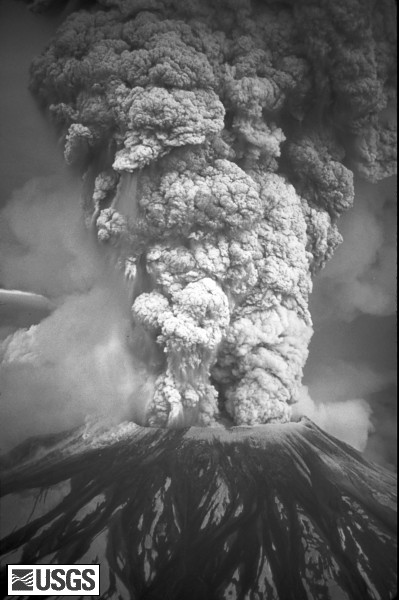 For more than nine hours a vigorous plume of ash erupted, eventually reaching 12 to 15 miles (20-25 kilometers) above sea level. The plume moved eastward at an average speed of 60 miles per hour (95 kilometers/hour), with ash reaching Idaho by noon. By early May 19, the devastating eruption was over. Shown here is a close-up view of the May 18 ash plume.
Try our free app!

Check if seismic activity worldwide or in a specific area has increased or decreased!
Raung

Raung volcano photos
One of the largest and most active volcanoes in East Java, rarely-visited and relatively unknown Raung became (in)famous during its recent eruption in 2015 when its frequent ash plumes forced the repeated closure of Bali's airport.
Methana 18-25 Mar 2023

Land of Theseus
The Saronic Gulf opposite Athens is one of the most beautiful and interesting areas of Greece, full of beautiful landscapes, small towns, islands, archeological remains and one of Europe's least known active volcanic areas. Join us on a relaxing tour to discover this fascinating area!
Tour types

Find an earthquake
Look up quakes anywhere in the world, near your city or region!
Get the ad-free version!
Why is there advertising on this site?