Updated: Oct 28, 2021 11:17 GMT - Refresh
as observed by volcanologist Dr Ingrid Smet (text & photos)
The volcano remains at a level of higher than usual activity with very frequent Strombolian explosions. Some of these are so strong that at night one can observe the glowing bombs from the village. The lava flows that occurred after the 3 July paroxysm are also still active on the upper parts of the western edge of the Sciara. 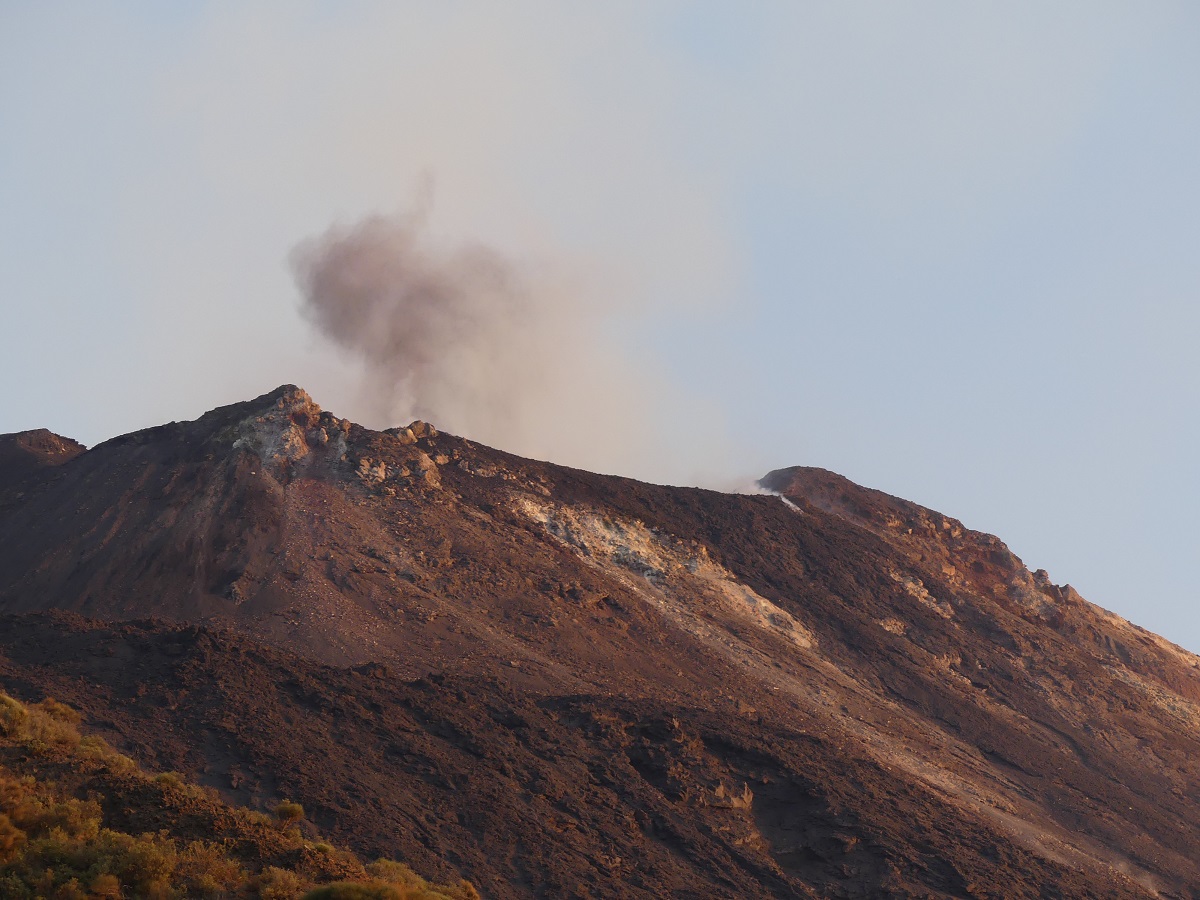 Fig 1: crater terrace as seen from the eastern side of the Sciara. 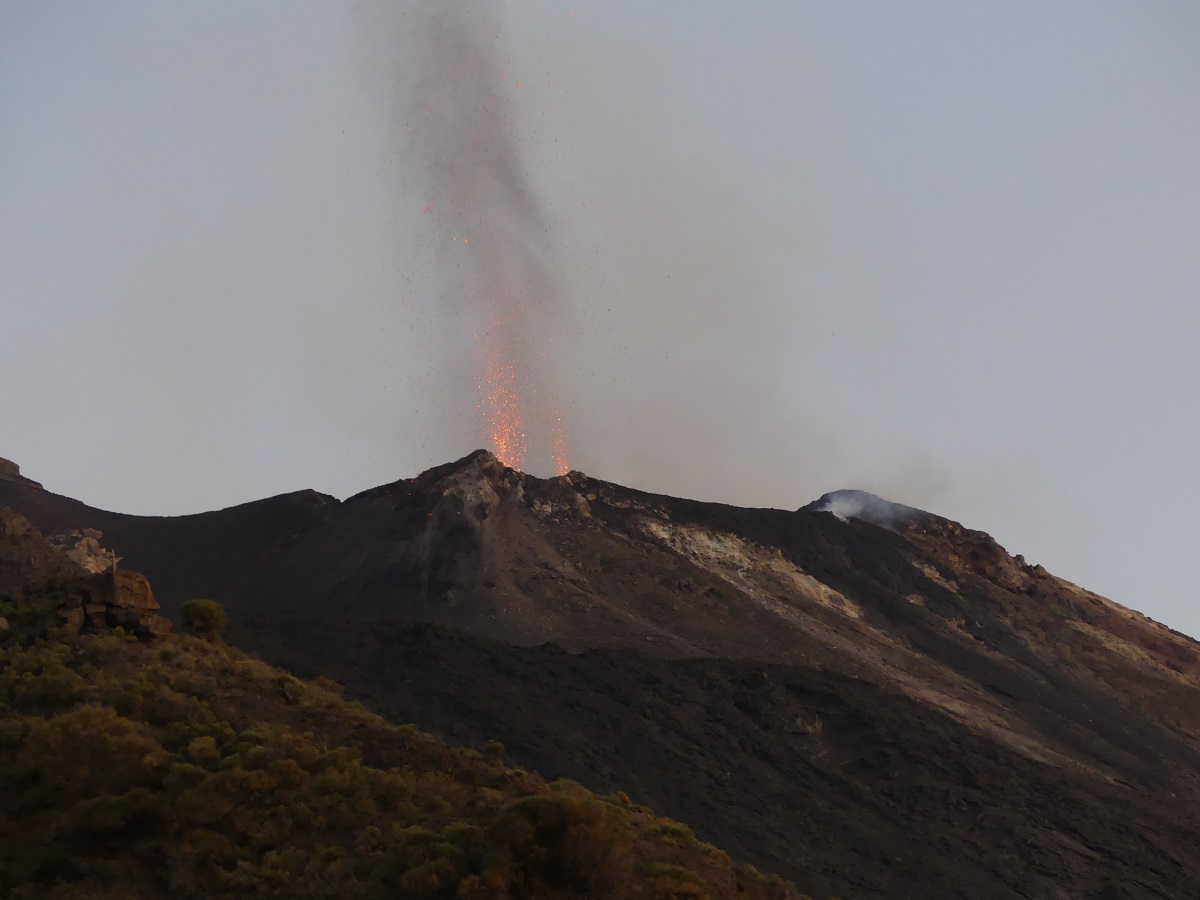 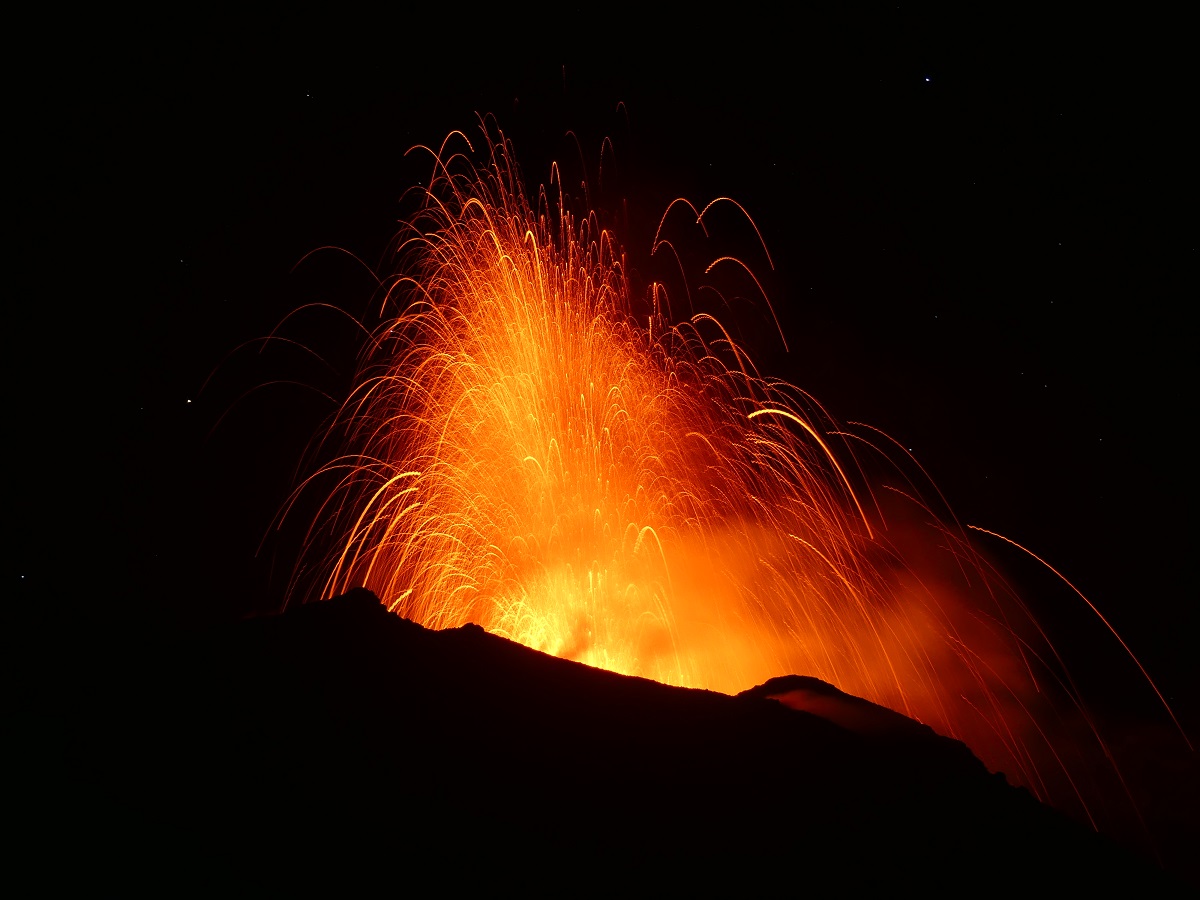 Fig 3: impressive Strombolian explosions as large bubbles of lava burst about 4-7 times per hour from a vent in the central-western crater area 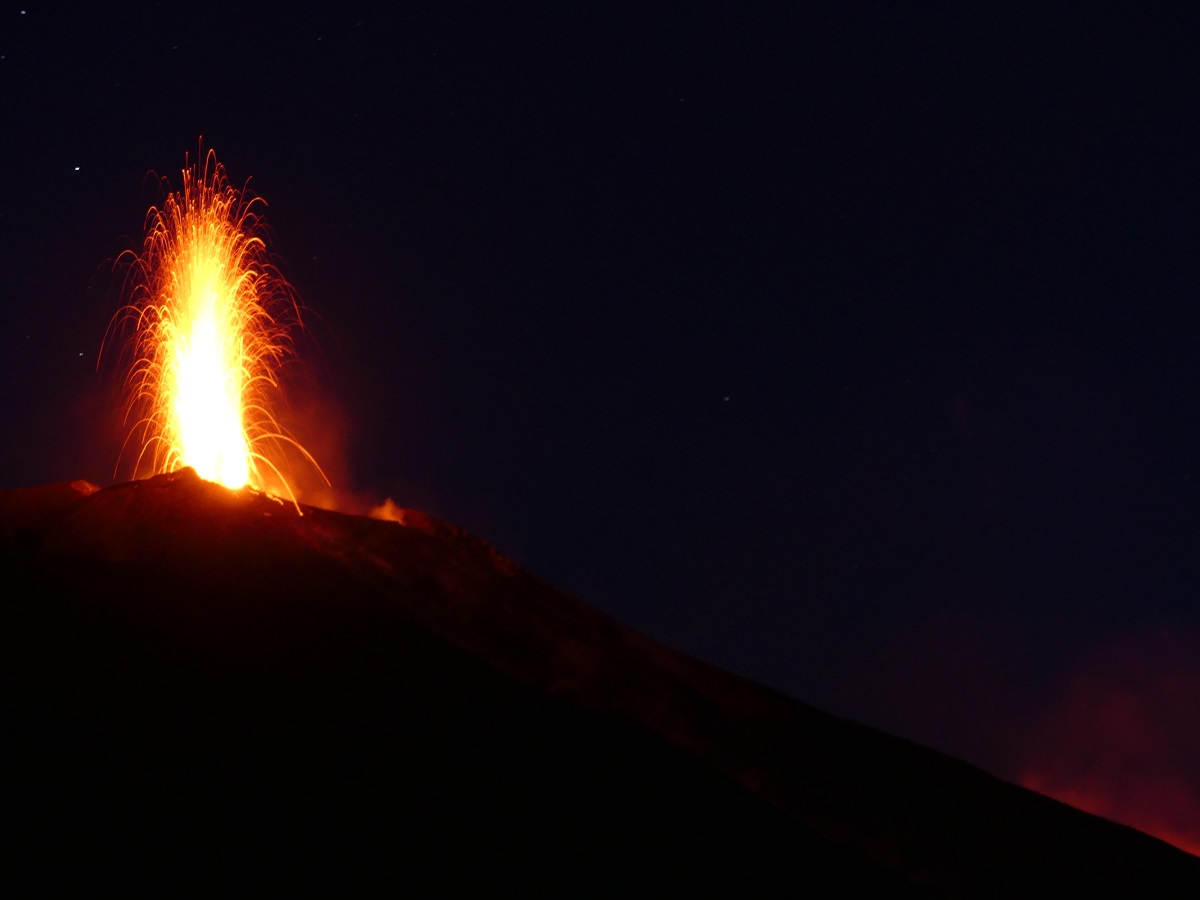 Fig 4: simultaneous eruption of 2 candle-like explosions and the red glow of the lava flows in the bottom right corner. 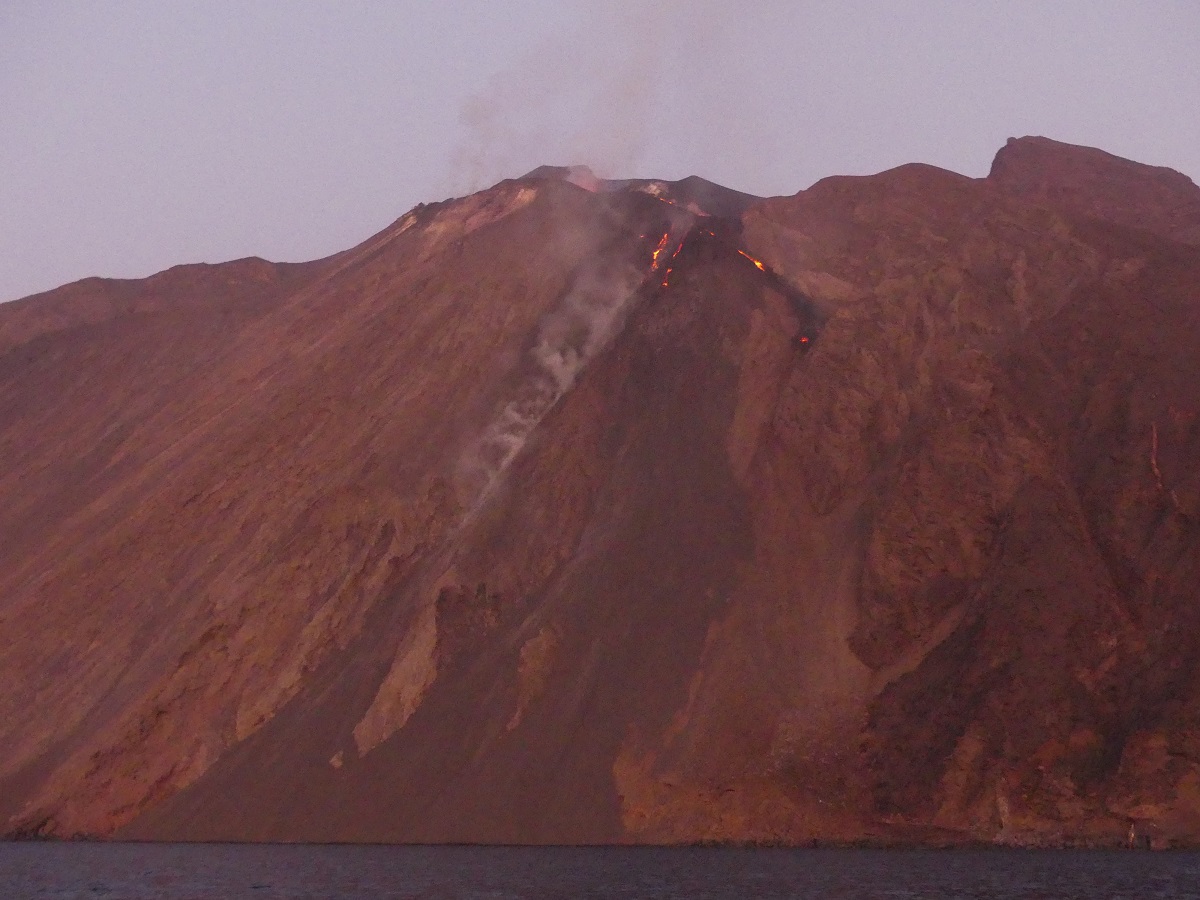 Fig 5: the western side of the Sciara with the darker deposits of lava flows that reached the sea a few weeks ago and of which the upper parts were still active. 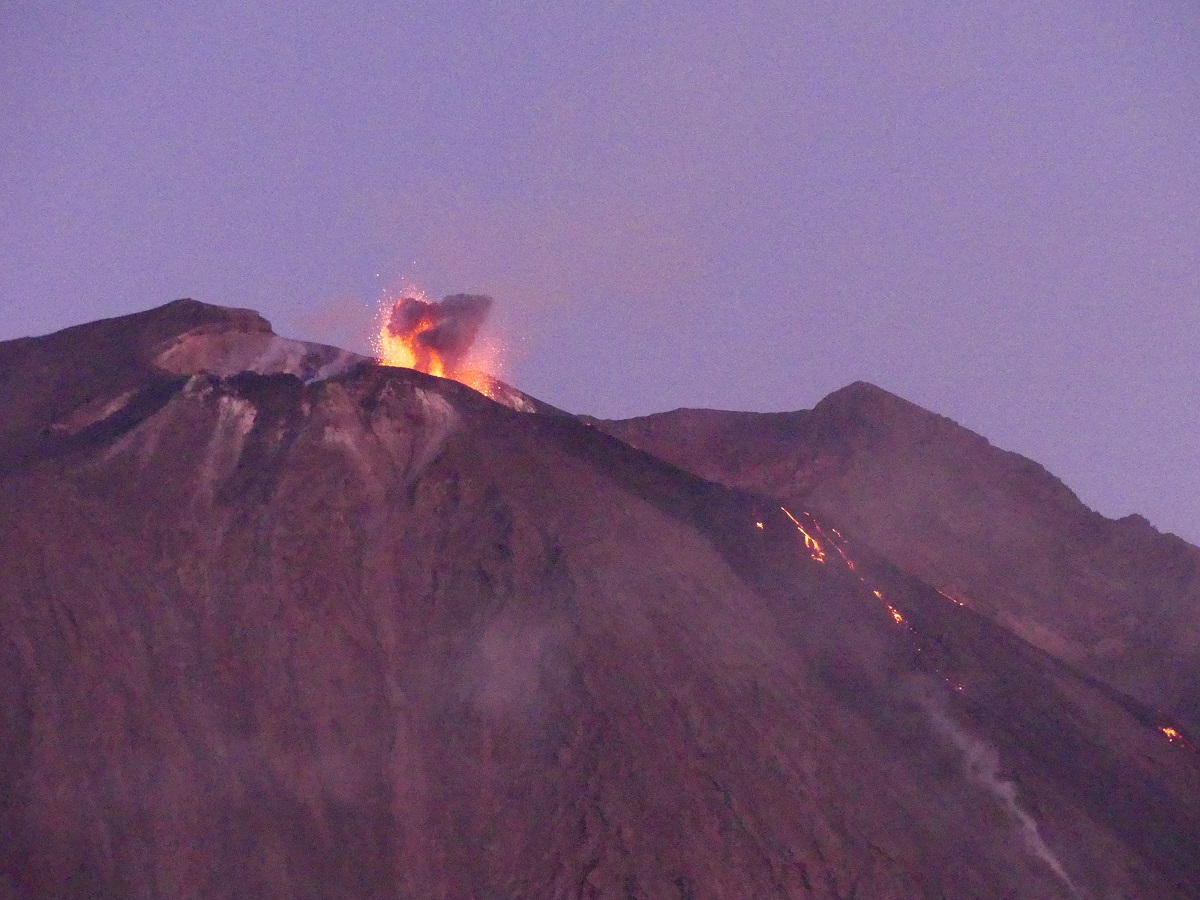 Fig 6: start of a large Strombolian explosion from the central-western vent and the active parts of the lava flows on the western side of the Sciara. 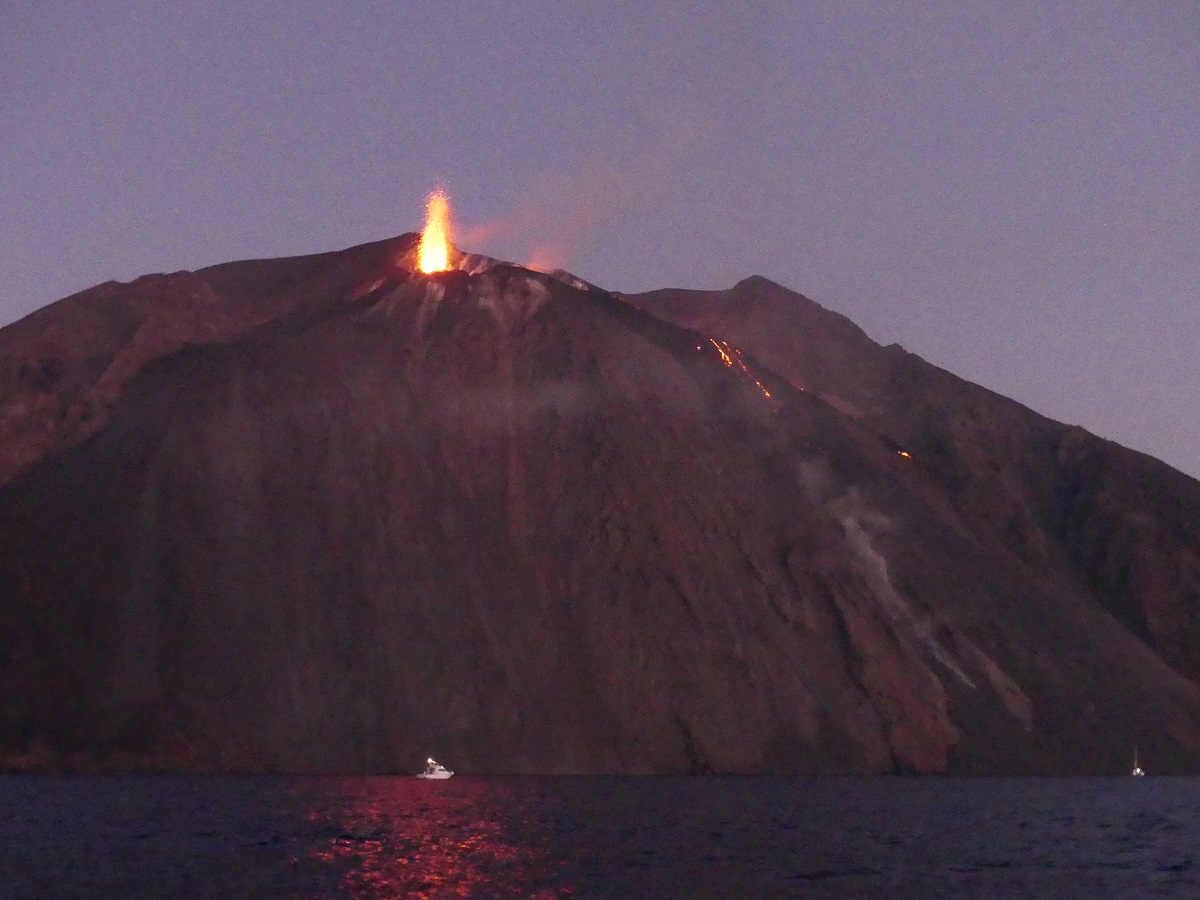 Fig 7: red glow of a double candle-like explosion from the eastern vents reflected in the sea.
"We arrived on Stromboli Wednesday afternoon 24 July and made our way to the Sciara del Fuoco after about 18h30. Dark grey ash clouds from stronger explosions could already been observed from the village and made us hopeful for a great show that same night. Indeed, as we got nearer the volcano we started to hear the loud noise of explosions as well as jet engine-like degassing.
And before even reaching the eastern edge of the Sciara del Fuoco (the ancient collapse scar from where one can look up to the ca. 650 m high crater terrace from where the lava erupts) we had already identified some deep red glow among the bombs thrown out in larger explosions...
We walked the path along the Sciara up to where it is fenced off (about 300 m above sea level) and from there observed the volcano throughout sunset and the first hours of the night. The old morphology of the crater terrace has changed radically as the large NE spatter cone disappeared and in its place there seems to be a depression from where the different vents now erupt.
Figure 1 shows the crater terrace as seen from the eastern side of the Sciara, with many white deposits just below the rim of the new terrace level indicating strong hydrothermal activity. In this photograph one can also see darker lava that overflowed the new crater terrace after the 3 July paroxysm, and in the left bottom foreground the darker deposits of the August 2014 lava flows.
There were Strombolian explosions about every 5-10 minutes but continuous spattering might have been going on inside the terrace depression as well. At the location of the old NE spatter cone there now seem to be two vents which produce candle-like explosions that last a few seconds (see Fig 2) and usually erupt at the same time, up to 3 times an hour.
Intense glow, smaller Strombolian explosions and/or jet-engine sounds of degassing were observed from several vents in the central part of the crater terrace.
One vent in the central to western part of the crater terrace produced impressive Strombolian explosions as large bubbles of lava burst about 4-7 times per hour (see Fig. 3). Large explosions from this vent throw incandescent bombs a good few hundreds meters up in the air since we could observe them from our hotel in Stromboli village the following night!
As night fell and we enjoyed the spectacle of varied fireworks from Stromboli's crater terrace, we also observed a red glow about one third down the Sciara, indicating that there were still active lava flows on the western side (see Fig. 4).
So the next evening, Thursday 25 July, we made a boat excursion to observe what remains of the lava flows that reached the sea after the 3 July paroxysm. On our way to the Sciara del Fuoco we could clearly see the burnt areas of the volcano's summit reaching down to the village of Ginostra. The bush fires that were started by the lava bombs of the 3rd of July eruption are still re-igniting despite having been put out many times before. As we passed, bushes were burning on a steep flank between the villages of Ginostra and Stromboli. Once the upper parts of the Sciara were visible we could identify multiple orange-red ribbons of lava overflowing from the western part of the crater terrace, their lava flow fronts reaching about one quarter to one third down the Sciara.
Figure 5 shows the western side of the Sciara with the darker deposits of lava flows that reached the sea a few weeks ago and of which the upper parts were still active. Figure 6 captures the start of a large Strombolian explosion from the central-western vent and the active parts of the lava flows on the western side of the Sciara.
In Figure 7 once can see the red glow of a double candle-like explosion from the eastern vents reflected in the sea below the Sciara, as well as a red glow above the centra-western vent, the active 2019 lava flows to the right and the darker deposits of the august 2014 lava flows running down left of the explosion. Large Strombolian explosions were seen (and in one case even heard!) from the village of Stromboli during the night from 25 to 26 July, and as we were waiting to take the hydrofoil back to Milazzo on Friday morning 26 July we had a continuous rain of fine volcanic ash."

Batu Tara photos
A remote island in the Flores Sea of Indonesia formed by a single volcano that has been in strong strombolian eruption for years. We regularly lead expeditions to there where we camp several days to observe it.
Bárdarbunga

Bárdarbunga eruption 2014
Photos from the Holuhraun fissure eruption: large lava fountains and lava flows from close!
Support us
If you find the website useful and would like to support us and help keep it alive and improve it, please consider making a small donation. Thank you!
Quake-O-Meter

Check if seismic activity worldwide or in a specific area has increased or decreased!
Feedback