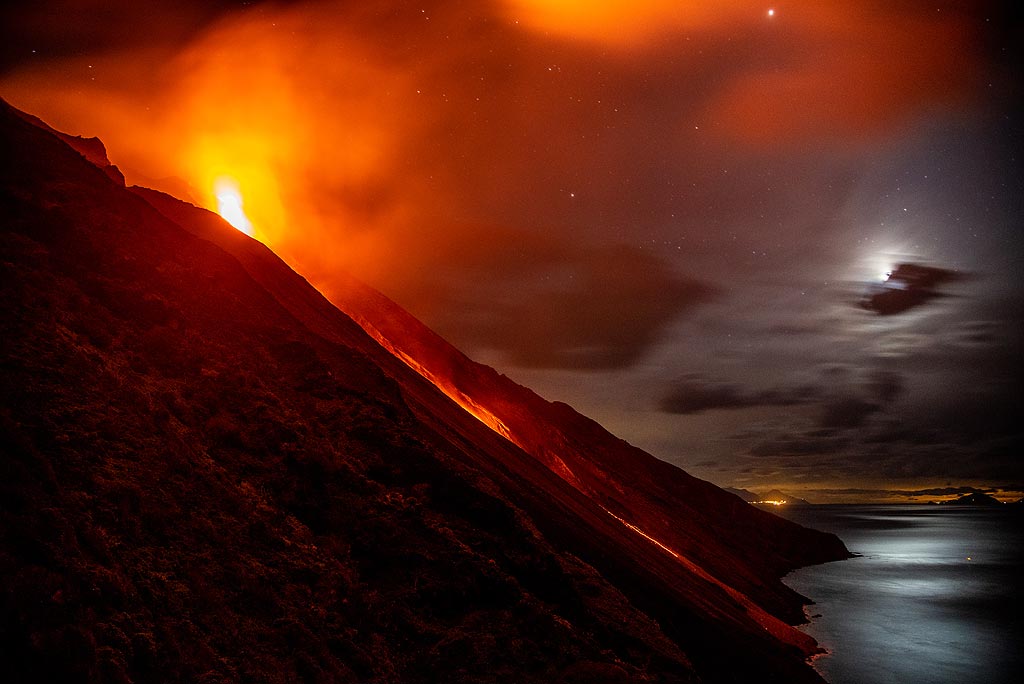 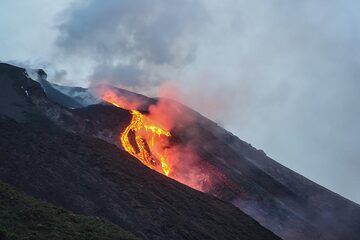 The active part of the lava flow below the summit craters 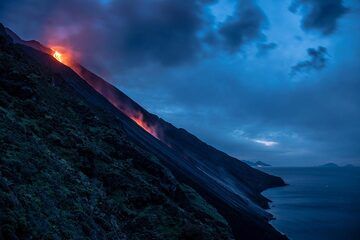 The lava flow at dusk 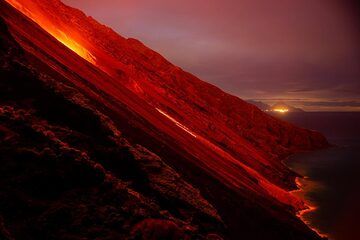 The red-illuminated Sciara del Fuoco with the lights of Salina Island in the background
The lava flow seems to have decreased over night although probably remains active in the upper part of the Sciara del Fuoco.
After our recent Etna special tour, Tom decided to visit Stromboli island on his way home. At 3.30, while the ferry was at neighboring Panarea island, a large brownish ash plume could be seen rising from the area of the Sciara del Fuoco on Stromboli island in the distance, a tell-tale sign that a landslide had occurred, which was the case, as a result or trigger, or both, of a magma surge leading to the new lava overflow.
Last night, the activity was very impressive to observe: A well-fed flow emerged from a breach in the northern crater rim, then split into two arms, one of which formed a broad lava fall over a cliff about 50 m from the vent. Below this area, the lava formed 3 parallel arms that entered a gully (formed by previous landslides), hiding the flow from direct view.
Judging from the glow, the lava flow front reached a few hundred meters below the crater area. Occasional glowing rockfalls descended to near the coast.
The typical strombolian-type activity continued from the northeastern summit vents as well, at intervals of 5-20 minutes. Most eruptions were small, but occasional larger ones formed small fountains reaching approx. 200 m height. In addition, some of the vents produced loud degassing noises from time to time. 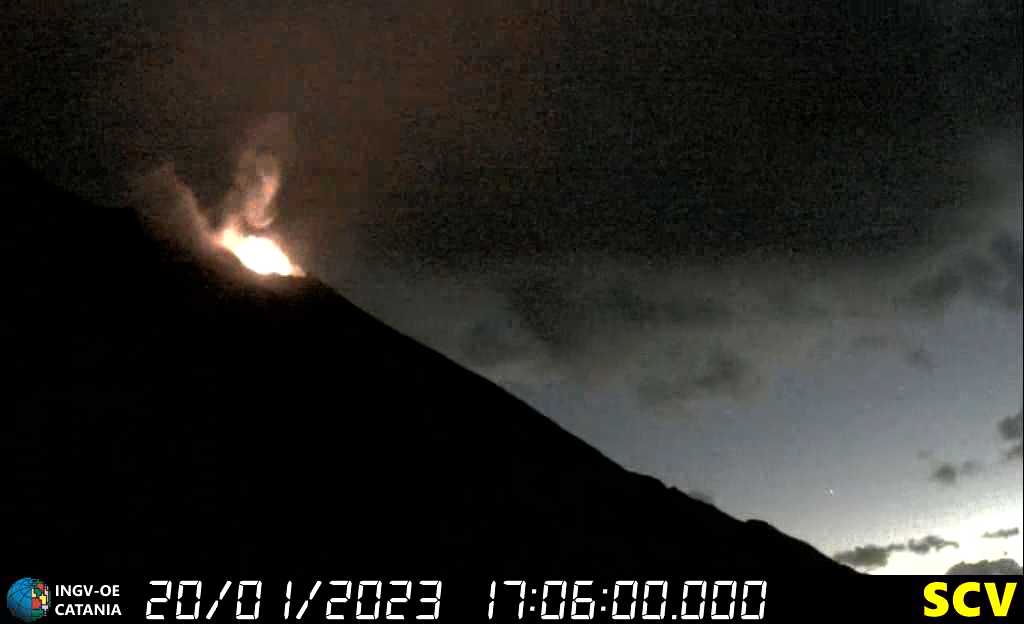 The latest available report from the volcano observatory in Catania INGV seems to confirm that the latest lava flow has rapidly decreased its advance and is cooling at the time of this update. ... Read all
Show more
Fri, 20 Jan 2023, 09:00 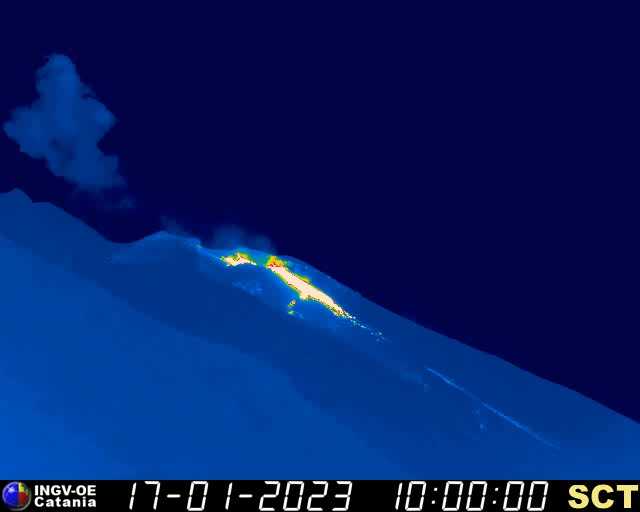 The volcano observatory in Catania (INGV) reported that a new short lava flow started to overflow from the North crater area this morning. ... Read all
Show more
Wed, 11 Jan 2023, 15:00

INGV reported that both explosive and effusive activity at Stromboli occurred during 2-8 January at four vents in Area N, within the upper part of the Sciara del Fuoco, and at one vent in the Area C-S (South-Central Crater area) in the crater terrace area. The explosions were variable in intensity and ejected coarse material (bombs and lapilli) 80-150 m at a rate of 3-10 explosions per hour. Intense spattering from all four vents occurred during the week. ... Read all
Thu, 5 Jan 2023, 10:22

The active short lava flow started to decrease its advance and showed signs of being cooled. ... Read all
Show more
Tue, 3 Jan 2023, 05:25 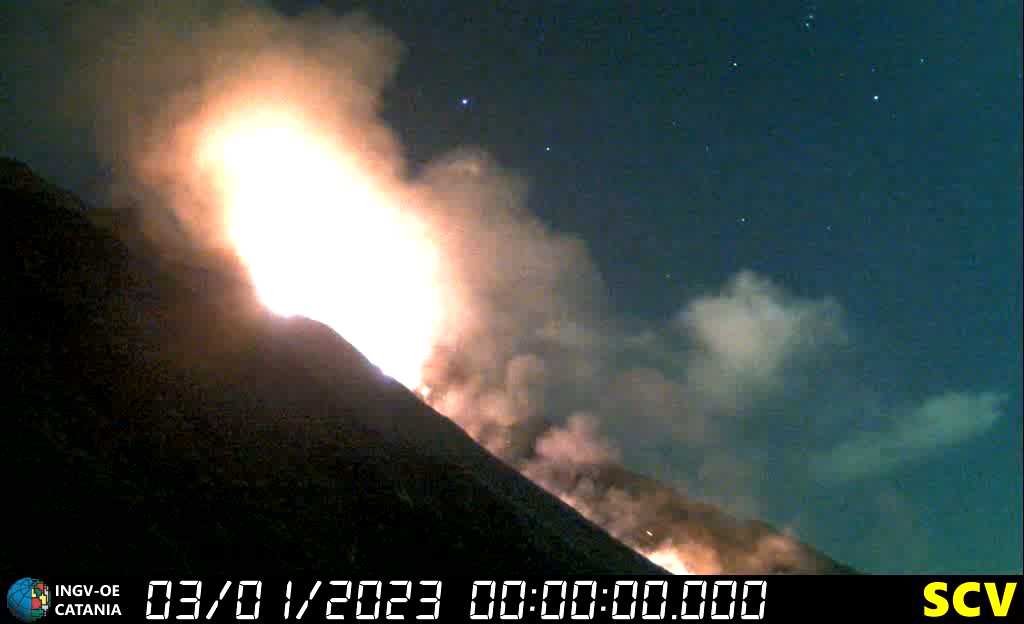 The volcano observatory in Catania (INGV) reported the continuous effusive activity from the North crater area. ... Read all
Thu, 29 Dec 2022, 04:12 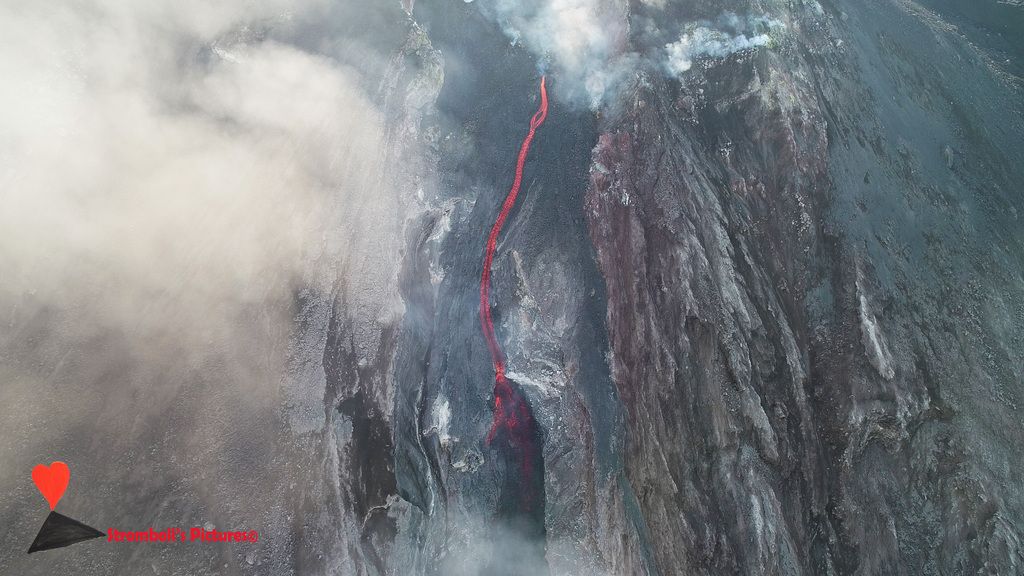 INGV reported that both explosive and effusive activity at Stromboli were observed during 19-25 December at four vents in Area N, one N1 vent and three N2 vents; all were located in the upper portion of the Sciara del Fuoco. Explosions from the vents were variable in intensity and ejected coarse material (bombs and lapilli) 80-150 m high at a rate of 3-10 explosions per hour. Intense spattering from all four vents occurred during the week. ... Read all
Tue, 27 Dec 2022, 04:26 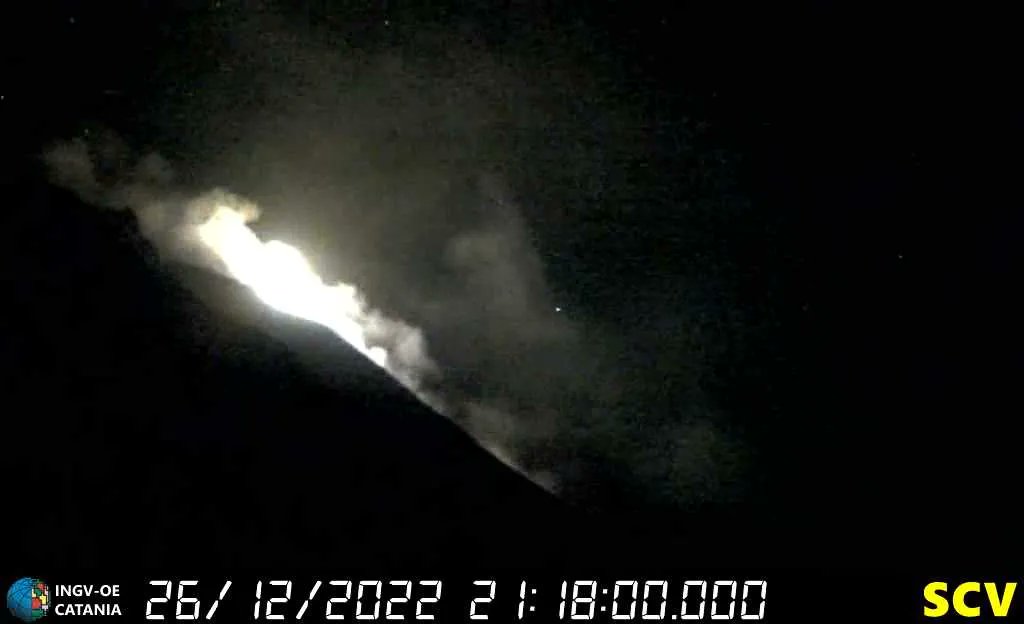 Volcanoes in the Solar System
The Earth is not the only place with volcanic activity. Active volcanism also occurs at at least 3 other bodies in our Solar System.
Santorini 1600 BC

Ijen volcano photos
Ijen volcano in East Java is famous for its turquoise acid crater lake and the large sulfur deposits that are being mined by local workers. At night, the scene is illuminated by ghostly blue flames, as sulfur ignites.
Iceland
30 Jul-16 Aug 2021

Colors of Iceland
Discover Iceland's fascinating geology and volcanic activity on this relaxed photo and geo tour! Get to see the new volcanic eruption on the Reykjanes peninsula from close!
Get the ad-free version!
Why is there advertising on this site?