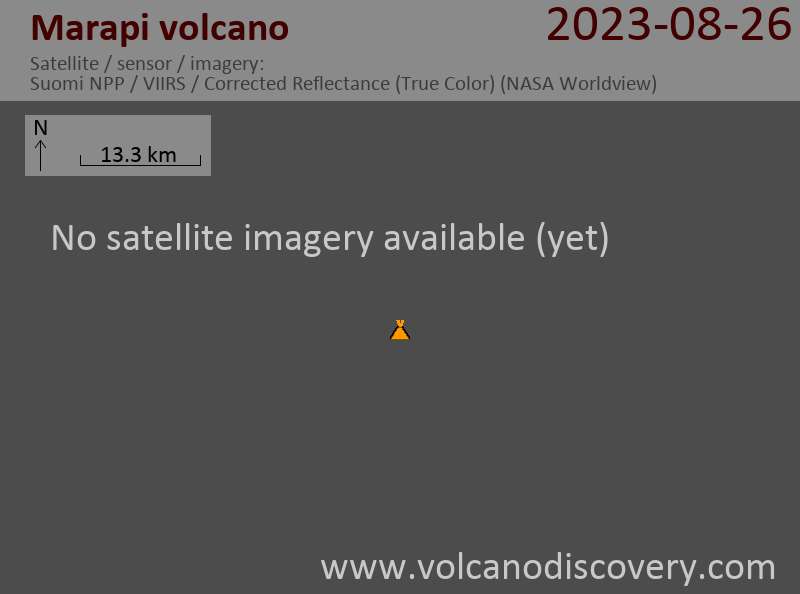 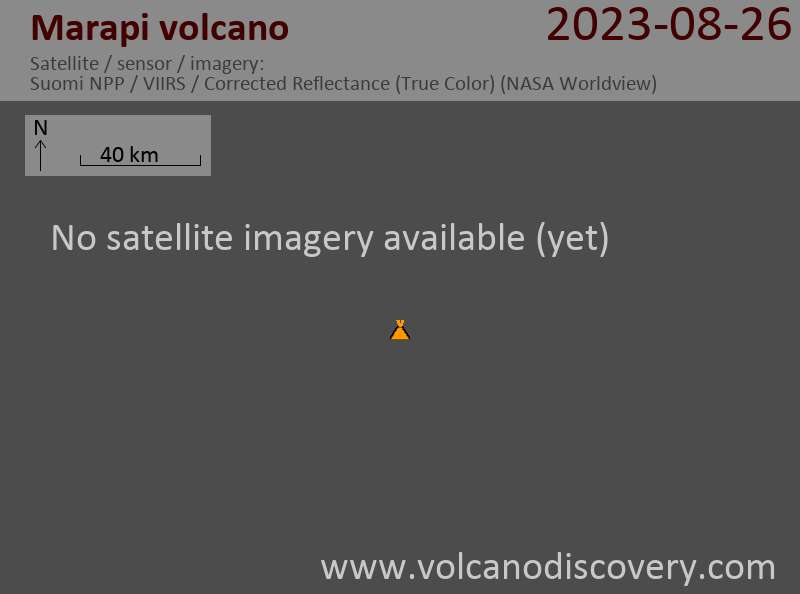 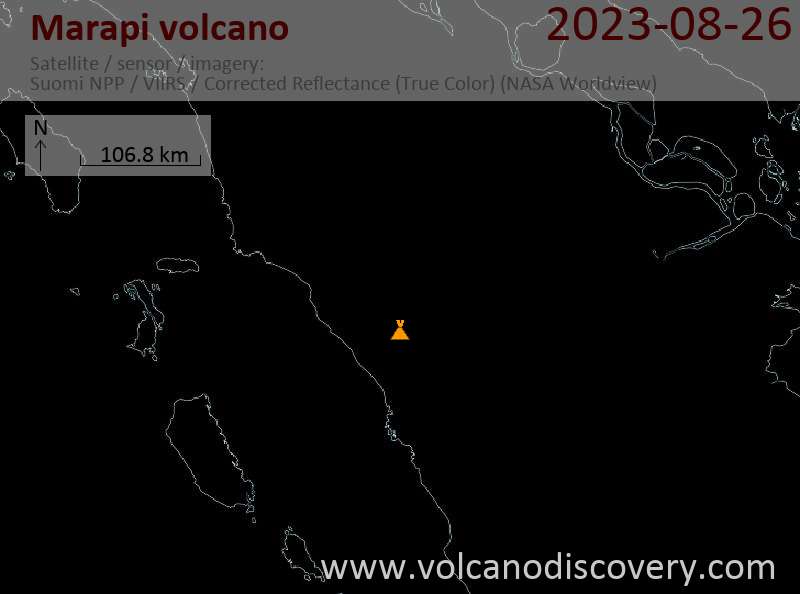 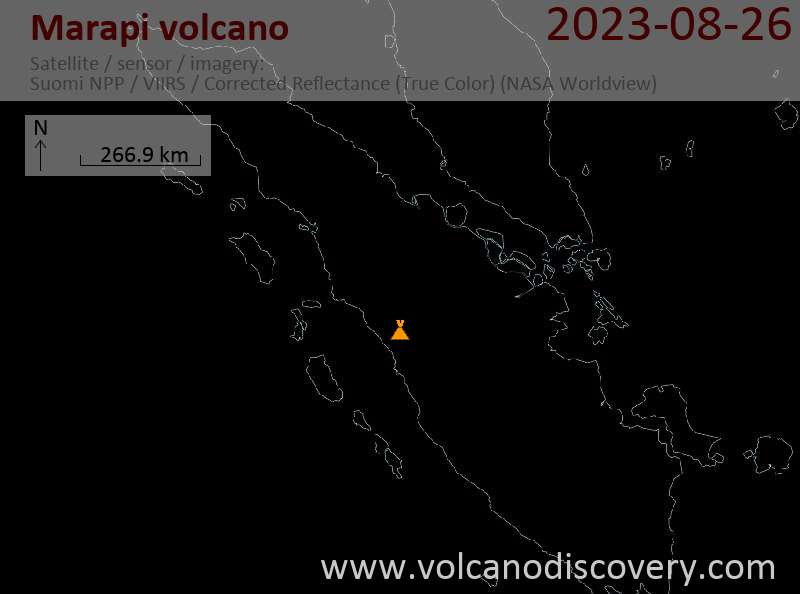 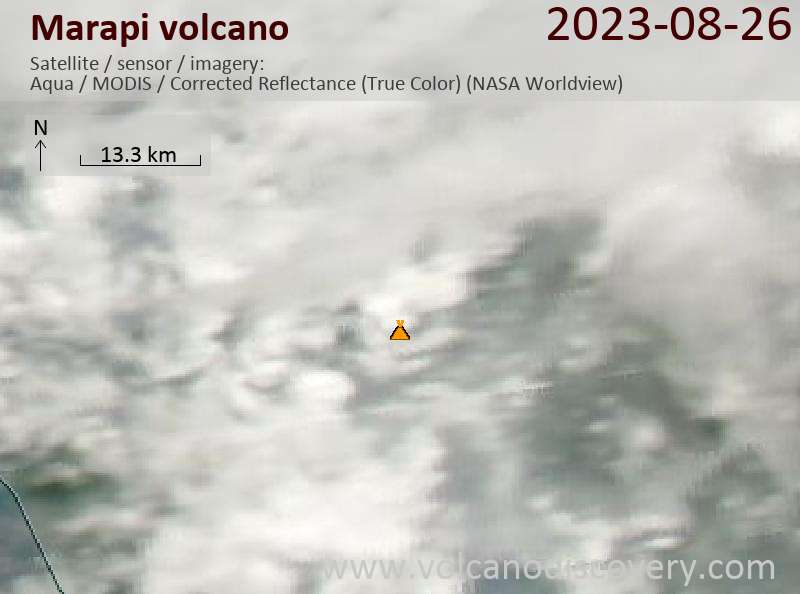 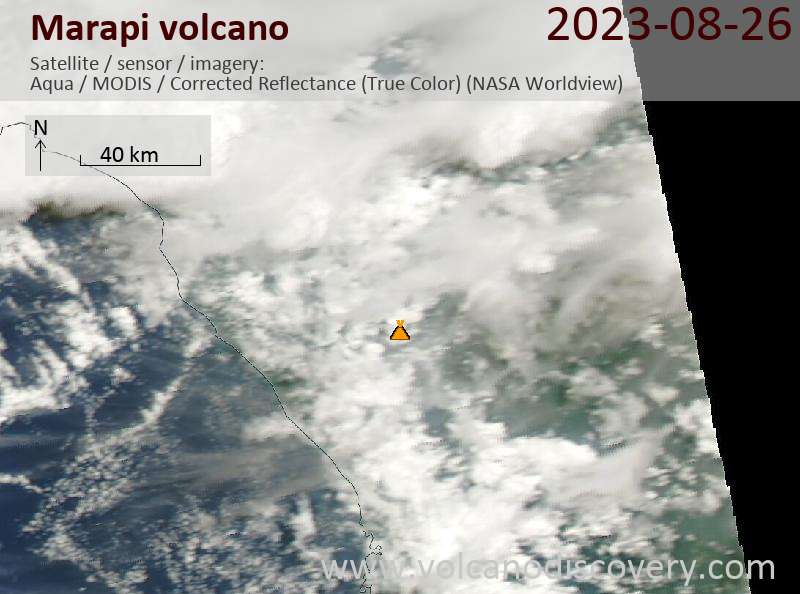 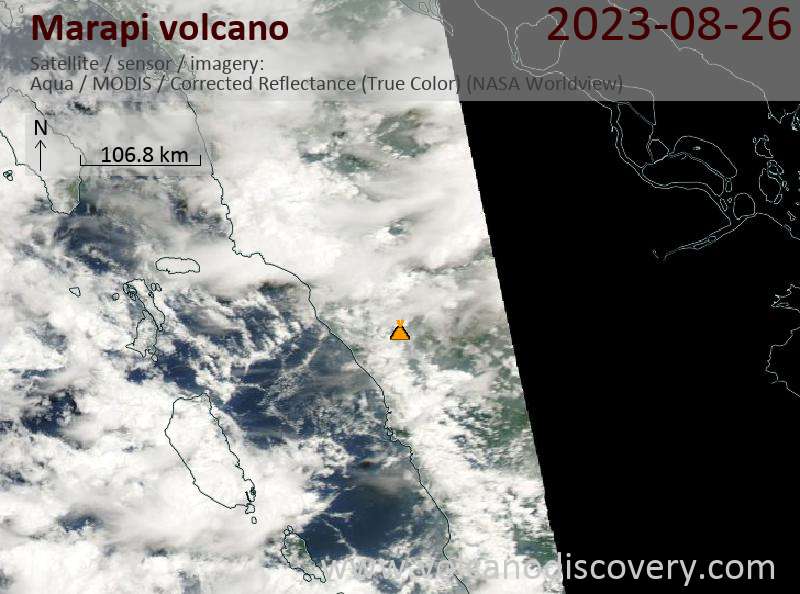 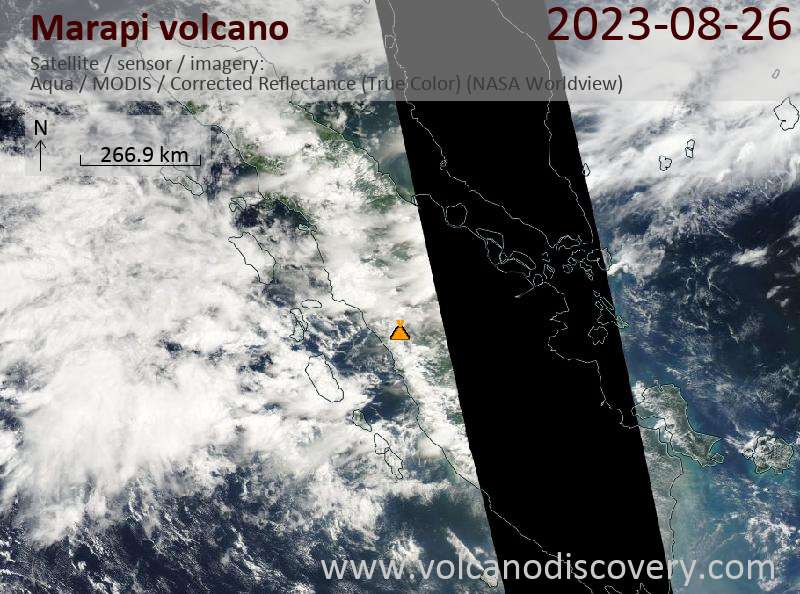 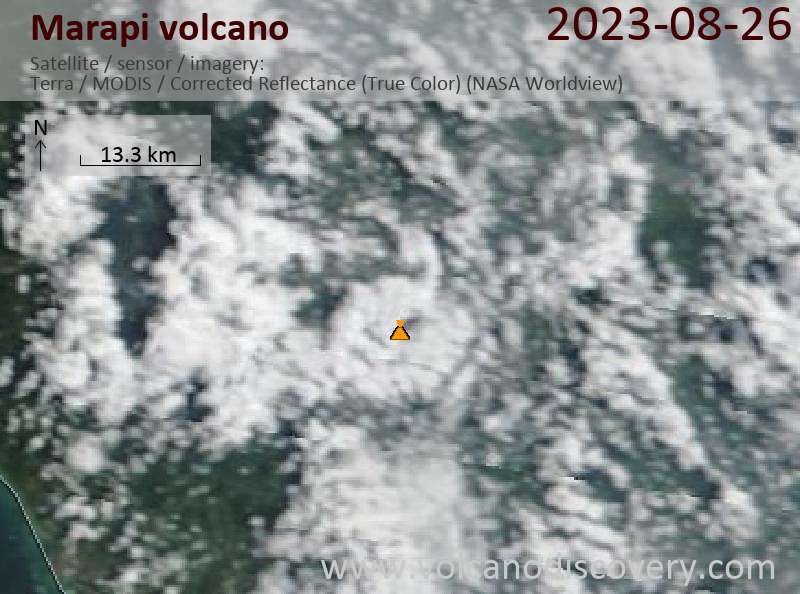 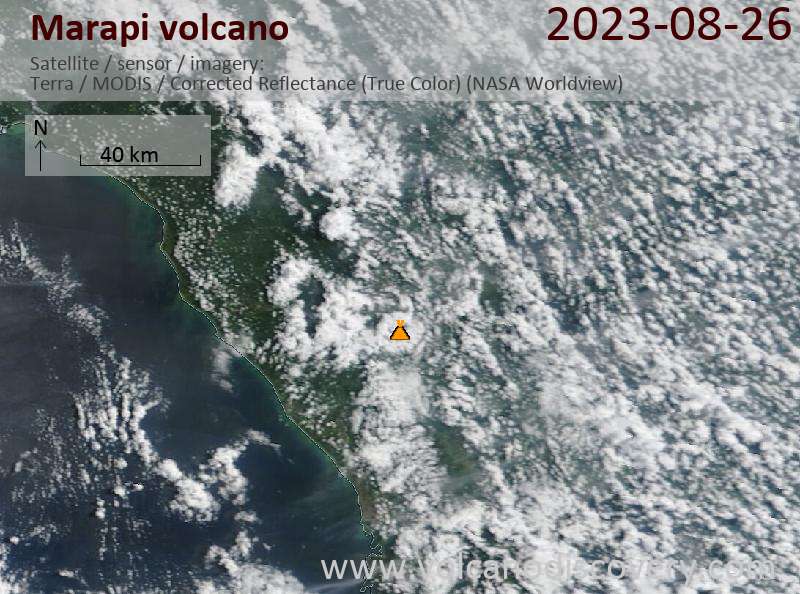 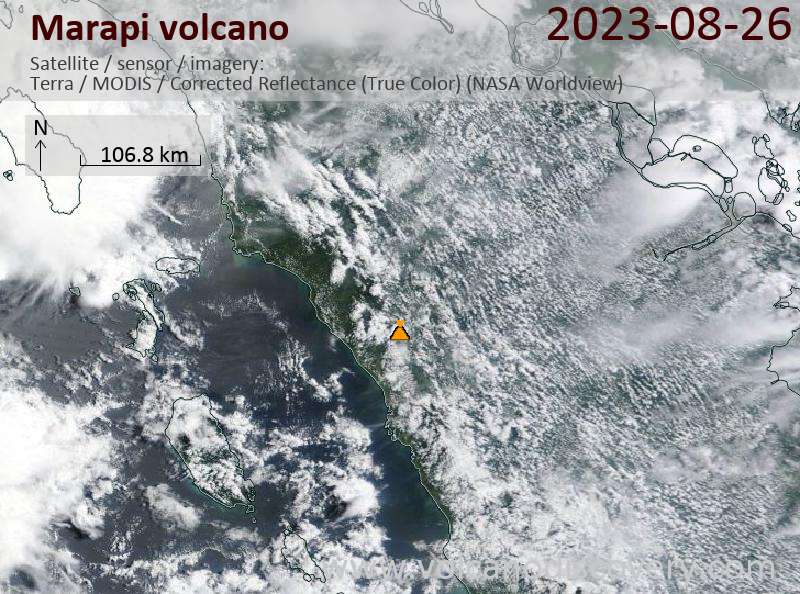 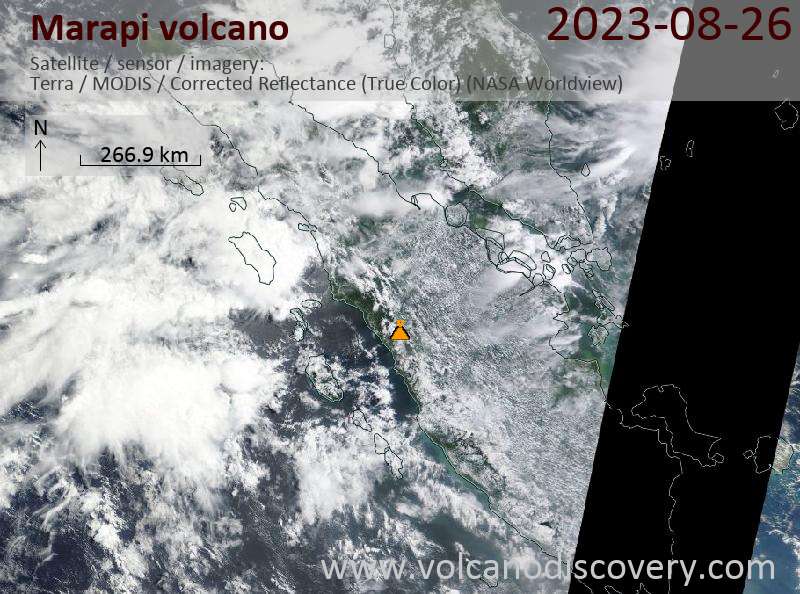 On 12th March 2000 an explosion from Marapi could be heard 25 km away and a black ash plume was erupted to a height of 3 km. Ash fell up to 350 km away N of Marapi. An eruption on about 23 April 2001 produced an ash cloud that rose up to 6 km and drifted to the E.
Marapi is a massive complex stratovolcano that rises 2000 m above the Bukittinggi plain in Sumatra's Padang Highlands. A broad summit contains multiple, partially overlapping craters constructed within the small 1.4-km-wide Bancah caldera. The summit craters are located along an ENE-WSW line, with volcanism migrating to the west.

More than 50 eruptions, typically consisting of small-to-moderate explosive activity, have been recorded since the end of the 18th century; no lava flows outside the summit craters have been reported in historical time.

Fatalities have been reported from eruptions in 1975, 1979 and 1992. On 30 April 1979, heavy rainfalls (300 mm of rainfall!) remobilized an old lahar and other volcanic material on Marapi's N and E flanks, producing several landslides. The largest began at 2,400 m altitude on 30 April, and traveled as much as 20 km downslope to ~70 m altitude, leaving a deposit 20-150 m wide and 1-3 m thick. 80 people were killed, five villages were damaged, and several acres of farmland were destroyed.

An explosion of Marapi Volcano on 5th July 1992 killed one person and injured five others.

Ubinas activity updates
The most frequently active volcano in Peru entered a new eruptive phase in 2014. Updates and news are regularly posted on this page.
Kamchatka

Kamchatka photos
A growing list of photo galleries taking during our expeditions in this fantastic part of the world, full of volcanoes, unspoiled nature and colors.
La Palma volcano

Eruption 2021 photos
Look at pictures from the spectacular volcanic eruption on La Palma Island during Sep-Oct 2021, sorted and annotated in chronological order!
Bárdarbunga

Raung volcano photos
One of the largest and most active volcanoes in East Java, rarely-visited and relatively unknown Raung became (in)famous during its recent eruption in 2015 when its frequent ash plumes forced the repeated closure of Bali's airport.
Get the ad-free version!
Why is there advertising on this site?
Support us - Help us upgrade our services!
We truly love working to bring you the latest volcano and earthquake data from around the world. Maintaining our website and our free apps does require, however, considerable time and resources.
We need financing to increase hard- and software capacity as well as support our editor team. We're aiming to achieve uninterrupted service wherever an earthquake or volcano eruption unfolds, and your donations can make it happen! Every donation will be highly appreciated. If you find the information useful and would like to support our team in integrating further features, write great content, and in upgrading our soft- and hardware, please make a donation (PayPal or Online credit card payment).