Tongariro volcano (New Zealand): alert level lowered back to green
Sun, 23 Aug 2015, 11:05
On 19 August GeoNet reported that activity at Tongariro's Te Maari Craters had declined significantly since the eruption in 2012, with data suggesting that unrest associated with the eruption was over. Read all
Tongariro volcano (New Zealand): small earthquakes
Tue, 6 Aug 2013, 07:27 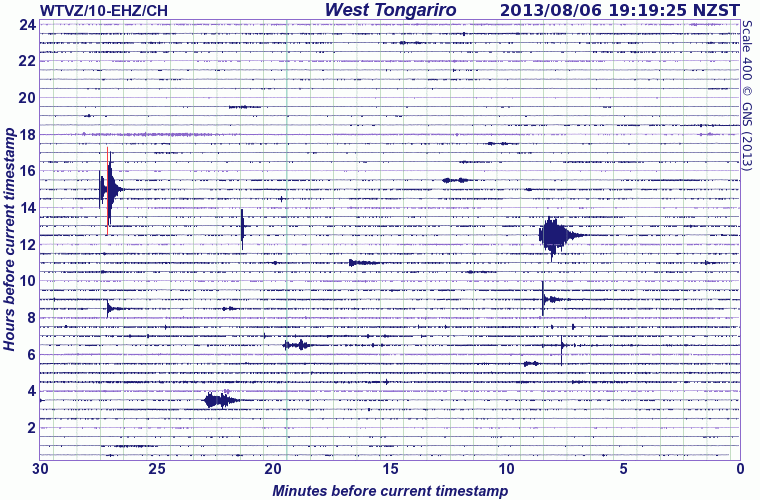 Current seismic recording from Tongariro (GeoNet)
During the past two weeks, GeoNet has been recording very small earthquakes beneath the volcano. The quakes were too small to be located but show up on local seismic stations. Read all
Show more
Tongariro volcano (North Island, New Zealand) activity update
Tue, 19 Feb 2013, 17:05 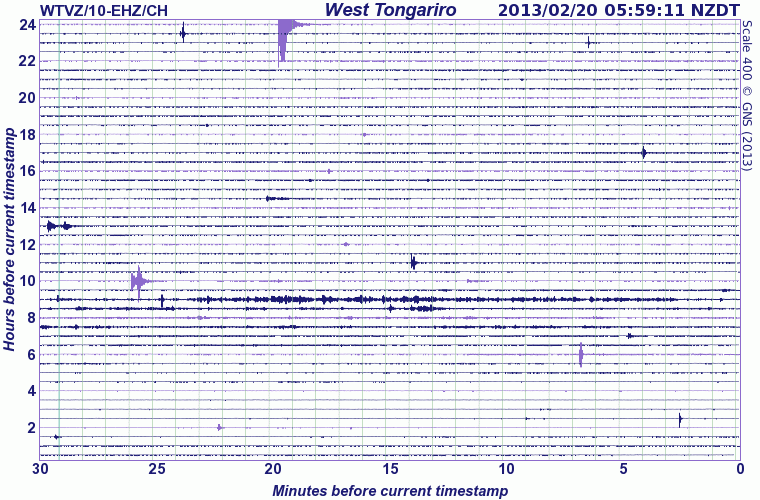 Current seismic signal at Tongariro (WT station, GeoNet)
An increased number of earthquakes and possibly a weak tremor pulses appear on today's seismic recording.
Tongariro volcano (North Island, New Zealand) activity update
Tue, 19 Feb 2013, 11:05
On 14 February GeoNet reported that Tongariro remained quiet with no eruptive activity being detected since the explosion on 21 November 2012. Steam-and-gas plumes rose from the Te Maari Craters, and were unusually strong during the recent weeks possibly due to weather conditions. The Aviation Colour Code remained at Yellow (second lowest on a 4 four-color scale) and the Volcanic Alert Level remained at 1 (on a scale of 0-5).
to top
Tongariro volcano (North Island, New Zealand) activity update
Thu, 31 Jan 2013, 07:21 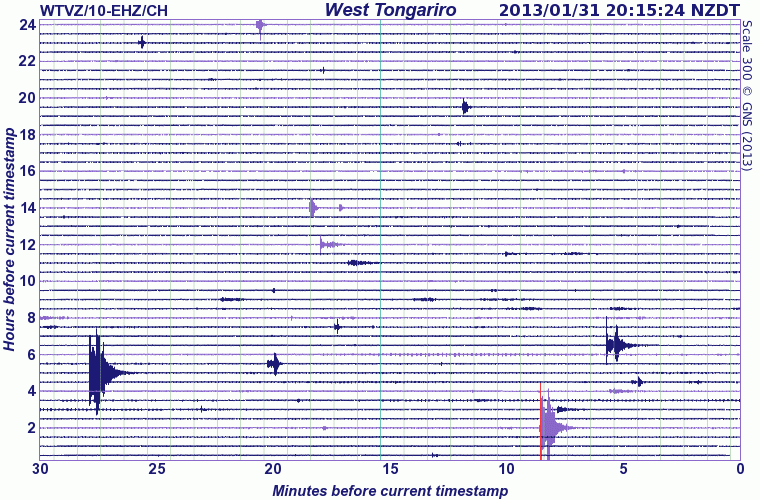 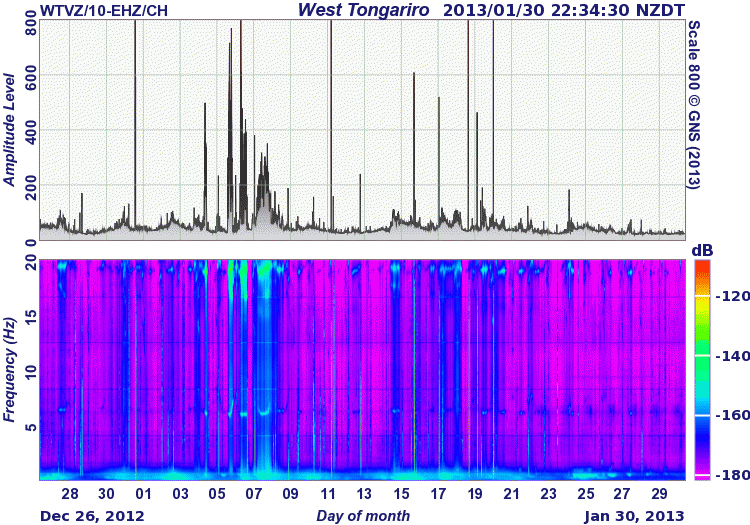 Tremor at Tongariro during the past 30 days (WT station, GeoNet)
Some small earthquakes have appeared again today, but generally, seismic activity has been showing a decreasing trend over the past weeks. 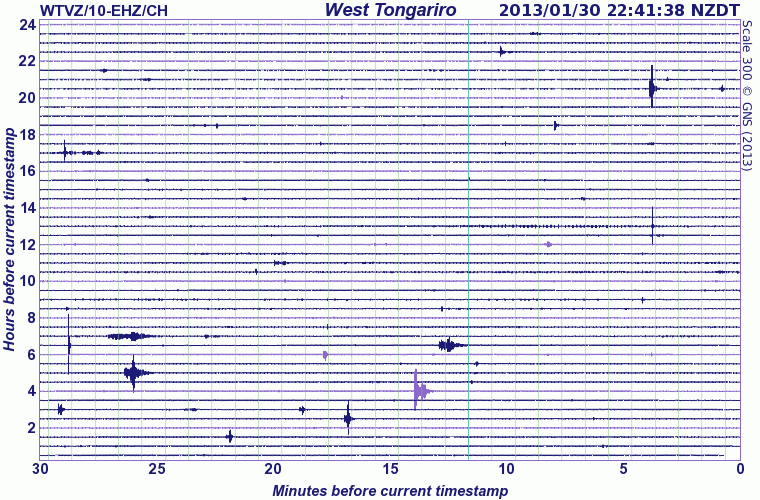 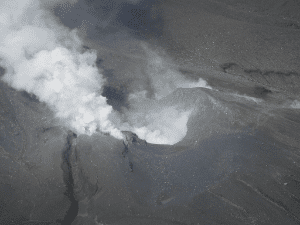 Picture of Upper Te Maari Crater looking south west. The main Upper Te Maari Crater is in the centre with the main gas discharge area to the left (east) at the head of the prominent fissure running to the base of the picture. (GeoNet)
Tongariro's current status remains characterized by strong degassing from the Te Maari craters, the site of eruptions in August and November 2012. At present, seismic activity is low. This activity is likely to go on several years, but Tongariro could produce new eruptions with little or no precursors, New Zealand's GNS writes in its recent update: Read all
Tongariro volcano (North Island, New Zealand) activity update: seismic unrest, volcanic quakes
Fri, 11 Jan 2013, 10:58 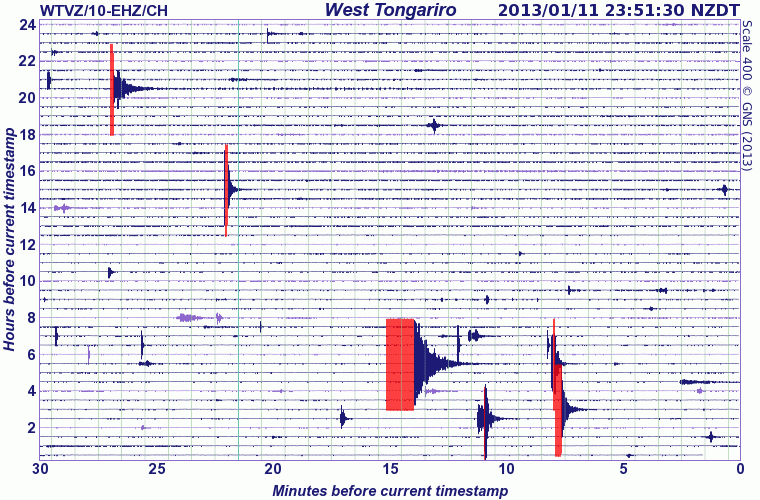 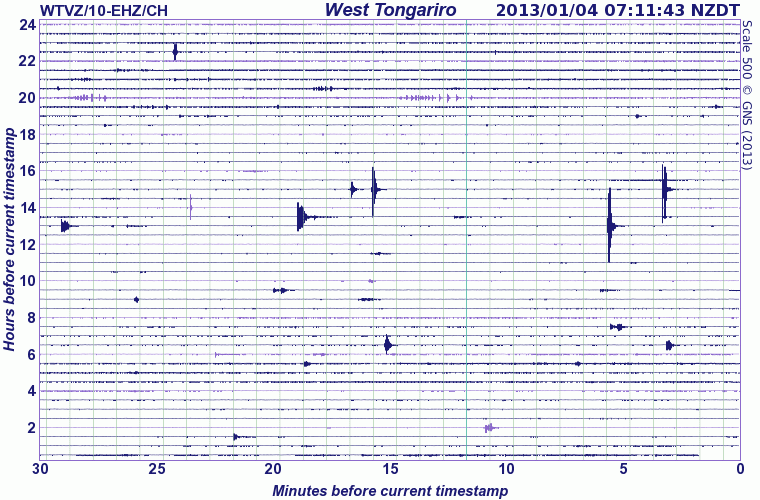 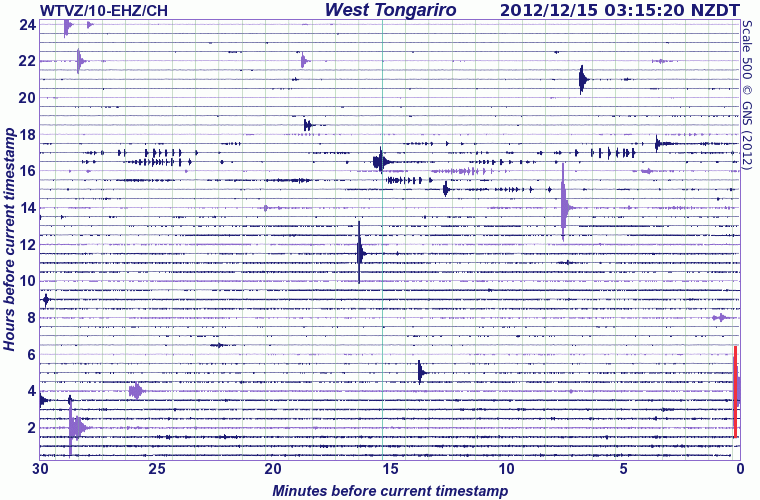 Current seismic signal from West Tongariro station (GeoNet)
Small earthquakes continue at the volcano.
Show more
Juvenile magma detected in latest Tongariro eruption
Mon, 26 Nov 2012, 09:53
The GeoNet reported on Facebook that ejecta from the November 21 eruption has been analysed and that 1% of the ejected material was fresh magma. Read all
New brief eruption from Tongariro volcano, New Zealand
Wed, 21 Nov 2012, 08:11 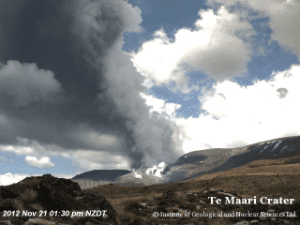 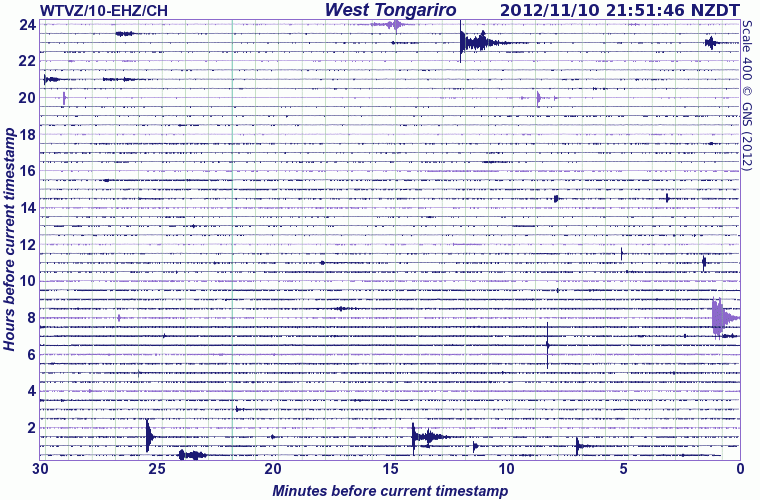 Current seismic signal from West Tongariro station (GeoNet)
Compared to most previous weeks and months, seismic activity at the volcano has been calm the past days. 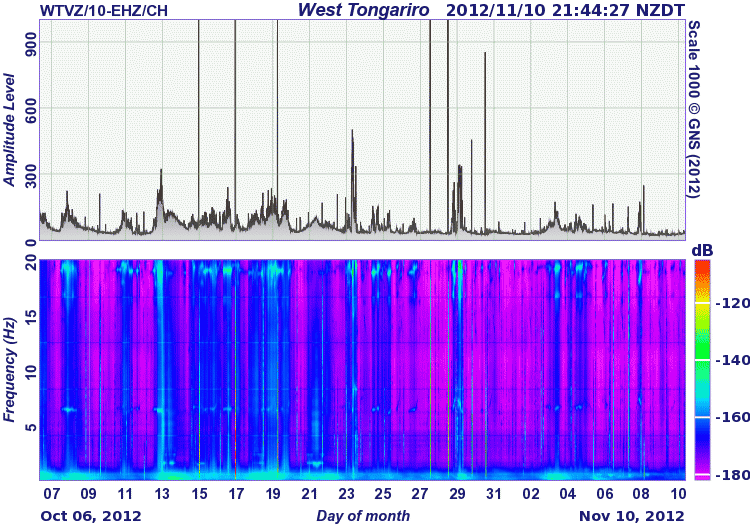 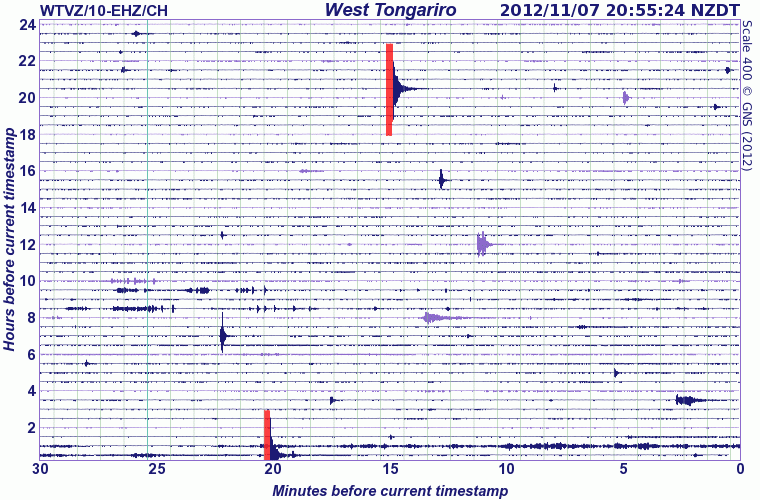 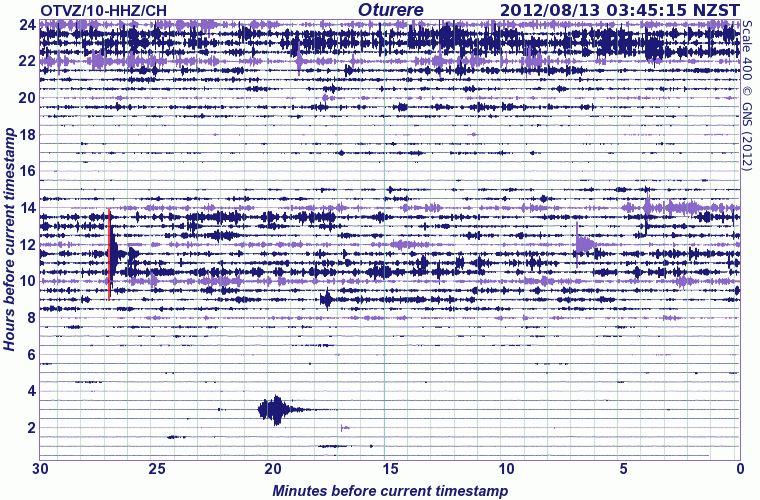 Seismic signal from Tongariro volcano (12 Aug 12)
GeoNet reports little new activity from Tongariro. Seismicity from the volcano has remained low. It is noted that most of the activity visible on the seismograph drums is caused by wind.
Tongariro calm for the moment, gas measurements suggest magma presence underneath
Fri, 10 Aug 2012, 08:57
Tongariro volcano (New Zealand) update: scientists make overflight of the 6 Aug eruption area
Wed, 8 Aug 2012, 05:24
This morning, NZ scientists could use a brief window of clear weather to make an overflight of the eruption area which was found to be just below the Upper Te Mari crater, where new steam vents were observed. At the moment, Tongariro is calm, but eruptions could resume any time.
to top
Show more
Tongariro volcano (New Zealand), eruption update: facts about yesterday's eruption summarized
Tue, 7 Aug 2012, 11:07
- The eruption started at 11:52 PM (NZ time) and lasted about 30 minutes. Read all
Mt. Tongariro erupts for the first time since 1897
Mon, 6 Aug 2012, 22:16
We got great news from our friend and team member Luca Montagni from New Zealand, reporting that Mt. Tongariro volcano has been erupted 11:50 p.m. in the night of Monday/Tuesday 7-8 August. Due to the bad weather there are no visible observations possible that moment.
Tongariro volcano (North Island, New Zealand) activity update: tremor and earthquakes continue
Sat, 4 Aug 2012, 09:21

Seismic signal at Tongariro volcano 4 Aug (GeoNet)
Seismic unrest continues with tremor and earthquakes visible on the seismic recordings for Tongariro. No new reports from GeoNet in New Zealand, but the alert level remains at 1. 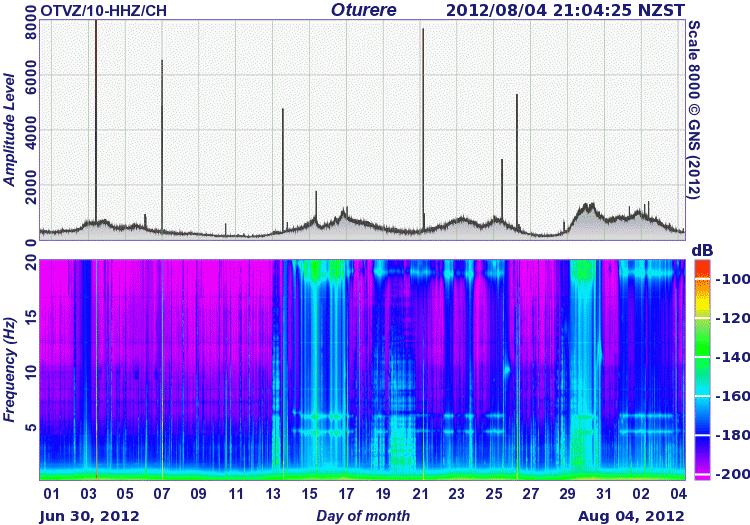 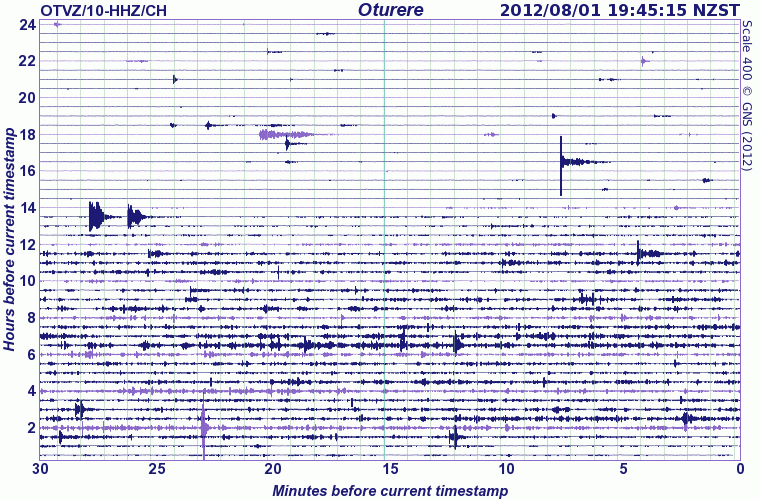 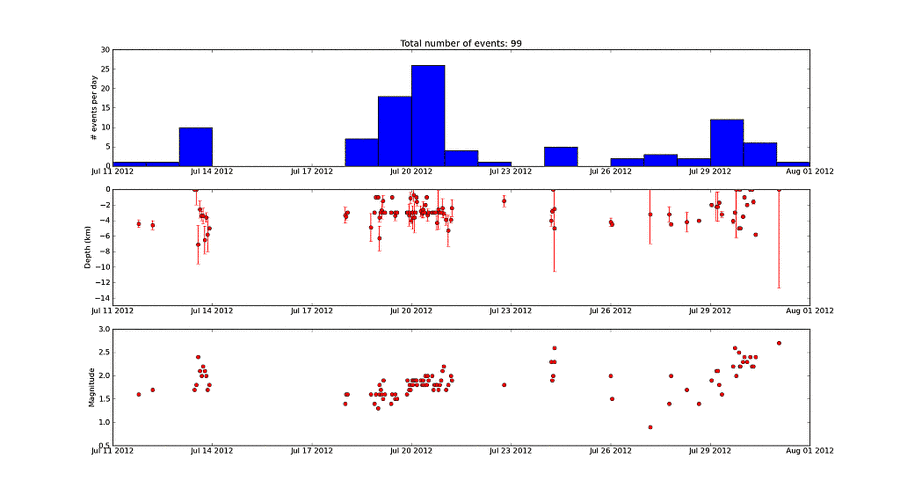 Recent earthquakes at Tongariro (GeoNet)
Sesimic activity has picked up under Tongariro volcano in New Zealand, GeoNet confirms in its latest bulletin. The earthquake activity had started on 13 July, peaked on 20 July, sharply decreased and picked up again with currently about 3-10 events per day. The earthquakes cluster in a zone between Mount Tongariro and the eastern side of Lake Rotoaira at 2-7 km depth. They are mostly very small and unlikely to be felt. Read all
Tongariro volcano (North Island, New Zealand) activity update: increased seismicity
Mon, 30 Jul 2012, 10:05 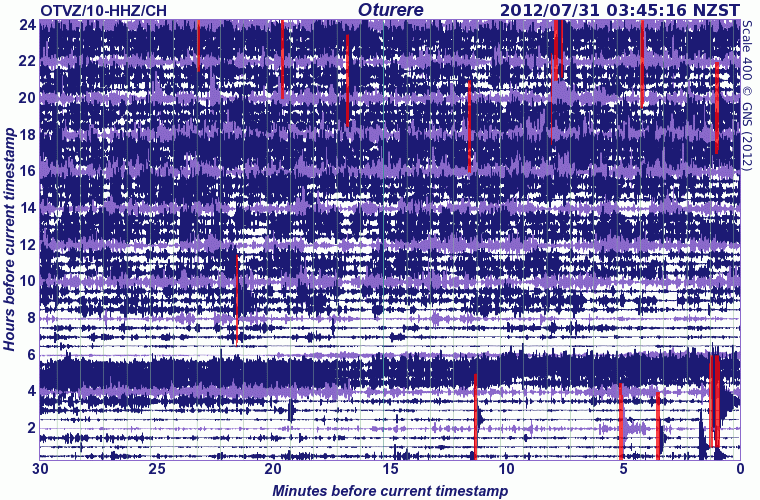 Seismic signal at Tongariro volcano 30 July (GeoNet)
A lot of seismic activity appears on the seismograph visible at Tongariro. There are no new reports by Geonet, and the status remains at yellow (1 out of 4).
Tongariro volcano (North Island, New Zealand) activity update: weak seismic unrest, alert still at level 1
Fri, 27 Jul 2012, 10:03 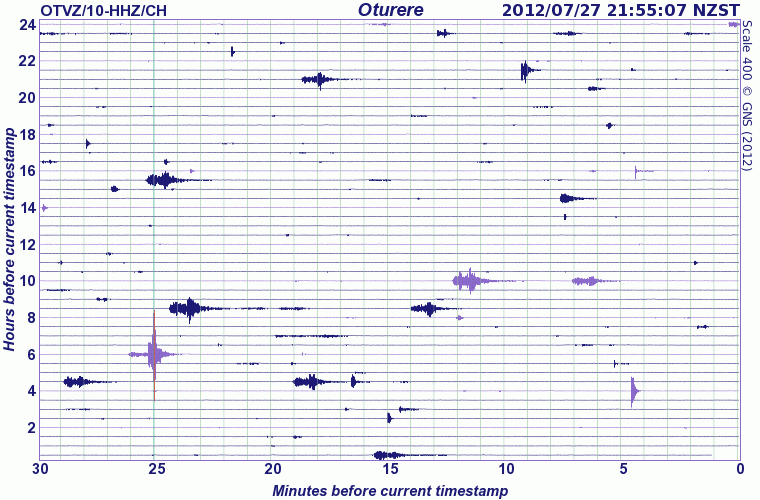 Seismic signal at Tongariro volcano (GeoNet)
Mt. Tongariro volcano remains seismically active, but less than before. There are no further news from GNS science, but the alert level remains at 1.
Tongariro volcano (New Zealand): seismic swarm, a possible precursor to new activity
Mon, 23 Jul 2012, 10:05
Tongariro volcano is showing signs of a possible awakening. On 13 July 2012, an increase in small (<M2.5) earthquakes was detected. The quakes were clustered at depths of 2-7 km under the area between Emerald crater and Te Mari crater. Read all
to top
First visit to our site? If you havn't done it yet, download the Volcanoes & Earthquakes app to get one of the fastest volcano news online:
Android | IOS

Recent volcano satellite images
Browse quickly through the latest satellite imagery from volcanoes all over the world in order to spot ash clouds and hot spots.
Quakes Felt

Volcano and photo tour to Java, Indonesia
Visit Java's famous volcanoes: Krakatau, Merapi, Bromo, Semeru, Ijen and others, crossing Java from west to east. This study and photography trip for a small exclusive group is one of our classic and best tours.
Katla Earthquakes

Latest quakes at Katla volcano
One of Iceland's most active and dangerous volcanoes is showing signs of unrest and statistically due for a new eruption. Earthquakes could give a clue.
Colima