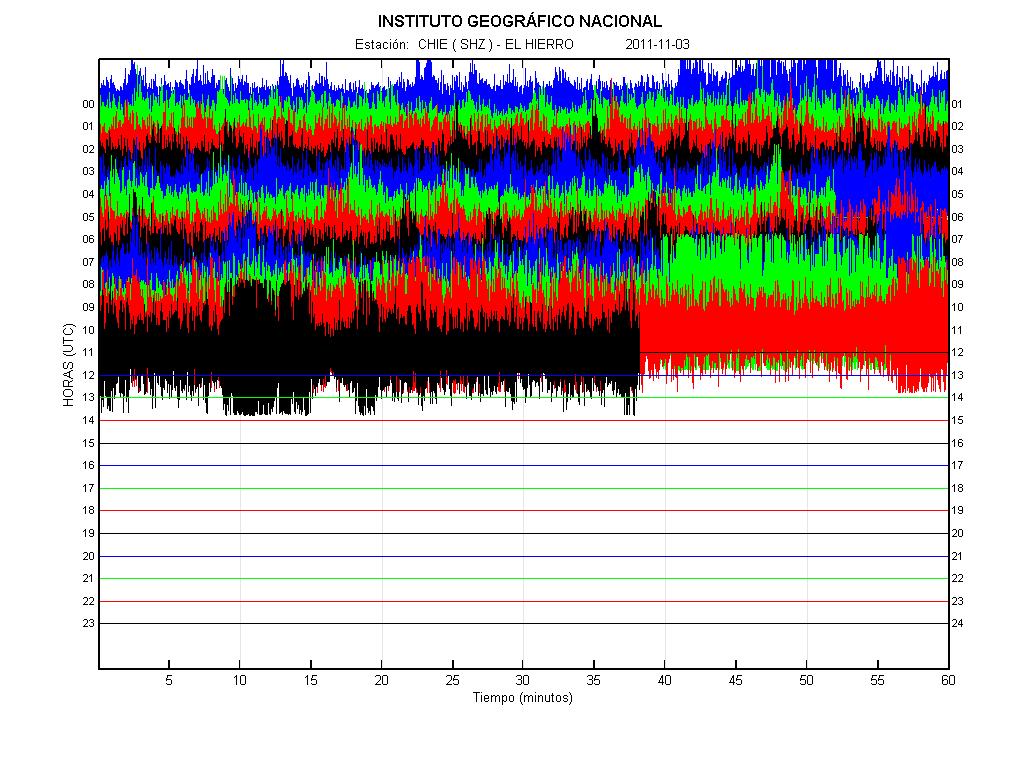 Increasing tremor signal (3 Nov 2011) at El Hierro
Seismic activity beneath the El Golfo region has further increased and there is now a strong tremor signal. This suggests that a second submarine vent might in fact have started to erupt.
---
Links / Sources:

Tue, 1 Nov 2011, 12:40
12:40 PM |
The seismic activity off the NW coast of El Hierro under the El Golfo area is intensifying and near the same levels immediately before the ongoing submarine eruption south of the island.
Yesterday alone 153 quakes were measured with magnitudes of up to 3.9. Most quakes are still at safe 20 km depth and not related to the opening of eruptive vents on the sea floor. At the same time volcanic tremor (a low-frequency seismic wave component typical of magma movements) has been slightly increasing and the is now little doubt that magma is moving beneath the island. At this stage, it seems not unlikely if a new intrusion makes its way to the seafloor, starting a new submarine eruption form a second vent in the near future.

A video on youtube was reported to show green water discoloration in the area and there are voices that an eruption could already have started. This seems unlikely and could not be confirmed. Such water discoloration is probably caused by drifting currents carrying mud coming from the ongoing submarine eruption south of the island.
---
Links / Sources:

Sat, 29 Oct 2011, 15:25
15:25 PM |
While the submarine eruption south of El Hierro Island continues, a large number of mostly deep (around 20km) earthquakes of up to 3.3 magnitude have been occurring in the gulf off the NW coast of this island.
Yesterday, IGN listed 63 earthquakes, 4 above or equal to 3, 27 in between 2 and 3 and 32 lower than 2. The strongest was a M3.3 quake at 14:16 UTC. Today, Saturday IGN has listed already 32 earthquake, the vast majority with epicenter in the El Golfo area. The tremor of 10:46 UTC this morning was the strongest at M 3.3.
It is likely that this is related to magma movements at depth, but at present not a sign that another eruption or a major change in the eruption style could be in the making. However, the situation clearly needs to be followed carefully.
---
Links / Sources: 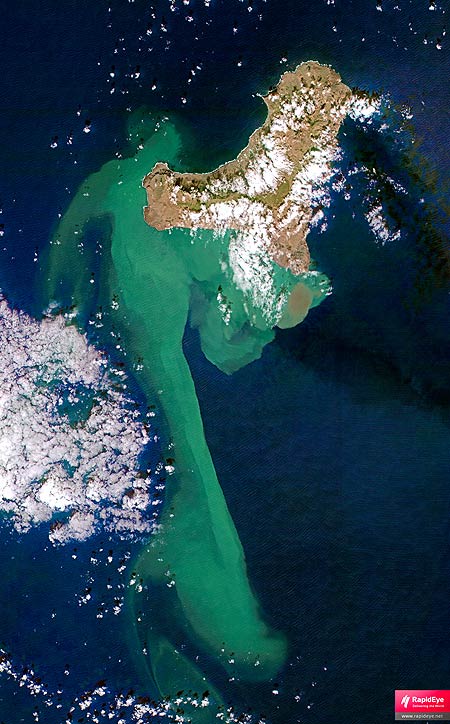 A true color, high-resolution RapidEye satellite image taken on 26 Oct featuring the gigantic stain visible on the surface of Las Calmas Sea, and even the vent area visible as the brown spot near the southern tip of the island. Image courtesy and copyright RapidEye.net 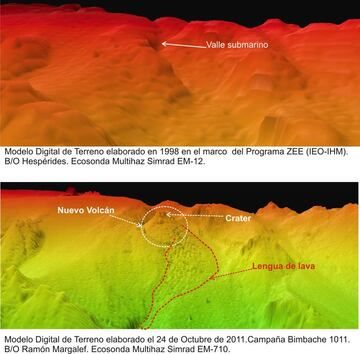 Digial elevation models presented by IEO showing the vent area before (a) the eruption and at present (b), with the new crater and even what is likely submarine lava flows. Images: Instituto Español de Oceanografía (IEO)
The Spanish research vessel Ramon Margalef has surveyed the vent area of the new ongoing submarine eruption south of El Hierro with the help of a diving robot, and presented a digital model for the news crater, which formed above an undersea valley at 250 m depth and forms a cone rising now more than 100 m containing a 120 m wide crater. Even submarine (pillow) lava flows are recognized on the elevation model presented. If the pictures presented by IEO really are showing the new volcano, it is the first time that the birth of a seamount has been documented this way.
In the meanwhile, the eruption continues and produces a large stain of discolored muddy water drifting around the southern and western coast of El Hierro.
---
Links / Sources:

VolcanoDiscovery teams up with Earthquake Report.com

We have teamed up with the people from Eartquake Report. Created by Armand Vervaeck (Belgium), Earthquake Report has quickyl grown to be the best independent earthquake reporting site in the world. It provides timely information and background about ongoing seismic crises, volcanic eruptions and more. ... Read all
Show more
Sat, 26 Mar 2011, 09:36

You can now follow news about volcanoes worldwide and our own activities through our RSS news feed, making lookup times much faster, since you do not have to load the whole website. ... Read all
Fri, 29 Oct 2010, 05:12

VolcanoDiscovery is in Denver at the Geological Society of America conference from October 31-November 3, 2010! Come see us in the Exhibit Hall at the Convention Center if you're in the area -- contact us at hawaii@volcanodiscovery.com or 1-808-640-4165 for a FREE ENTRY PASS! Hawai'i guide & volcanologist Philip will be on hand to answer questions about our world-wide tours and special educational rates! Find us in booth #1039 next to the GSA Foundation and Exhibitor Lounge, beyond Paleo Alley! ... Read all
Show more
Sun, 8 Aug 2010, 07:47

We're in the progress of making improvements and updates to the design and some internal functionality of our website. For a while, some features might still look odd, but we're working hard on it. ... Read all
Fri, 19 Mar 2010, 16:13

We are happy to announce that visiting Nyiragongo is now again possible. With the help of EU money, the Virunga National Park has been reorganized and now open again, after a long pause due to the civil war. Read all
Thu, 21 Jan 2010, 09:17

26.2.: Presentation about the Greek island Santorini in Heidelberg 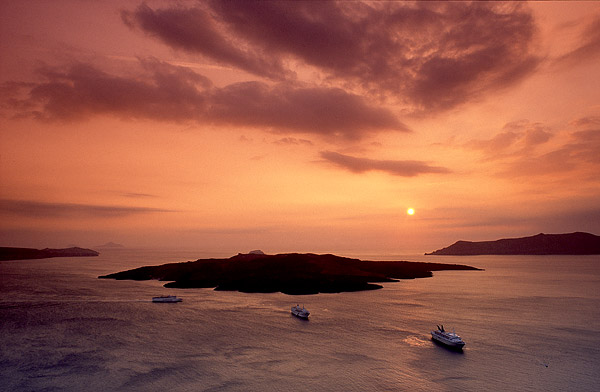 On February 26th our VOLCANODISCOVERY Team member Tobias Schorr will do a presentation about the Greek volcanic island of Santorini in Heidelberg. ... Read all
Watch Volcanoes Live 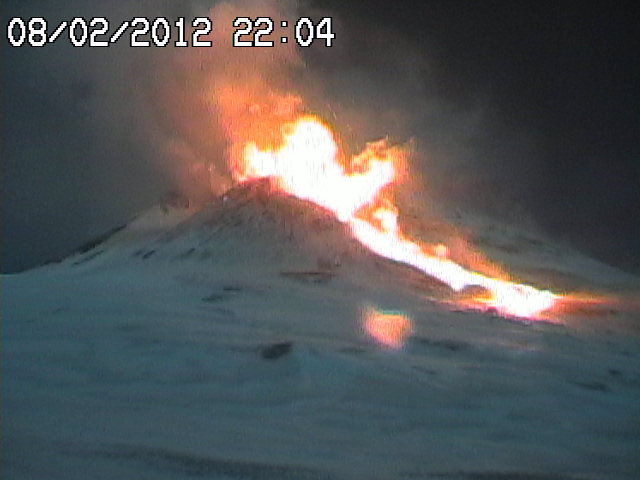 Ijen volcano photos
Ijen volcano in East Java is famous for its turquoise acid crater lake and the large sulfur deposits that are being mined by local workers. At night, the scene is illuminated by ghostly blue flames, as sulfur ignites.
Vanuatu

Photos from Vanuatu
A fascinating archipelago with very active volcanoes, tropical islands and very friendly and hospital people who still live their original Melanesian culture. Browse through our vast collection of photos.
Volcanoes of Iceland

Infos + news about volcanic activity in Iceland
Hekla, Katla, Krafla, Askja, Eyafjallajökull, Heimaey, Surtsey are famous names of active volcanoes, but there are many more in Iceland.
Merapi

Merapi volcano photos
One of the most active and most dangerous volcanoes of Indonesia: Merapi meaning "the one who makes fire", is a feared but also venerated holy mountain looming over the city of Yogyakarta, capital of Central Java.
Get the ad-free version!
Why is there advertising on this site?