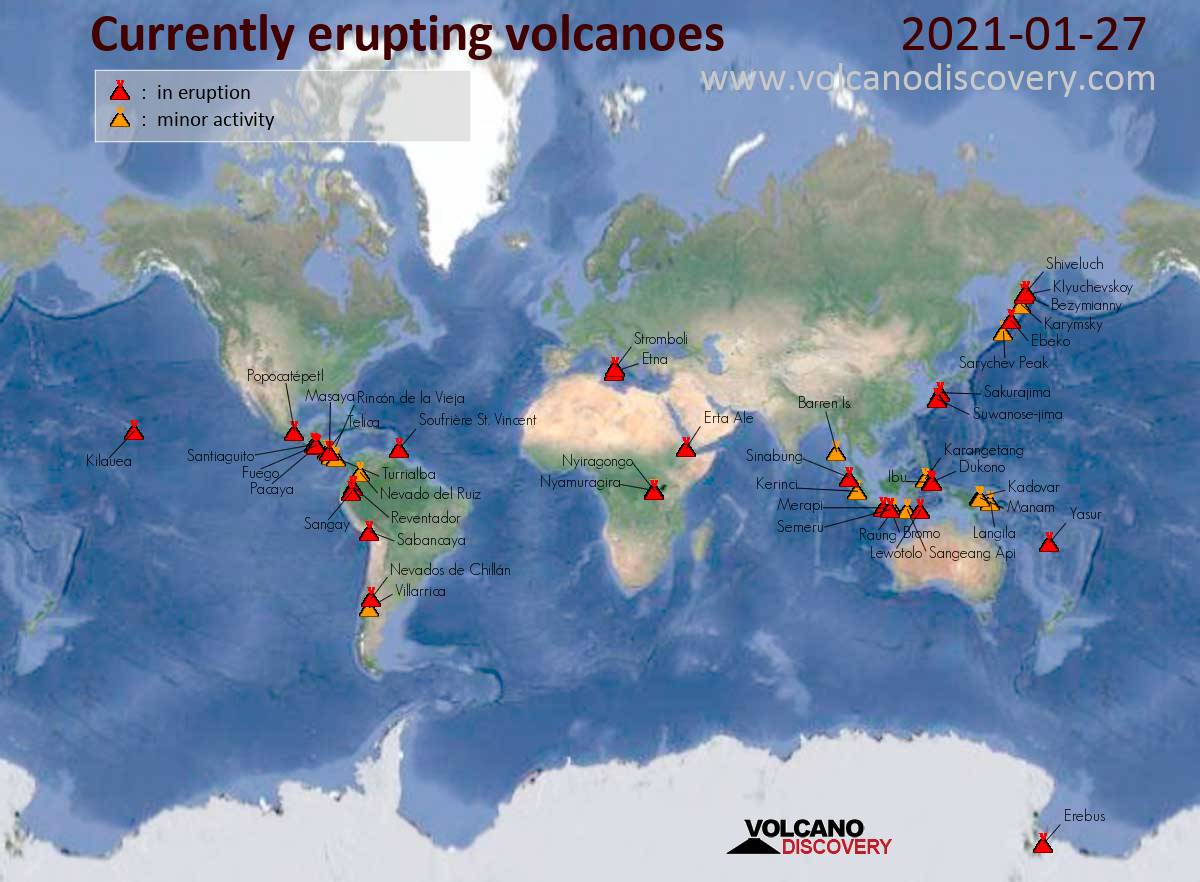 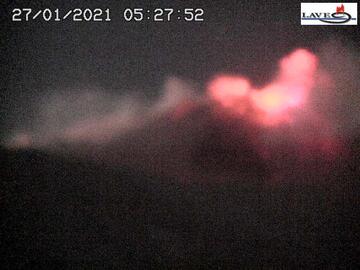 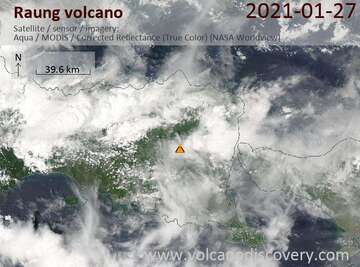 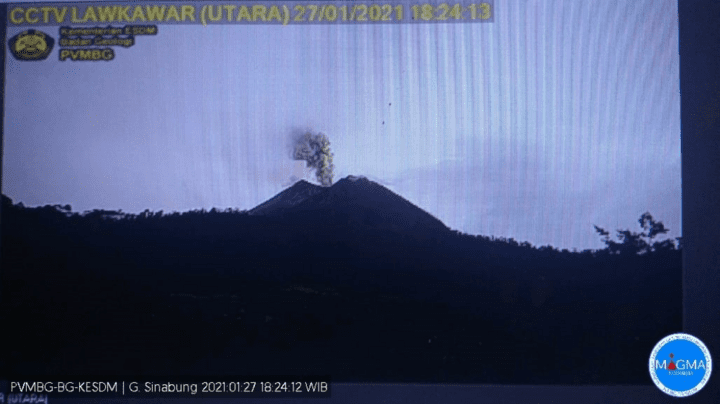 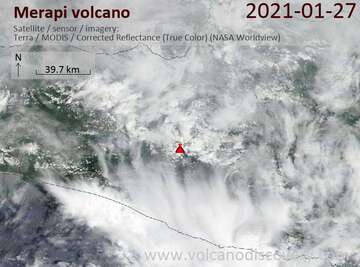 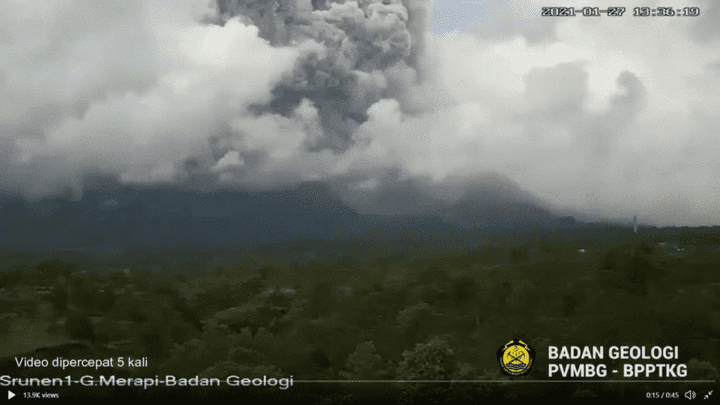 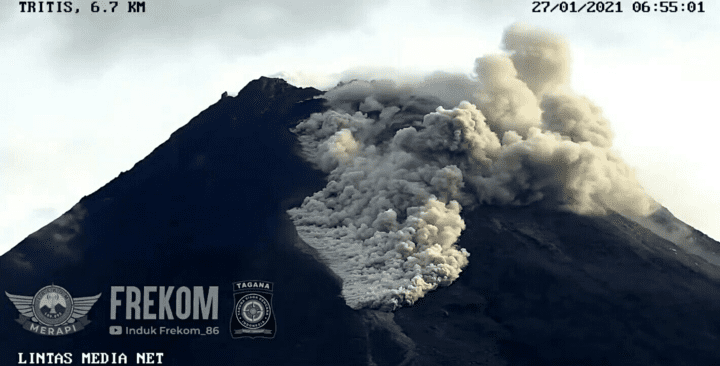 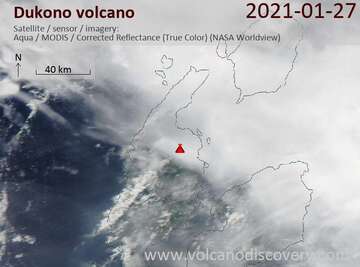 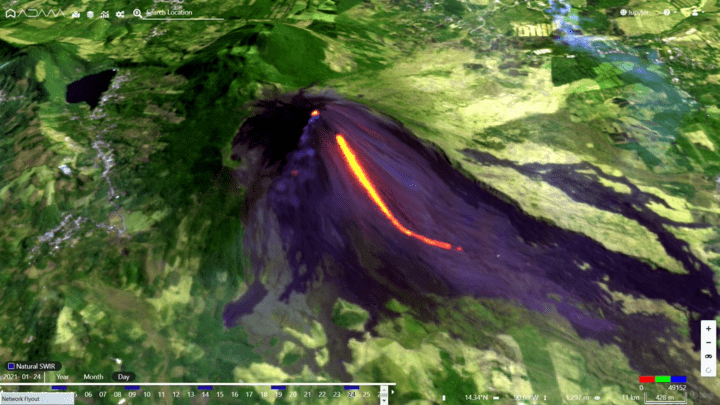 The lava flow on the SW slope remains active accompanied with continuous plume from the summit crater (image: @tonyveco/twitter)
Etna (Sicily, Italy): (27 Jan) Europe's most active volcano remains highly active, erupting from at least two of its summit craters: although visibility has been very poor, intermittent clear views allow to see intense strombolian-type activity from the New SE crater and the Voragine central crater.
The latter is less frequent and not as strong as the activity at the protagonist New SE crater. Tremor has been high and showing a steady increasing trend, indicating that magma is currently flowing towards the surface at increased rate.
Whether there will be another paroxysm with lava fountains soon is open to speculation at the moment.

... [read more]... [show less]
The warning bulletin states that ballistic impacts of volcanic bombs and pyroclastic flows could affect an area of about 3 km distance from the main crater and 5 km on the SE flank and 4 km on the NE flank.
The Volcanic Alert Level remains at Orange.


Merapi (Central Java, Indonesia): Explosive activity continues. Volcanic Ash Advisory Center (VAAC) Darwin warned about a volcanic ash plume that rose up to estimated 12000 ft (3700 m) altitude or flight level 120 and is moving at 10 kts in E direction.
The full report is as follows: LOCALISED VA EMISSION TO FL120 OBS VA DTG:27/1840Z to 12000 ft (3700 m)
...27 Jan:
The phase of intense effusive activity of the volcano, that had started this morning, continues at elevated levels accompanied by stronger pyroclastic flows than the previous.
Surveillance cameras of volcanological observatory BPPTKG observed a massive pyroclastic flow at about 13:30 local time today that generated a dense dark ash plumes (so-called phoenix clouds) as can be seen in the attached video recorded below. The height of the ash plume is unknown and was not reported as visibility was very limited due to dense clouds. According to BPPTKG the glowing avalanches reached at about 3 km distance from the summit.
... [read more]... [show less]
Gravitational collapse of the growing lava dome parts continues to generate the block-and-ash flows that descended the SW flank of the volcano in Kali Krasak and Kali Boyong direction.

...27 Jan:
The extrusive eruption of the volcano continues at elevated levels.
A series of strong pyroclastic flows were released from the actively growing lava dome in the inner summit crater this morning at about 06:00 local time. Gravitational collapse of the lava dome parts generated the block-and-ash flows that descended the SW flank of the volcano. Glowing avalanches reached 800 m-1200 m in the Kali Krasak drainage and lasted approx. 83-122 seconds.
... [read more]... [show less]
Ash plumes separating from the pyroclastic density current (so-called phoenix clouds) extended about 1200 m to the southwest of the volcano. Pyroclastic flow is volcanic phenomenon includes turbulent and hot avalanches of hot lava rocks, ash and volcanic gasses mixed together.
Strong pyroclastic flow from Merapi's lava dome:

Pacaya (Guatemala): The effusive-explosive eruption of the volcano continues.
The lava flow on the southwest flank continues to effuse at moderate rate, keeping the flow active with the length currently about 1,700 m.
... [read more]... [show less]
Collapsing parts of the flow generated a small avalanche that lifted ash plumes as it descended the slope.
Strombolian activity is in progress and continues from the Mackenney summit crater. The latest Volcanic Ash Advisory Center (VAAC) Washington update reported a grey-to-brownish ash plume that reached up to 11,000 ft (3,400 m) altitude and extended about 4 km to the west of the volcano. 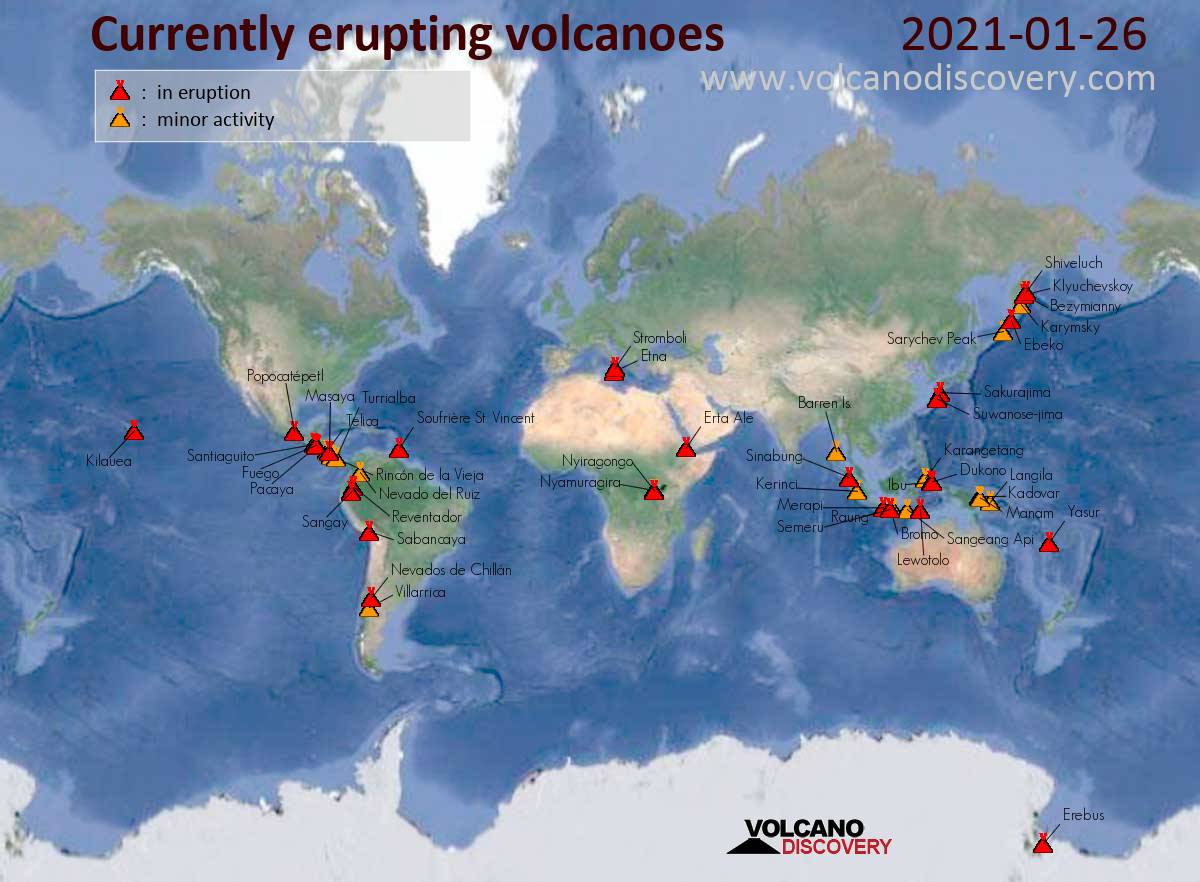 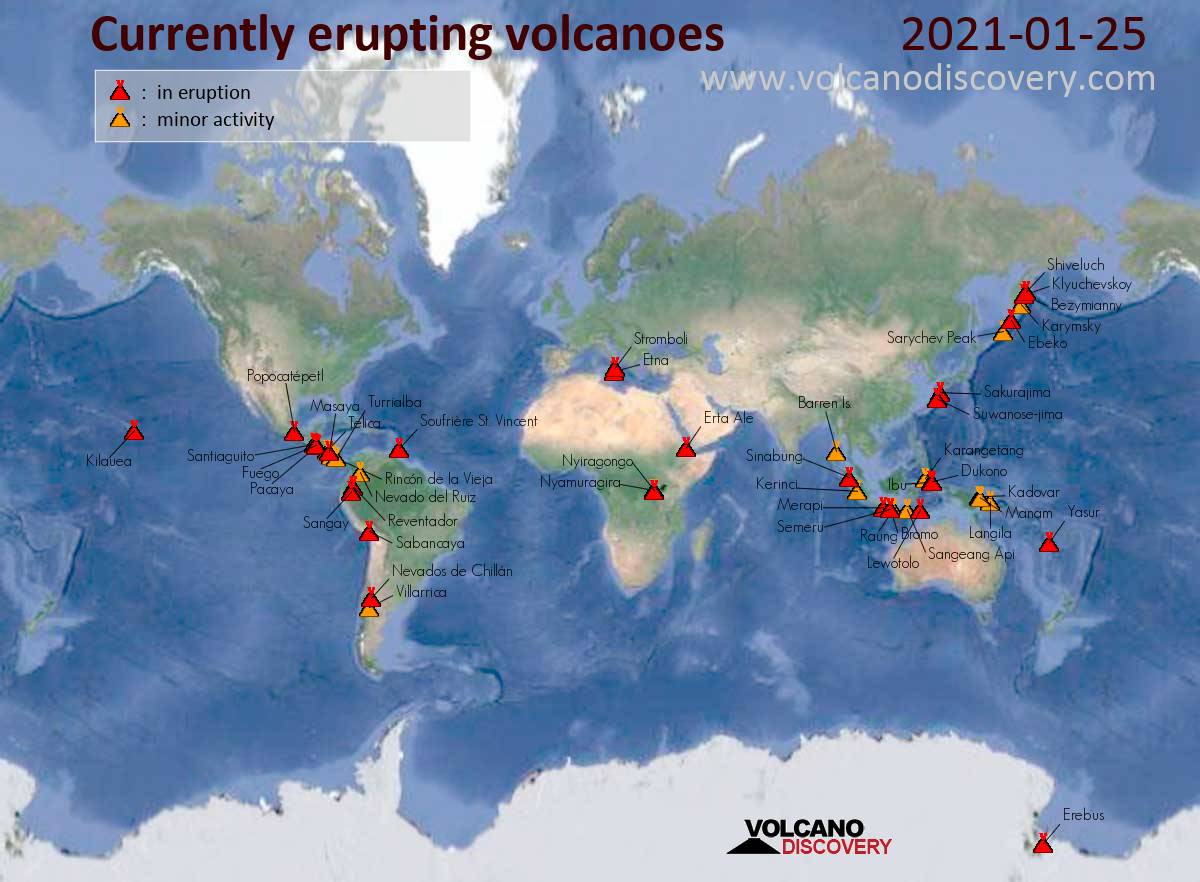 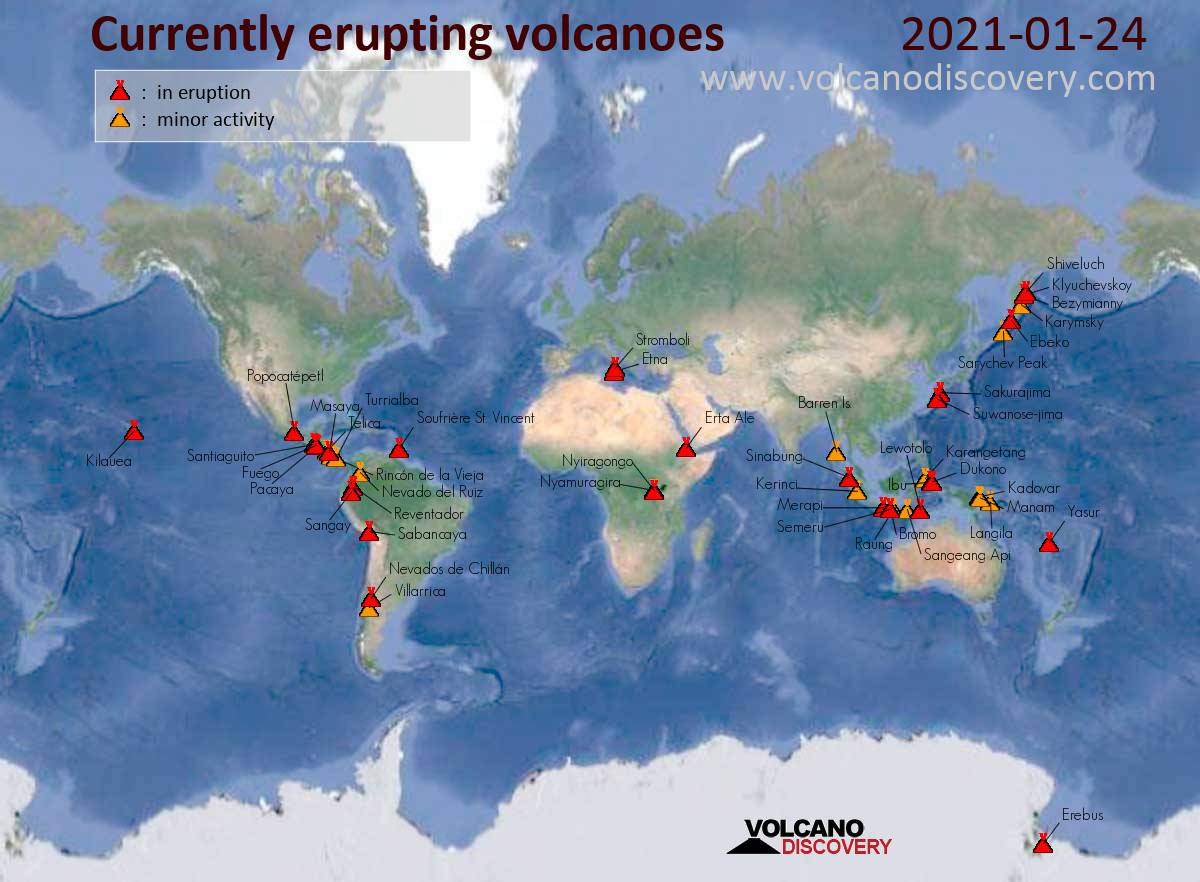 Stromboli (Eolian Islands, Italy): Friday's lava flow on the Sciara del Fuoco did not stay active very long as the effusive activity from the base of the NE vent that had fed the flow dropped again. ... Read all
Sat, 23 Jan 2021, 21:00
Volcanic activity worldwide 23 Jan 2021: Pacaya volcano, Klyuchevskoy, Popocatépetl, Shiveluch, Rev... 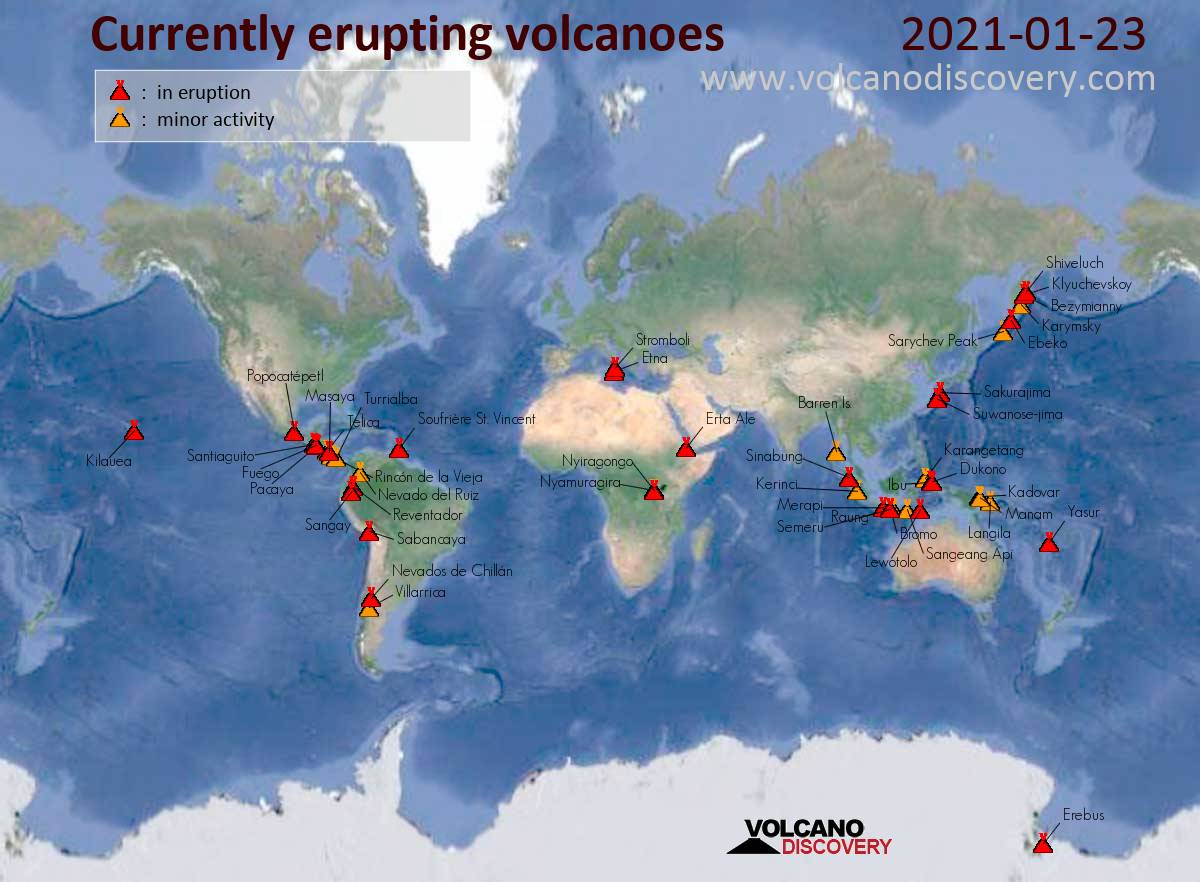 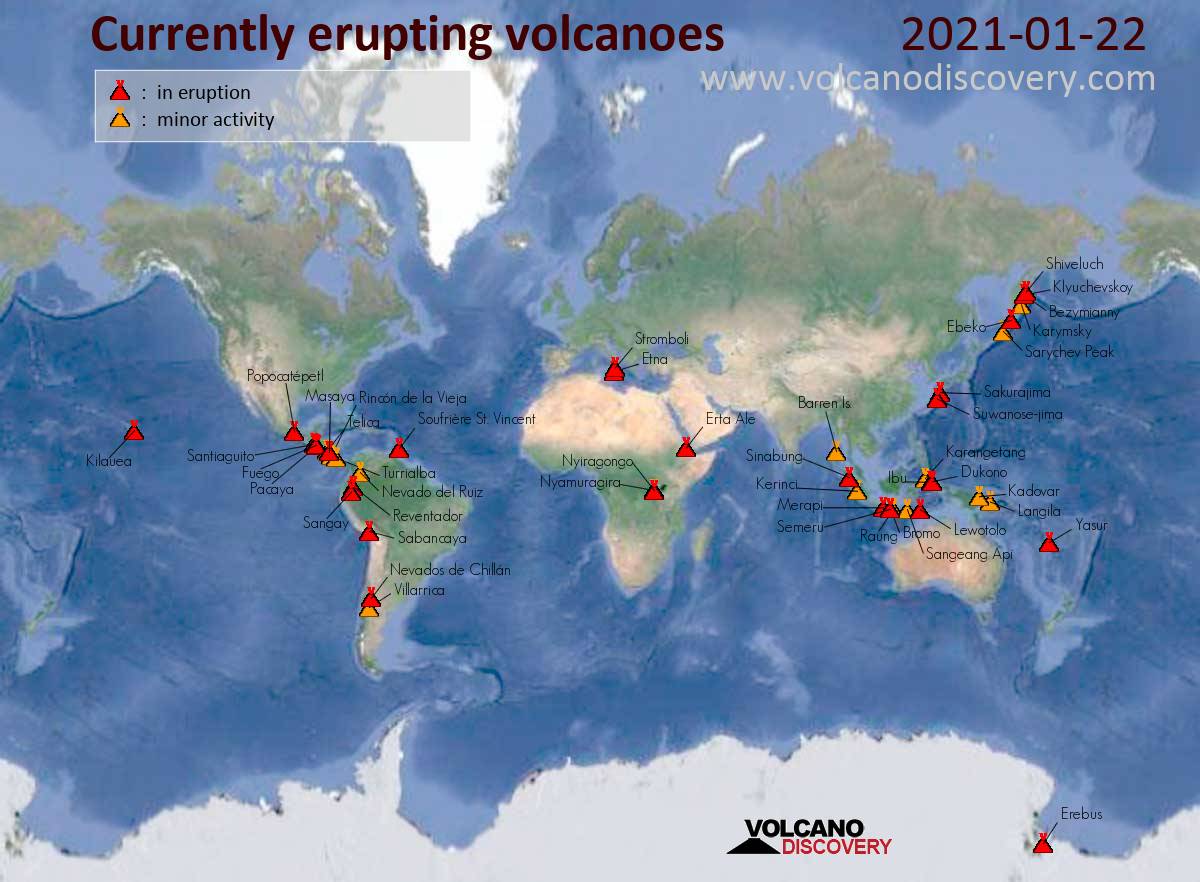 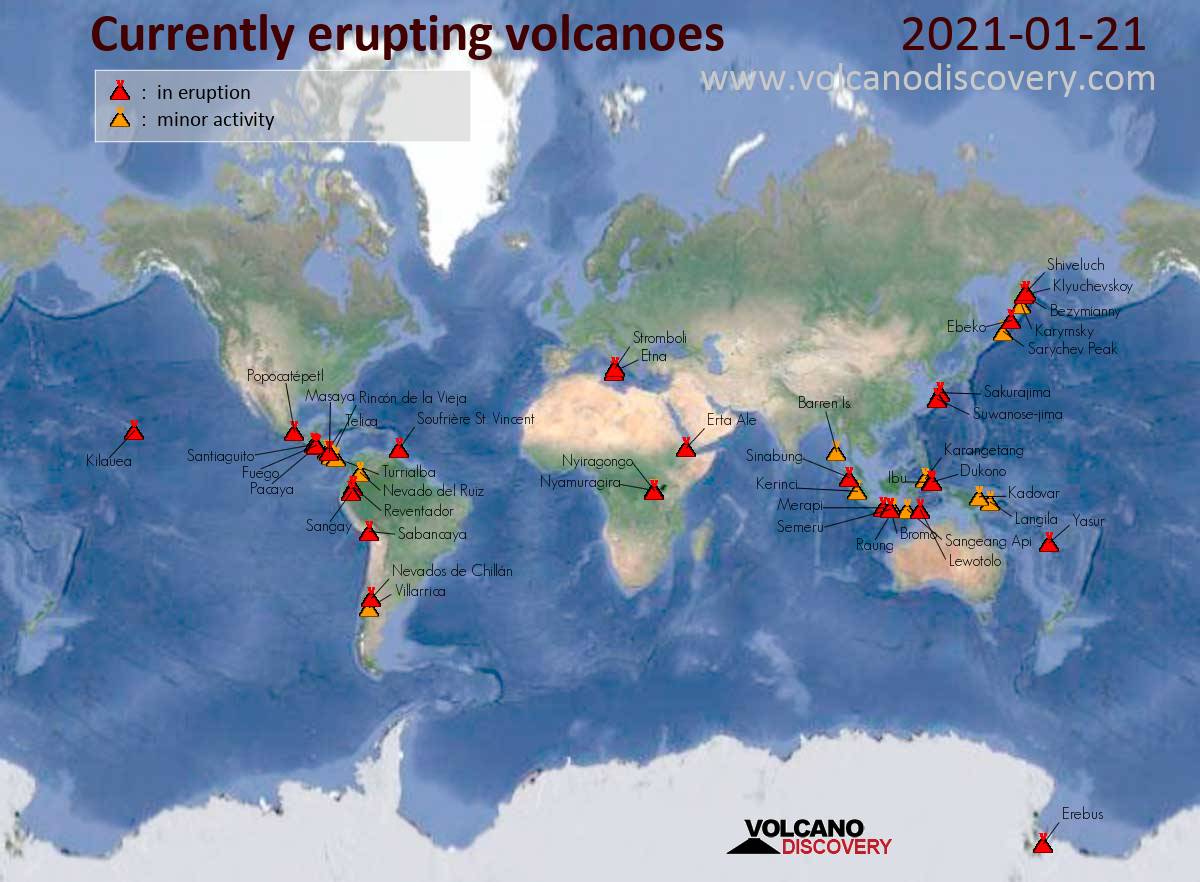 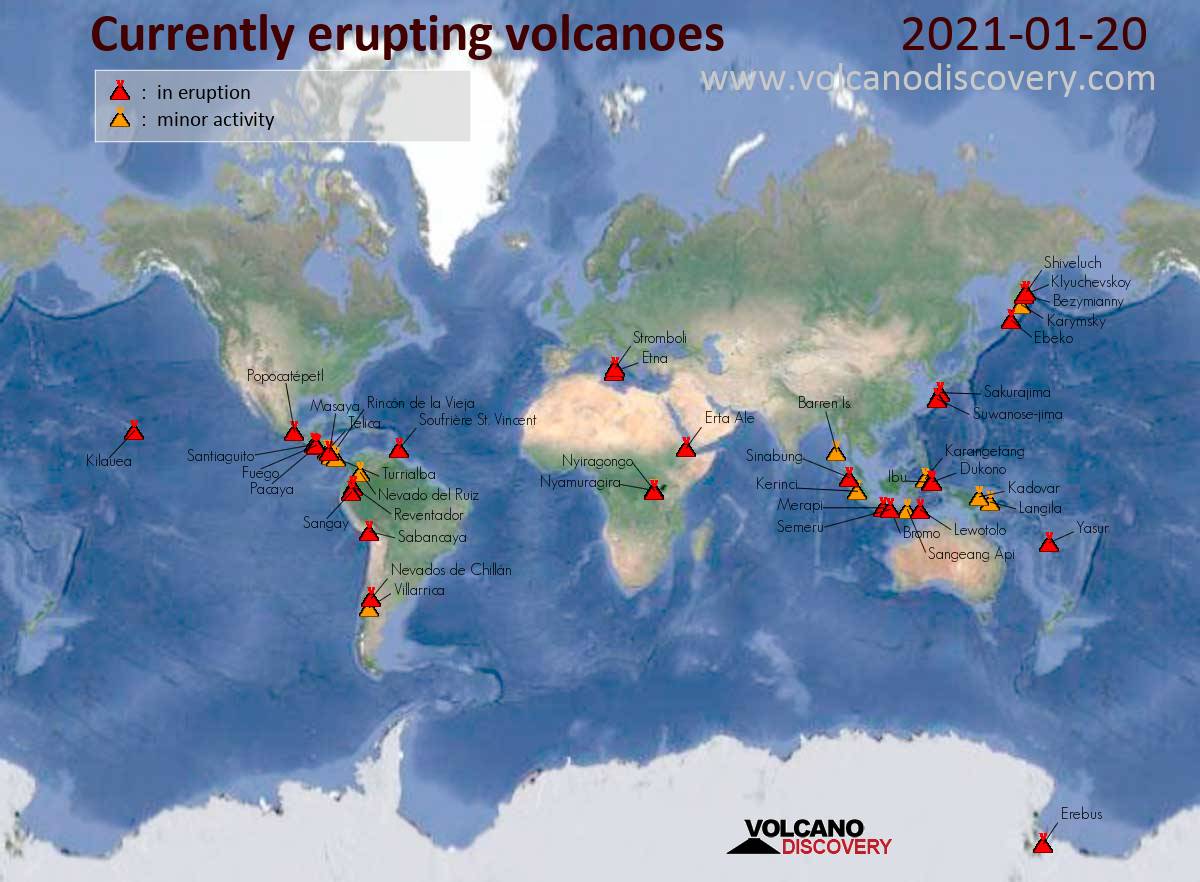 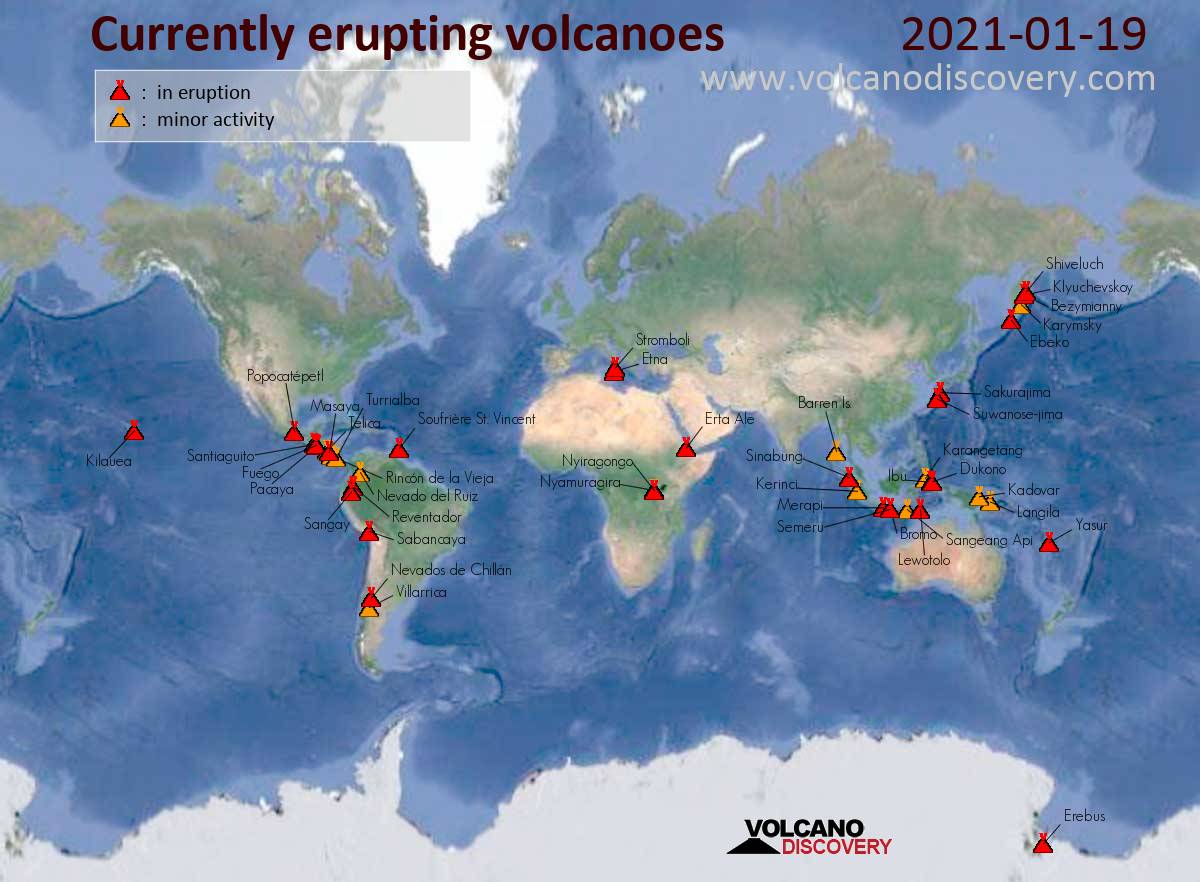 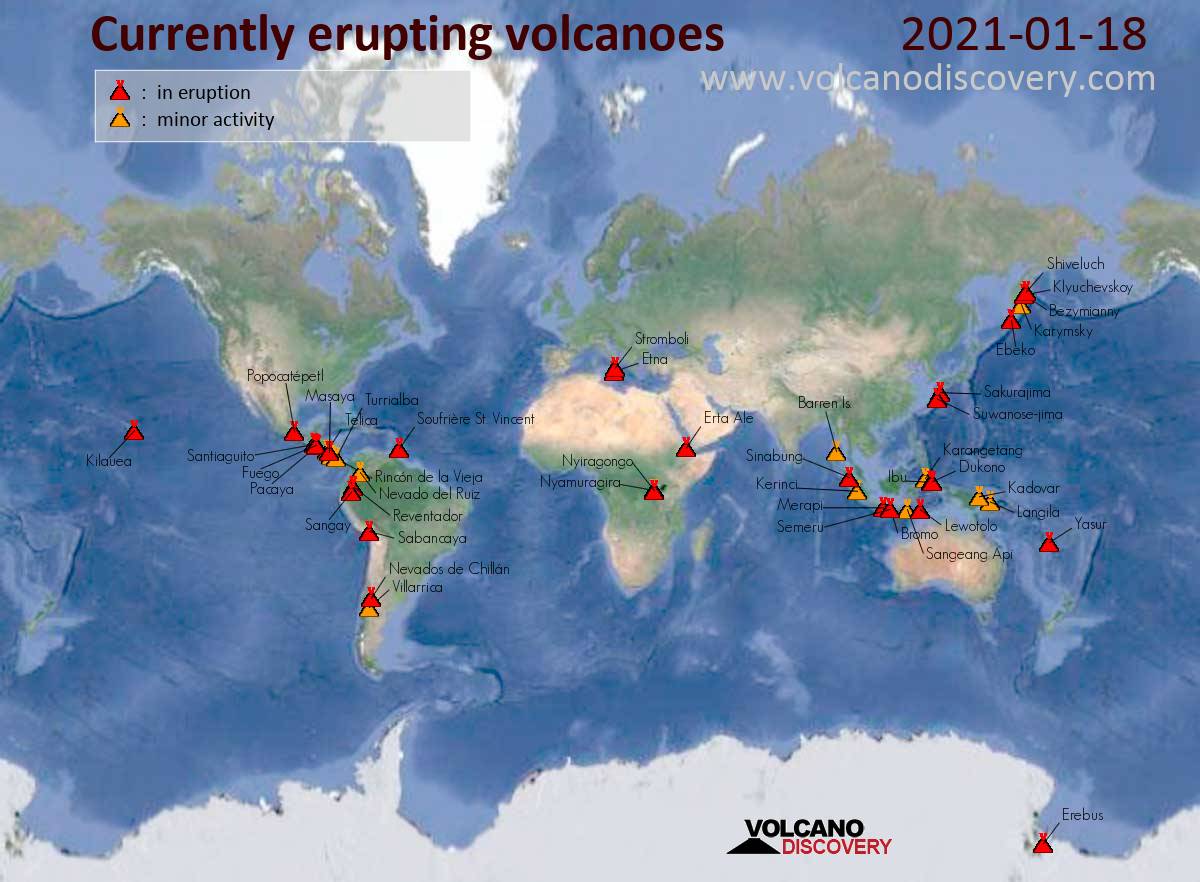 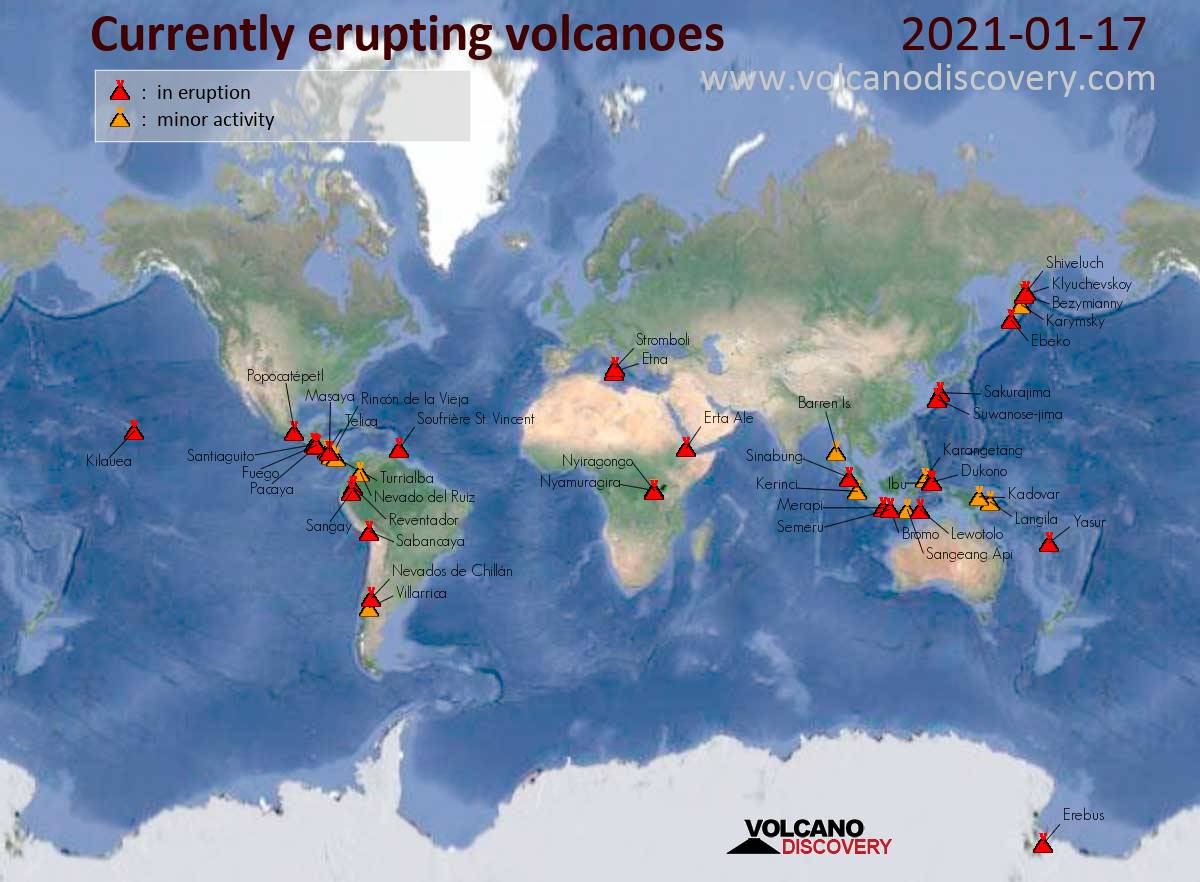 Etna (Sicily, Italy): This morning, the ongoing eruptive activity at the volcano changed: a lava flow started to emerge from a vent on the eastern summit of the New SE crater and quickly descended to its base. ... Read all
Watch Volcanoes Live

Volcano Videos on YouTube
Our YouTube channel: volcanic activity world-wide shown through videos taken during our volcano tours and expeditions complimented by some time-lapse videos from webcams.
Destinations

Tours by destination
We travel to volcanic areas worldwide: from Greece and Italy, Iceland, to Hawai'i, Japan, Indonesia, Vanuatu. We even offer a Round-The-World tour to volcanoes.
Sea-Floor spreading

Photos from Italy
Italy - the cradle of volcanology. Browse through various photo galleries mainly from its numerous volcanic areas - from Naples to Etna and the Eolian Islands and more.
Hot Spots

Intraplate volcanism
A third tectonic setting where volcanism occurs is believed to be the result of mantle plumes and not directly related to plate boundaries. So called hot spot volcanoes fall into this category.
Get the ad-free version!
Why is there advertising on this site?
Support us - Help us upgrade our services!
We truly love working to bring you the latest volcano and earthquake data from around the world. Maintaining our website and our free apps does require, however, considerable time and resources.
We need financing to increase hard- and software capacity as well as support our editor team. We're aiming to achieve uninterrupted service wherever an earthquake or volcano eruption unfolds, and your donations can make it happen! Every donation will be highly appreciated. If you find the information useful and would like to support our team in integrating further features, write great content, and in upgrading our soft- and hardware, please make a donation (PayPal or Online credit card payment).