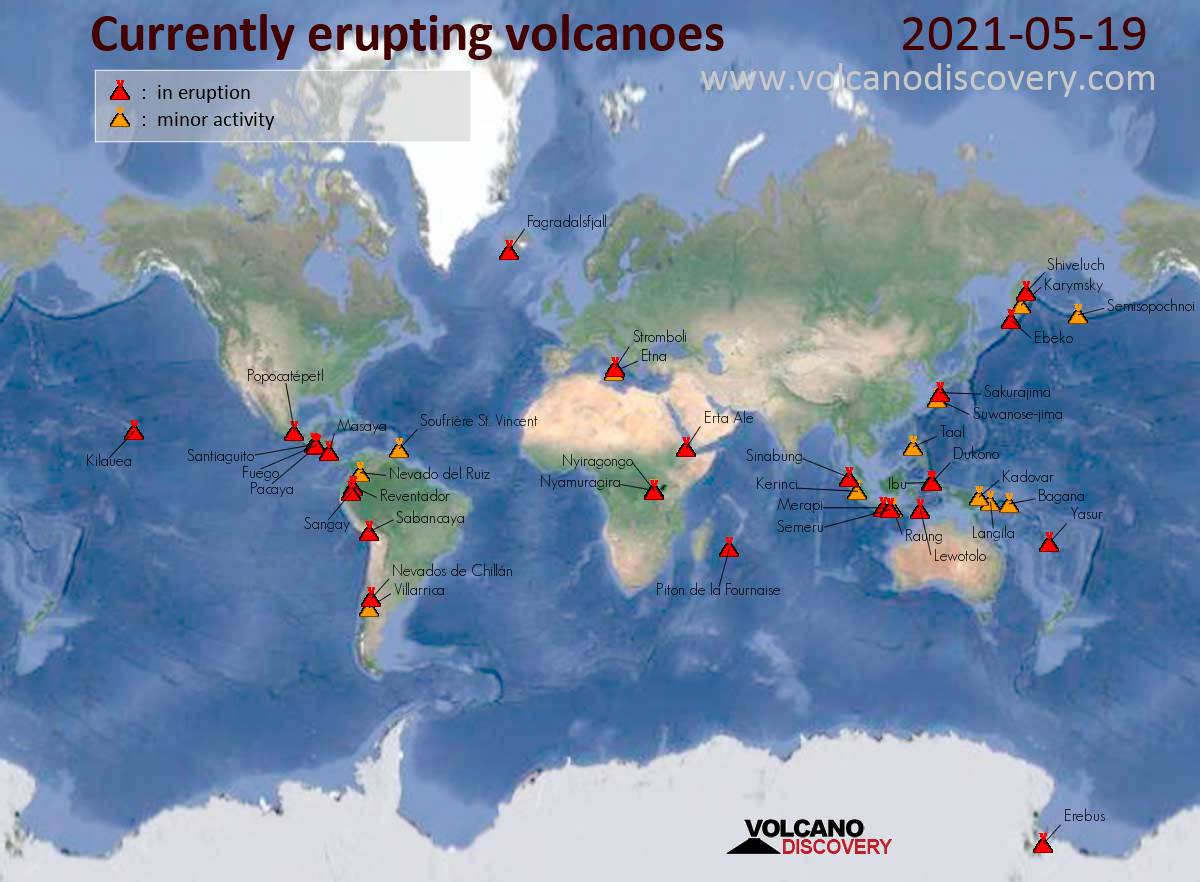 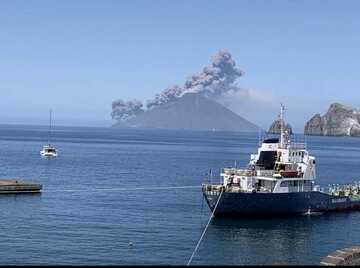 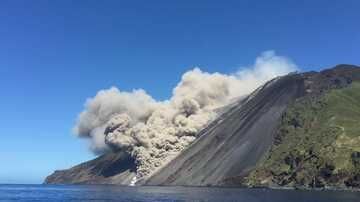 The pyroclastic flow seen from the southwest (image: facebook.com/ashara.it) 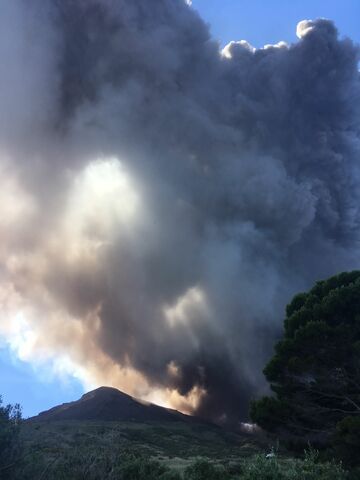 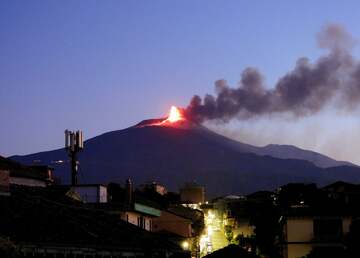 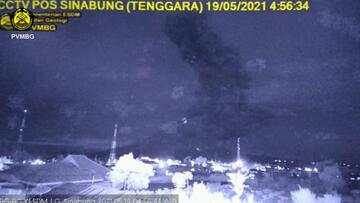 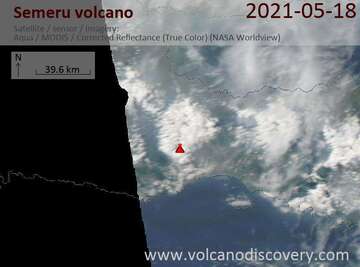 Satellite image of Semeru volcano on 19 May 2021 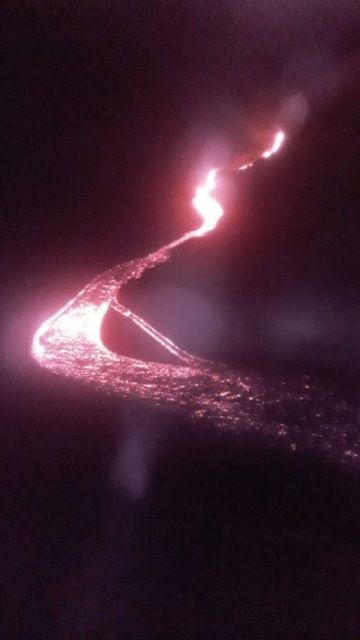 The lava flow emitted from the NW eruptive fissure vent on 11 May (image: INSIVUMEH)
Stromboli (Eolian Islands, Italy): After an aerial survey of staff from the volcanological institute in Catania (INGV), scientists concluded that part of the rim of the northeast crater had collapsed, producing a landslide that turned into the observed pyroclastic flow earlier today.
The following lava flow was therefore simply the result of the sudden breach in the uppermost part of the conduit, and thus likely to be only a short-lived overflow. It is not clear whether it is still active how, several hours after the event.
Most webcams are currently down and the area is not visible from the inhabited areas, so it is difficult to get a clearer picture right now, but we will follow up on this story when more information becomes available.

...19 May:
Shortly after the previously reported major event, which was first seen as a large ash plume rising from the area, a new lava flow started to emerge from a vent in the summit area, descended on the Sciara del Fuoco and reached the sea. How large it is is still unclear, but the fact that it reached the shore quickly suggests it might have an important rate of lava flow.
It came as a result of what happened immediately before: According to the latest information from the National Institute of Geophysics and Volcanology (INGV) in Catania, explosive activity increased from 2.47 pm local time at the northern vents (on the side of Stromboli village). At 2.51 pm, this culminated in a pyroclastic flow that reached the coast and traveled out above water for about 1 km beyond the coastline (!), while the associated ash plume rose to 1.5-2 km height. Pyroclastic flows are deadly, turbulent hot avalanche of lava rock fragments of all sizes embedded in a mixture of turbulent gas and ash racing down slopes.
... [read more]... [show less]
Video of the flow:


...19 May:
A significant event just occurred at Stromboli: friends of ours on the island just alerted us of a huge ash plume seen rising from the area of the Sciara del Fuoco at 14:51 local time.
What exactly happened is currently still unclear, but it could be - most likely - a larger rockfall event, or / and, possible in combination with a larger-than-usual explosion.
... [read more]... [show less]
Check again later for more updates!
Over the past 1-2 weeks, activity at the volcano had already been increasing significantly, from low to high levels.


Etna (Sicily, Italy): Almost without warning or significant preceding activity, a paroxysm - a short-lived, but intense lava fountaining eruption - took place at the New SE crater during the early hours today.
Shortly after midnight, volcanic tremor amplitude rose sharply to very high levels and a lava flow started to descend from the cone towards the SW into the upper Valle del Bove, as the magma column inside its conduit was being pushed up by a batch of gas-rich fresh magma.
Shortly after, strombolian activity began from the cone's summit crater as well, and quickly merged into moderate lava fountains. Shortly before the eruption, volcanologists could record a rapid inflation by about 1 microradiant of the volcanic edifice. By about 6 am in the morning, the eruption had ceased.

Taal (Luzon, Philippines): The volcano remains very restless - seismic and gas emission activity continue to be elevated, indicating that magma is moving and accumulating underneath the surface and might cause new eruptions at any time.
The seismic network detected 102 small volcanic earthquakes today and estimated SO2 emissions at 3,256 tonnes/day yesterday. Ground deformation parameters from electronic tilt, continuous GPS and InSAR monitoring continue to record a very slow and steady inflation and expansion of the Taal region that began after the January 2020 eruption. These parameters indicate persistent magmatic activity at shallow depths beneath the edifice.
Alert Level 2 (Increased Unrest) is currently maintained over Taal Volcano, but elevated unrest has been recurring and volcano conditions remain unstable.

Mayon (Luzon Island, Philippines): The volcano's activity remains stable, but above background levels. No quakes were detected during the past 24-hour observation period. PHIVOLCS reported "Moderate emission of white steam-laden plumes that crept downslope before drifting to the general northwest was observed. Faint crater glow from the summit could be observed at night."
"Continuous GPS monitoring indicate that the edifice is still inflated relative to July 2019 despite a period of general deflation since July-August 2020 and has been undergoing short-term inflation since November 2020. Deflation of the edifice with short-term inflation of the northwestern slopes since December 2020 has also been recorded by electronic tilt monitoring."

Sinabung (Sumatra, Indonesia): (19 May) The explosive eruption of the volcano continues at high levels.
Another vigorous eruption, lasting about 11 minutes, occurred at 04:48 local time this morning at the volcano.
... [read more]... [show less]
According to PVMBG volcano observatory, a dense dark ash plume rose to estimated 6 km altitude and drifted east and south.

Semisopochnoi (United States, Aleutian Islands): (19 May) The alert level of the volcano was raised to yellow this morning, after the volcano observatory in Alaska (AVO) detected several small explosions in regional infrasound data.
An ash cloud was spotted in a satellite image from 15:21 (23:21 UTC) on 17 May 17.
According to the latest update of AVO, "small eruptions producing minor ash deposits within the vicinity of the active north crater of Mount Cerberus and ash clouds under 10,000 ft above sea level are typical of recent activity at Semisopochnoi. Weather clouds up to 15,000 ft above sea level currently obscure the volcano."

Pacaya (Guatemala): (19 May) According to the local observatory, the effusive eruption, which began on 29 April, started to decrease significantly over the past days.
The eruptive fissure vent on the NW flank ceased to feed the lava flow, but nevertheless slowly advancing towards the base of the edifice.
... [read more]... [show less]
Water vapor, gas and minor ash emissions continue at the Mackenney summit vent which reached approx. 11,100 ft (3,400 m) altitude spreading about 10 km of the volcano. 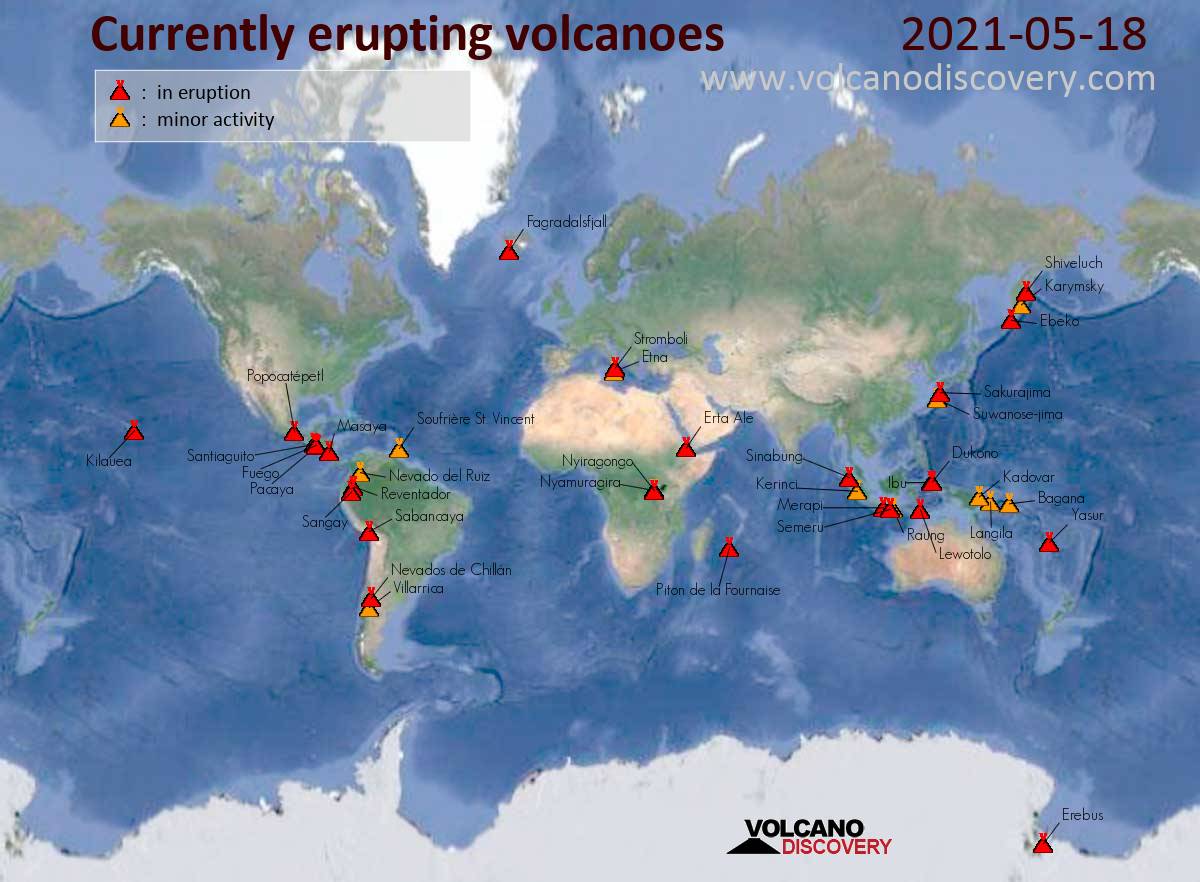 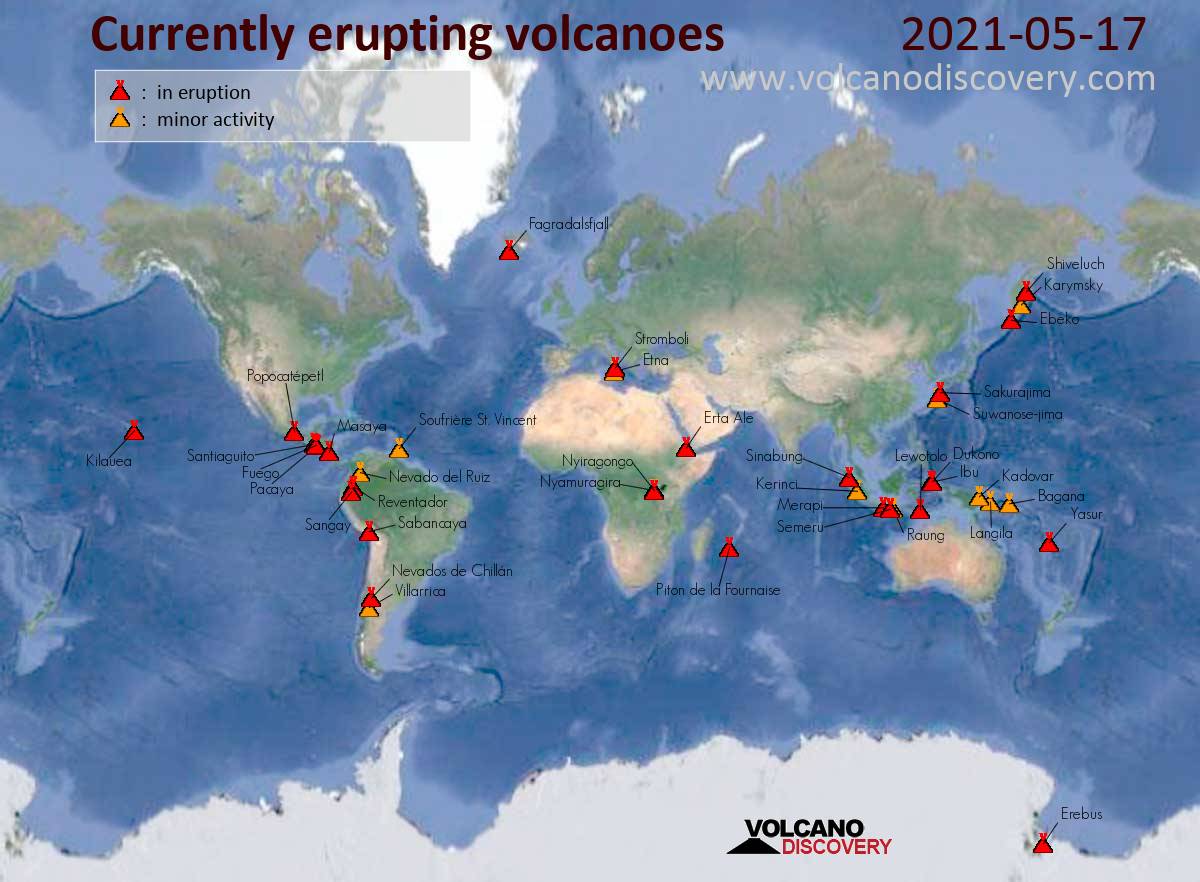 Fagradalsfjall (Reykjanes Peninsula, Iceland): (17 May) Our tour organizer Chris is already on Iceland and enjoying the show of the eruption. He sent us a selection of images taken last weekend - have a look! ... Read all
Show more
Sun, 16 May 2021, 21:00
Volcanic activity worldwide 16 May 2021: Pacaya volcano, Fuego, Dukono, Reventador, Sangay, Nevados ... 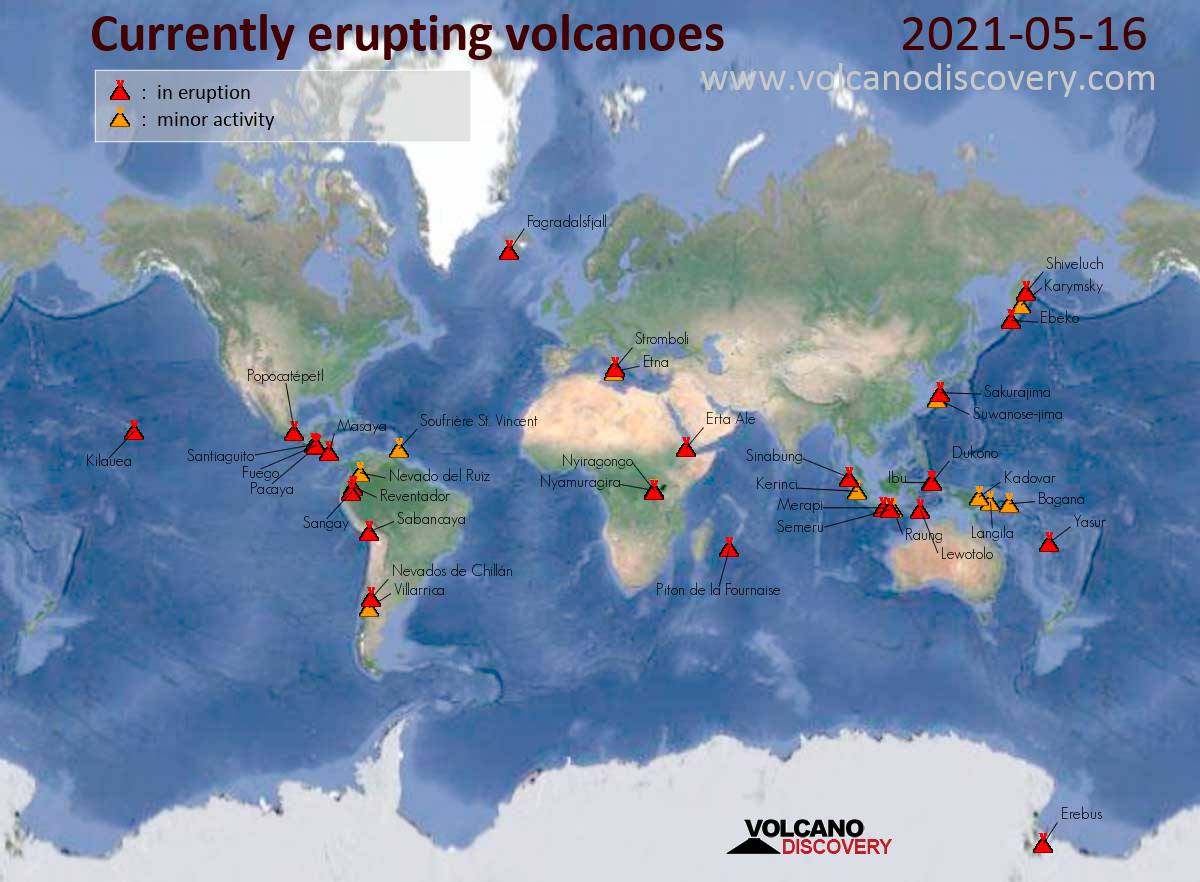 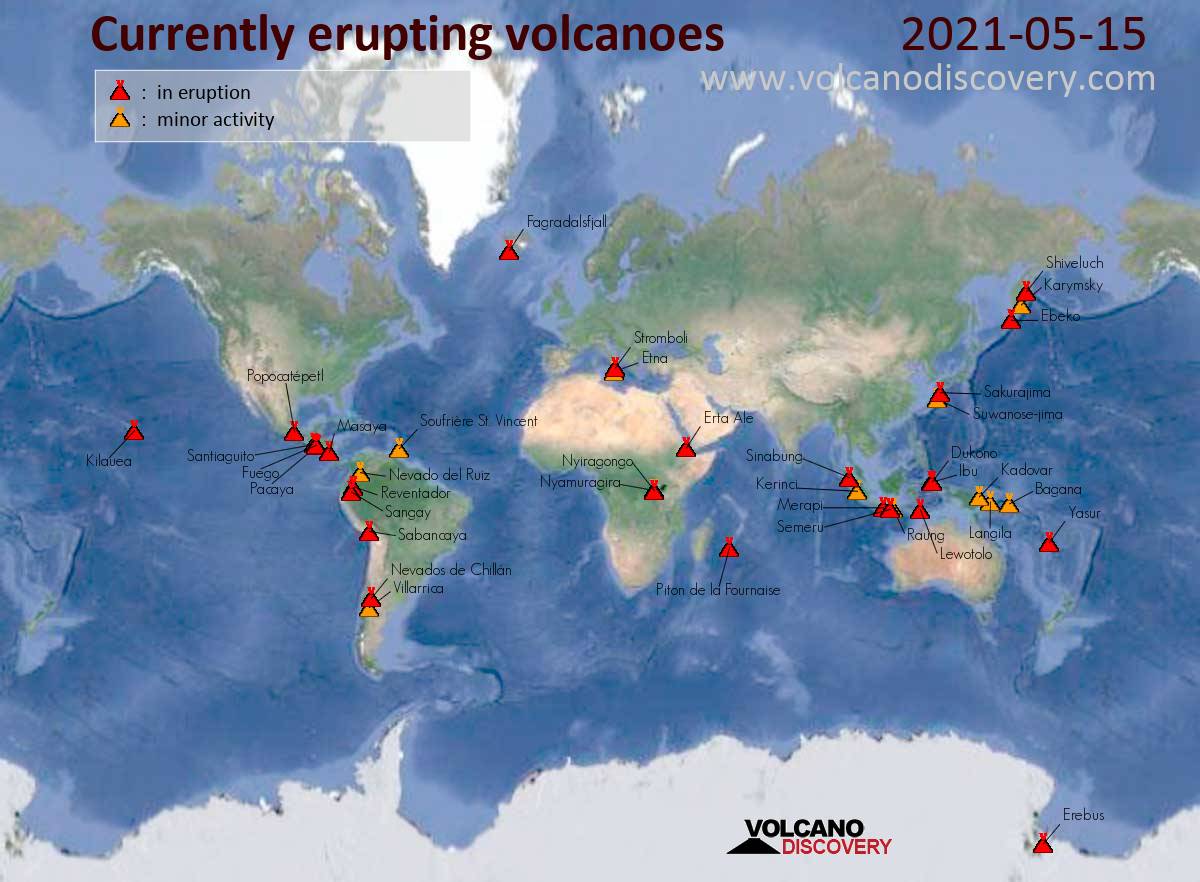 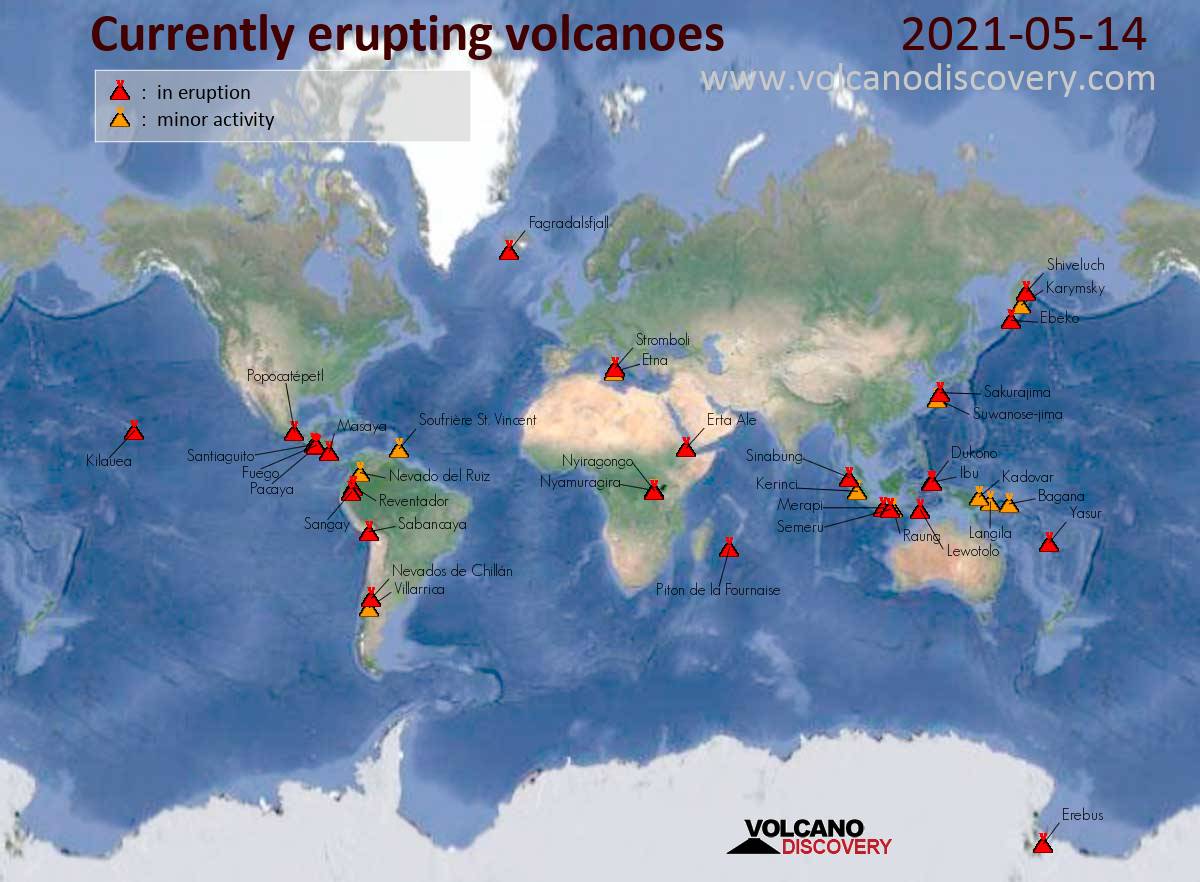 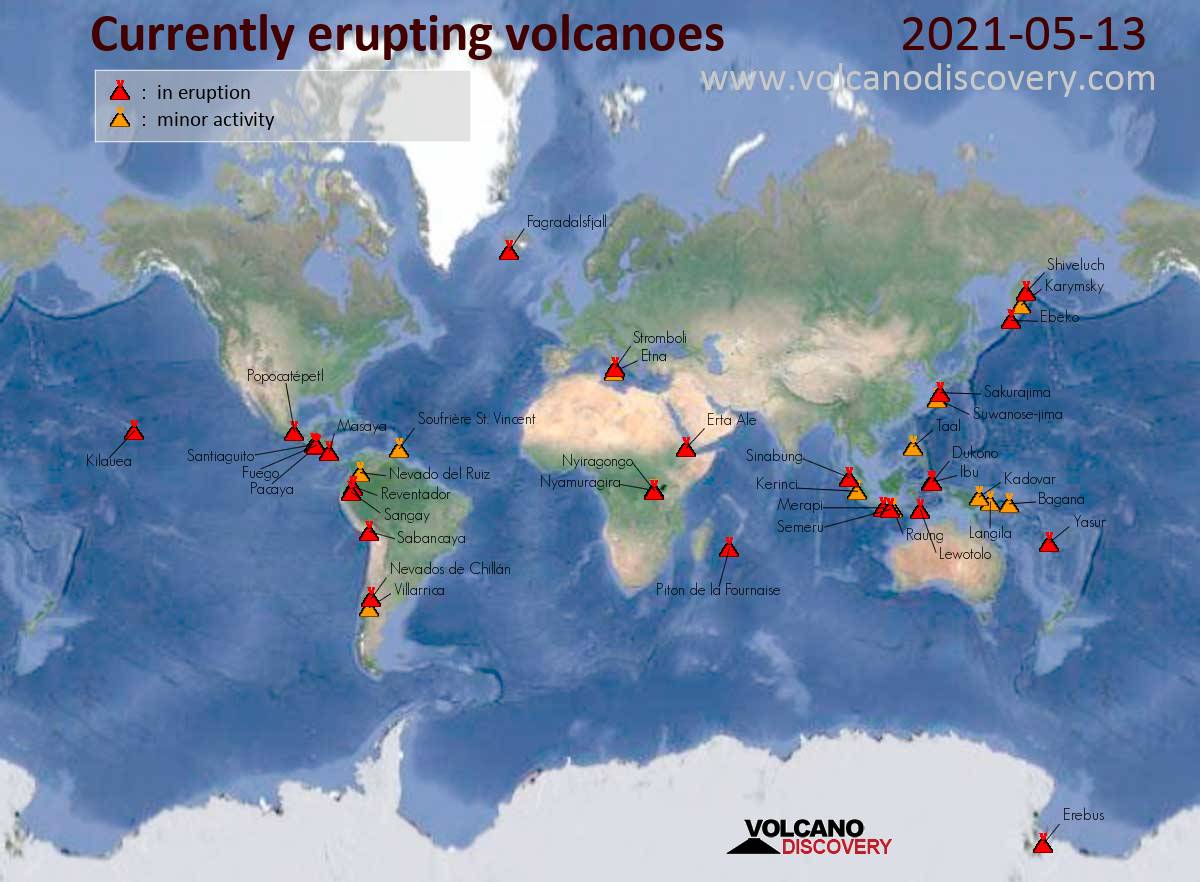 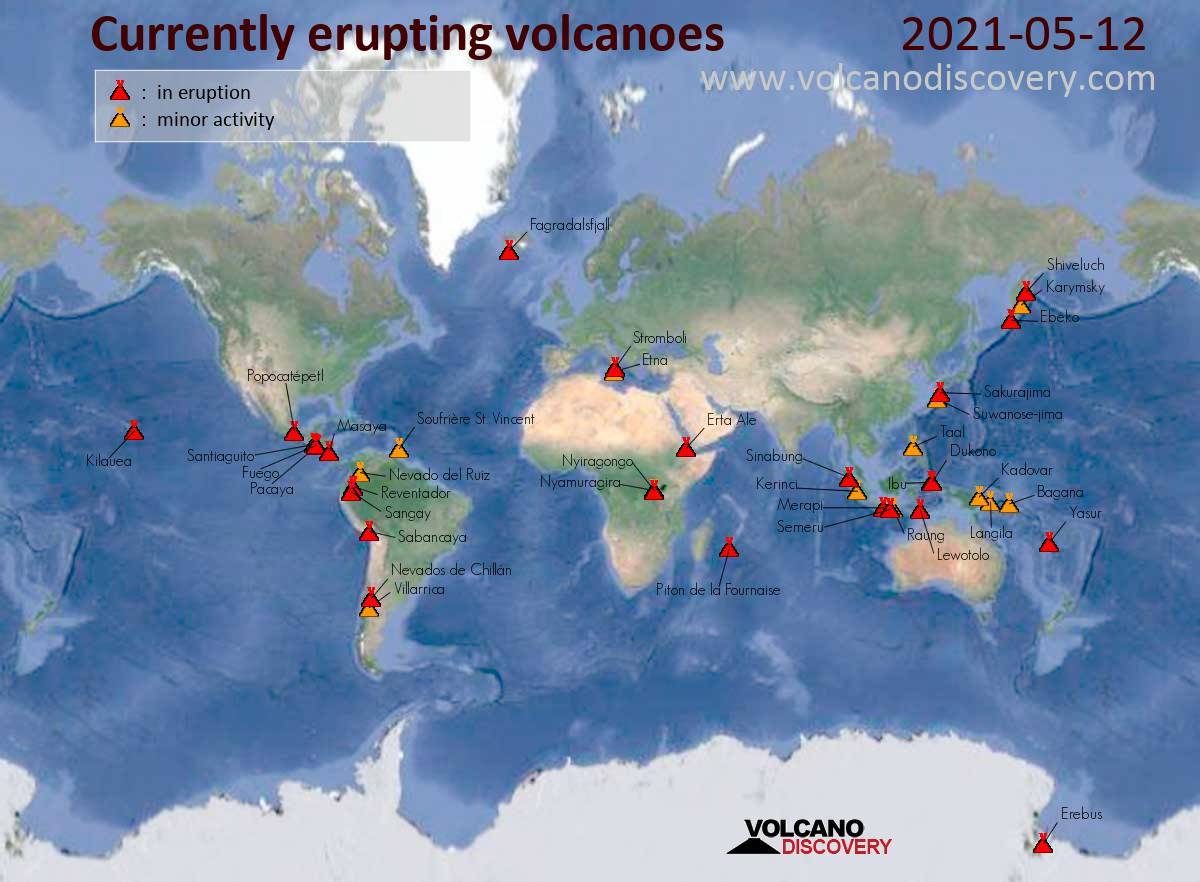 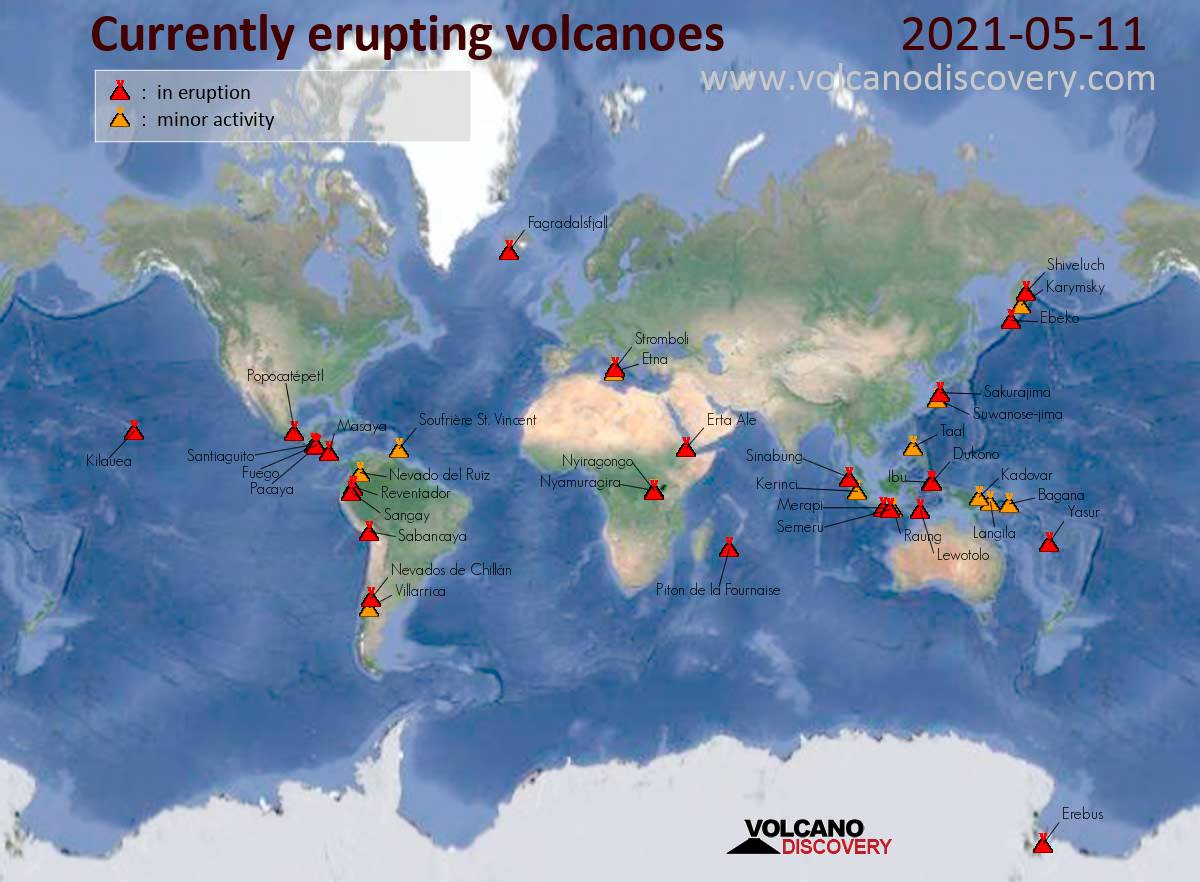 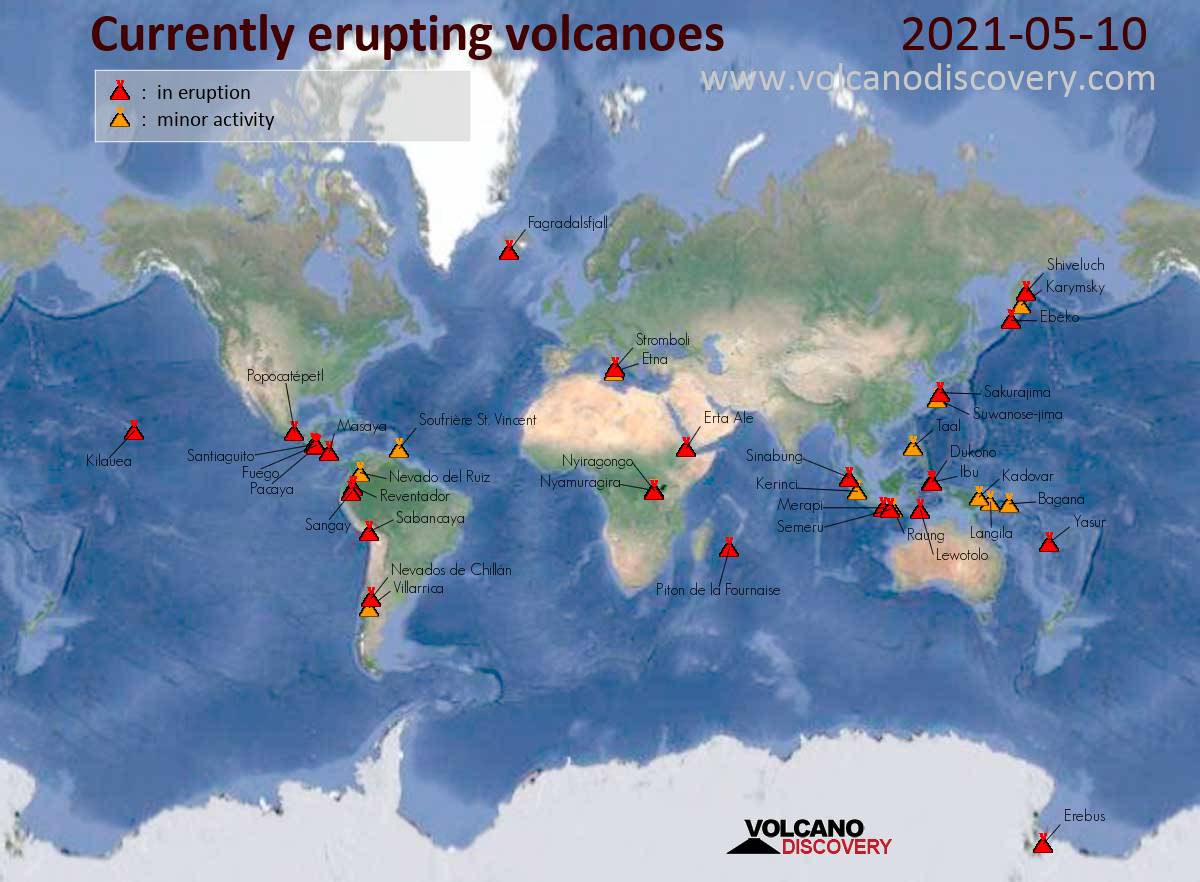 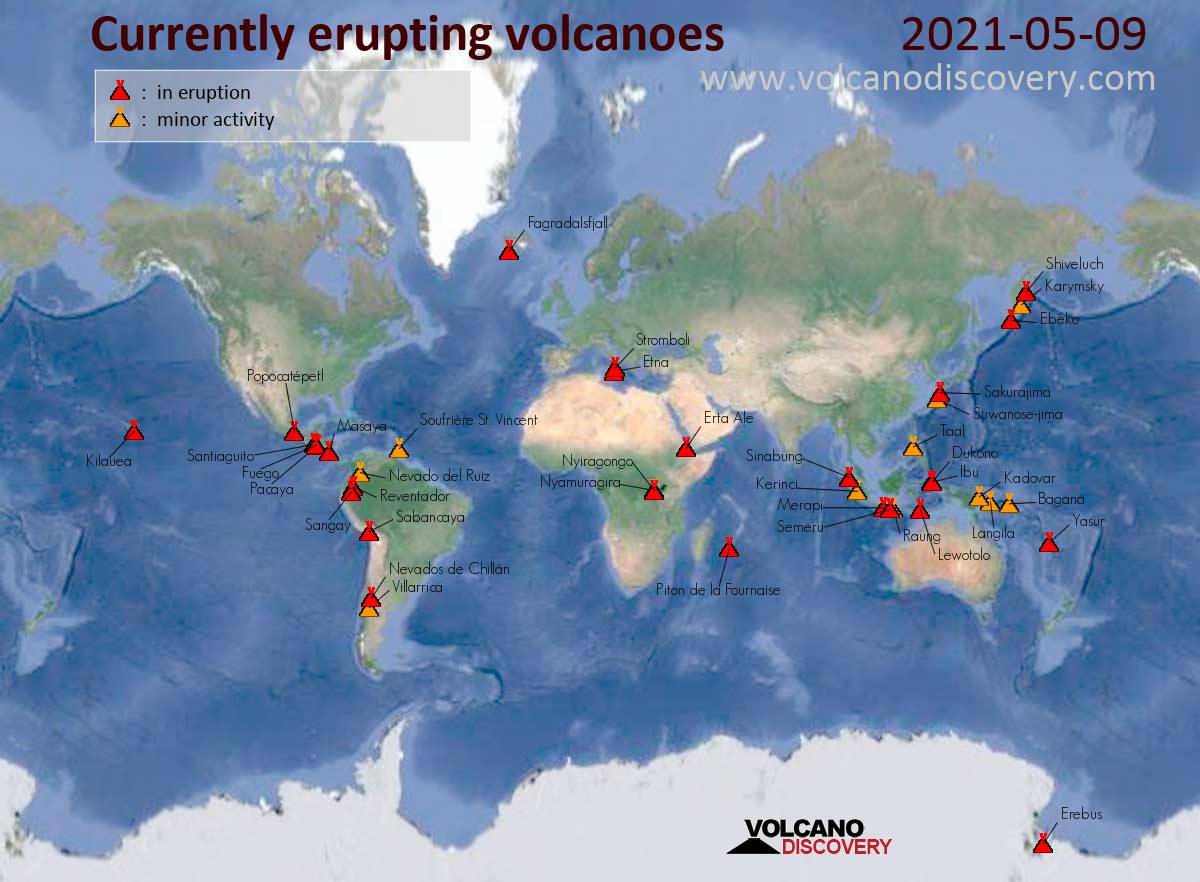 Photos from Greece
We have traveled all over Greece, in particular on its active volcanic areas such as Santorini, Nisyros, Milos, Methana.
California earthquakes

Reviews from our guests
"Your Vanuatu Volcano tour was a fantastic mix of hard core volcanoes and cultural Vanuatu life... " -
Read what customers said about us!
Volcano Database

Etna's steam rings
A collection of fantastic vortex rings ("smoke rings") we observed recently on Etna.
Get the ad-free version!
Why is there advertising on this site?
Support us - Help us upgrade our services!
We truly love working to bring you the latest volcano and earthquake data from around the world. Maintaining our website and our free apps does require, however, considerable time and resources.
We need financing to increase hard- and software capacity as well as support our editor team. We're aiming to achieve uninterrupted service wherever an earthquake or volcano eruption unfolds, and your donations can make it happen! Every donation will be highly appreciated. If you find the information useful and would like to support our team in integrating further features, write great content, and in upgrading our soft- and hardware, please make a donation (PayPal or Online credit card payment).