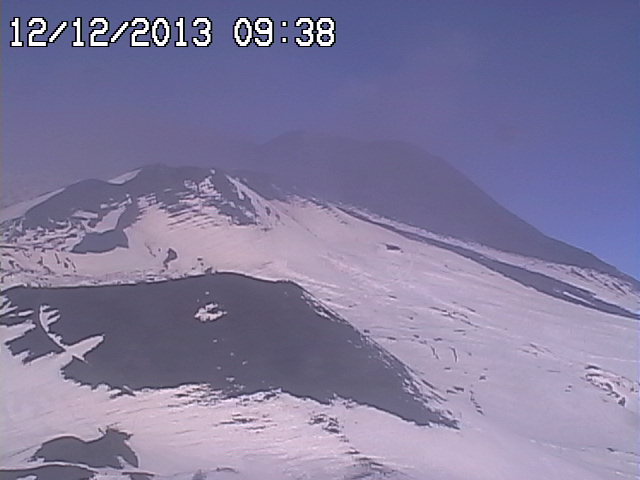 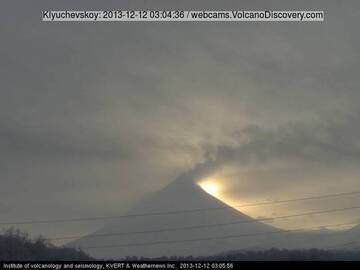 Comparison of the new Island off Nishino-shima between 20 Nov (surtseyan activity) and 10 Dec (end of strombolian and effusive? activity) (screenshots and annotations by Blog Culture Volcan) 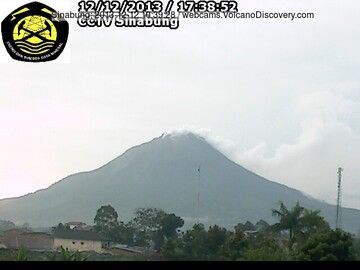 Degassing from Sinabung volcano
Etna (Sicily, Italy): The situation has remained more or less unchanged. Etna has been quiet except intense degassing from the NE crater and a faint plume from the NSEC. There are currently no signs of the expected next paroxysm at the New SE crater and tremor has decreased overall during the past days (of course, this can change quickly).

Nishino-shima (Volcano Islands, Japan): Activity has decreased significantly over the past days. A video from 10 December shows no more strombolian explosions, only degassing and no significant changes to the size of the island compared to a week ago. It is possible that there is still weak effusion of lava, but it appears that the eruption could have come to an end.


Sinabung (Sumatra, Indonesia): No ash emissions have been detected during the past 48 hours, the crater shows only a degassing plume, but alert level remains at red, because new explosions could occur any time. The government has extended the emergency status until at least 21 December, which implies that the more than 17,000 evacuees remain in the total of 31 shelters. Their situation is difficult, with help needed in form of food, water, medicines and sanitary supplies.
Blog Culture Volcan has posted an interesting comparison of clear webcam images over the past weeks, that illustrate the progressive opening of 3 distinct vents. This also helps explaining the observed shift from discrete vulcanian explosions towards semi-continuous ash venting: as more vents became available, it is easier for the volcano to release gas and thus, decrease pressure build-up.

Merapi (Central Java): Another small phreatic explosion occurred at the summit lava dome this morning at 08:10 local time. it produced an ash plume rising 500 m. According to VSI, rainwater infiltration into the hot rocks of the dome caused the eruption. 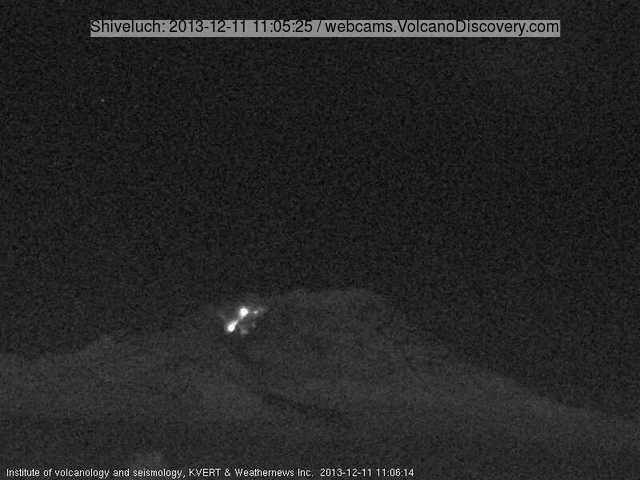 Shiveluch (Kamchatka): The lava dome continues to grow, producing incandescent avalanches on to the SW and SE as well as small explosions, visible on the following video from today's activity in time-lapse: ... Read all
Tue, 10 Dec 2013, 15:56 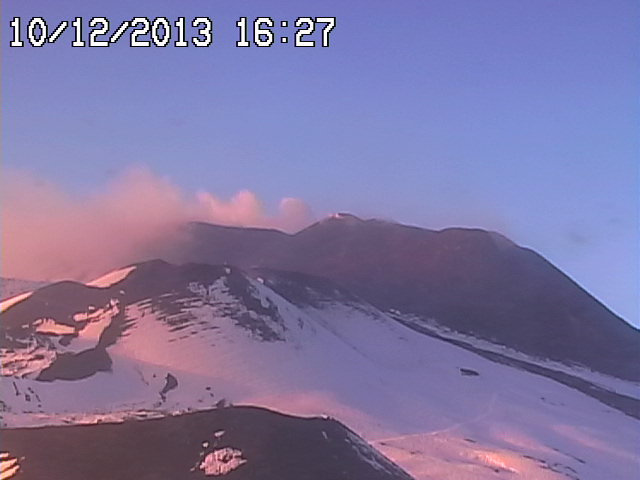 Etna (Sicily, Italy): The New SE crater has remained calm; after the increase yesterday, tremor has descended back to low levels and continues to fluctuate. ... Read all
Show more
Mon, 9 Dec 2013, 16:12

Etna (Sicily, Italy): A temporary steep increase in tremor amplitude earlier today (but with no other visual changes) rose some expectations about a new paroxysm, which would be now "due" if Etna kept her rhythm of 5-7 days intervals. However, it turned out to be only a short-lived peak, and it seems we have to wait a bit more. No explosive activity could be identified at the New SE crater. ... Read all
Sun, 8 Dec 2013, 17:03

Klyuchevskoy (Kamchatka): Ash emissions have continued at reduced intensity. This morning, the ash plume was about 300 km long drifting to the ENE. ... Read all
Show more
Sat, 7 Dec 2013, 17:03 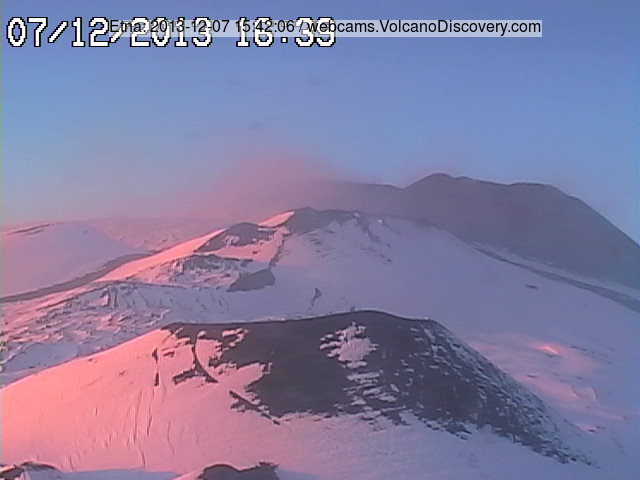 Etna (Sicily, Italy): Etna seems not to be heading towards another of its "Saturday evening shows" today. The New SE crater has remained quiet and tremor is low at more or less unchanged levels. ... Read all
Fri, 6 Dec 2013, 15:54 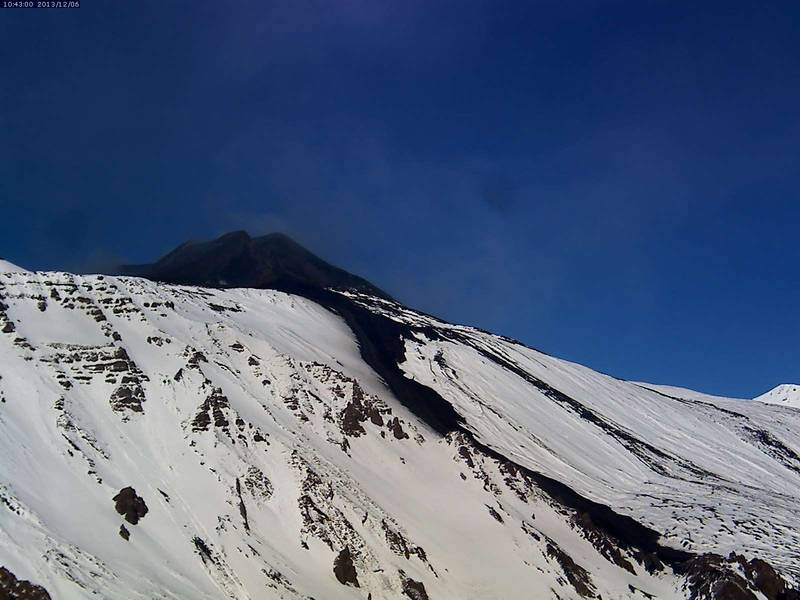 Etna (Sicily, Italy): No significant news from Etna so far. The brilliant weather shows the fiery lady in all her glory today. The latest lava flow towards Valle del Bove from Monday's paroxysm stands out as a dark black tongue against the white snow. Volcanic tremor has increased a bit, showing that the NSEC remains (mostly internally) agitated. ... Read all
Show more
Thu, 5 Dec 2013, 12:14 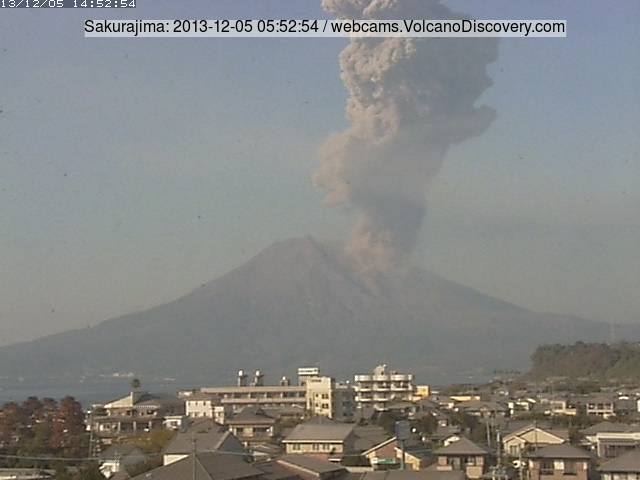 Etna (Sicily, Italy): The New SE crater remains restless. As the following time-lapse video of the past 24 hours shows, there is occasional weak lava extrusion from effusive vents on the upper flanks, and rarely glow from the summit vent suggesting that the magma column is relatively still high inside the vent and sometimes produces deep-seated strombolian explosions. ... Read all
Tue, 3 Dec 2013, 17:03 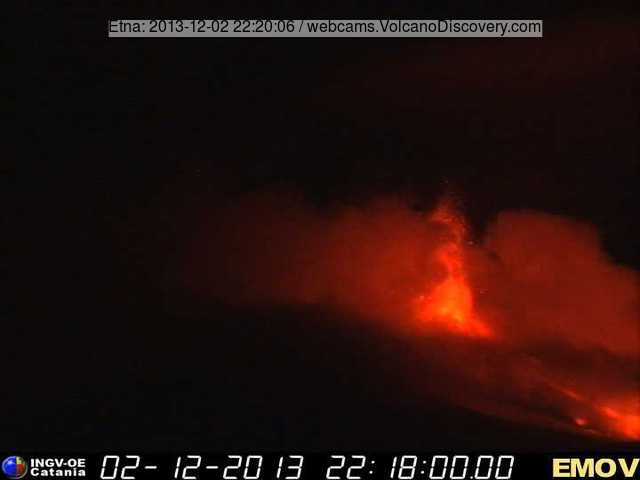 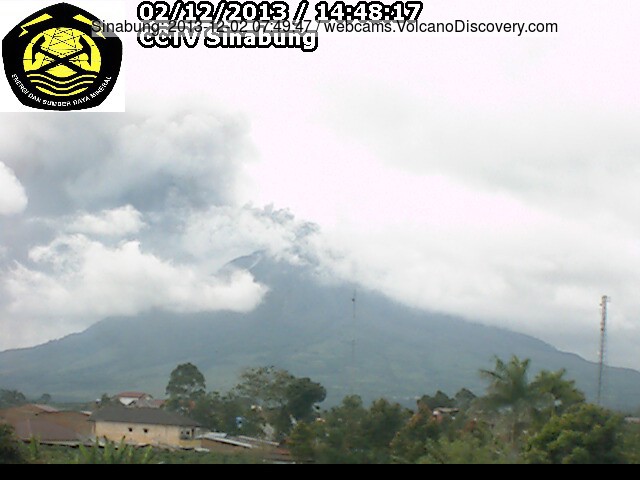 Etna (Sicily, Italy): The amplitude of tremor rose over night to levels that in the past weeks normally corresponded to intermittent strombolian activity at the New SE crater. However, bad visibility prevents direct observations. ... Read all
Watch Volcanoes Live

Anatomy of a vulcanian explosion
A violent vulcanian-type explosion from Anak Krakatau in pictures step by step.
Igneous rocks

Igneous or magmatic rocks
The most primitive rock type forms when magma (molten rock) solidifies - either inside the earth (plutonic rocks) or during volcanic eruptions (volcanic rocks). A short overview.
Etna

Etna volcano photos
Etna - Europe's largest and most active volcano is a universe in itself. Browse through our collection spanning almost 20 years of eruptions and more.
Cotopaxi Eruption 2015

Cotopaxi Eruption 2015 - updates
News and updates about the new eruption at Cotopaxi volcano, Ecuador, that started on 14 August 2015
Get the ad-free version!
Why is there advertising on this site?