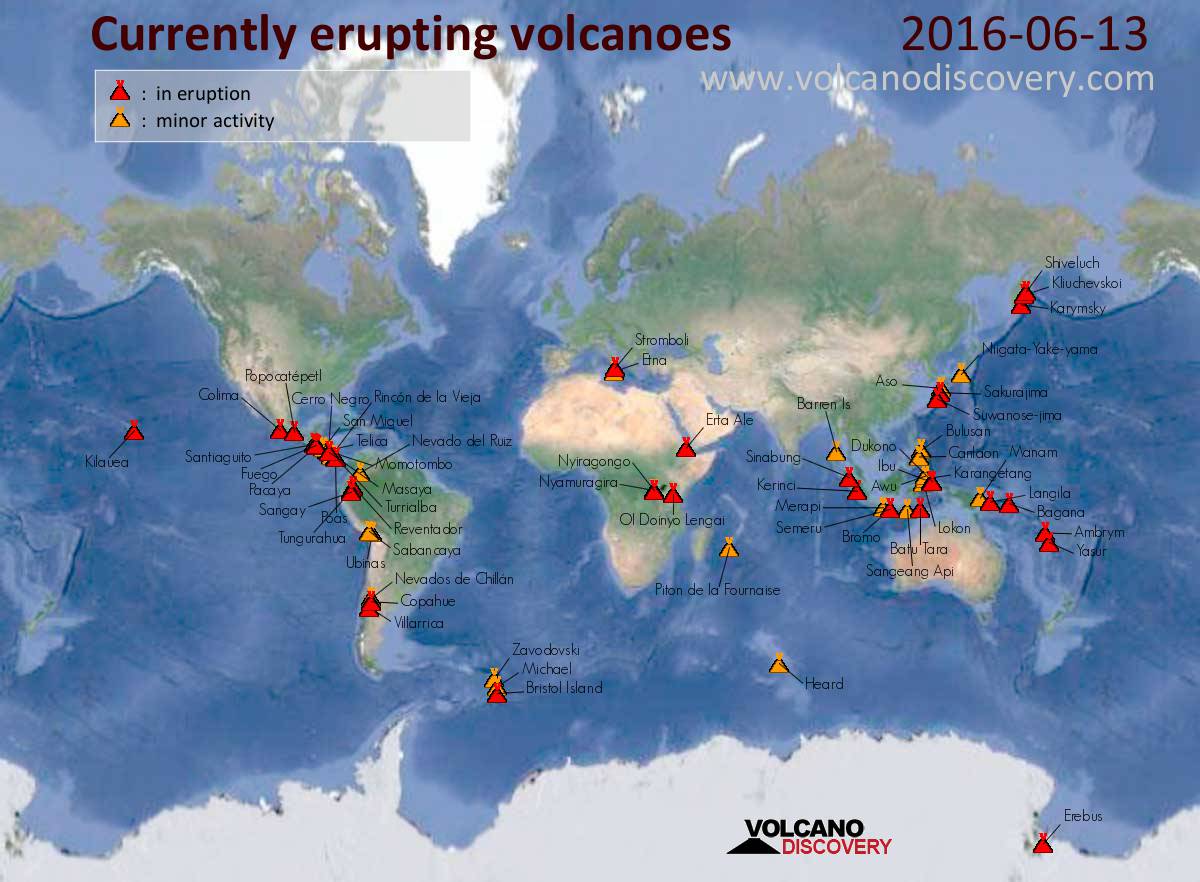 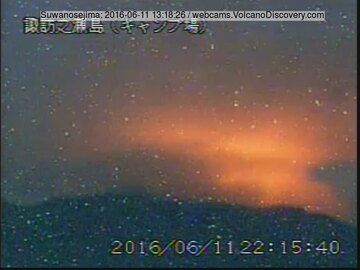 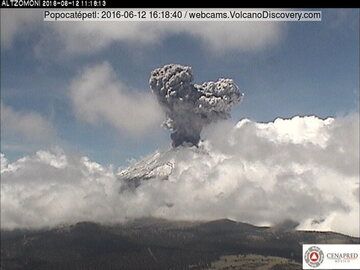 Mushroom cloud from Popocatépetl volcano yesterday (CENAPRED webcam)
Suwanose-jima (Ryukyu Islands): The activity of the volcano has become more intense during the past days. Several ash plumes were detected by Tokyo VAAC and blight glow is intermittently visible on the webcam.
Most likely, the volcano has started another phase of intense, intermittent strombolian explosions.

Semeru (East Java, Indonesia): Access to the mountain was closed after a 26 year-old Swiss climber has been missing for 10 days now since he climbed the volcano on 3 June.
The young man who climbed the volcano without a guide was reported missing by a travel companion who had been in a different location for a few days and could notice his absence only 3 days later. Despite intense efforts, local search-and-rescue teams have so far been unsuccessful to locate the young man. It can only be speculated about his fate, but chances of his survival seem dwindling.
... [read more]... [show less]
The most likely causes for the accident are lost orientation on the mountain during ascent or descent, or perhaps falling into one of the difficult-to-access steep ravines draining on the volcano's steep slopes.


Suretamatai (Banks Islands, Vanuatu): The alert level of the volcano (also known as Vanua Lava) was recently raised a notch from 0 to 1 (on a scale of 0-4). No details about volcanic unrest are available, but presumably, the Vanuatu Geohazards Observatory recorded elevated seismic activity from the volcano.
Residents and tourists are reminded to stay outside of areas near the crater and in particular avoid the Sulfur River (E flank) were there is a high risk of volcanic gas emissions.

Popocatépetl (Central Mexico): A moderately strong vulcanian explosion occurred yesterday morning at 11:17 local time, producing a mushroom-shaped ash plume that rose approx. 3 km above the summit and dispersed in westerly directions.
Today, the volcano has been mostly calm with only minor emissions mainly of steam and gas.
The activity of the volcano itself has been very stable over the past months and at overall low to medium levels only; while lava is slowly accumulating in the summit crater, this growth of the lava dome is occasionally interrupted by explosions such as this one. 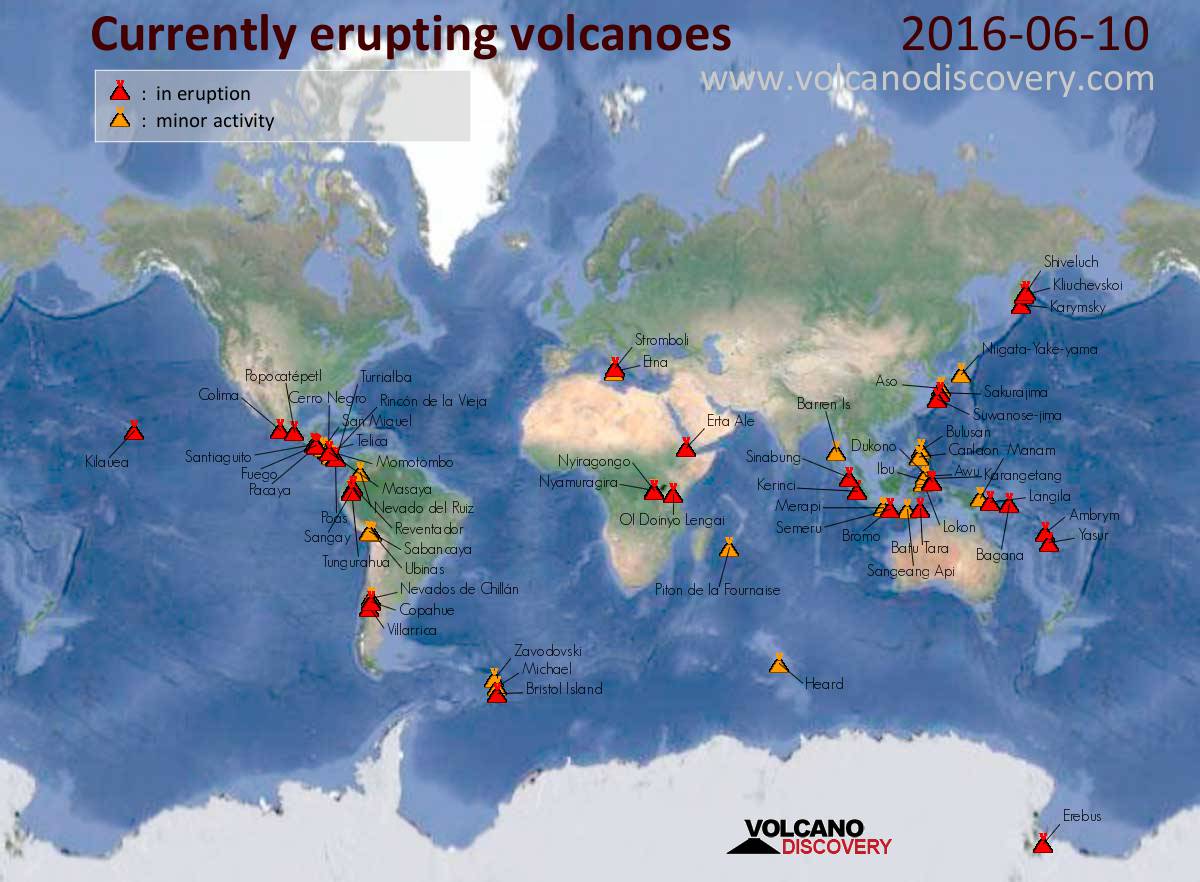 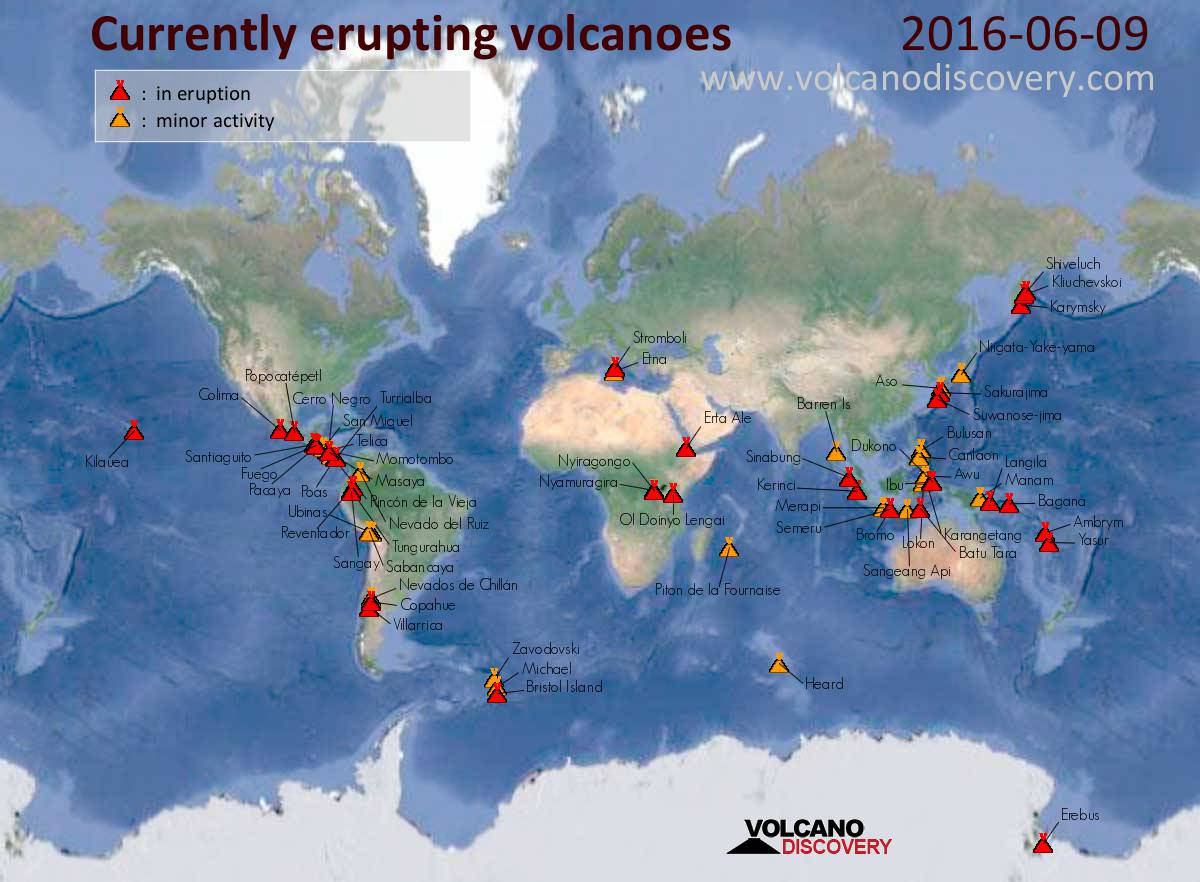 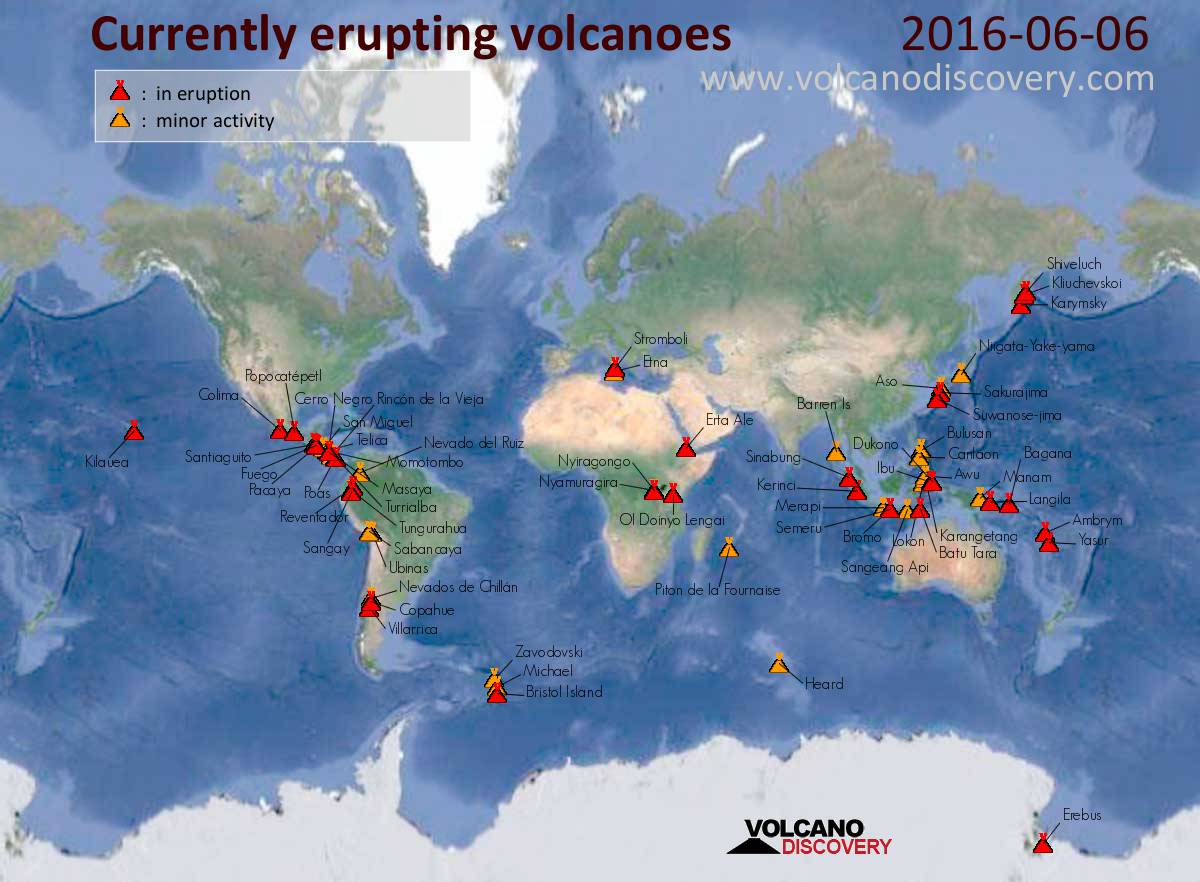 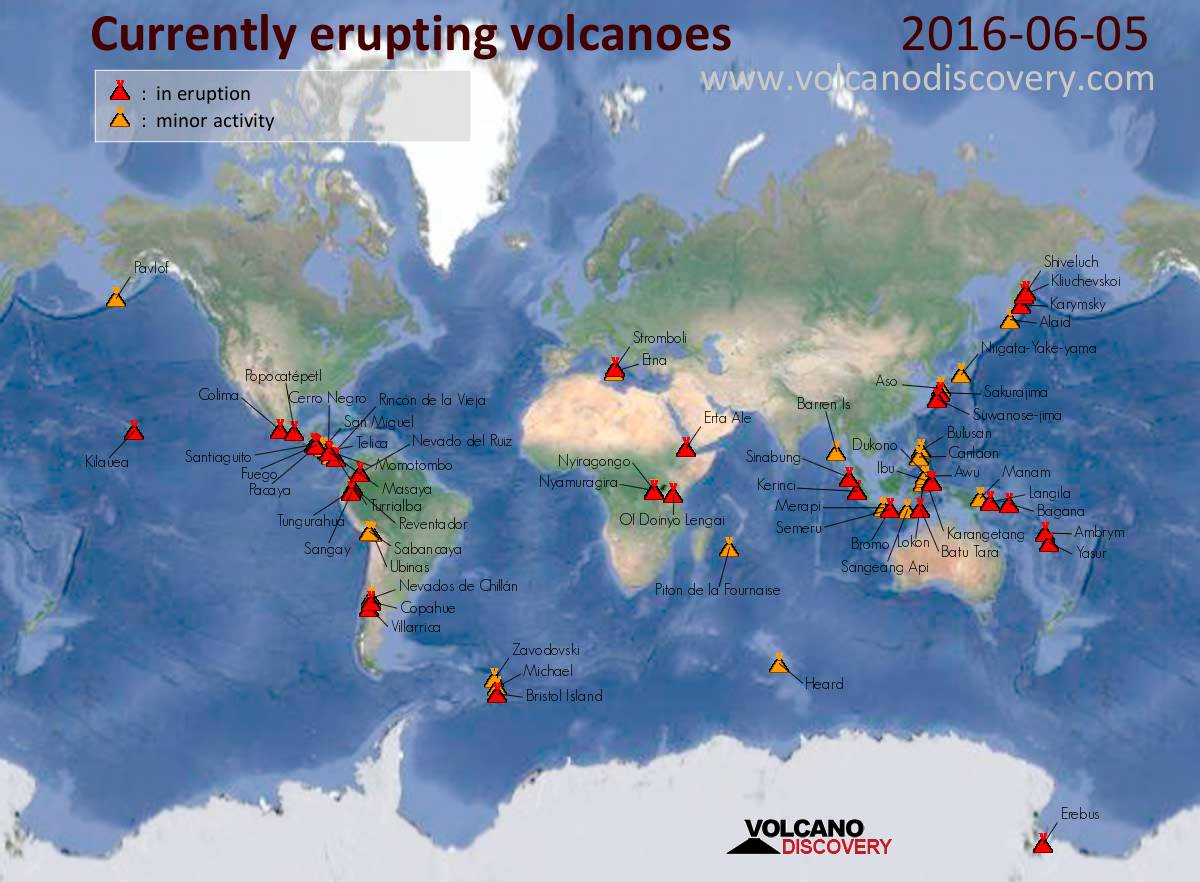 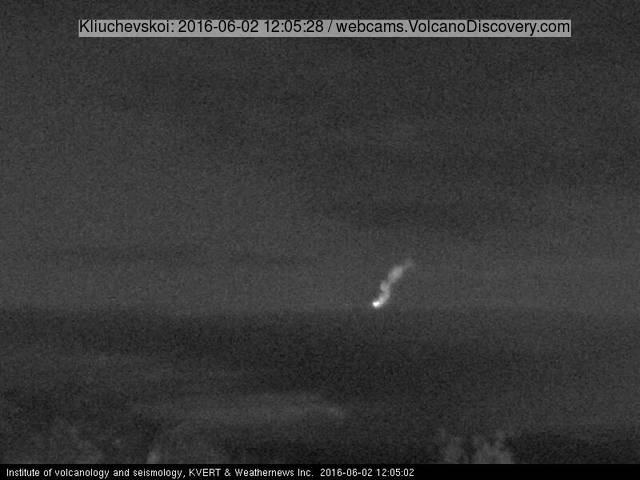 Kliuchevskoi (Kamchatka): The effusion of a lava flow on the southeastern flank of the volcano continues with little changes. A second flow branch has recently made its appearance. ... Read all
Fri, 3 Jun 2016, 21:00
Volcanic activity worldwide 3 Jun 2016: Kerinci volcano, Turrialba, Sakurajima, Zavodovski, Michael 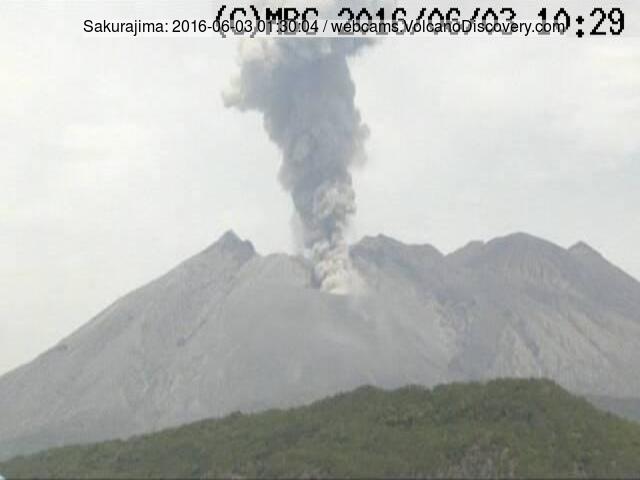 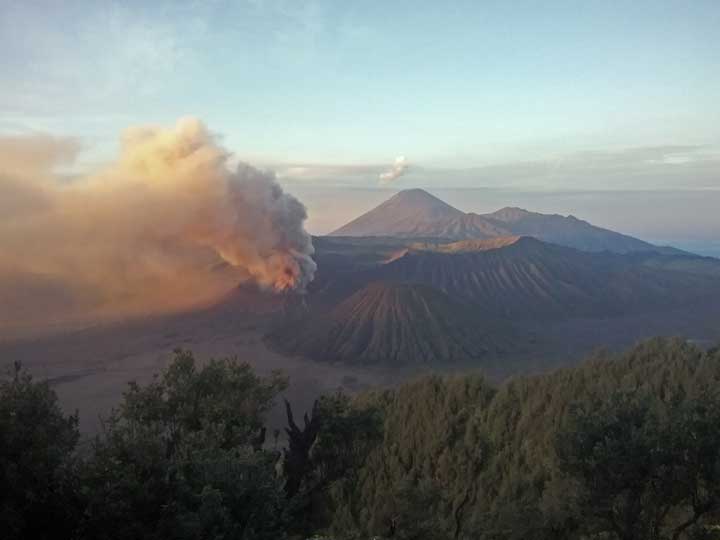 Bromo (East Java, Indonesia): (1 Jun) Our expedition leader Andi currently on location reported that the volcano's activity has been increased since 4 days ago, with visible activity consisting of mild phreatic explosions and strong steaming. ... Read all
Tue, 31 May 2016, 21:00
Volcanic activity worldwide 31 May 2016: Kilauea volcano 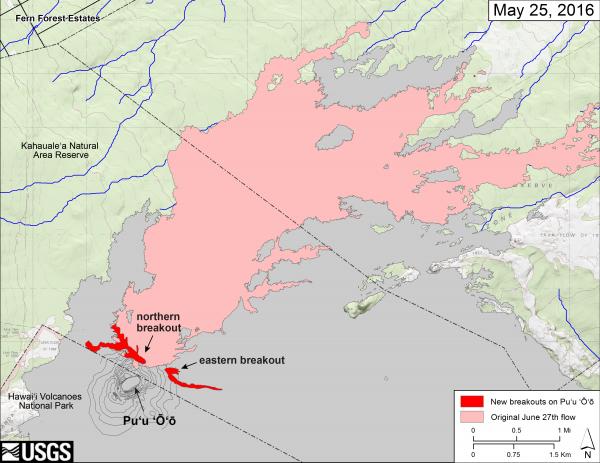 Kilauea (Hawai'i): Early in the morning of 24 May (at 06:50 local time), a sudden surge in lava supply caused the main lava tube carrying the lava underground away from Pu'u 'O'o to rupture. This resulted in two so-called surface lava breakouts located about 500 m N and NE from the cone, feeding two new large surface lava flows. ... Read all
Show more
Sun, 29 May 2016, 21:00
Volcanic activity worldwide 29 May 2016: Bromo volcano 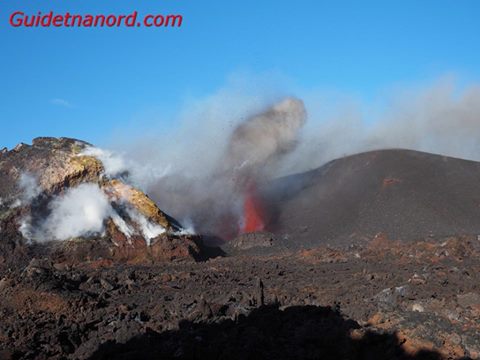 Etna (Sicily, Italy): (27 May) The violent strombolian activity from the Voragine summit crater continued all though Wednesday (25 May) and the following night, but gradually decreased and ceased yesterday. At the moment, no significant eruptive activity is going on. ... Read all
Watch Volcanoes Live

Great magnitude 8.2 Chile earthquake 1 April 14
Reports, maps and list of aftershocks. Did you know the seismic waves were recorded everywhere in the world?
Greece earthquakes

Latest quakes in Greece
Greece has a lot of earthquake activity, but most of them occur around the margin of the Aegean microplate. The Cycladic islands are located in its center and therefore seismically comparably quiet.
Etna Discovery
25 May - 1 June

Etna trekking tour
A tour entirely dedicated to Etna, the most active volcano in Europe. Spend 6 full days on Etna and get good chances to see eruptive activity.
Colima