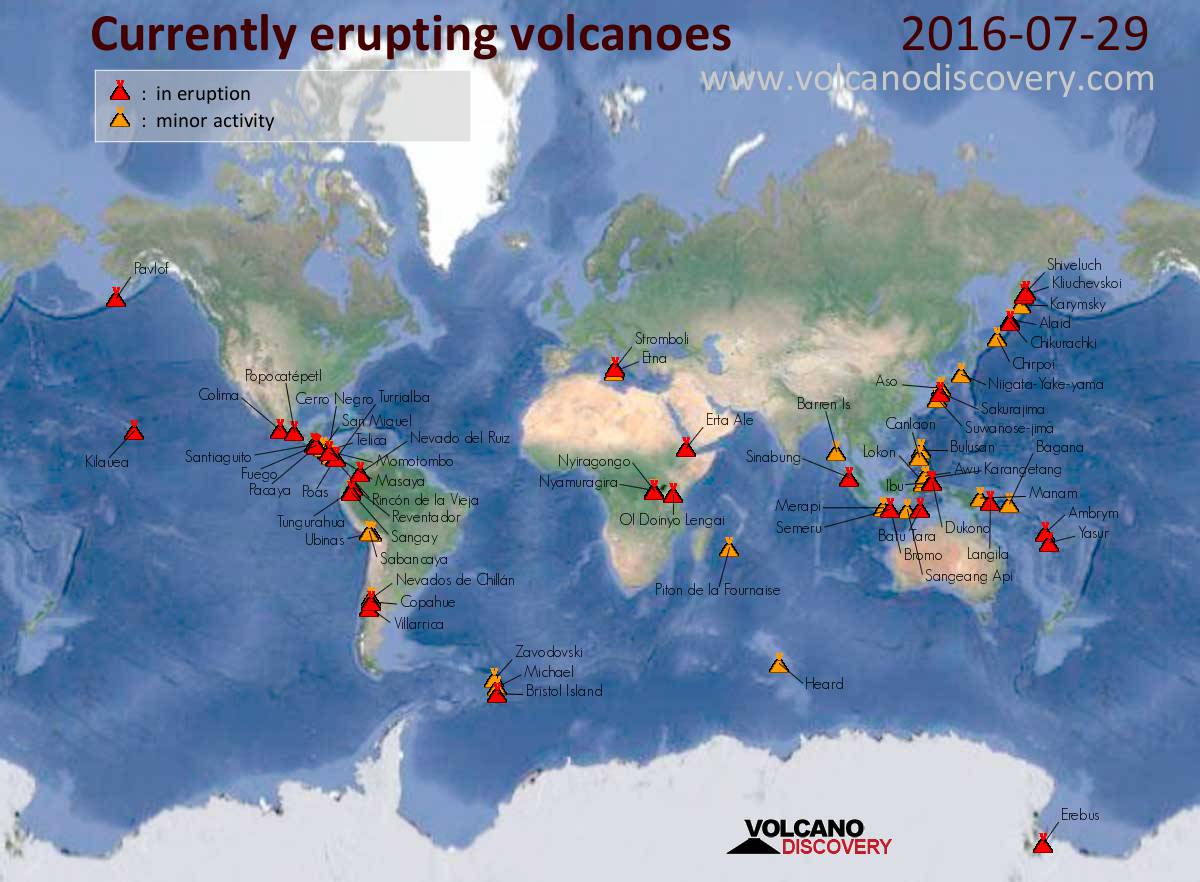 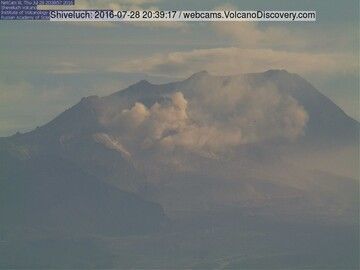 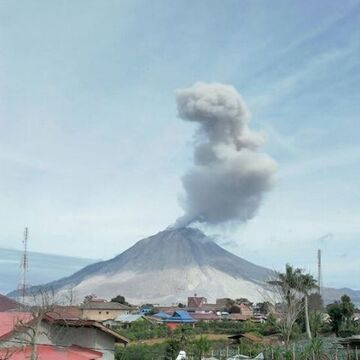 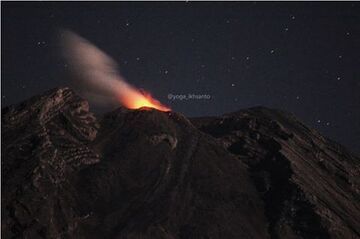 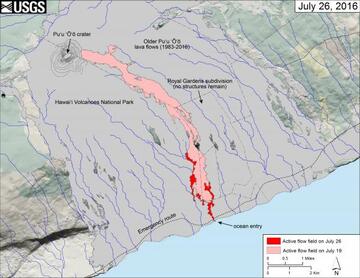 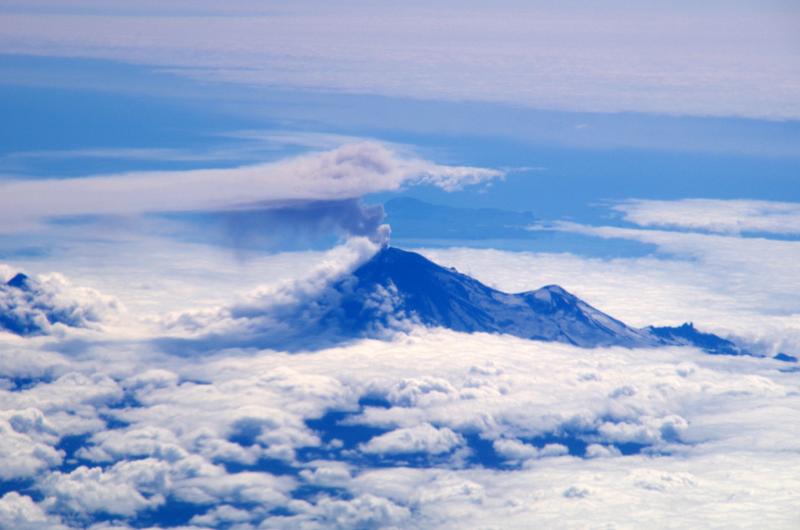 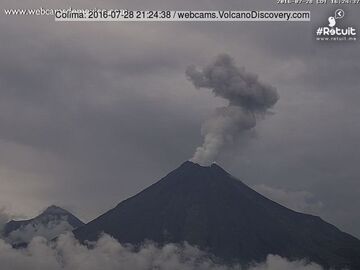 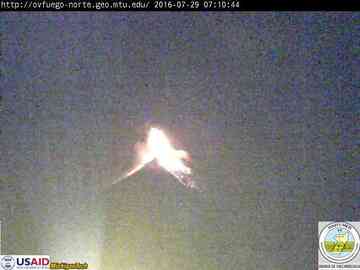 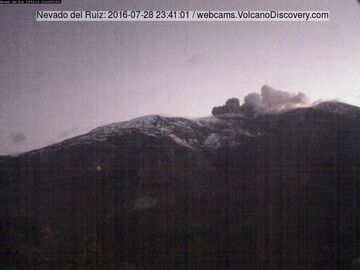 Number of earthquakes under Piton de la Fournaise volcano over the past weeks(OVPF)
Shiveluch (Kamchatka): The effusive and explosive activity at the volcano continue at currently relatively low levels. Occasional small avalanches occur from the active dome, but little or no glow can be seen on night-time webcam imagery, suggesting that the effusion rate is at the lower end at the moment.

Chirpoi (Kurile Islands, Russia): SVERT reported that a thermal anomaly over Snow, a volcano of Chirpoi, was detected in satellite images during 18 and 20-24 July. Steam-and-gas emissions were visible drifting SW on 16 July and may have contained minor amounts of ash. Steam-and-gas emissions during 22-24 July drifted as far as 90 km N. The Aviation Color Code remained at Yellow.

Kilauea (Hawai'i): As of yesterday evening (morning in Hawai'i), the new sea entry of the "61G" lava flow near the Kamokuna area continued to be active with and was at least 20 meters wide, spilling over the older sea cliff.
It can be expected that the sea entry will widen over time. Another lobe of the main flow has been advancing along the west margin and might hit the ocean soon as well.
At the summit and Pu'u 'O'o crater on the eastern rift zone, no significant changes have occurred. Halema'uma'u lava lake has risen a bit again to approx. 23 m below the crater floor rim and the lava pond inside Pu'u 'O'o is active as well.

Pavlof (Alaska Peninsula, USA): Weak eruptive activity has been observed at the volcano in the form of intense steaming and small ash emissions and the aviation color code was raised to orange yesterday.
Most likely, the summit crater vent is currently producing strombolian-type activity, possibly along with the effusion of lava flows. Seismic activity has been elevated.
... [read more]... [show less]
According to the Alaska Volcano Observatory (AVO), "vigorous steam degassing was observed in web camera images from Cold Bay (35 miles or 60 km SW) and Black Hills (20 miles or 35 km NNE) this morning. Satellite observations and pilot reports indicate minor amounts of ash associated with the steam cloud at an altitude of less than 15,000 ft (4.5 km) above sea level."


Colima (Western Mexico): Intermittent explosions continue at the volcano from time to time, but with comparably low intensity. No or little glow is visible from the volcano's summit at night, suggesting that the magma column is relatively deep inside the conduit currently.

Pacaya (Guatemala): Mild strombolian activity continues from the Mackenney crater. According to a recent report, this activity ejected glowing material to 75 m above the crater and weak incandescence could be observed from the crater at night.

Fuego (Guatemala): Another intense eruptive phase with strong explosions, lava fountaining and abundant lava flow activity is in progress at the volcano.
After increasing gradually over the past week, the new so-called paroxysm (the 12th such phase in 2016 according to INSIVUMEH) started yesterday morning and seems now to be at its peak. Strombolian-type explosions and/or pulsating lava fountains eject glowing lava to 400 m or more, generating abundant glowing avalanches on the upper cone, and are accompanied by shock waves that can be felt in up to 15 km distance.
Two lava flows of each about 2000 m length are descending the Las Lajas and Santa Teresa gullies on the southeastern flank.

Piton de la Fournaise (La Réunion): Signs that a new eruption of the volcano in the near future could be in the making have been increasing. In a bulletin yesterday, the volcano observatory (OVPF) reported elevated seismic activity, deformation and gas emissions that are consistent with the rise of magma to shallow depths.
The recent seismic unrest began on 13 July; since then, OVPF recorded 163 shallow volcano-tectonic earthquakes (at depths within 2 km below the summit), including two swarms on 19 and 26 July, as well as 226 small collapses and rockfalls in the Dolomieu Crater.
... [read more]... [show less]
Also since 13 July ground inflation at Dolomieu crater (swelling of the edifice caused by magma intrusion) picked up significantly. It currently continues at rates similar to those recorded before the recent eruptions of 2015 and 2016 (rates around 1 mm distance gain / day).
Last, but not least, gas measurements also show significant variations: since 21 July, a moderate increase in the average concentrations of H2S emissions has been detected from the summit - a volcanic gas released earlier than magma itself rises to the surface as the gas is very mobile and not very soluble at low pressure (shallow magma depth). 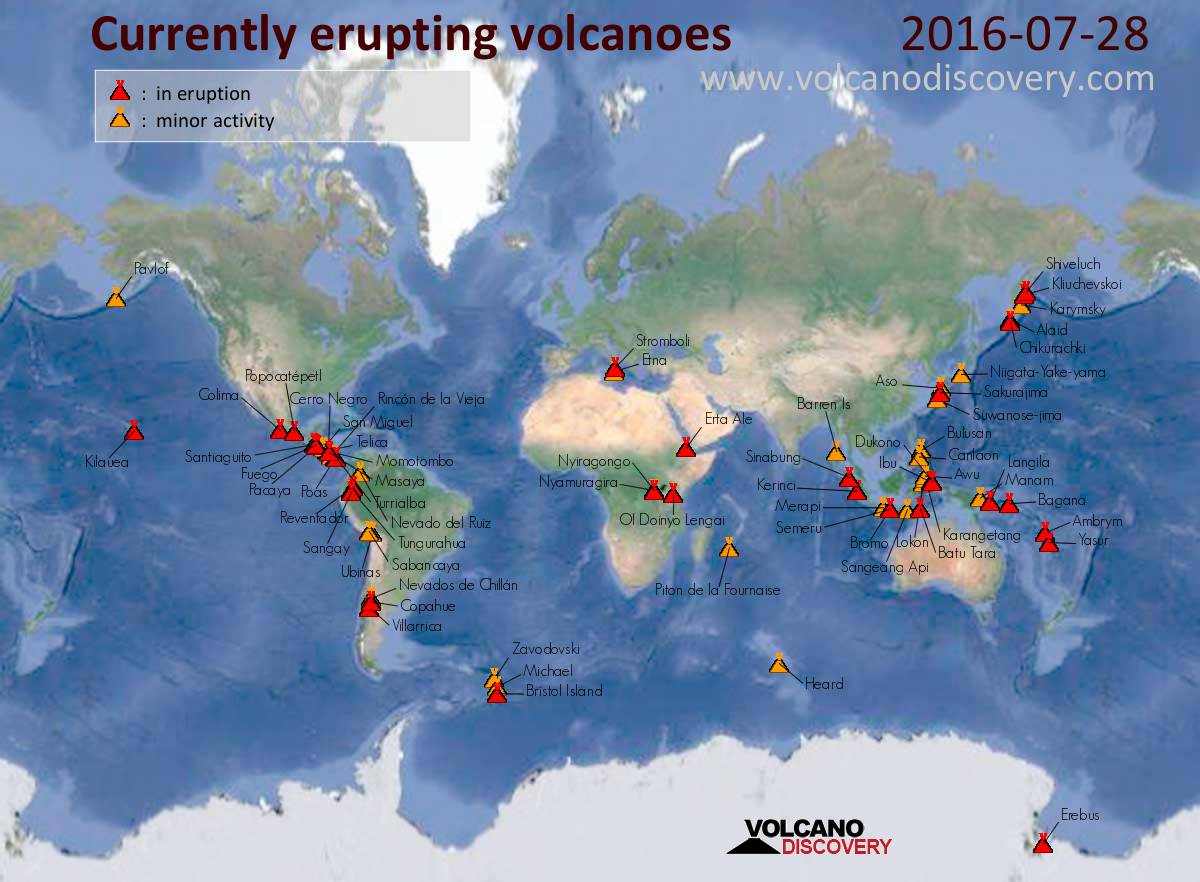 Chikurachki (Paramushir Island): A new eruption was reported by Tokyo VAAC who discovered new ash emissions from the volcano since yesterday morning. The ash plume observed on Himawari 8 satellite imagery rose to estimated 18,000 ft (5.4 km) altitude and drifted over 150 km to the NE passing the southern part of the Kamchatka peninsula. ... Read all
Wed, 27 Jul 2016, 21:00 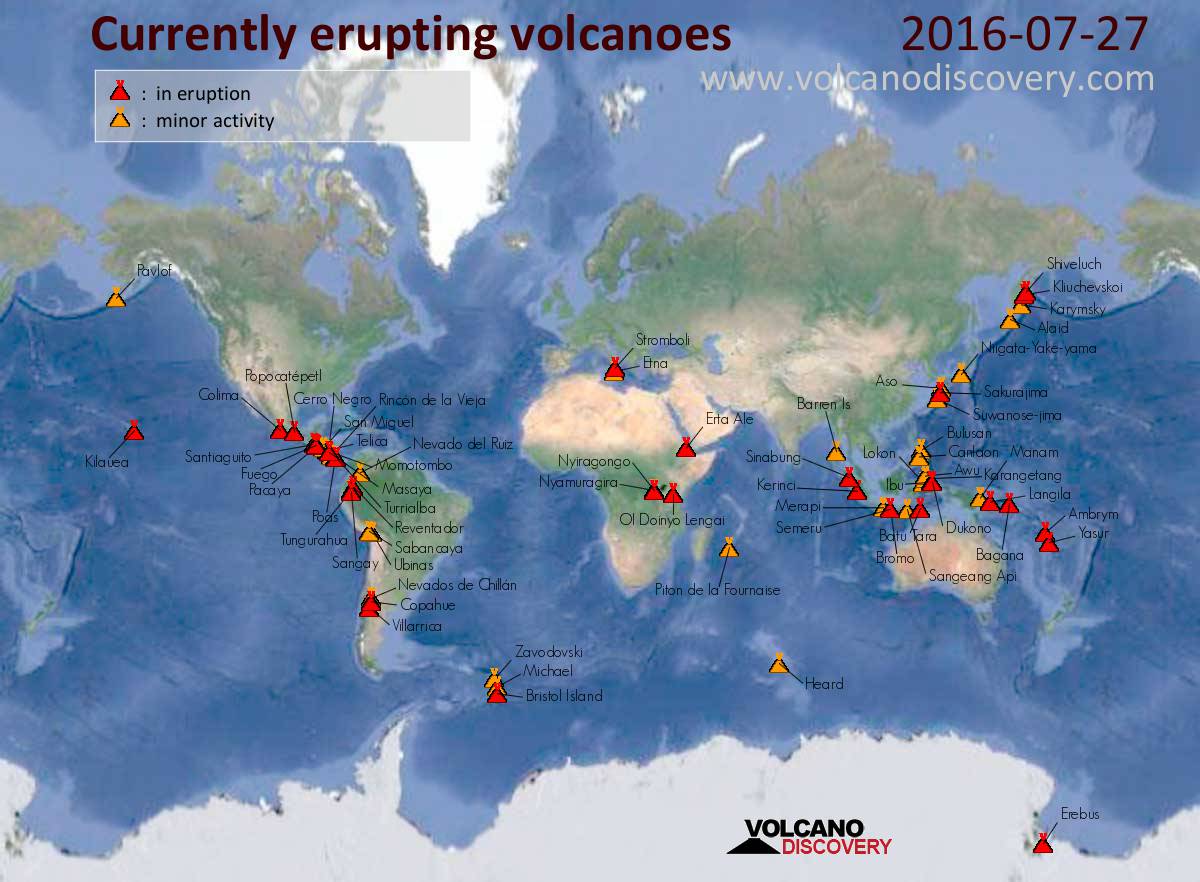 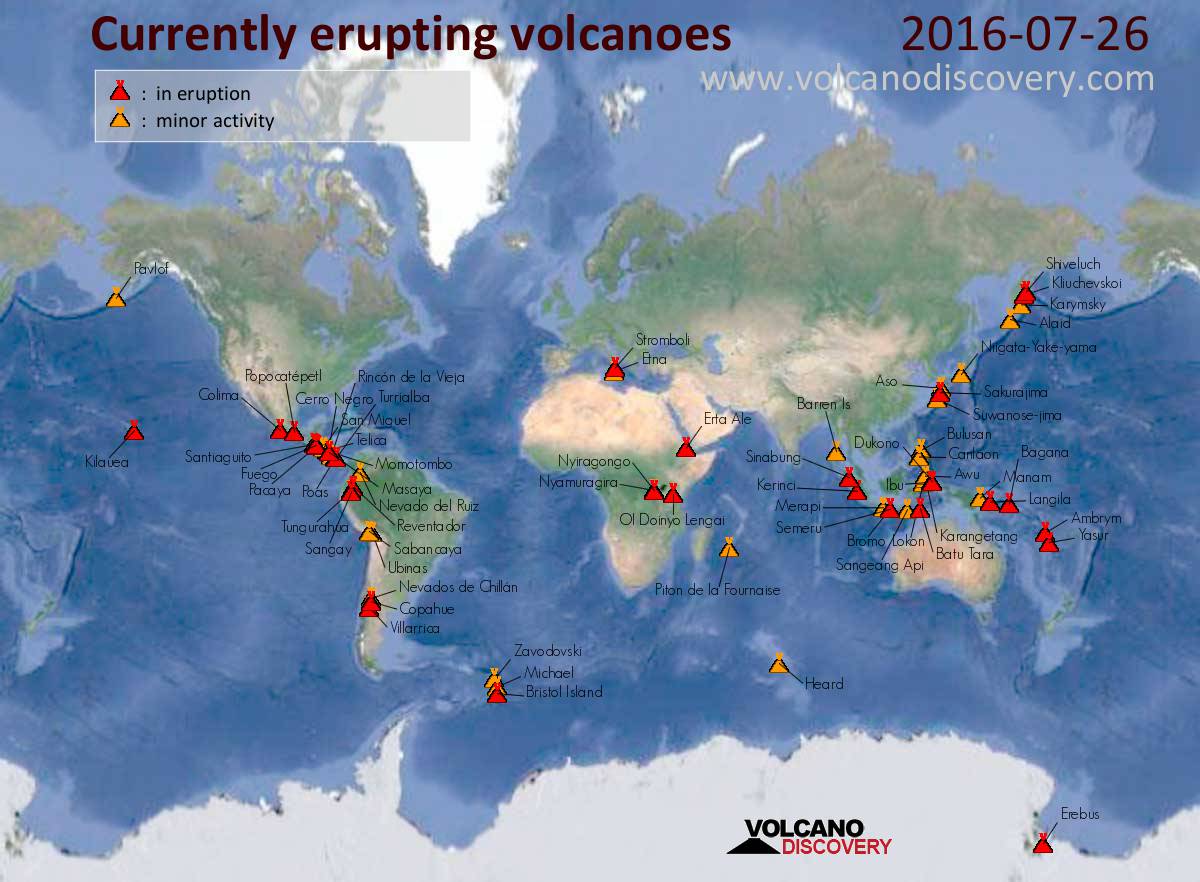 Kilauea (Hawai'i): (26 Jul) Over the weekend, the lava flow in the coastal flat had advanced significantly, bringing the closest lava flow front to only 370 m distance from the coast as of Monday morning (Hawaiian time). Chances to see lava entering the sea in the coming days or weeks are increasing with each day. ... Read all
Mon, 25 Jul 2016, 16:56 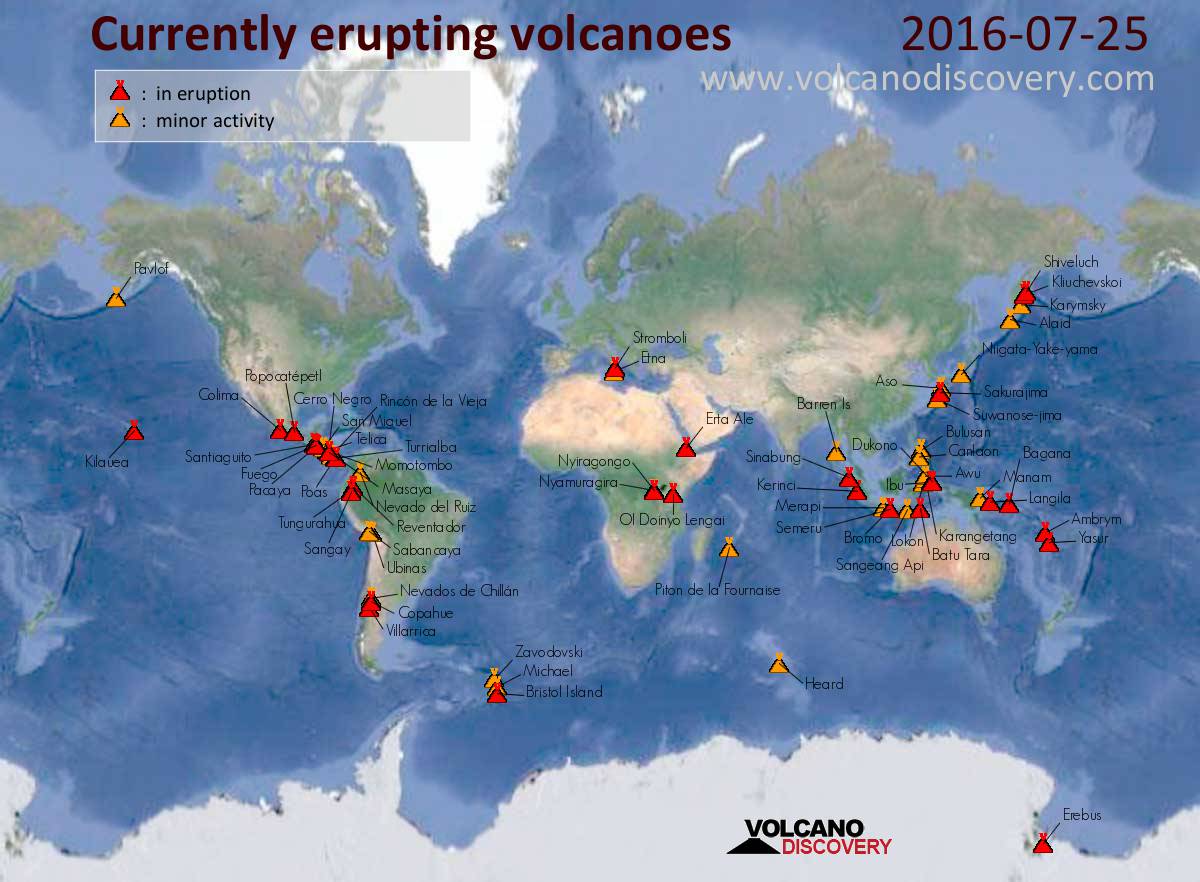 Kliuchevskoi (Kamchatka): The volcano continues to erupt a lava flow that descends on the eastern flank. It also sometimes (such as during much of yesterday) has phases of near-continuous explosions at the summit craters, generating ash plumes that rise up to approx. 1 km from the summit. Today, no significant ash emissions were observed. ... Read all
Show more
Thu, 21 Jul 2016, 16:06 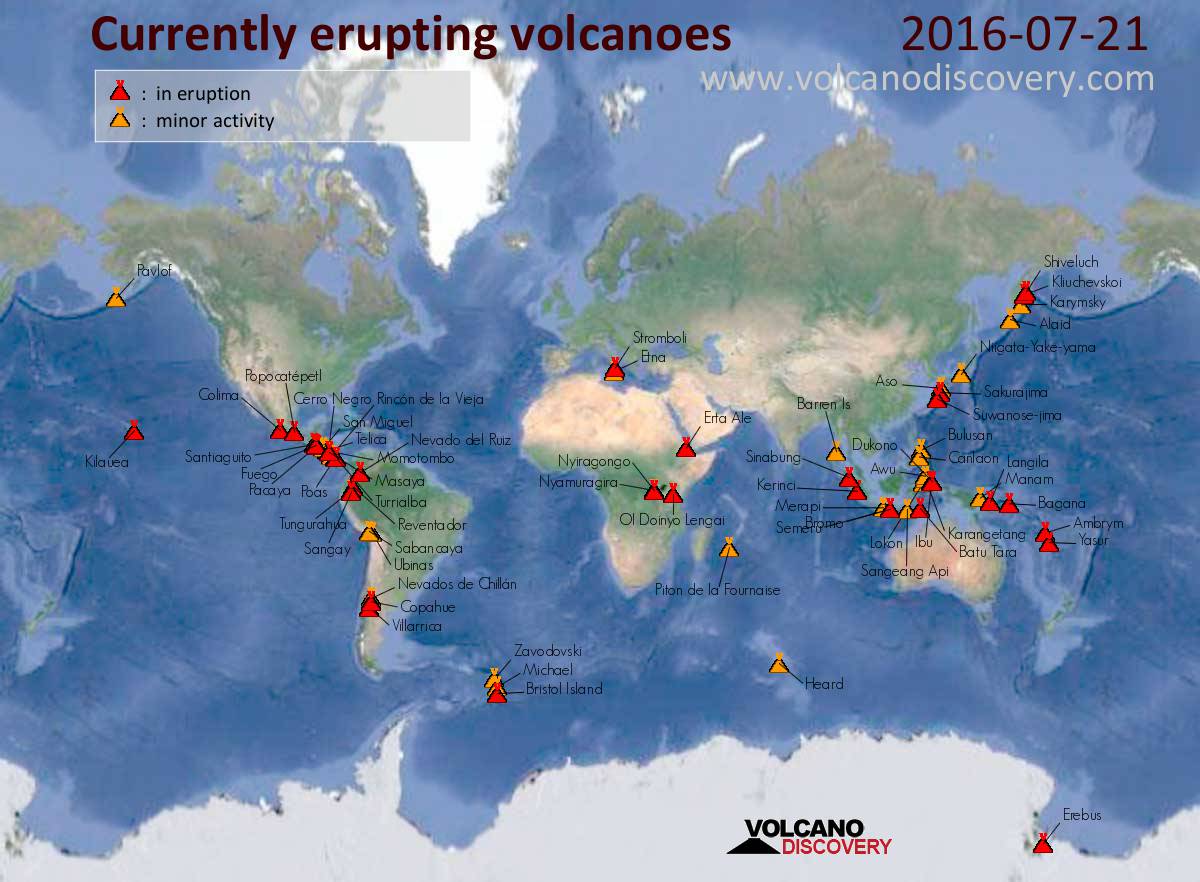 Etna (Sicily, Italy): The volcano remains calm at the surface but is restless. Its internal seismic activity continues to be higher than normal and SO2 gas emissions have increased a bit recently (to approx. 7,000 tons/day), which could indicate the influx of fresh magma. ... Read all
Tue, 19 Jul 2016, 21:00 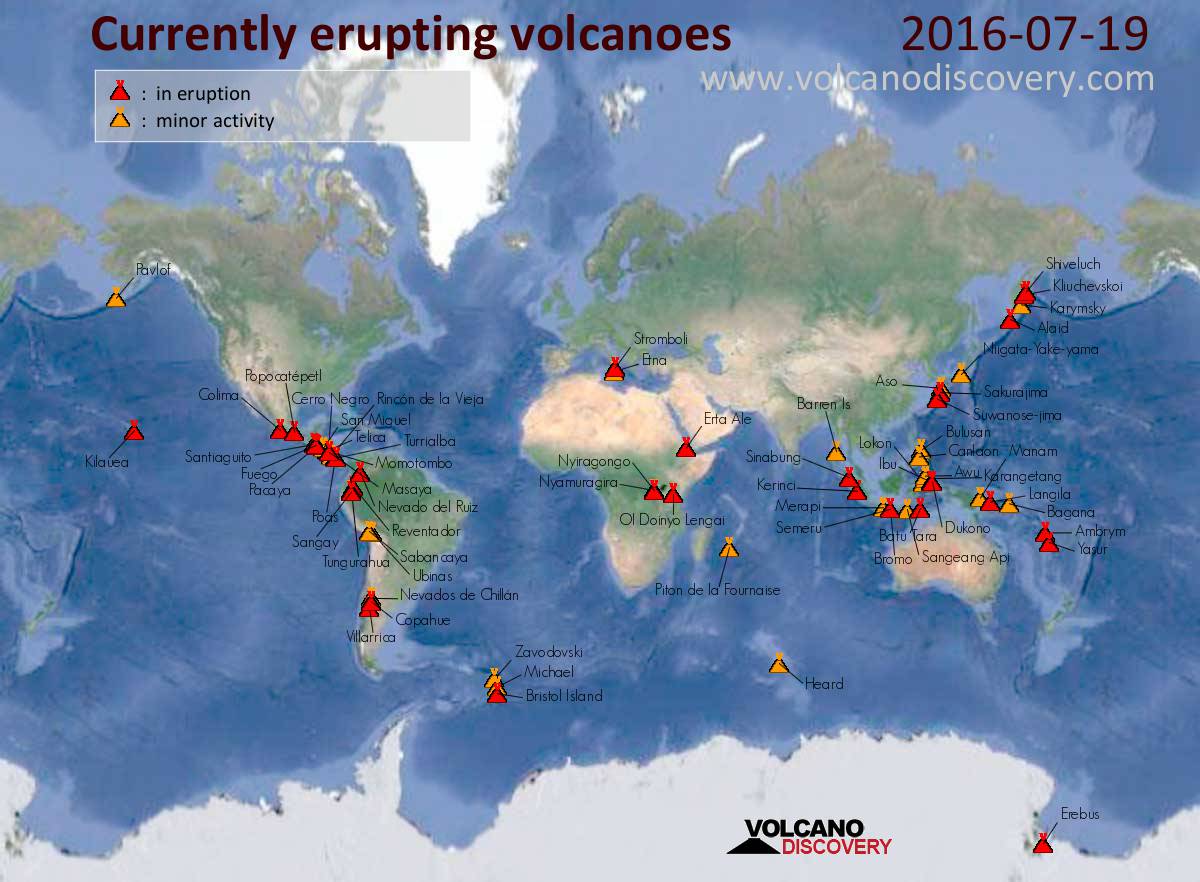 Kilauea (Hawai'i): The so-called "61G lava flow" southeast from Pu'u 'O'o extending into the coastal flat remains active, but most activity in the past days continued to enlarge and inflate the existing lava flow field. ... Read all
Show more
Mon, 18 Jul 2016, 21:00 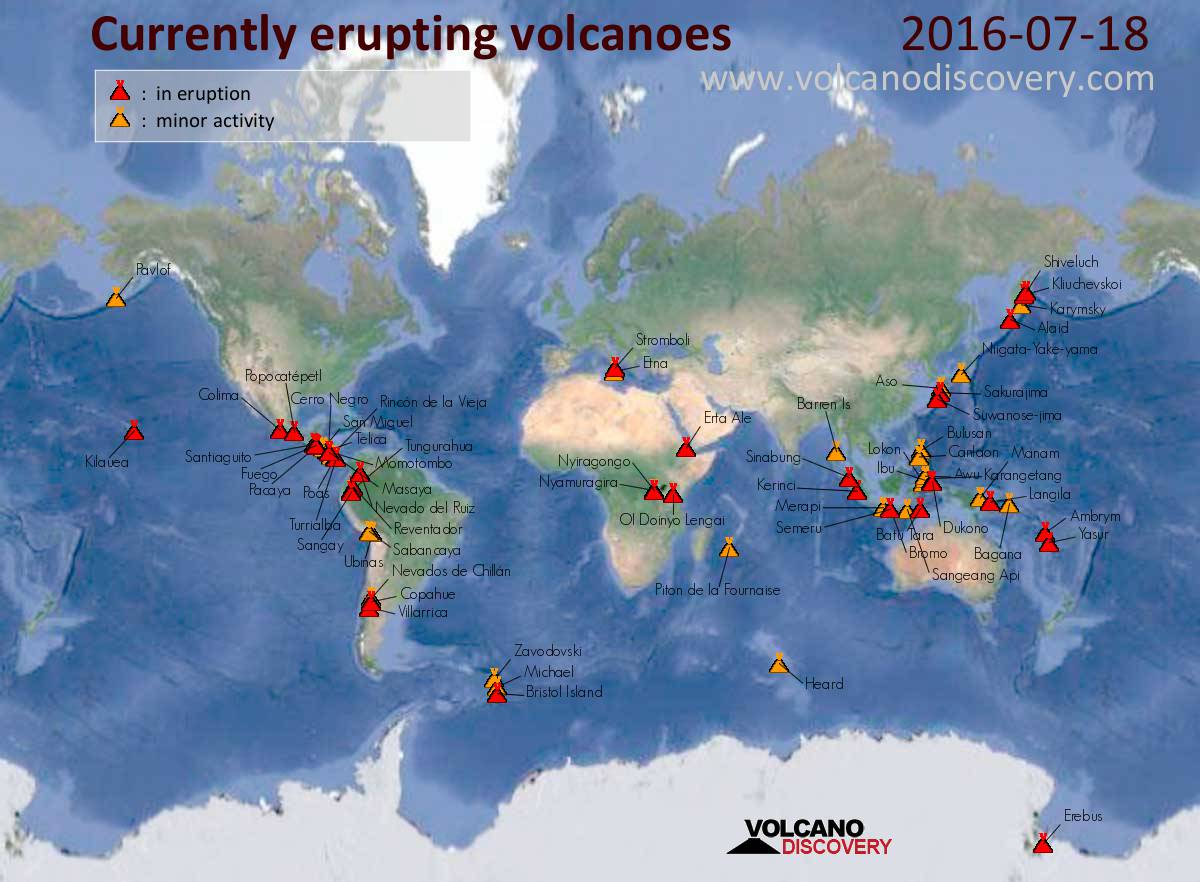 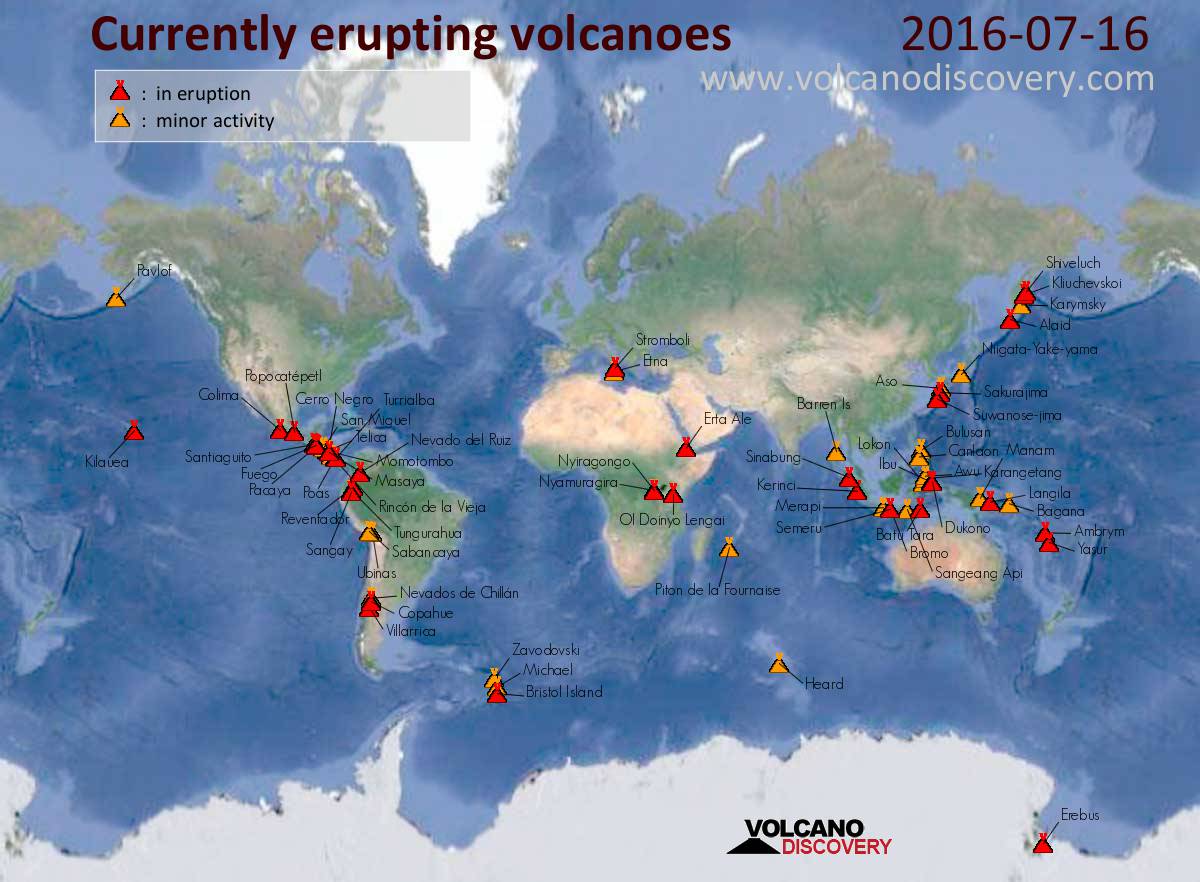 Sinabung (Sumatra, Indonesia): No significant changes have occurred in the ongoing effusive-explosive eruption of the volcano. The slow lava dome growth continues to feed a prominent lava lobe on the upper ESE flank that sheds glowing avalanches. ... Read all
Show more
Wed, 13 Jul 2016, 17:18 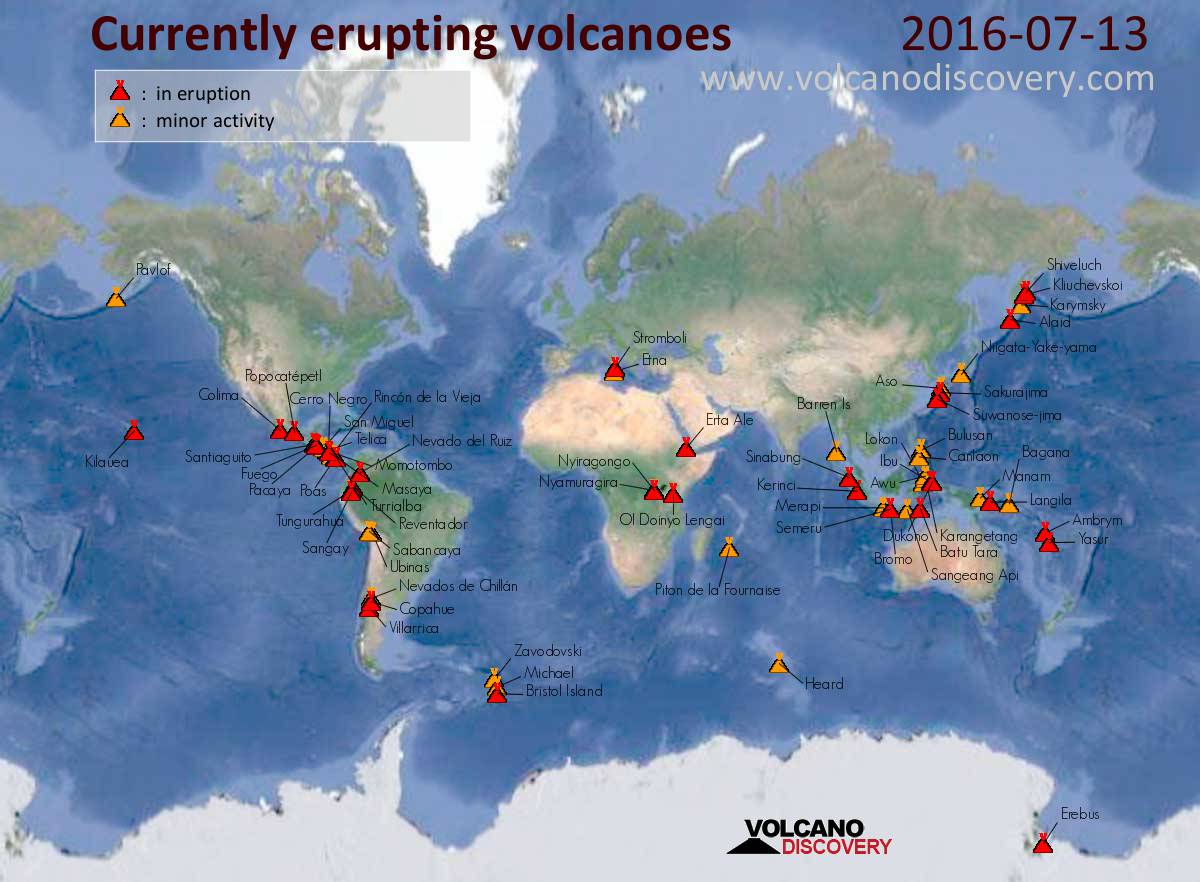 Kliuchevskoi (Kamchatka): The effusive-explosive eruption continues with no significant changes. The lava flow on the upper eastern flank remains well alimented while (strombolian) explosive activity has been low during the past days. ... Read all
Tue, 12 Jul 2016, 16:08 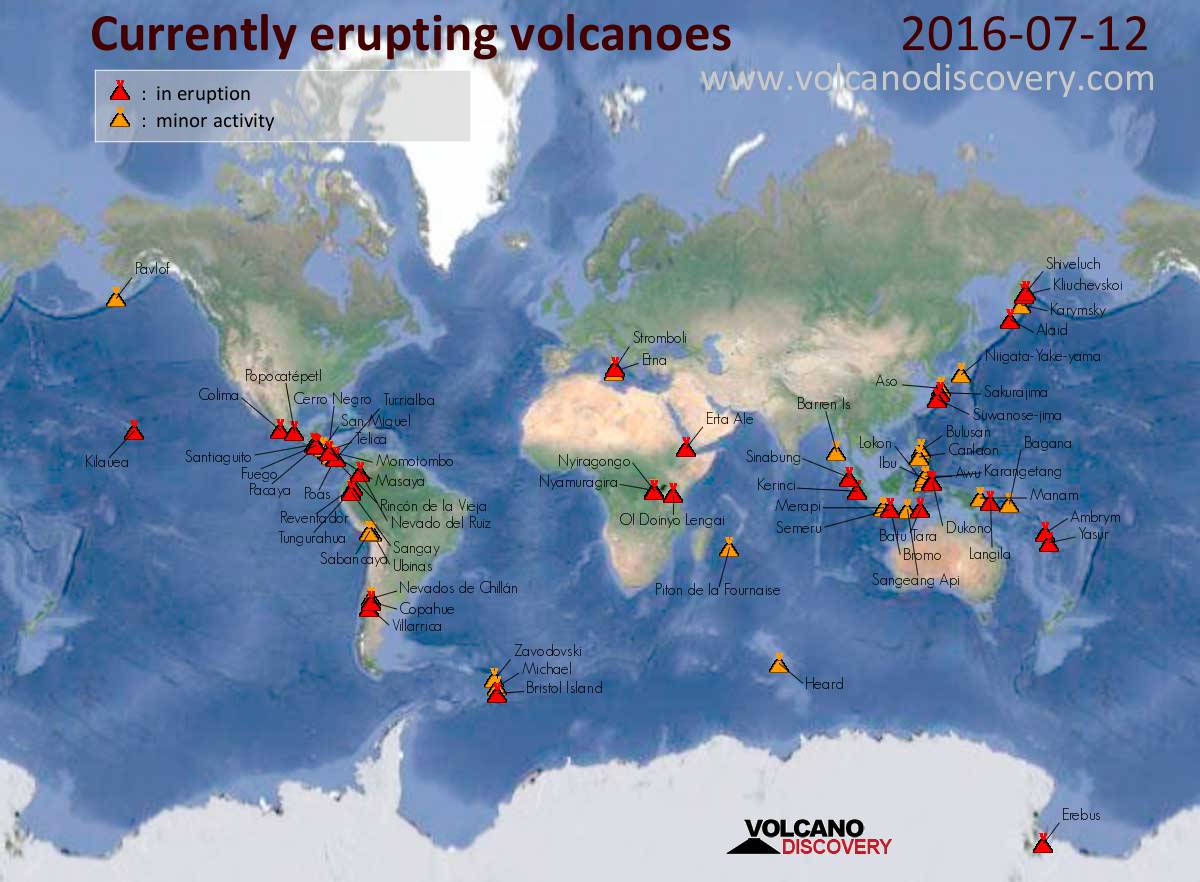 Alaid (Northern Kuriles): The new eruptive phase at the remote volcano which had started around 4 July, after a possible pause in activity, continues with dominantly effusive activity. ... Read all
Watch Volcanoes Live

Land of History
Armenia has an ancient history and rich cultural heritage to discover. Find true hospitality on unbeaten paths and discover its spectacular geology that shaped dramatic landscapes, hike to hidden century-old monasteries, walk through deep gorges cut into old lava plateaus, wander about on alpine meadows full of flowers, and enjoy superb fresh food... Join us on a relaxed relaxed geotour to one of our best destinations!
Iceland
30 Jul-16 Aug 2021

Colors of Iceland
Discover Iceland's fascinating geology and volcanic activity on this relaxed photo and geo tour! Get to see the new volcanic eruption on the Reykjanes peninsula from close!
Raung

Raung volcano photos
One of the largest and most active volcanoes in East Java, rarely-visited and relatively unknown Raung became (in)famous during its recent eruption in 2015 when its frequent ash plumes forced the repeated closure of Bali's airport.
Lava lakes