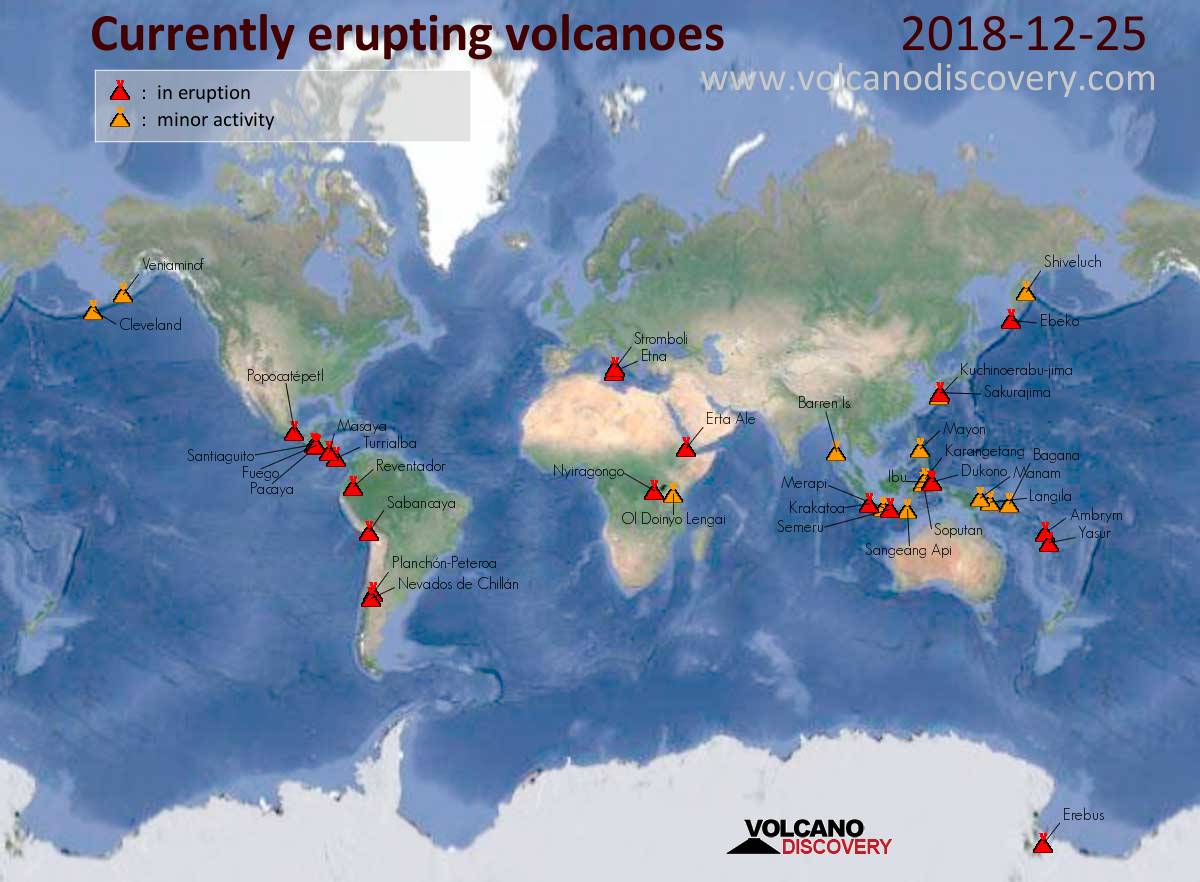 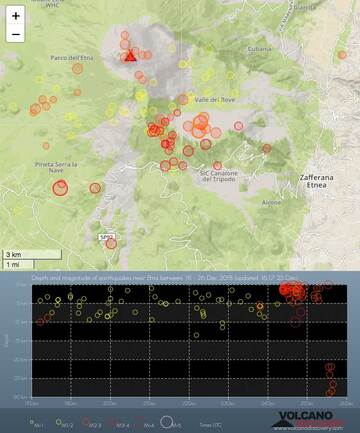 Earthquakes under Etna volcano during the past 7 days 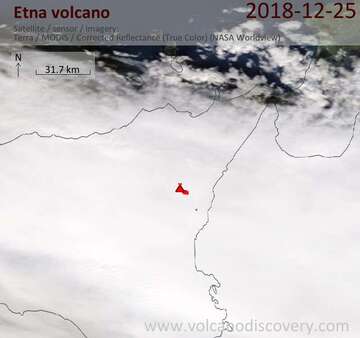 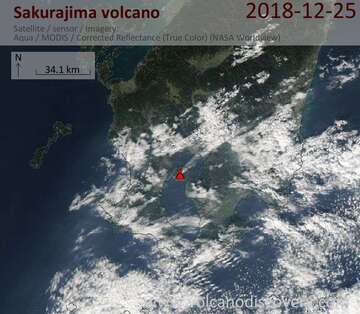 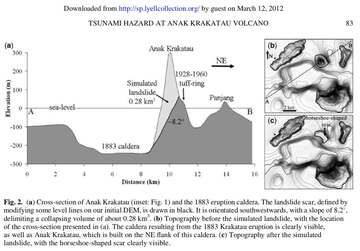 Exaggerated cross section and bathymetry of the Krakatau caldera, showing the flank collapse modeled in 2012 (image: Giachetti et al, 2012)
Etna (Sicily, Italy): Bad weather has mostly prevented clear sights of the new flank eruption today, but it seems that while it is still going on, lava emission from the new fissure vent high in the Valle del Bove that opened yesterday has decreased.
The area remains obscured in clouds, but thermal cameras show continuing activity from the Bocca Nuova crater.
Seismic activity remains elevated, showing that the eruption is certainly not over and still evolving: the recent earthquake swarm continues (albeit at decreased intensity) with approx. 20 earthquakes with magnitudes between 2 and 3.4 having been detected during the past 24 hours. Most quakes were at shallow depth in the SE sector of the volcano.
...25 Dec:
Volcanic Ash Advisory Center Toulouse (VAAC) issued the following report: ASH EMISSION HAS DIMINISHED OBS VA DTG:25/1500Z
...25 Dec:
Volcanic Ash Advisory Center Toulouse (VAAC) issued the following report: STARDTED AT 20181224/1115Z OBS VA DTG:25/0300Z
...24 Dec:
Our Etna specialist Emanuela climbed Etna earlier today, witnessing the onset of the new flank eruption in the upper Valle del Bove.
You can find the images in this gallery.

Krakatoa (Sunda Strait, Indonesia): Sometimes, science has already answers for tragic events, but their voice is not heard or underestimated at the time. The Indonesia tsunami disaster two days ago is such an example: What happened on 22 Dec 2018 had actually already been described and warned about for years in amazing detail:
In January 2012, scientist around volcanologist Dr Thomas Giachetti from the University of Oregon published results of numerical modelling simulating a flank collapse and associated tsunami at Anak Krakatau island and warned about the devastating effects it would have on nearby coasts:
... [read more]... [show less]
In their paper adequately called "Tsunami hazard related to a flank collapse of Anak Krakatau Volcano, Sunda Strait, Indonesia", they "numerically simulate a sudden southwestwards destabilization of a large part of the Anak Krakatau Volcano, and the subsequent tsunami formation and propagation."
Anak Krakatau island - the intra-caldera complex called "Child of Krakatau" - has been growing rapidly growing since it first breached the surface of the sea in 1928. Since then, in less than 100 years, it built an overlapping cone during several eruptions, the latest being the one that started May 2018 and still continues. What makes the island particularly prone to gravitational flank failure is that it has been constructed close and above a steep submarine slope, the NE margin of the caldera basin left by the massive 1883 eruption. 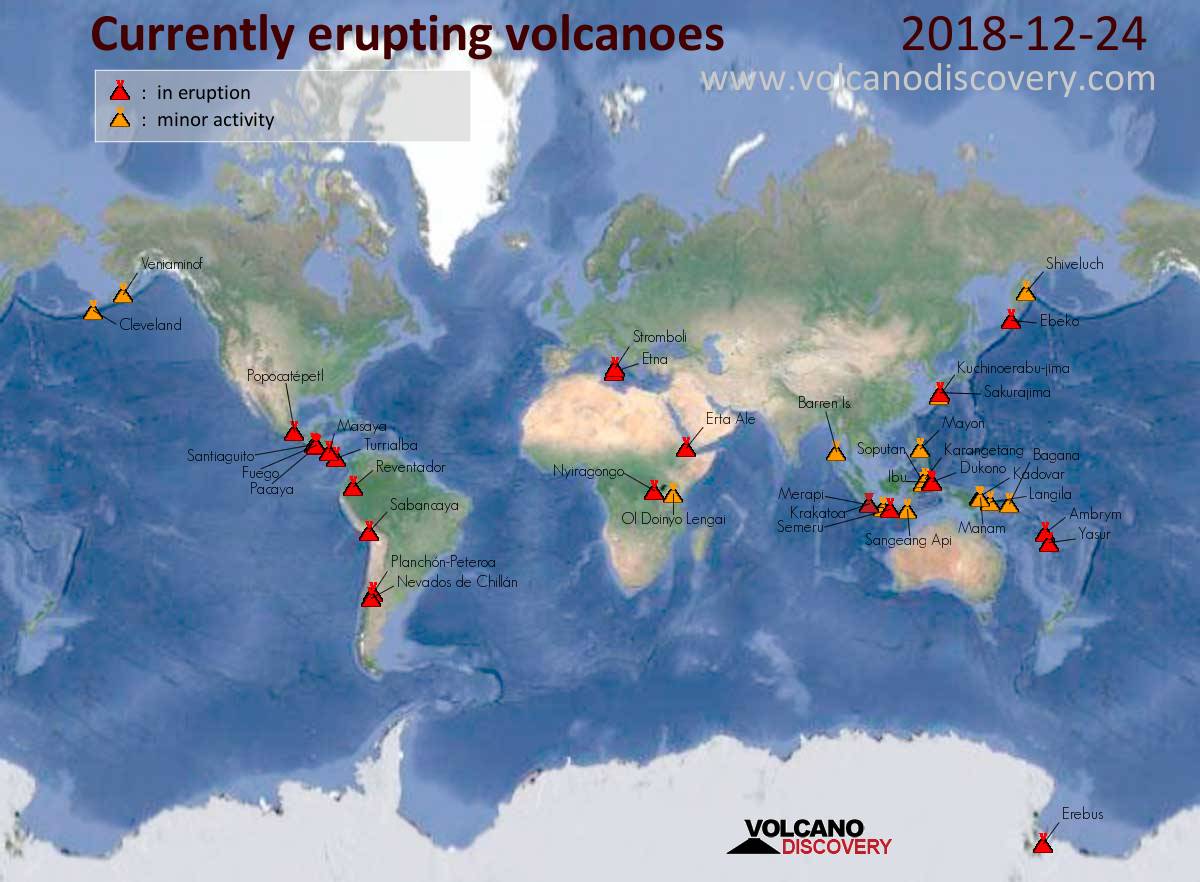 Etna (Sicily, Italy): The following video shows the beginning of Etna volcano's new flank eruption, starting around noon on 24 Dec 2018: a series of quakes accompanies the progressive opening of several fractures, accompanied by strong ash emission, on and below the SE crater. ... Read all
Sun, 23 Dec 2018, 21:00 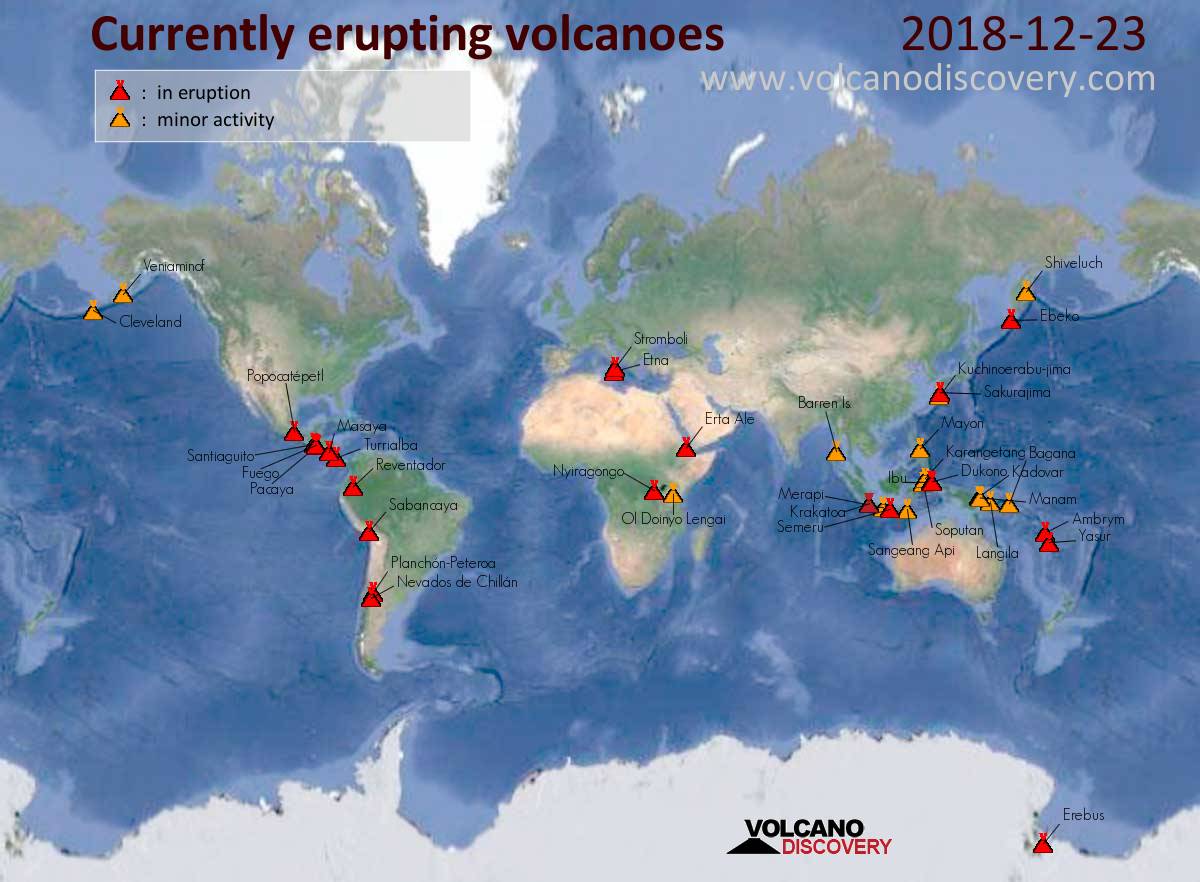 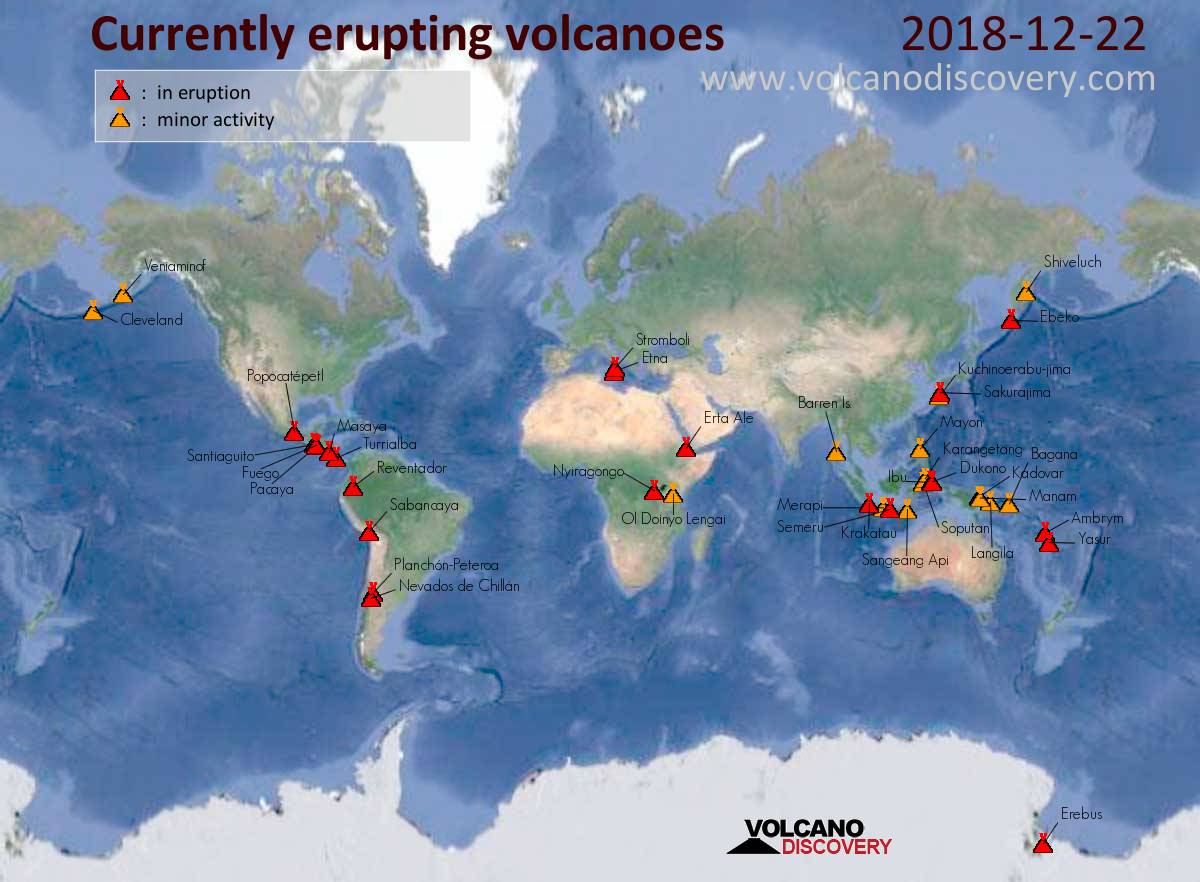 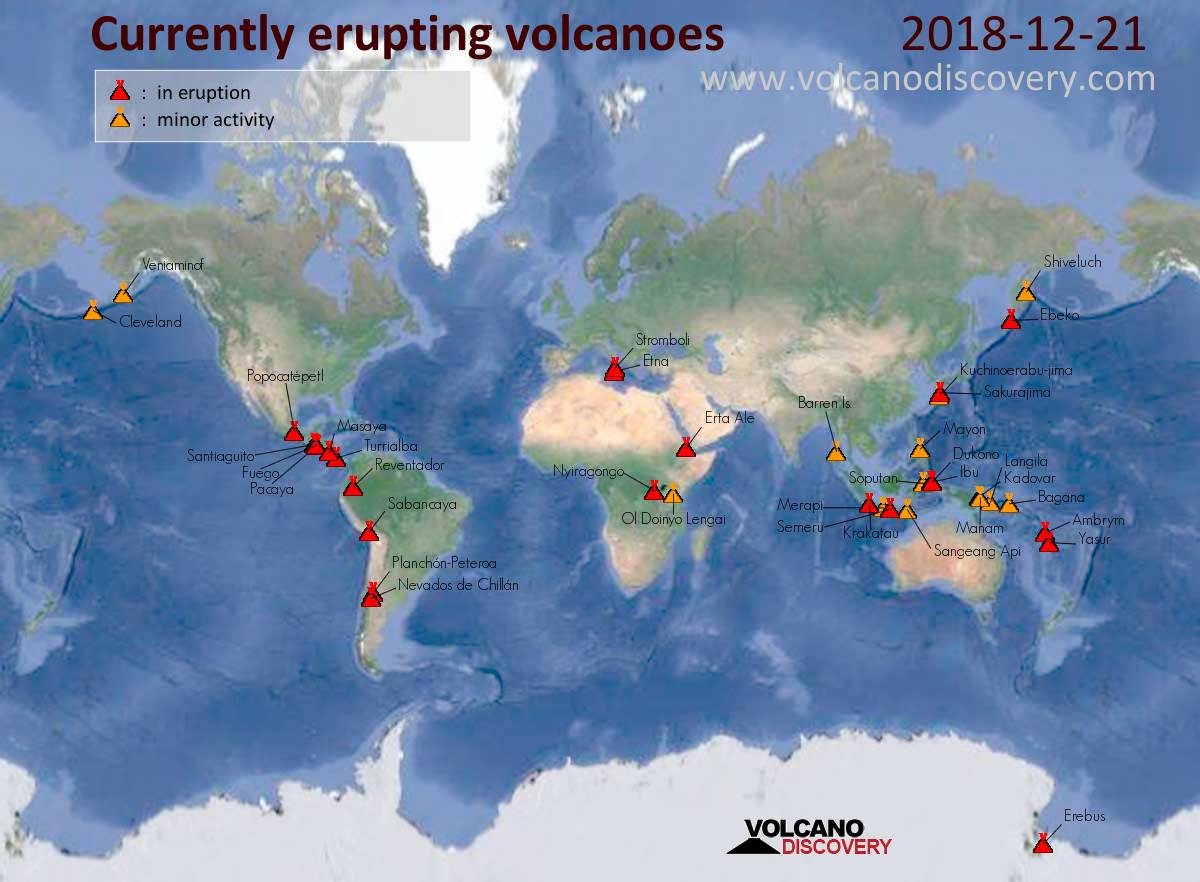 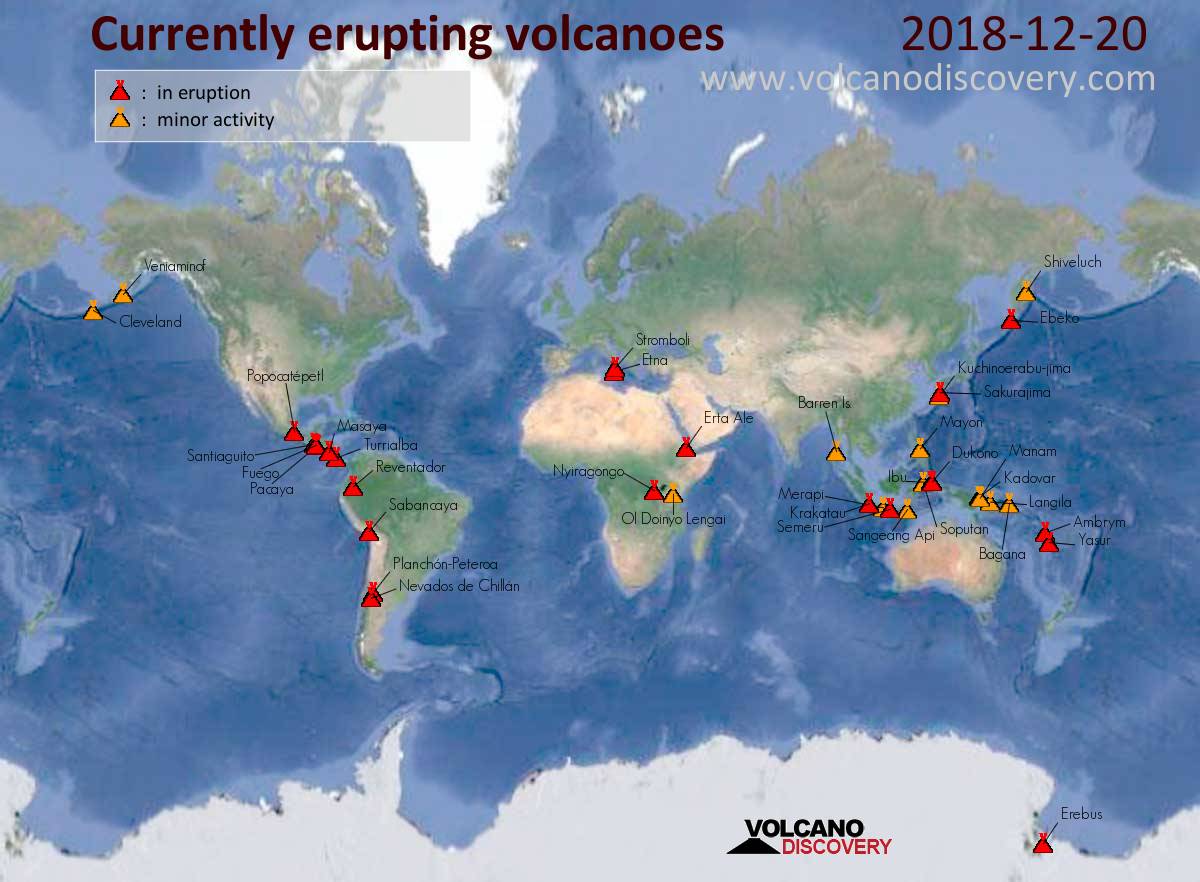 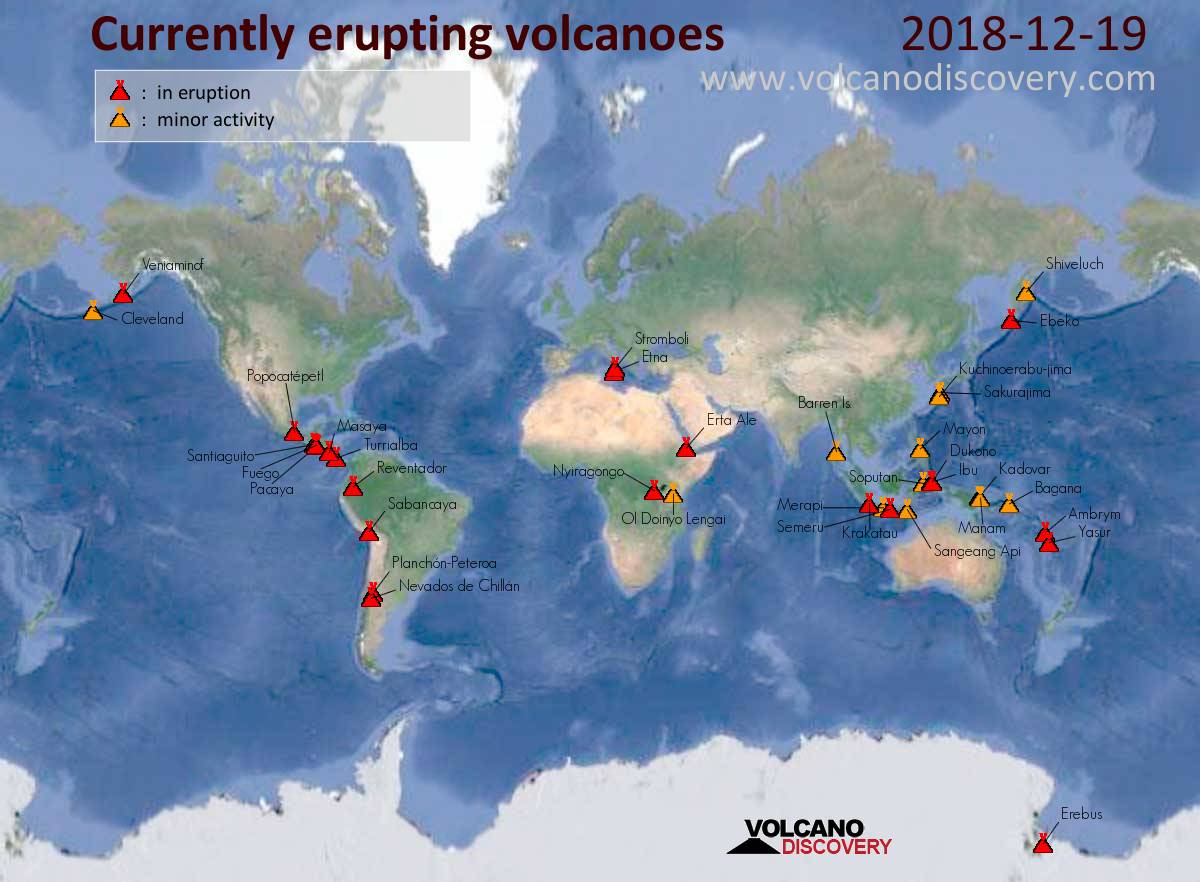 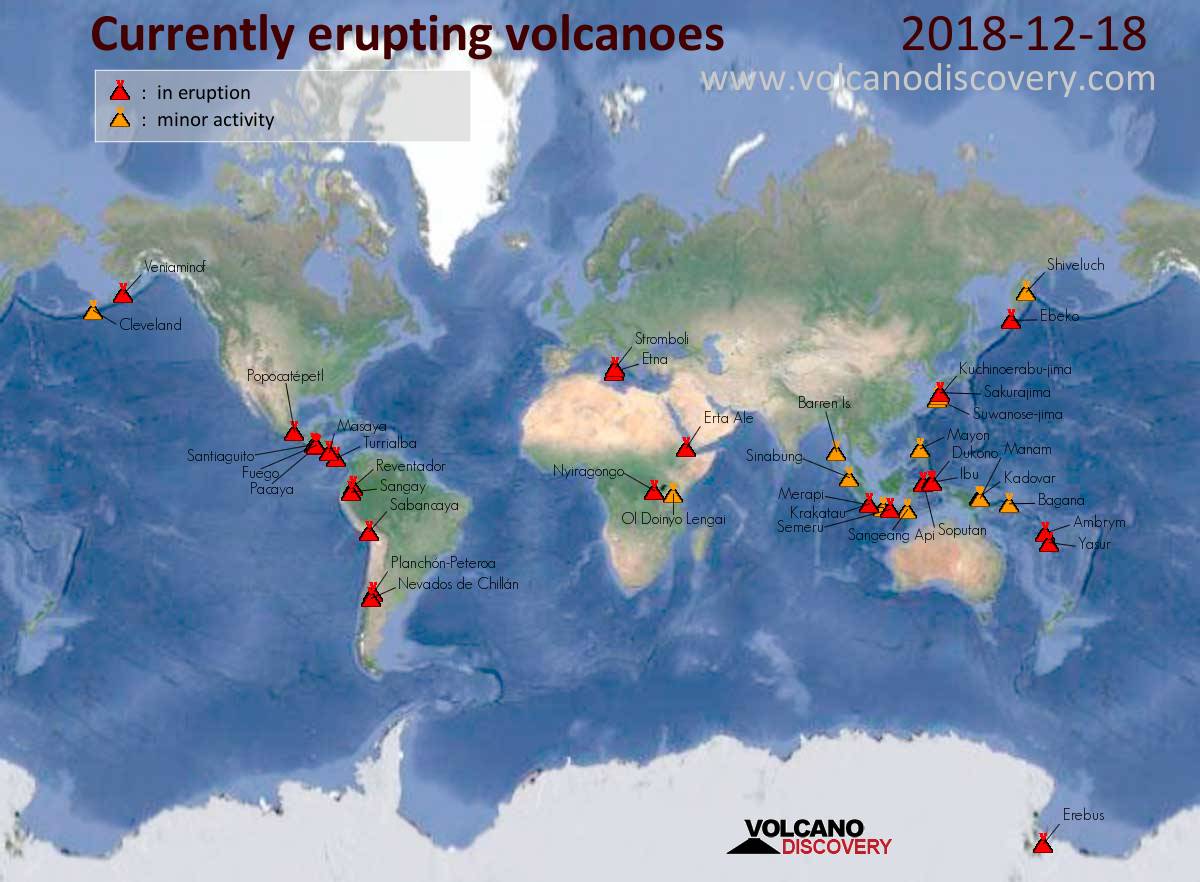 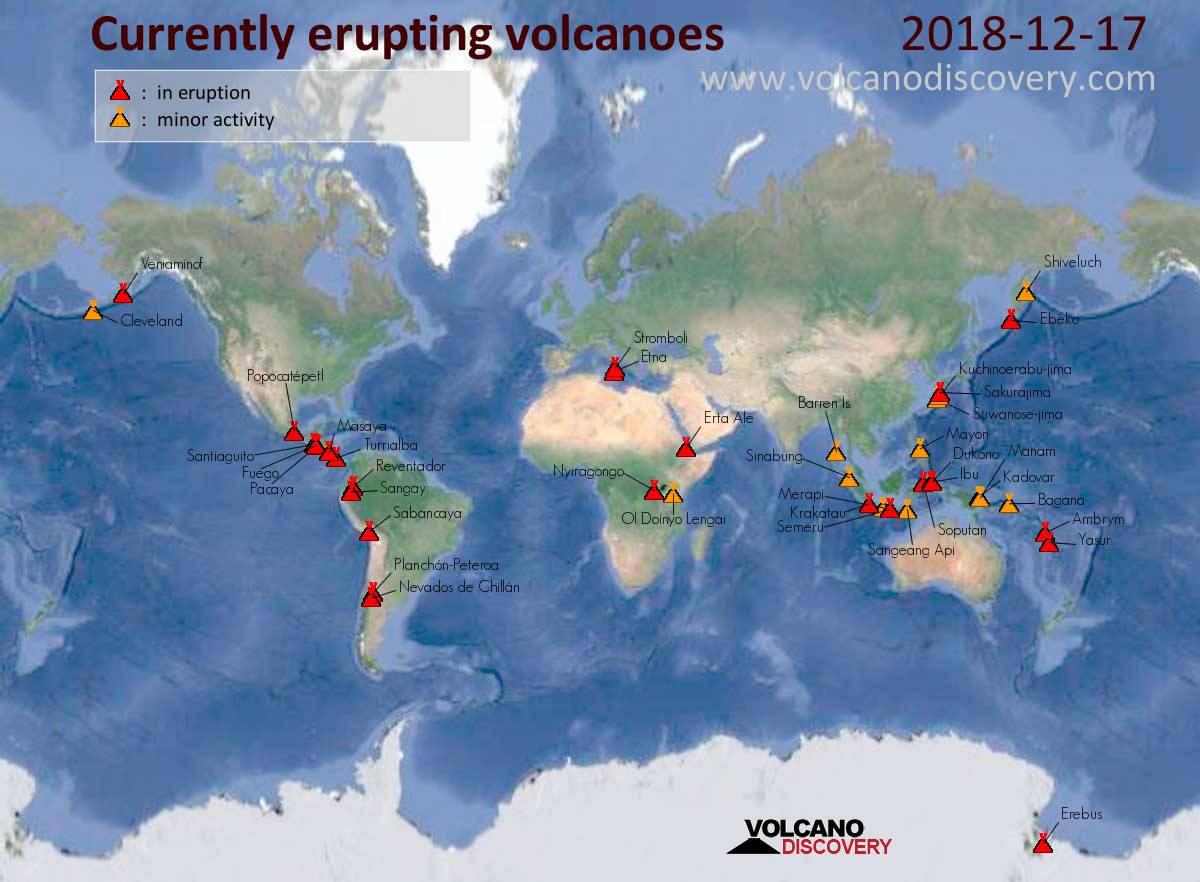 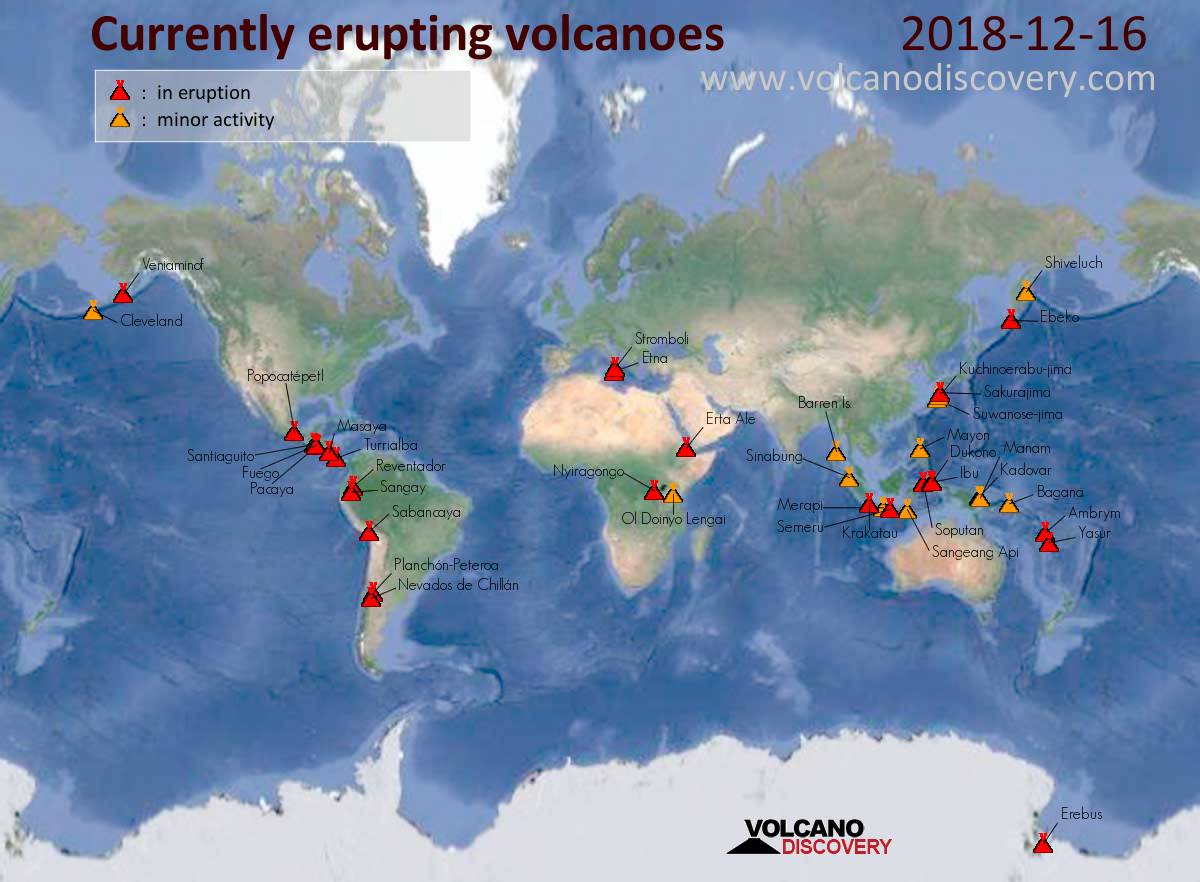 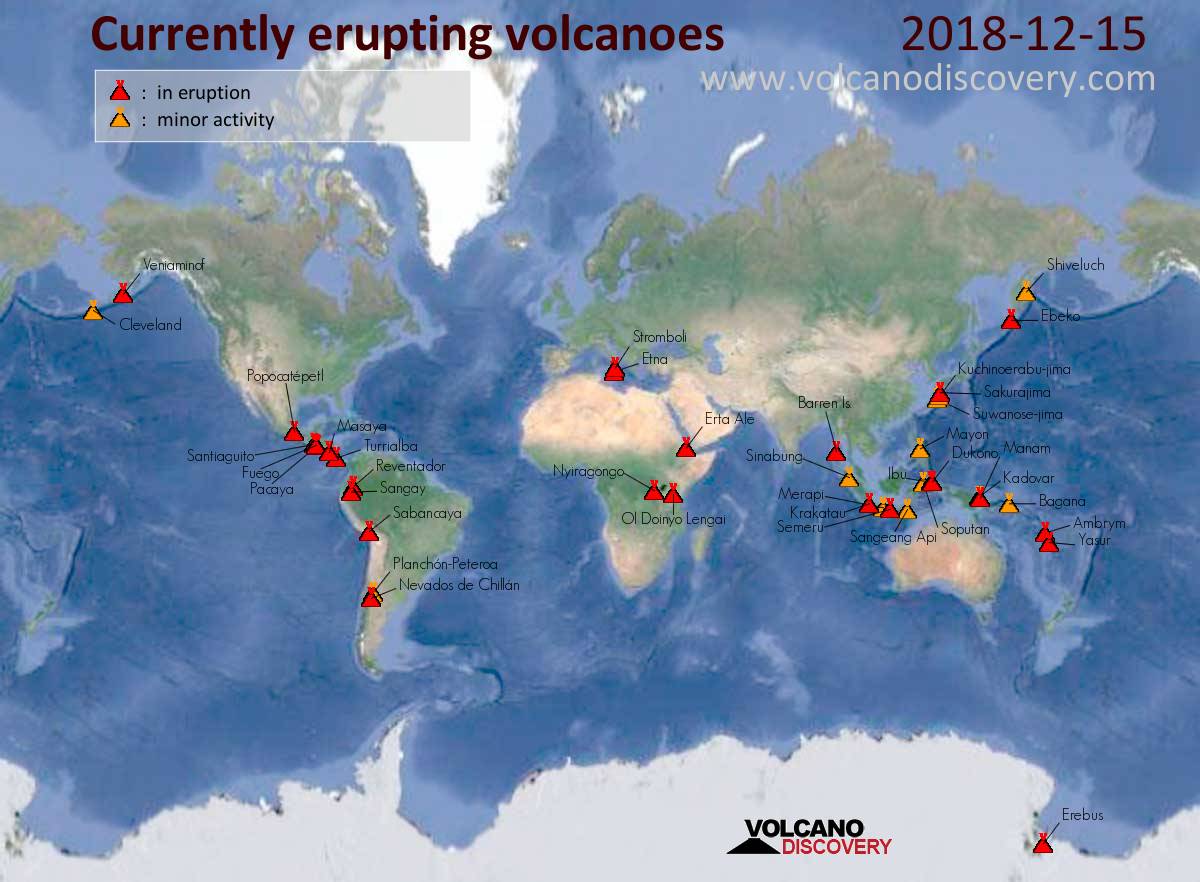 Photos from Armenia
Armenia is a very photogenic country with a large variety of landscapes showing some very spectacular geology, century-old monasteries and castles, and much more.
Volcano Calendar 2016

Volcano Expeditions
Witnessing a volcanic eruption from close is an unforgettable experience. We offer a wide variety of tours and expeditions to active volcanoes worldwide.
Etna Discovery

Etna trekking tour
A tour entirely dedicated to Etna, the most active volcano in Europe. Spend 6 full days on Etna and get good chances to see eruptive activity.
Dukono

Dukono volcano photos
Dukono on Halmahera in Indonesia has been in permanent activity for years, often producing ash plumes that drift around the northern part of the island and have become normality.
Get the ad-free version!
Why is there advertising on this site?