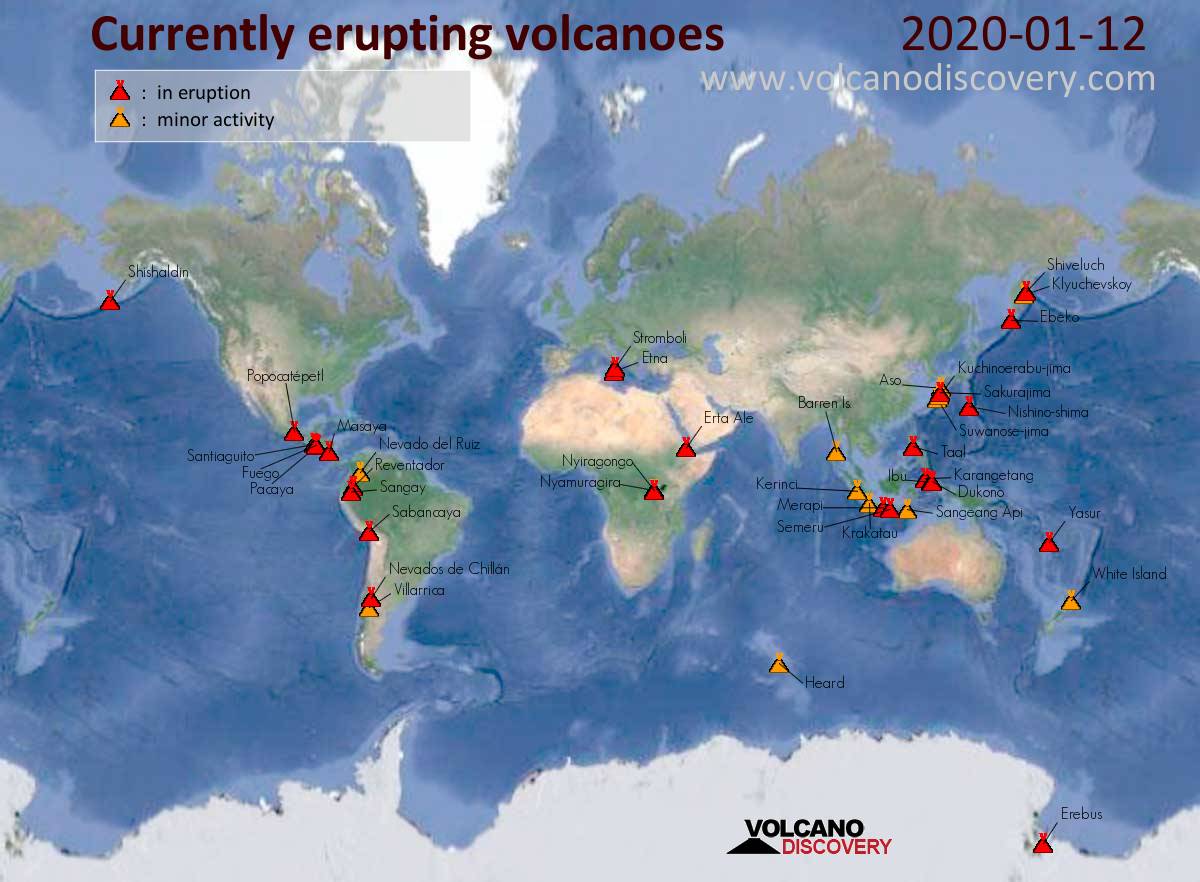 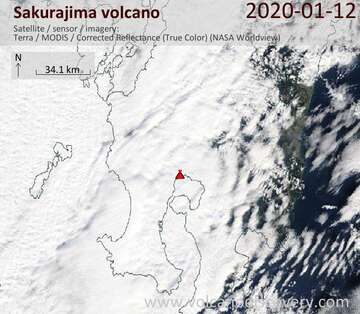 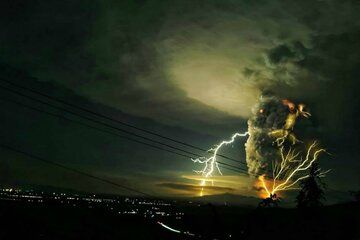 Spectacular view of the eruption from Batangas. Credit: Domcar Lagto 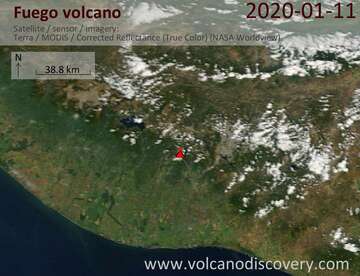 Taal (Luzon, Philippines): Volcanic Ash Advisory Center Darwin (VAAC) issued the following report: VA EMISSIONS CONTINUING OBS VA DTG:12/1500Z
...12 Jan:
Taal is erupting for the first time since 1977, and has sent a steam-and-ash plume to 16.8km (55,000ft), accompanied by a lot of lightning. PHIVOLCS has raised the Alert Level to 4 on a scale of 0-5. It is currently unknown whether the eruption is phreatic or phreatomagmatic.

Taal is an extremely dangerous volcano that has the potential to produce massive base surges and tsunami waves in the lake, as in the last major eruption in 1965; there is a 14km exclusion zone around the main crater in place.


Numerous flights have been cancelled and significant widespread ashfall (described as a "brownout") is causing much disruption, with power outages reported.

Mauna Loa (Big Island, Hawai'i): During the past week, HVO seismometers recorded 56 small magnitude earthquakes beneath the upper elevations of the volcano. Most earthquakes occurred at shallow depths of less than 5 km (~3 miles) beneath the volcano.

Gas concentrations at the Sulphur Cone monitoring site on the Southwest Rift Zone remain stable. Fumarole temperatures as measured at both Sulphur Cone and the summit have not changed significantly.

Kilauea (Hawai'i): The Hawaiian Volcano Observatory (HVO) note that the rates of seismicity over the month of December 2019 were variable but within long term vales. Sulfur dioxide emission rates were low at the summit and were below detection limits at Puʻu ʻŌʻō and the lower East Rift Zone. The pond at the bottom of Halema'uma'u crater, which began forming on July 25, 2019, continues to slowly expand and deepen. As of early January 2020, the dimensions of the pond are 84 meters by 190 meters (280 feet by 620 feet). Current depth is about 23 meters (75 feet).
Over the past month, about a dozen deflation-inflation (DI) events occurred beneath the summit, similar to the prior month. Since early March 2019, GPS stations and tiltmeters at the Kīlauea summit have recorded deformation consistent with slow magma accumulation within the shallow portion of the Kīlauea summit magma system (1-2 km or approximately 1 mile below ground level). However, HVO gas measurements show continuing low levels of sulfur dioxide, consistent with no significant shallowing of magma. Some amount of sulfur dioxide is being dissolved into the summit lake.
... [read more]... [show less]
Farther east, GPS stations and tiltmeters continue to show motions consistent with slowed refilling of the deep East Rift Zone magmatic reservoir in the broad region between Puʻu ʻŌʻō and Highway 130. HVO monitoring data do not suggest any imminent change in volcanic hazard for this area. In addition to motion along the East Rift Zone, the south flank of Kīlauea continues to creep seaward at elevated rates following the May 4, 2018 M6.9 earthquake near Kalapana. HVO continues to carefully monitor all data streams along the Kīlauea East Rift Zone and south flank for important changes. 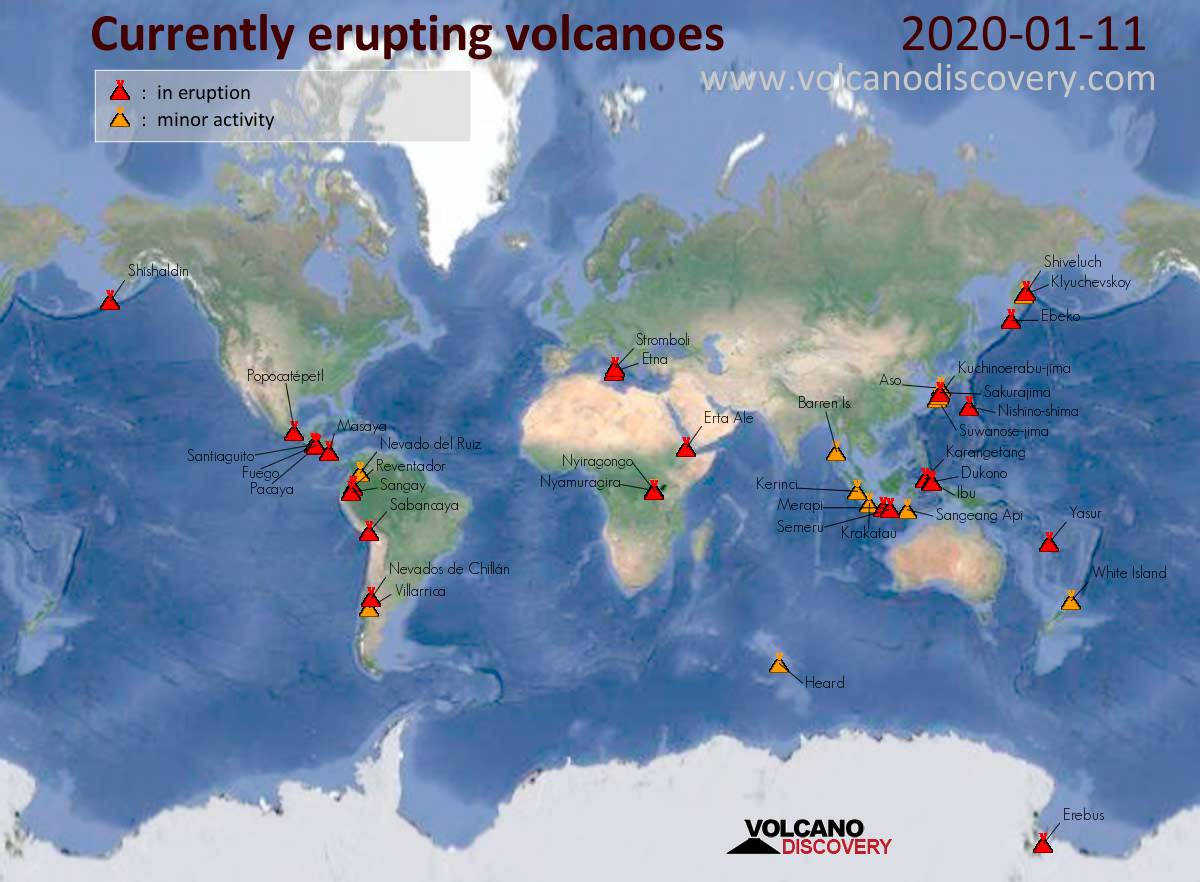 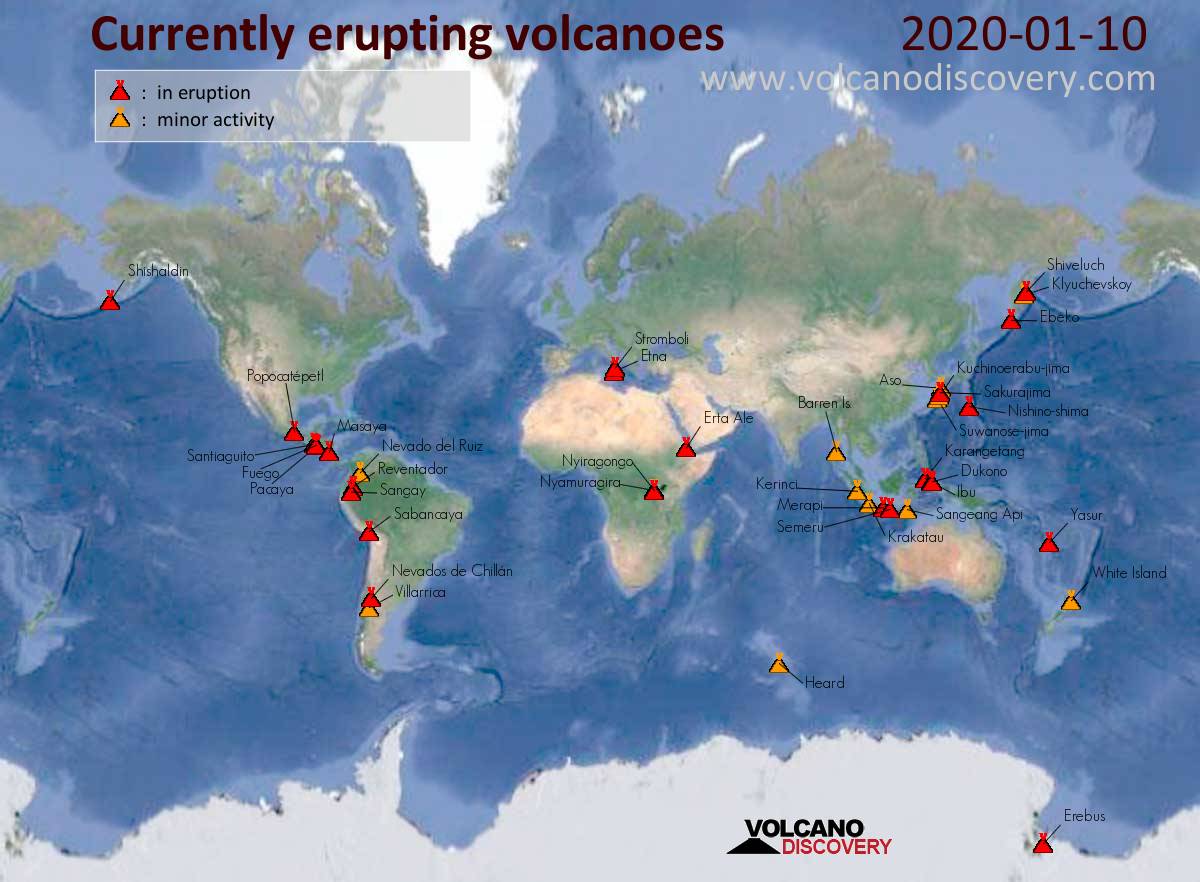 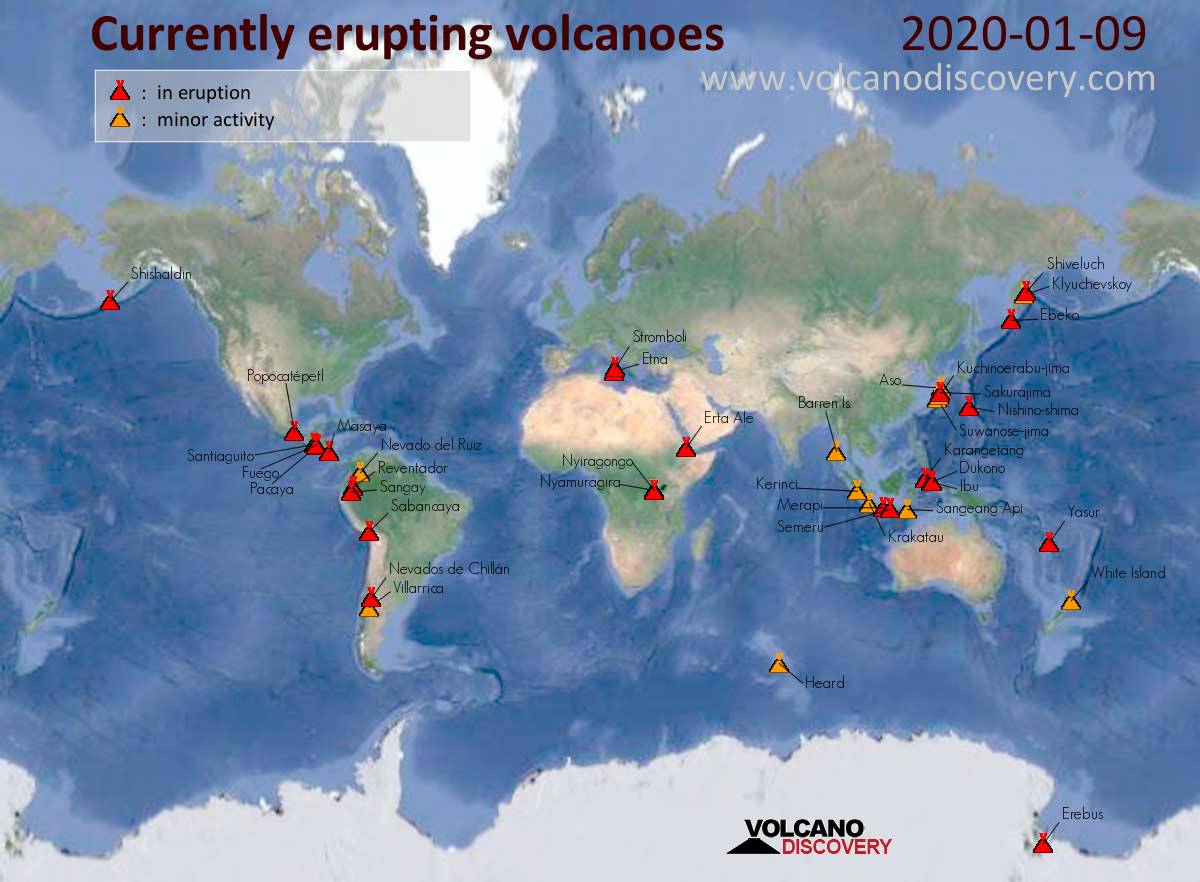 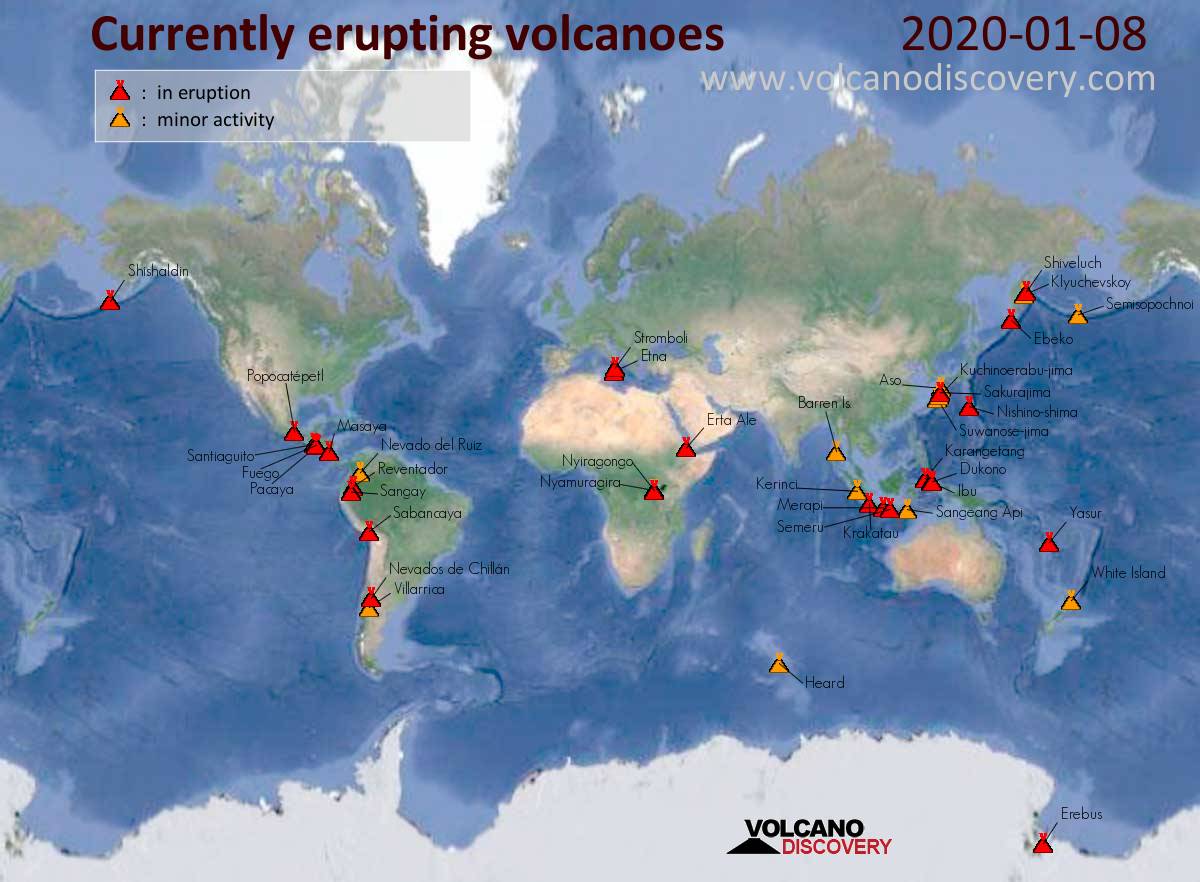 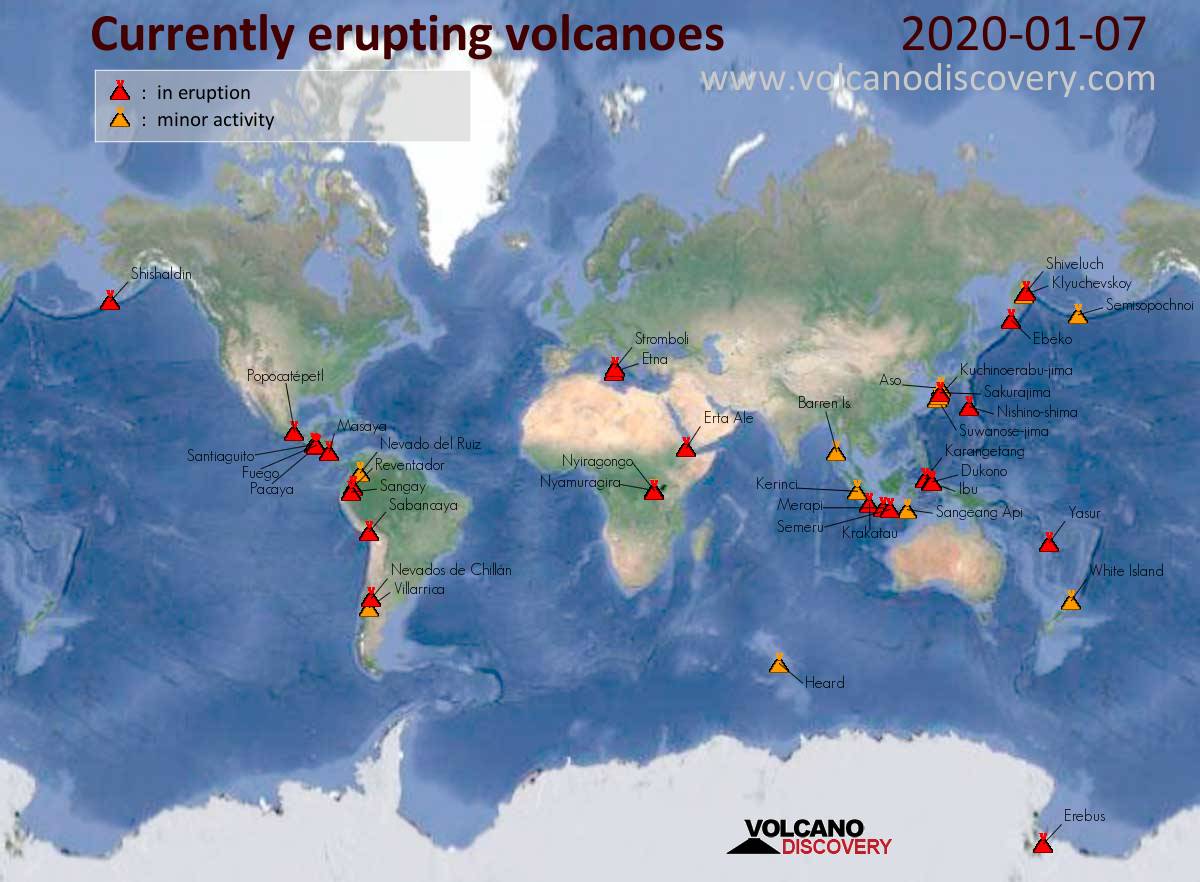 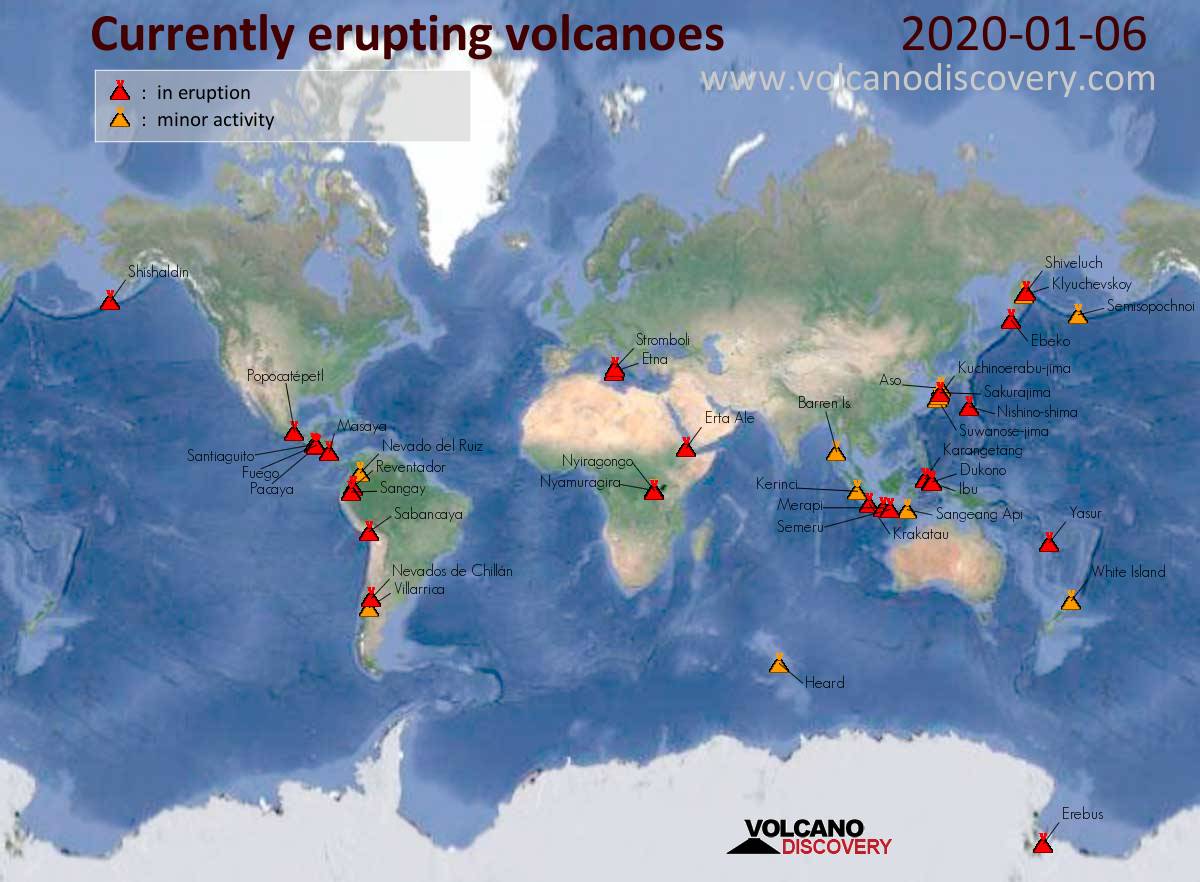 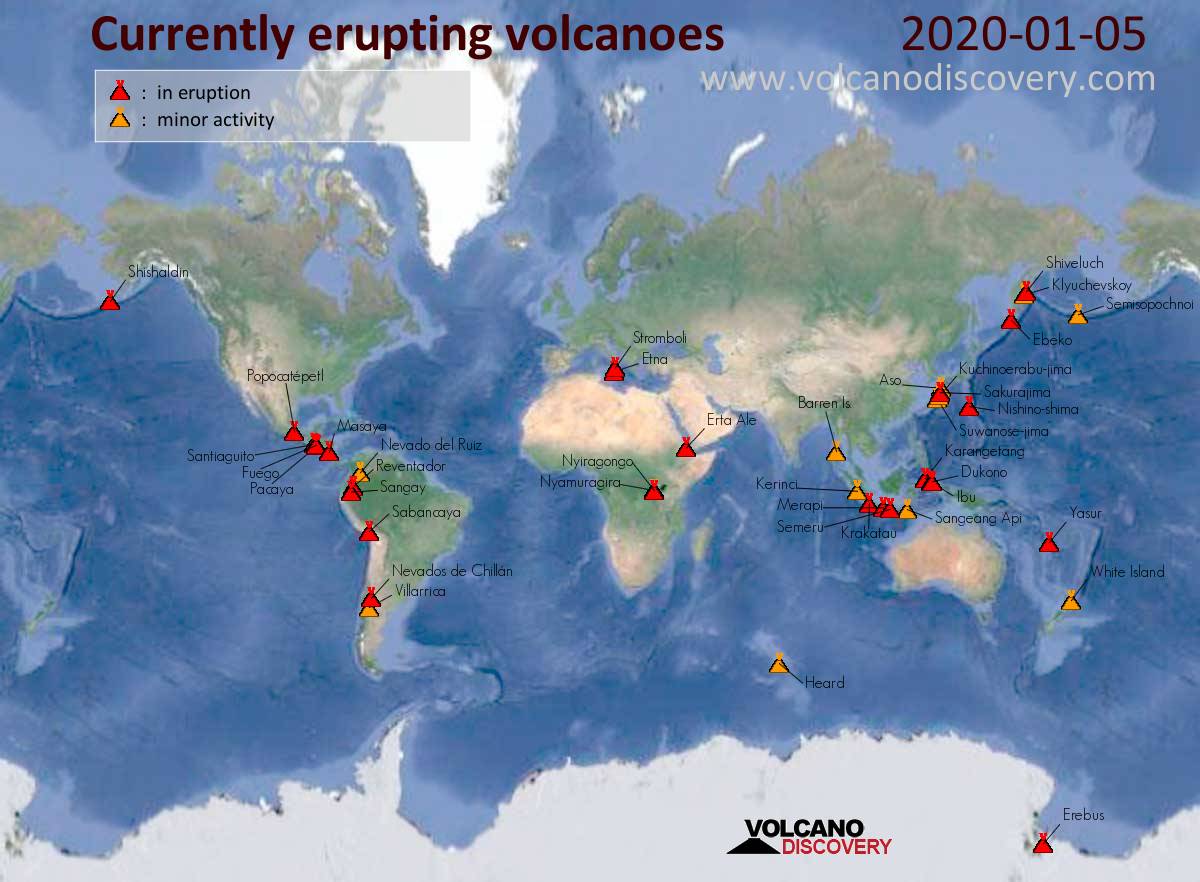 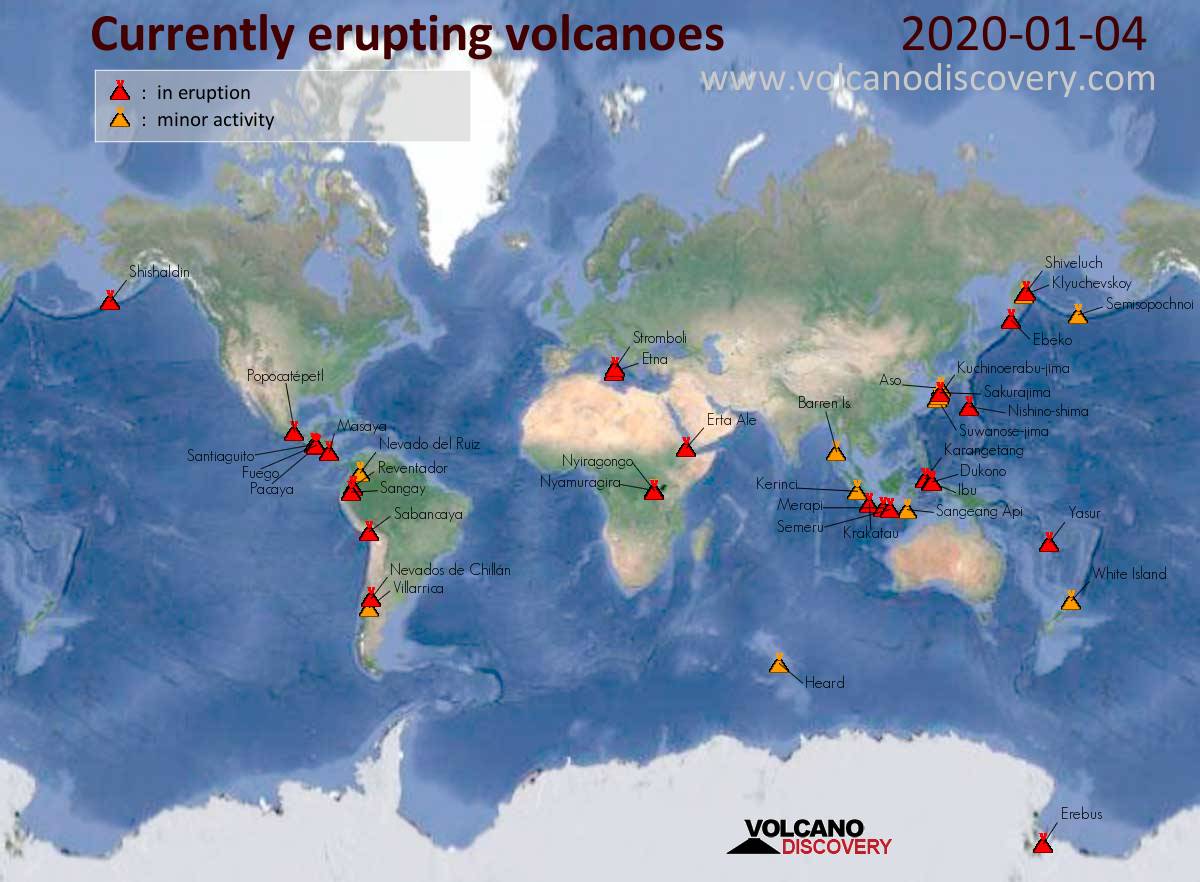 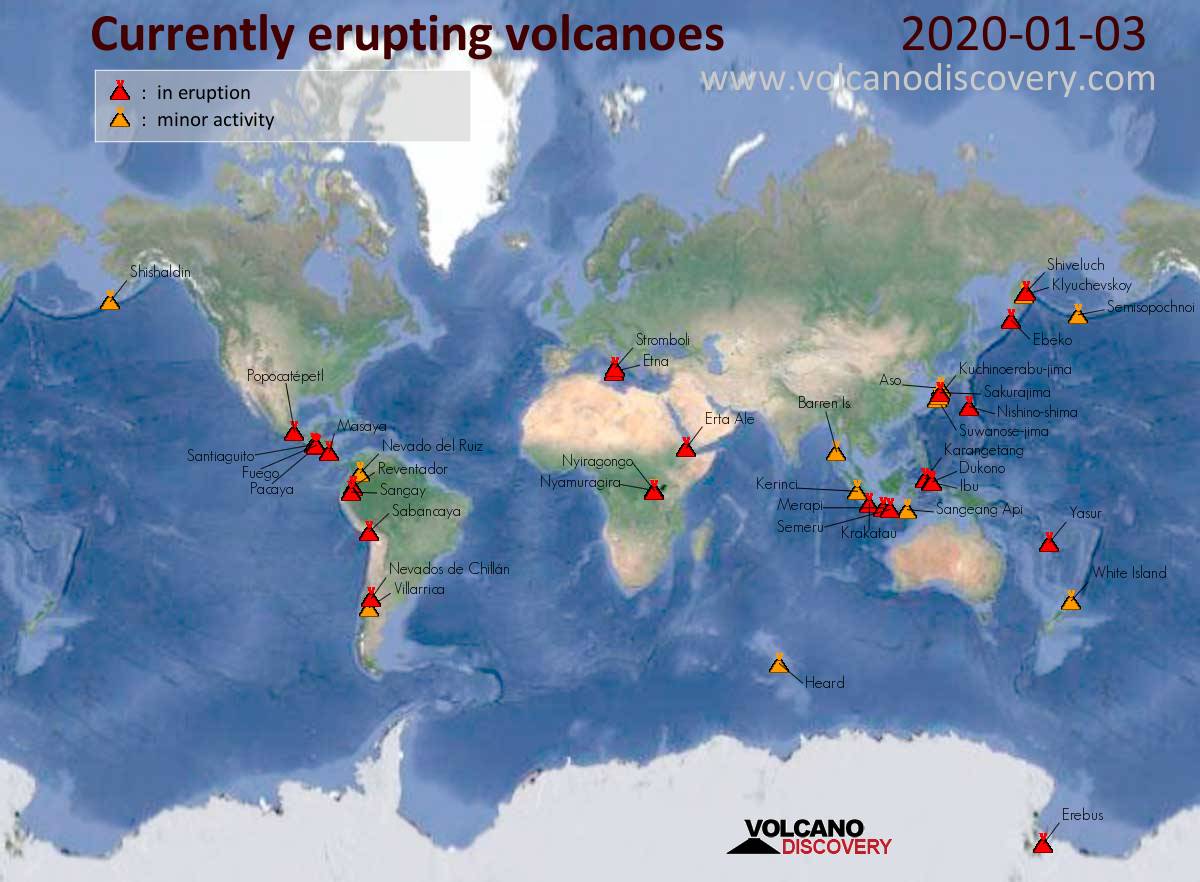 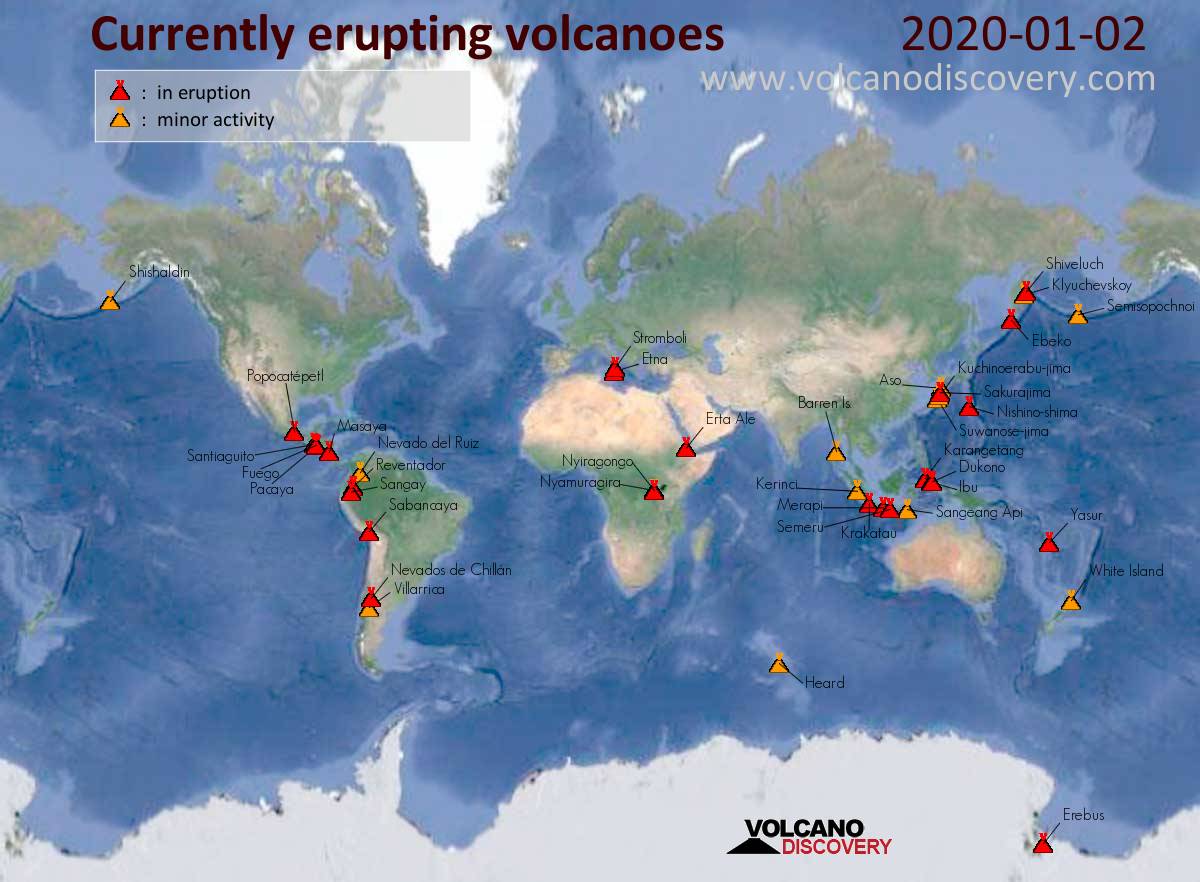 Largest 20 earthquakes past 24 hrs
Our continuously updated worldwide map and list of the most recent largest earthquakes in the world during the past 24 hours.
You can also find top 20 lists for given past days / months / years from the archive.
Eruption Specials

Tours to erupting volcanoes
From time to time, we organize special tours to see volcanoes in eruption. These are often announced only few days or weeks in advance. Find out more!
Kamchatka
4-22 Sep 2022

Fascination Volcano
Discover with us the fascinating natural history of Santorini volcano in Greece on this walking and study tour.
Satellite images

Recent volcano satellite images
Browse quickly through the latest satellite imagery from volcanoes all over the world in order to spot ash clouds and hot spots.
Get the ad-free version!
Why is there advertising on this site?
Support us - Help us upgrade our services!
We truly love working to bring you the latest volcano and earthquake data from around the world. Maintaining our website and our free apps does require, however, considerable time and resources.
We need financing to increase hard- and software capacity as well as support our editor team. We're aiming to achieve uninterrupted service wherever an earthquake or volcano eruption unfolds, and your donations can make it happen! Every donation will be highly appreciated. If you find the information useful and would like to support our team in integrating further features, write great content, and in upgrading our soft- and hardware, please make a donation (PayPal or Online credit card payment).